Ten years ago, on a quiet street in LoDo, Mike and Janet Johnston opened the very first Savory Spice Shop. Now, with 32 stores across the country and counting, they have expanded from recipe cards and cooking classes to debut their Spice to Plate cookbook. We asked them to share how it all came about. 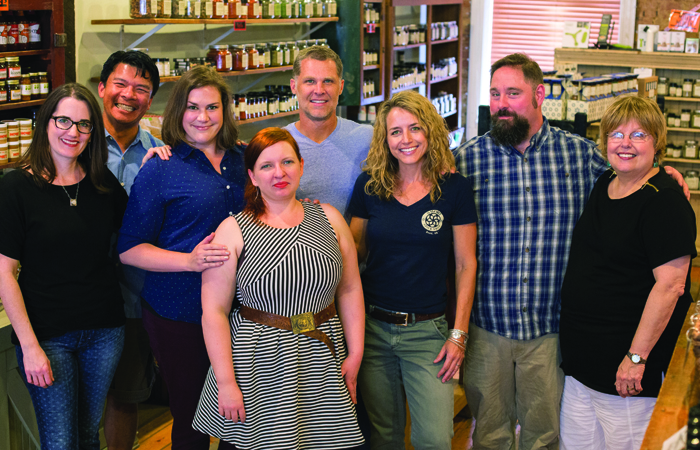 How did the creative process for the cookbook begin?

Mike: The concept for Spice to Plate had been percolating for a while, so it came together pretty quickly after a few internal conversations. We knew we wanted a book that would highlight Savory’s unique seasonings and showcase how to prepare completely different dishes using the same spice blend. The hardest part was narrowing down our 175+ spice blends to end up with ten that represent a spectrum of flavors and are interesting yet approachable. After a couple of brainstorming sessions in front of our spice rack-lined test kitchen walls we were able to narrow it down. From there, we used cookbook-team dinners to keep the creative process going—brainstorming book titles, reviewing design layouts and photos, discussing content, and evaluating recipes.

How did you assemble your cookbook team?

Mike: We wanted our first cookbook to reflect Savory’s personality, so it was important that our employees create all of the content. While Janet and I conceptualized the bones of the book, we put together a creative culinary team to fill in the meat. Five of us, who have regular roles in recipe development, were responsible for creating the recipes. We each chose two of the ten featured spice blends, and then came up with three recipes for each blend. Our creative director managed all of the design and photography. Our test kitchen manager led recipe testing and editing. And longtime employee Stephanie Bullen was the perfect fit to narrate the story behind the blends and recipes since she tasted every dish that came out of the test kitchen.

What did the cooking and testing sessions look like?

Stephanie: Recipe development for Spice to Plate was more of an art than a science, but there was definitely a process involved. For eight months, Savory’s test kitchen became our cookbook headquarters. The first stage involved recipe creation—weeks of in-house testing and tasting, critiquing and tweaking. It’s one thing to develop a recipe in a professional test kitchen but another thing entirely to ensure a recipe works consistently in a home kitchen. So, the second stage involved a recipe-testing program. We assembled a pool of more than 50 volunteer recipe testers across the country. These friends, family, and fans of Savory sent honest feedback, which we tracked in a monstrous spreadsheet. During the third stage we edited recipes based on the feedback. We eliminated recipes that were too complicated and tweaked nearly all of the others. The recipes were prepared once more in our test kitchen before their final photography debut.

Janet: It was fun to witness the behind-the-scenes feats that made our photography look authentic and feel so much like Savory. I rediscovered some antique cabinet doors from our original Platte Street store and we used them as a background for many photos, including the cover. An original painting by Mike that normally hangs in his office served as the ocean-like backdrop for the Tropical Shrimp Cocktail. And the book’s closing photo spread—a pile of dirty dishes—was orchestrated after a big Savory warehouse staff lunch, where everyone was instructed NOT to wash their dishes!

View recipes from their cookbook:

A Wreath-Making Ritual With Helena Bersin

Think Outside the Tree for Holiday Décor This Year

Think Outside the Tree for Holiday Décor This Year

A Wreath-Making Ritual With Helena Bersin

Art That Elevates the Ordinary

4 Wine Openers for Entertaining This Year

Cath Kidston is the Color Queen