She Really Is an Artist

To express is to heal. This is the mantra by which Boulder artist Carin Reich lives and crafts her intense, pop-art-tinged pieces. Decades of creative work as an art director and designer did not give her the oomph she needed to adopt the artist label. It was pain that pushed her to express her feelings in drawings and paintings and prints. 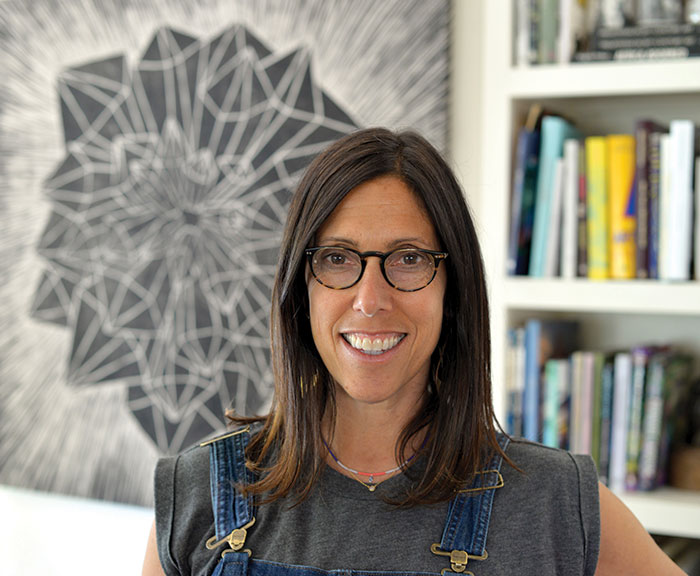 Her most iconic piece, a sharply angled, multifaceted, aquamarine middle finger is the first proof. She drew it up three years ago, after her daughter was diagnosed with Hodgkin lymphoma. “I meditated and made art,” Reich explains. “I had a vision of creating a series called the Crystal Mudras, and the first were geometric middle fingers.” Mudra in Sanskrit is seen as a hand gesture meant to seal intention. Crystals are thought to have healing powers. Raising that crystal-shaped middle finger to cancer was about intention and healing. Her daughter Skye, now age 18, is in remission today. 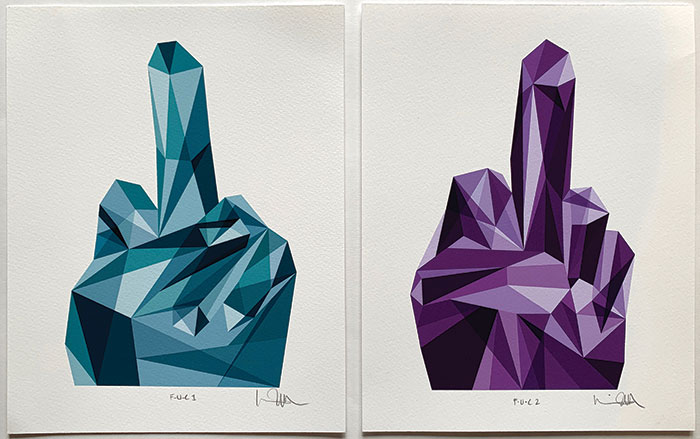 Some of Reich’s pieces radiate with strong colors. Others stay quiet, only to spellbind with organized, layered patterns of shapes—the kinds you survey intently to feel their balance, while still allowing your eyes to dance around the hypnotizing symmetry. Sacred geometry, Reich calls it. 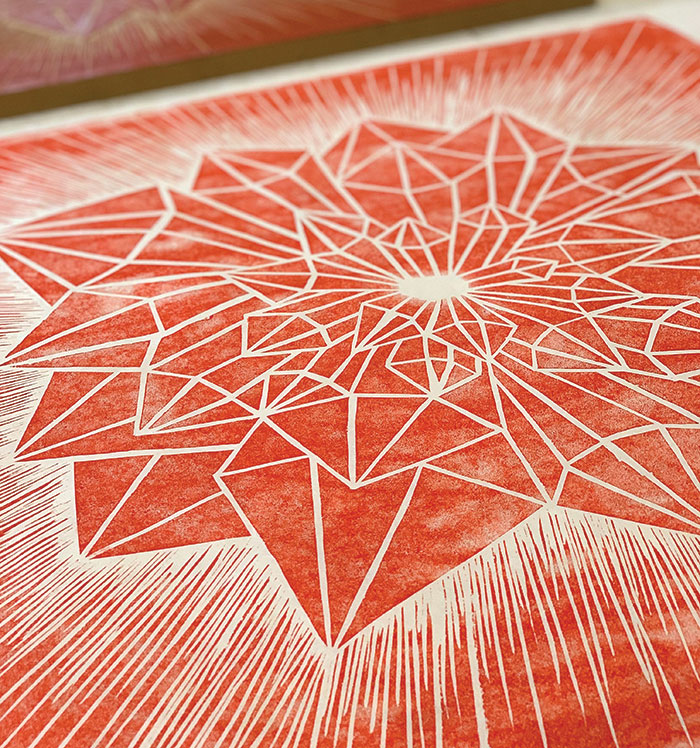 “I love the idea that there could be a structure to everything, a geometric pattern that represents the cosmos,” she says. “This idea has ancient origins, as humans from all different cultures throughout time have had the belief that a god created the universe according to a geometric plan. The study of sacred geometry has its roots in the study of nature, art and architecture, which interests me greatly. Ironically, I took geometry twice in high school. I did not really grasp it from a mathematical perspective, but I love it from an artistic and metaphysical perspective.” 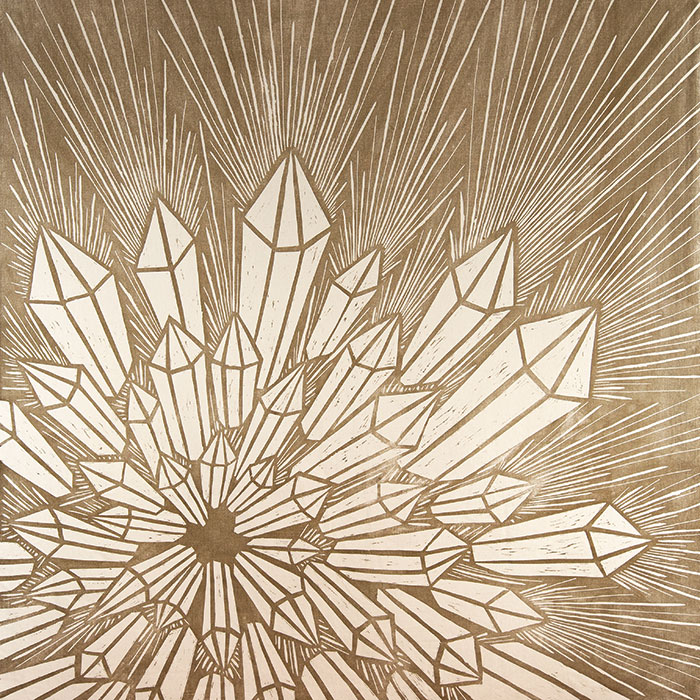 A native New Yorker, Reich attended Boston University, where she received a Bachelor of Fine Arts degree in graphic design. Back in her hometown, she launched a career as an art director, designer and eventually creative director in retail and fashion. She worked with brands and businesses to define creative strategies and brand messaging and took on projects that ranged from advertising and film to packaging and digital media. She was making art but remained skeptical of defining herself as an artist. “I thought of this work as commercial, so even though I was creative, I never viewed myself as an artist,” she explains.

In 2006 Reich moved her family across the country to Boulder, where she became creative director for the Growe Foundation, a local nonprofit, for almost a decade. Then she returned to art direction and design, working with The Kitchen restaurants to launch Next Door and The Kitchen Denver and spending two years as global creative director for the footwear company Crocs. 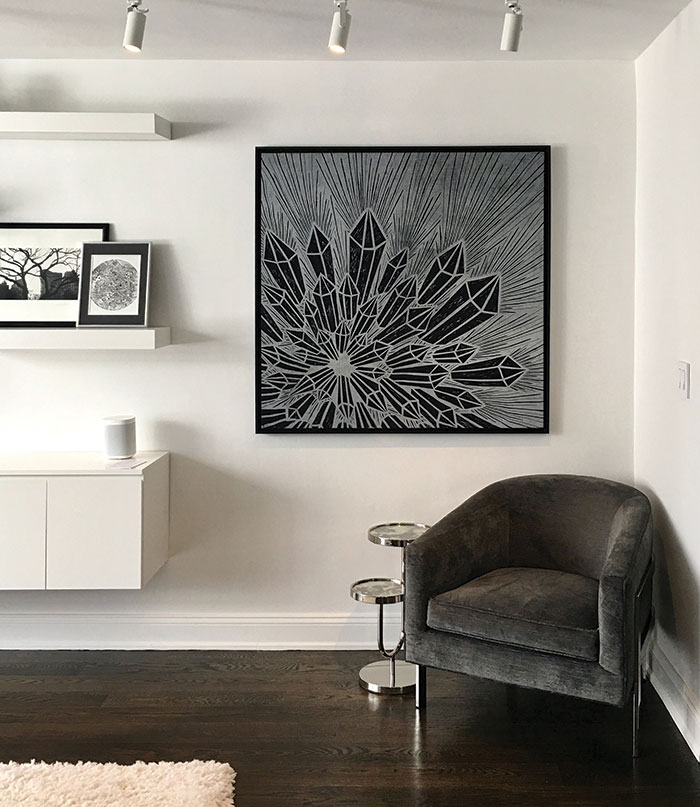 The Crystal Mudras collection marked a definitional shift. “When I realized I was making art for my personal expression, that was a turning point. This happened about three years ago. I was able to call myself an artist only a year ago, and I am still not comfortable with this. Maybe I just don’t like titles,” Reich says.

Reich had been an artist long before this moment, but even reluctantly owning her title allows her to share her creations more freely. “I am inspired by nature, science, divination, evolution, the idea that we are all connected. Symbols, typography. Unseen energetic forces. Pop art and pop culture. Sacred geometry. Patterns in nature. The beauty, perfection and imperfection of nature.” 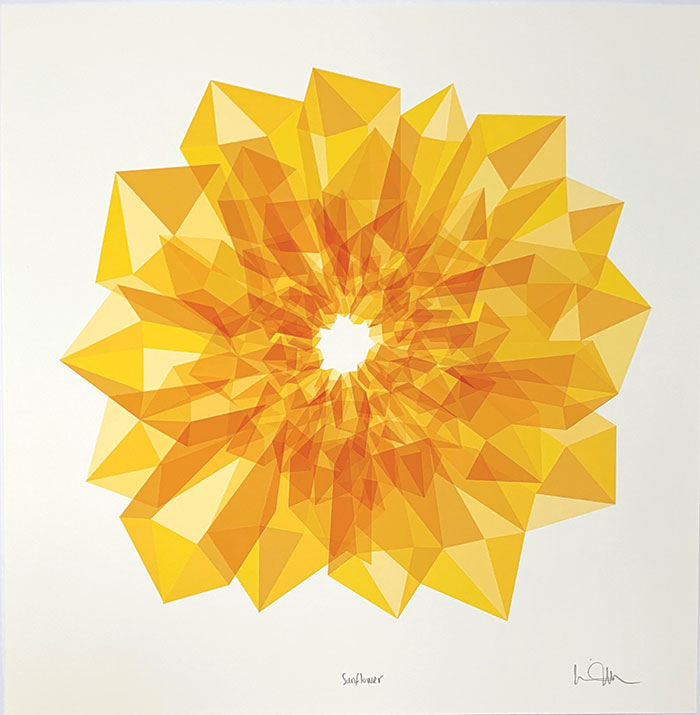 The Crystal Mudras were meant to elicit strong feelings—and they did. They grew into a pop-art-infused political call to action. They became the basis of FLIP, an interactive art installation designed to bring communities together by expressing What Flips You Off? Participants write and draw on copies of an extraction of the original work F-U-Red Blue, mounted on a wall. Reich designed this red and blue middle finger to express her sadness and anger toward the toxic polarization and the U.S. government’s party-before-people attitude.

The other large portion of Reich’s work—woodcuts—whispers gentle order through circular, balanced, angular patterns and magnetic spatial depth. They are like the cool side of the pillow of her artistic personality. The woodcuts resemble urban mandala patterns—perhaps NYC skyscrapers seen from above making up a flower’s petals. 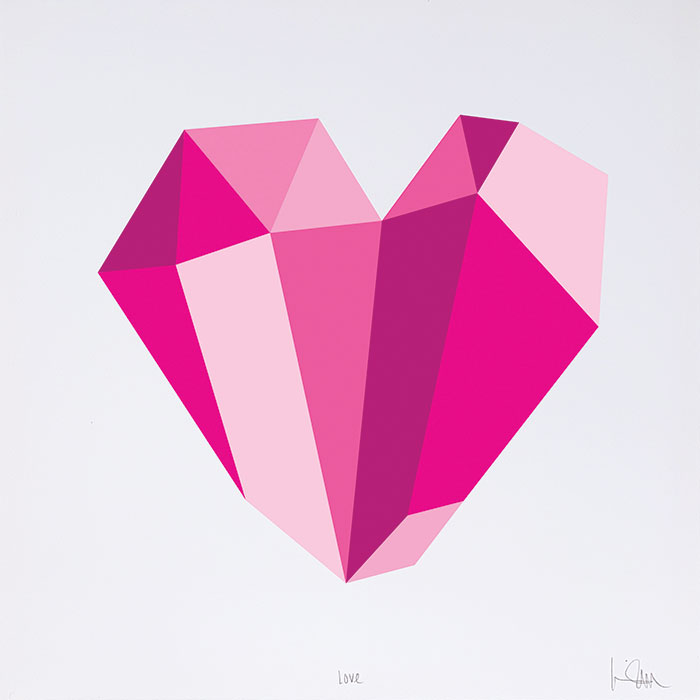 To accomplish this relief-printing technique, Reich first carves the shapes into a block of wood, leaving the printing parts level with the surface while removing the nonprinting parts. The areas she cuts away carry no ink. The carved block then goes face up on a table, with the paper or fabric on top. It is hand-rubbed with a baren, which is a lightweight, hand-held disk.

Her carvings are printed on linen or muslin or paper, and occasionally on canvas. They vary in size from 11-by-17 inches on paper to 48-inch-square prints on fabric. Wood carvings get retired when Reich feels they have lived their purpose, and others emerge. The process is constantly reborn, and the healing continues.

To find Reich’s art, go to carinreich.com, or schedule a visit to her Boulder studio at 13th and Pine Street by emailing carinreich@gmail.com. Follow her at @carinreichstudio on Instagram. In October, Reich will participate in Boulder’s Open Studios artist tour.