Bud Shark is to printmaking what MacGyver is to those other secret agents who couldn’t make a bomb out of a sleeping bag and some vodka if MacGyver gave them the blueprints and loaned them his duct tape. Bud is, in short, kind of a big deal—a master printer whose collaborations with nationally and internationally known artists hang in museums from the Museum of Contemporary Art in Denver to The Met in New York to the Hirshhorn Museum in Washington, D.C.

More than 150 artists have made the pilgrimage to Colorado to work with Bud. Many are painters and sculptors with little experience in printmaking. Their styles range from representational to abstract, from politically charged to whimsically humorous. The commonality? “I’m drawn to artists who have a unique personal vision, often a little out of the mainstream,” he says. “They work primarily in other media, painting or sculpture, but they are all interested in trying to express themselves in the print medium.” 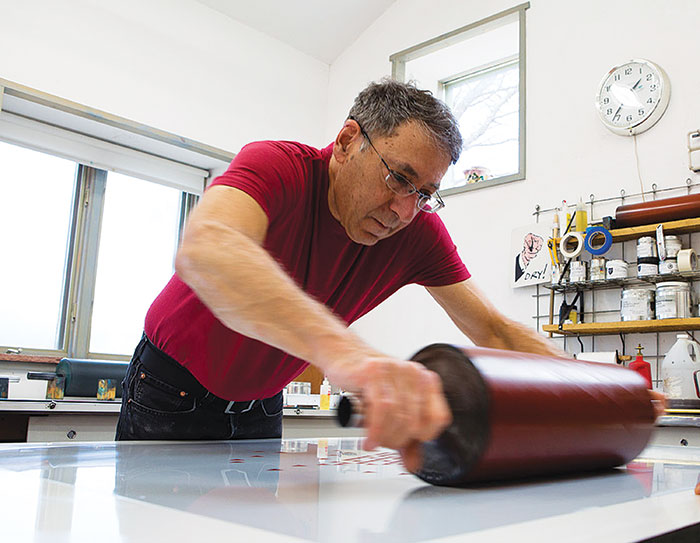 Shark on a roll in his Lyons studio.

And Bud is the ideal collaborator. He fell hard for printmaking while studying at the University of Wisconsin-Madison. “When I [first saw a] lithograph hanging in a gallery, I couldn’t figure out what it was,” he says. “It looked like a drawing, but you could see the image wasn’t on the surface of the paper like a drawing would be. It’s a subtle thing for some. It’s layers of color and the way the ink is in the paper and not just on the paper. I asked, and they said, ‘It’s a lithograph.’ I took a class, and I’ve been printing ever since.” 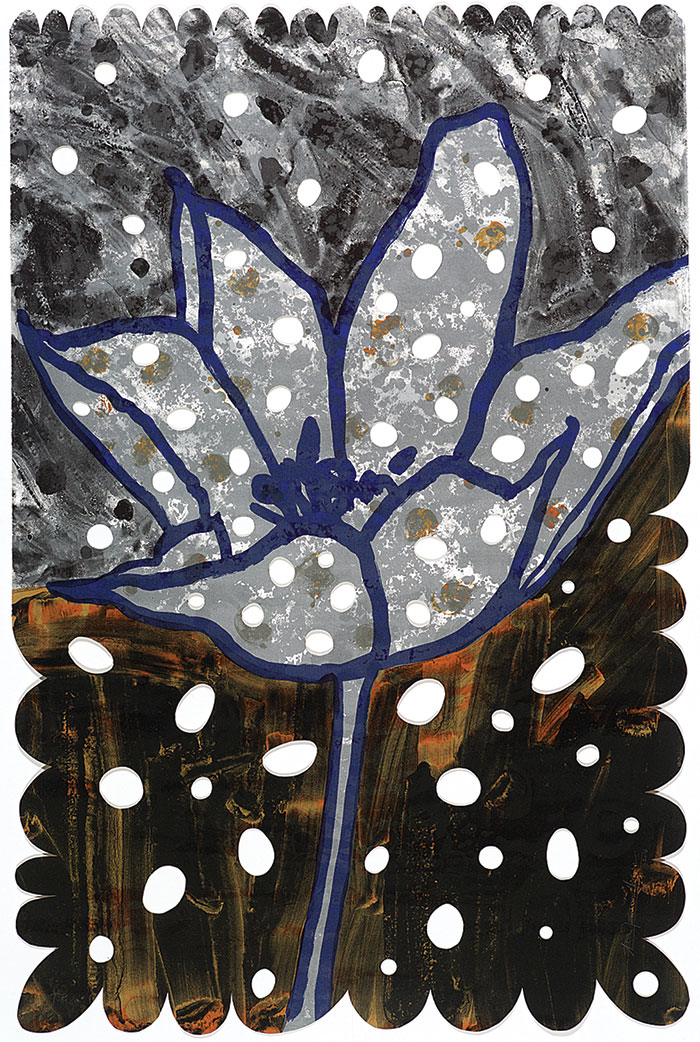 After graduate school in New Mexico, Bud moved to London, where he worked with artists such as David Hockney and Henry Moore. “I was in my 20s, and it was quite an experience, but I burned out.” He, his wife, Barbara (also an artist), and their daughter moved to Boulder to be near Barbara’s family. He opened his studio, Shark’s Ink, in 1976, and in 1998 they moved the family and the studio to a quiet spot a few miles outside of Lyons.

“It’s an adjustment for the artists,” says Bud. “We’re out here on 35 acres surrounded by open space. Some say they have trouble sleeping because it’s so quiet.” The artists stay at Bud and Barbara’s for 10 days to a few weeks while working on their prints, listening to music and eating famously good food made by Barbara. “It’s an intense process,” says Bud. “We’re not interested in doing reproductions of a painting. We may use an artist’s work for inspiration, but we are creating totally new work in the studio.”

“We’re not interested in doing reproductions of a painting. We may use an artist’s work for inspiration, but we are creating totally new work in the studio.” — Bud Shark 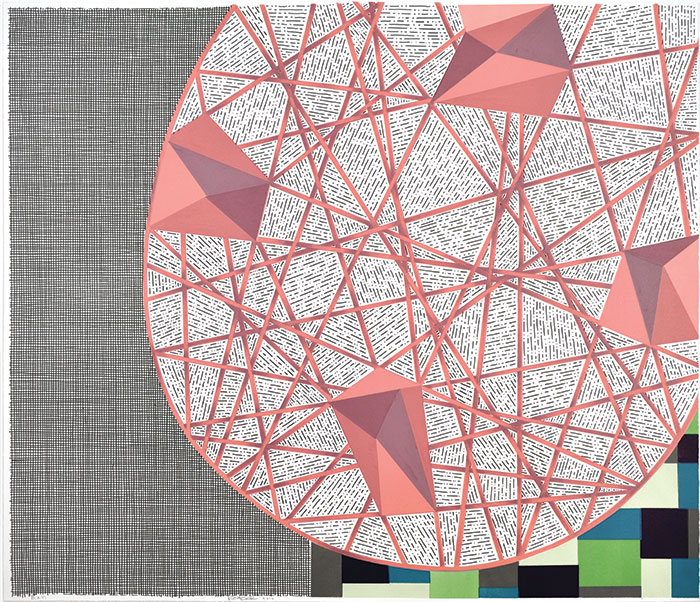 Orbelus (a collaboration with Rodney Carswell)

It’s also a uniquely collaborative process for people who often work in solitude. Bud helps the artists choose the image they’ll work on together and then helps them puzzle out how the print will be made. “We break it down to figure out how many colors we’ll use, what the order of printing should be, what paper we should use, and which inks,” he says. He loves the traditional nature of the craft, making plates, inking them, and then printing (“when I started, we were working on stones to make our prints”), but he has made a name for himself by pushing the boundaries of traditional printmaking. 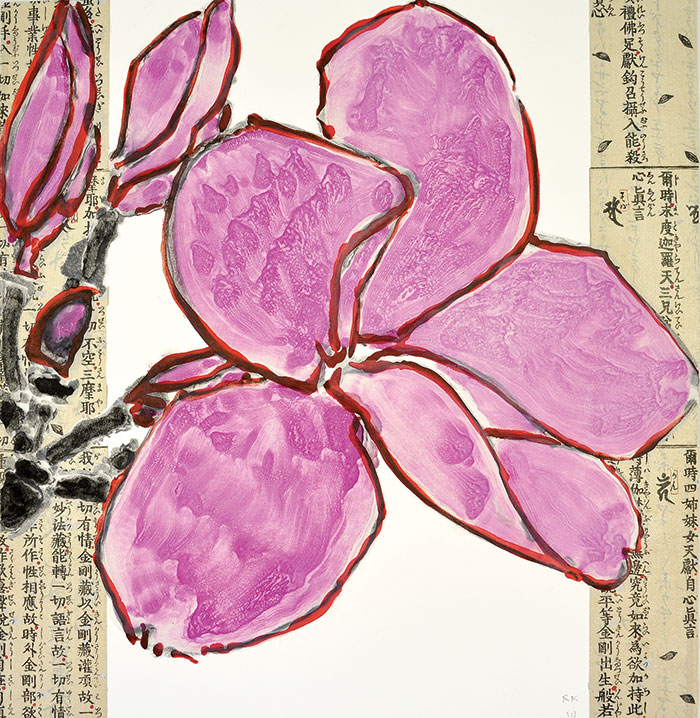 Morning, Noon, Night, a recent collaboration with artist Robert Kushner, might also be called Wow, That’s a Lot of Work. The print, a tranquil study of camellias, blues and branches, is a 30-color lithograph that required 18 lithograph plates, acrylic paints, lithography crayons, gold leaf, tusche (a greasy, black, inklike substance), water, salt, sugar and some Xerox toner powder. “It’s possible for me to get bored doing prints of similar size and process; I like the challenge of figuring out new ways and doing new things,” says Bud. 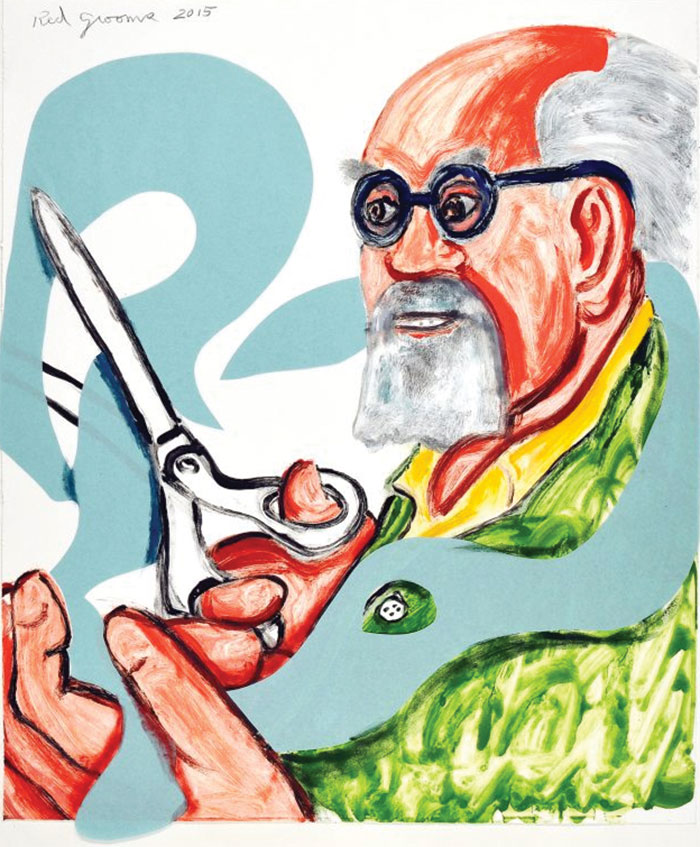 His collaborations with Red Grooms are probably the best illustration of the printer’s drive to expand the limits of lithography. “Part of the reason I wanted to work with Red was the humor and vibrancy of his art,” says Bud, “but I’d also seen some paper sculptures he’d made, and I was really interested in doing cutout, folded prints.” The two have worked together on a number of three-dimensional pieces, including the brilliantly colored, intricately cutout merry-go-round Tennessee Fox Trot Carousel. “Red’s been a terrific collaborator,” he says. “We always think that the pieces are going to be easy, and then we’re like, ‘Oh. How is that going to work?’ I kind of like those challenges. It doesn’t always go smoothly; there is problem-solving and frustration, but most of it is really wonderful. All of the artists I work with are just amazing. I feel so lucky and fortunate to have them as partners and to make the work we do together.”