Sculpting Through the Ashes 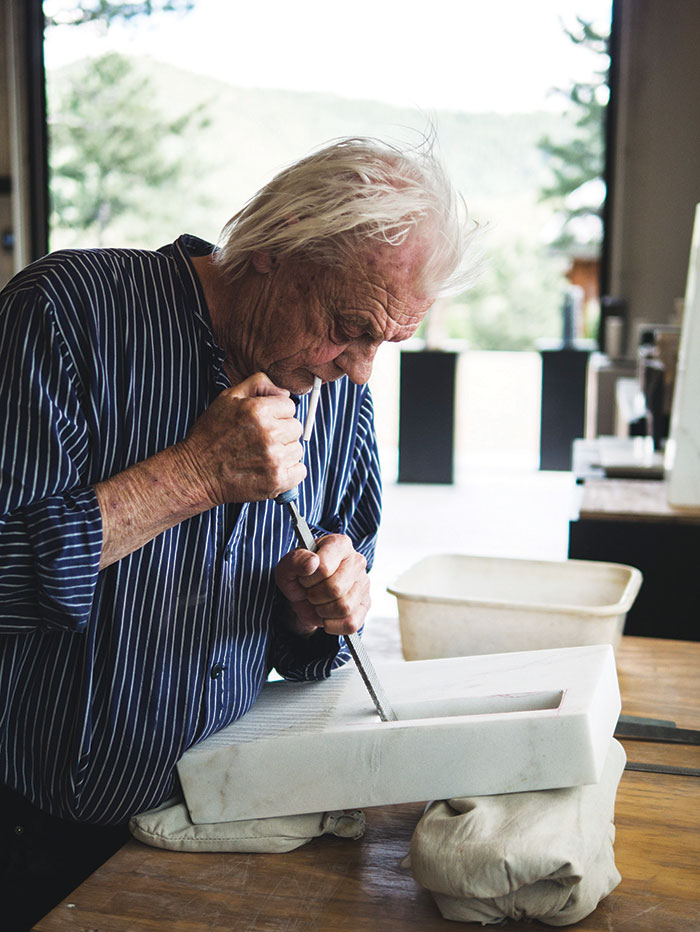 It was a walk through a park in Bremen, Germany, in the mid-1960s that transformed former University of Colorado professor Jerry Wingren into a sculptor. Wingren was on a Fulbright scholarship in Europe completing a Ph.D. dissertation on modern German literature when he came across Kontakt-Kunst, a group that “performed” sculpture out in the open air. He got hooked on carving and never stopped.

With a two-year apprenticeship behind him and fewer academic aspirations, he returned to Boulder as an artist whose medium was stone. It was a smooth transition for the Alaskan-born Wingren, who descends from a family with Scandinavian roots. Large slabs of Colorado marble, steatite, Swedish black granite and alabaster became the canvas of a man who likes quiet order in his art. 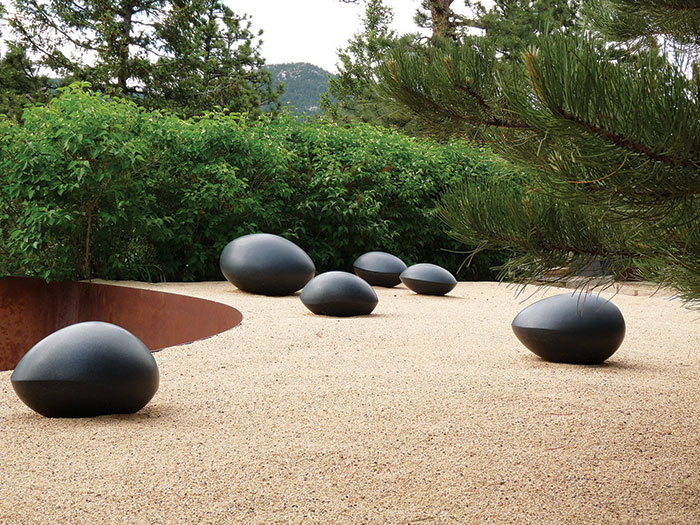 “I am a formalist, not an expressionist,” Wingren says when describing his style. Angles crafted with mathematical precision, curves that soften edges and hard stones, and negative space that lets natural light become part of the final product are staples of his work. Chapters of life and learning mirror the series that make up his portfolio. Each weaves in influences and obsessions, from origami to math, Zen gardens to suspended Native American totems. 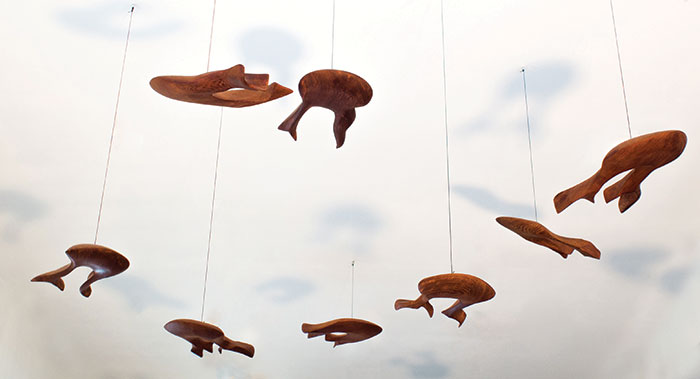 Eight of these series, including two that strayed from stone and forged into metal (Cut & Fold) and wood (Totems) territories, are the pillars of six decades of carving, guided by a fluid creative process. Wingren doesn’t draw, nor does he force the flow of making a new piece. A chunk of marble may rest on his worktable for weeks while he patiently waits for it “to resolve itself.” It isn’t that the stone speaks to him—just that he allows himself the space to find its path.

“It isn't that the stone speaks to him—just that he allows himself the space to find its path.”

This organic way of living and working was rattled when the Fourmile Canyon Fire of 2010 destroyed the artist’s studio and home, and most of his life’s work. As fire embers rained from above on his peaceful mountainside, Wingren packed necessities, adding at the last minute basic tools—a point, a claw, a flat chisel and a hammer—as the words of his teacher Otto Almstadt of Kontakt-Kunst from decades earlier rang in his head: “With these you make everything.” Within 10 days, having to “make everything” again was reality.​

It took five years, a village and a lot of letting go to rebuild his home and studio. The wranglers of the village that helped him rebuild were E.J. Meade and his Boulder-based design firm, Arch11. “We attempted, like Jerry’s sculpture, to offer resistance to the site,” says Meade, whose firm did the job pro bono. “It is pushed into the hill, seeming to hold the hillside up at times.” The form, respectful of the nature around it but not trying to blend into it, takes cues from the folds found in much of Wingren’s work. 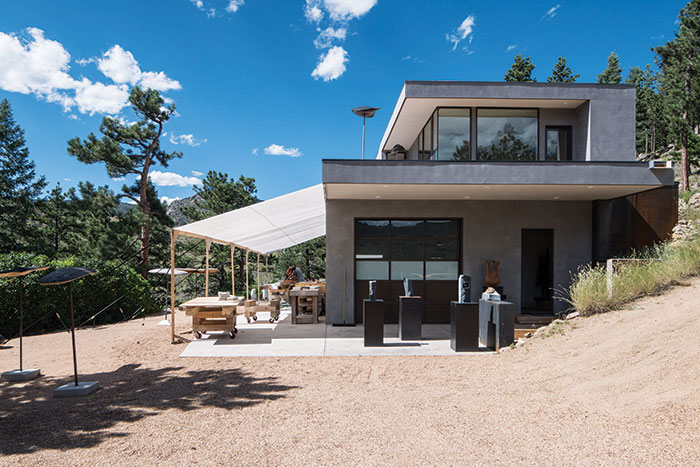 Wingren's home and studio in the Fourmile Canyon.

“It is pushed into the hill, seeming to hold the hillside up at times.”
— E.J. Meade, Architect

A workshop downstairs opens to the south and west to an outdoor studio, where he can carve throughout the day and through the seasons. Twelve-foot ceilings accommodate tall works and a gantry crane, needed to haul some of the heavier and larger pieces. Upstairs, a rooftop sculpture garden and office complement a gallery that opens to expansive views of the surrounding hillsides.

Smooth, cementitious stucco covers the studio’s exterior, “offering a monolithic quality similar to his work,” Meade says. And to be  sure he never needs to start from scratch again, his new studio is now fire resistant. Adds Meade: “I then came home, after the studio was complete, and he had set one of his pieces in my backyard as a thank-you.”

Since the fire, Wingren eased on gallery shows but stepped up the speed of making new art. The Voids, a new series, was born and is now on display in his new space.

Wingren’s work has been exhibited in private galleries throughout the U.S. and Europe, including the Denver Art Museum and the Atlanta Botanical Garden. Part of his Totems collection is now on display at an Art Movement Colorado show at the Boulder Commons through June 12, 2018.

The best way to experience his work is by scheduling a casual appointment (303-545-5233) or visiting during Wingren’s summer-solstice open house on Saturday, June 23, 3 p.m. until dark.

Directions from Boulder: Take Canyon Boulevard to Fourmile Canyon; turn right. After 4 miles, turn left on Logan Mill Road; follow the white triangle signs up the dirt road. Then ask him what the triangles are about.