This 1969 walkout ranch in Denver’s Cherry Hills neighborhood suffered through decades of renovations. The end result was a confusing layout and a perplexing use of rock, stone and brick that crowded important areas, particularly the entryway and living room. “I really didn’t know how to tackle that,” says the homeowner. “That’s why we hired Duet Design Group.” Without the budget for architectural renovations, all of the work was limited to decorative concepts. And because the family of four moved from an 1,800-square-foot New York City apartment to a 4,900-square-foot home, they also needed to purchase decor to fill more than double the space. “They had a lot of original Asian antiques and some beautiful furniture,” says Duet’s Miranda Cullen. “But they needed to be able to add furnishings to make the spaces usable.”

No more hodgepodge. Once the Duet Design team redefined the foyer—which leads to every major living space in the house—by removing rock and adding a glass-and-iron railing, a light, airy tone was set, and the original lines of the ranch grew apparent. To keep an uncluttered, cohesive flow throughout, the team opted for modern furnishings in soothing neutrals while incorporating the owners’ treasured items. Case in point: Salerno dining chairs from Brownstone complement the homeowners’ pedestal dining table (pictured at top of article), and a leather-bound Antrim broadloom wool carpet grounds the look. Bryan Nash Gill’s Cedar Pole woodcut provides a natural focal point and contrasts with Jonathan Adler’s Sputnik pendant, transplanted from New York along with the console.

"After the renovation, the look was authentic to us. It was comfortable, serene and full of our personal treasures." — Homeowner 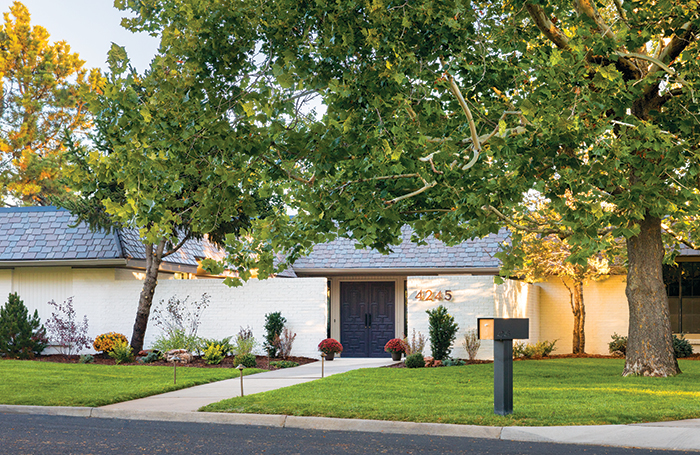 An interior courtyard connecting a few rooms in the house is what initially drew the Korean-American homeowners to the ranch because it reminded them of a traditional Korean layout or hanok. They enlisted the husband’s mother, Sun Kim, an expert gardener from Rhode Island, to design the landscaping for the courtyard and the exterior. Her plan was to add symmetry to the exterior, juxtaposing low elements with a mix of vertical foliage, including upright yews and cistena plums. 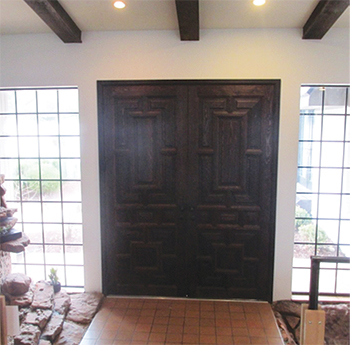 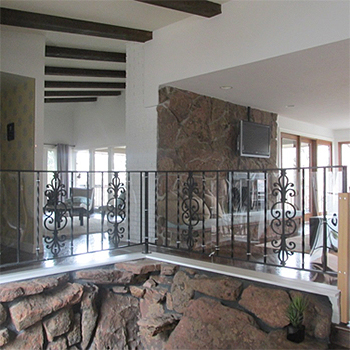 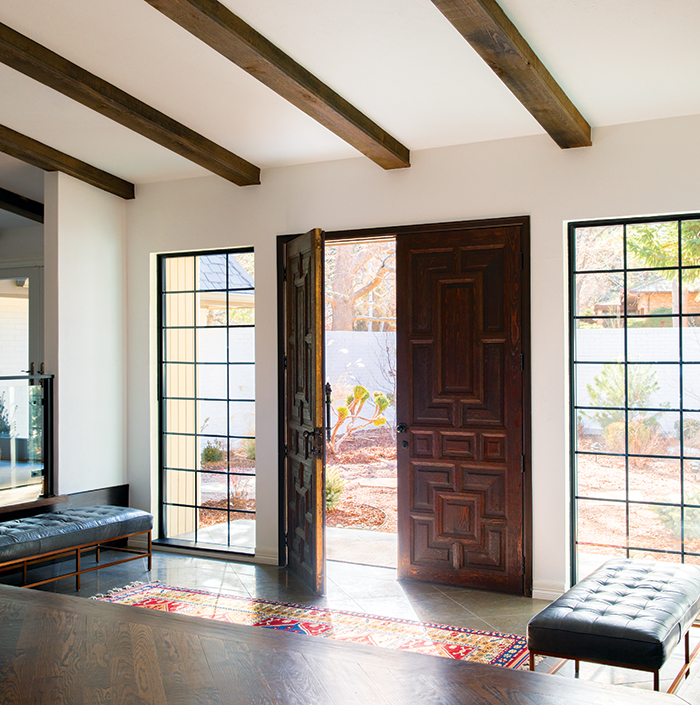 Keeping the eye-catching carved wood doors was a no-brainer. “They have a ton of character,” says Cullen. However, she quickly removed the rock formation water feature, replacing it with large-scale blue limestone floor tiles and adding a planking detail in a dark java finish at the base of the wall. With the kitchen, dining room and living room just steps off the entryway, Duet conceived of the modern glass-and-iron rail to help define the space while maintaining the airy, open floor plan. Midcentury-style leather benches from RH invite guests to kick off their shoes.

“The fireplace mantel was made of rock on one side, and it ran into painted brick on the other side. We made the unit appear more architectural and structurally based by using a material that would wrap on both sides.” — Miranda Cullen, Designer

Arguably the biggest wow factor of the home is the striking wall the design team created in the living room. The tactile oak tiles by Joe Langenauer are married with a glossy porcelain for a sleek look that evokes a midcentury aesthetic while remaining firmly contemporary. Blue leather Milo Baughman-style chairs from Thayer Coggin and the nesting cocktail table by Vanguard coordinate seamlessly with the couple’s existing antiques and sofa. 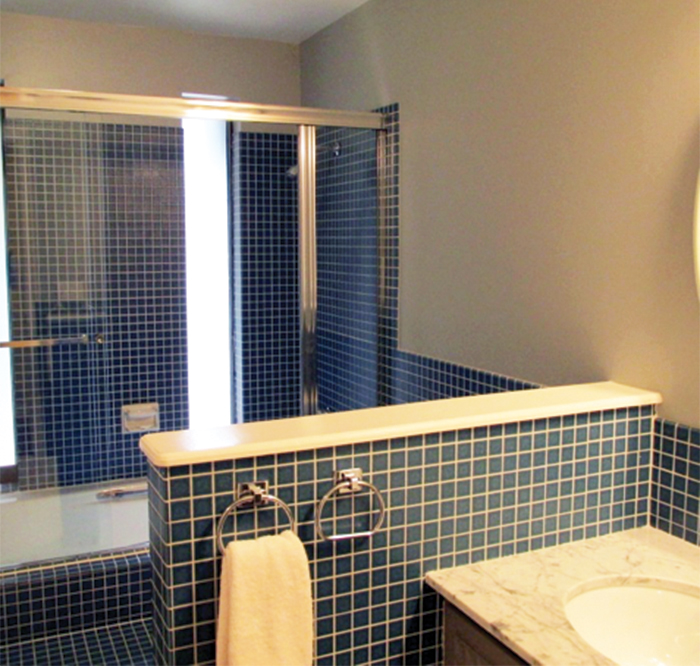 The kids' bathroom before 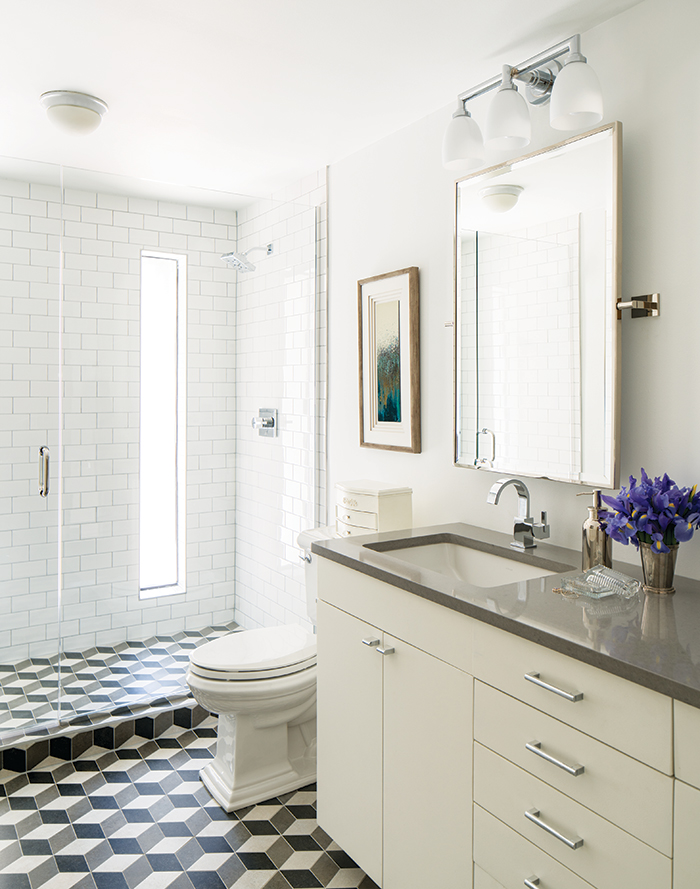 The kids' bathroom after

The kids' bathroom, unlike the master, needed much more than a cosmetic update. “We did a full gut. As the before pictures show, it was pretty bad,” says Cullen, adding that there was significant water damage to the tub and windows. “We decided to do really simple finishes for the countertops and shower tile but wanted the Marazzi mosaic floor tile to give it a little bit of interest and playfulness.” 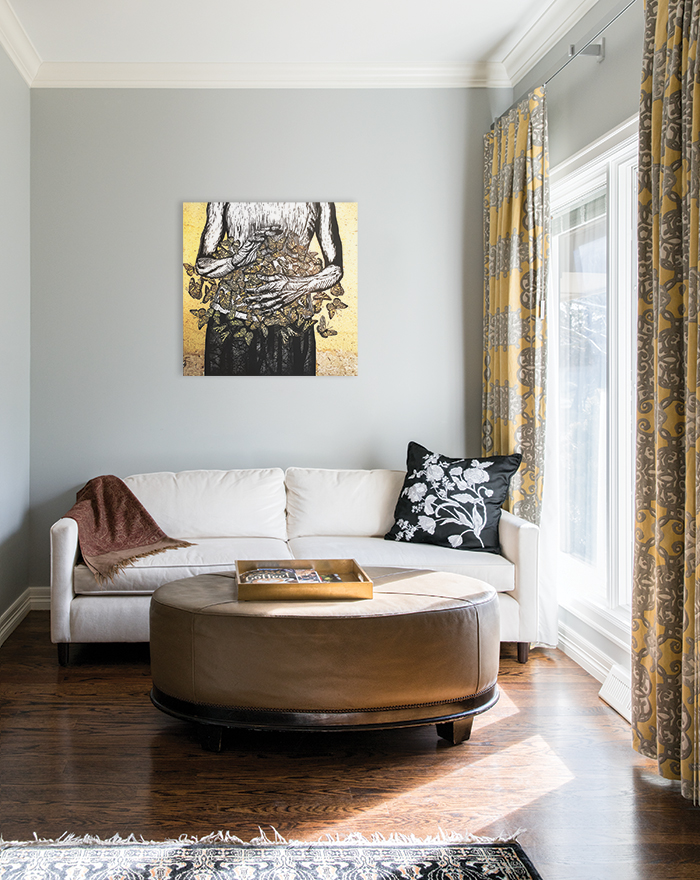 The master bedroom's light-filled sitting area is a favorite resting spot of the family dogs. The oval upholstered coffee table is from Baker Furniture. The painting is Swatting Butterflies by Theresa Haberkorn.