Denver's historic gateway is entering the 21st century with a flourish

The clash and clamor of trains rumbling over tracks and the bustle of busy passengers rushing in all directions is central to the life of a great city, and for the past 133 years the historic heart of Denver’s transportation network has been Union Station.

The original structure, designed by architect William E. Taylor and opened on June 1, 1881 by the Union Depot and Railroad Company at a cost of $525,000, was built from Colorado-quarried stone, with a majestic wooden central tower. It measured a grand 503 feet long by 65 feet wide facing Wynkoop Street, and it was surrounded with park-like landscaping. As railroads flourished, 60-80 trains a day would arrive or depart from the new station. In 1886, Denver’s fully electrified streetcar system was also linked to Union Station.

A fire swept through the depot in 1894, causing extensive damage, including the destruction of the tower. Swift reconstruction efforts produced a lower-profile structure, rebuilt in the Romanesque Revival style with a stone clock tower. That depot served its purpose until 1914, when Denver architects Aaron Gove and Thomas Walsh gave the building a Beaux Arts/Renaissance Revival renovation. The stone tower was removed to make way for a new and expanded central waiting room, complete with eight-foot-wide chandeliers, bronze sconces and elegant plaster arches embellished with 2,300 bas-relief columbine flowers. 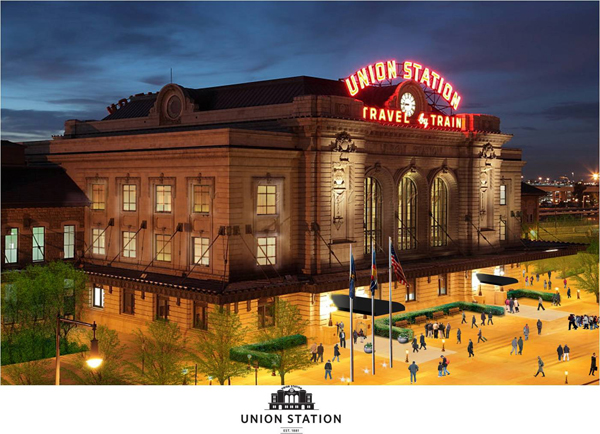 Famous passengers who stepped onto the platforms over the years include Presidents Teddy Roosevelt, William Howard Taft, Franklin Delano Roosevelt (along with Eleanor, the First Lady), and Harry S. Truman. Many thousands of servicemen and women also passed through Union Station during World War II.

Rail travel dropped with highway construction and auto and airplane popularity. Despite the addition of a jaunty red “UNION STATION TRAVEL by TRAIN” sign in 1952, the historic depot faced decades of decline. But in 1969 the newly-formed Regional Transportation District (RTD) began to rethink the station as a regional hub for a new era of light rail and bus in addition to Amtrak. The building was named to the National Register of Historic Places in 1974. Since the mid-2000s the grand old station has been the focus of an ambitious redevelopment initiative, set to bring back the old clamor and bustle, only this time with an exciting new array of shops, restaurants, apartments, offices and a hotel, all slated to open in July. unionstationdenver.com

This article appears in the June-July 2014 issue of Colorado Homes and Lifestyles.
Categories: Colorado Destinations