Design Objective
“My husband wasn’t coming to Aspen as much as he had been, and our traditional home needed a redo,” says Paige Weinberg of their decision to downsize from a 4,000-square-foot, traditional, log-and-beam home in Aspen to a 965-square-foot condo within walking distance of the gondola. “I didn’t want to move at first. I wanted to keep my big house. But now that we’re done, I wouldn’t go back to it at all.”

The couple hired CH&L Circle of Excellence 2018 winner Barbara Mullen to design the space, tasking her to check off the following: It needed to be beautiful; workable for the couple, their visiting grandkids and their dog; and suitable for entertaining. “Barbara figured out how to make every space functional and conducive to the way we live,” says Weinberg. “It feels so much more comfortable than our big, old house.”

Execution
One of the first decisions they made was to transform one of the three bedrooms into Weinberg’s closet. They chose the one on the upper floor and made the two on the bottom floor the master and guest suite. “I always feel like you’re getting ready to go places in Aspen, to dinner or to see music, so I made it what I wanted for me,” Weinberg says.

The kitchen was perhaps the biggest challenge, because the Weinbergs needed space to entertain. Mullen, along with architect Richard Mullen (who happens to be Barbara Mullen’s ex-husband), suggested they move everything except the oven along one wall to create room in the center for a combination dining table, island and countertop. Then she truncated the backs of two of the stools, so they would slide seamlessly underneath the counter-height table, which is topped with a slab of the same Caesarstone quartzite as the counters. “We opened the space up in a whole new way that they didn’t know could happen,” Barbara Mullen says.

The color scheme was of utmost importance: Weinberg wanted to keep things open and light, so Mullen went with light-oak floors, walls and cabinets throughout the house, which unified the rooms and made the whole space feel bigger. “We kept the color palette very consistent. I think it’s important in a small space, because it makes the rooms flow,” she explains. To add interest and detail, she employed layered and textured fabrics in pillows, draperies and furniture. “We used patterns sparingly,” she says. 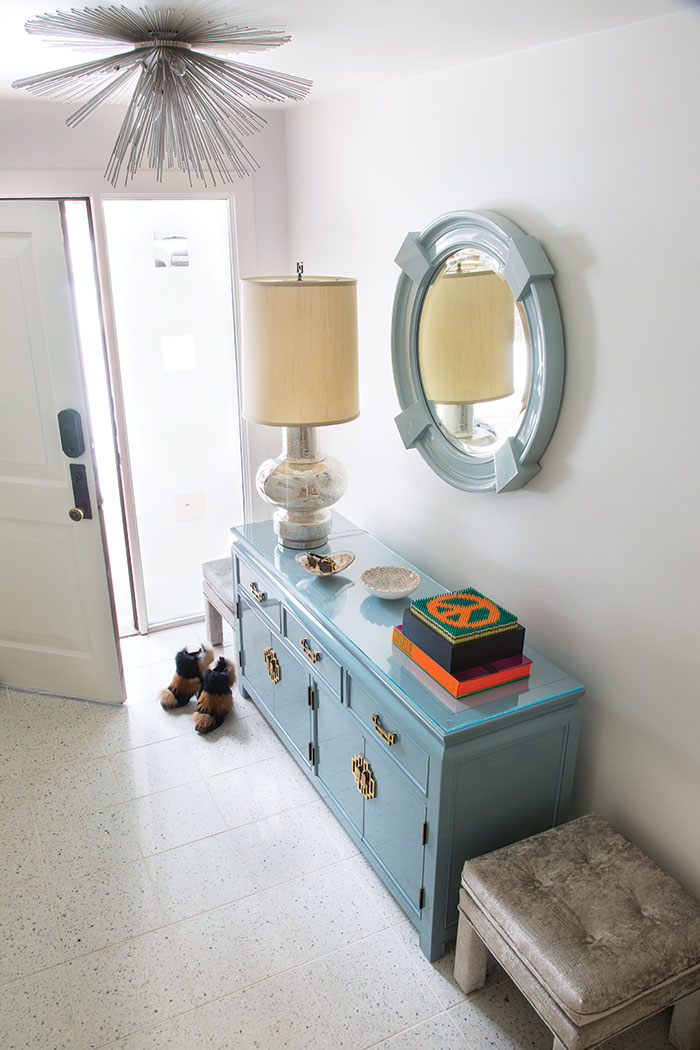 The entry immediately sets the tone for the home. The walls throughout are painted in Alabaster by Sherwin-Williams, which creates a clean, airy feeling. The chest is a repurposed antique Weinberg bought from Scout Design Studio, custom-lacquered in Mediterranean blue for an infusion of color. The mercury-glass lamp, which Weinberg found at Paris Underground in Aspen, adds a flash of glamour, while the terrazzo tile speckled with whites, blues and grays ties it all together. “Paige is so creative and fun,” Mullen says of the homeowner's accessory choices. 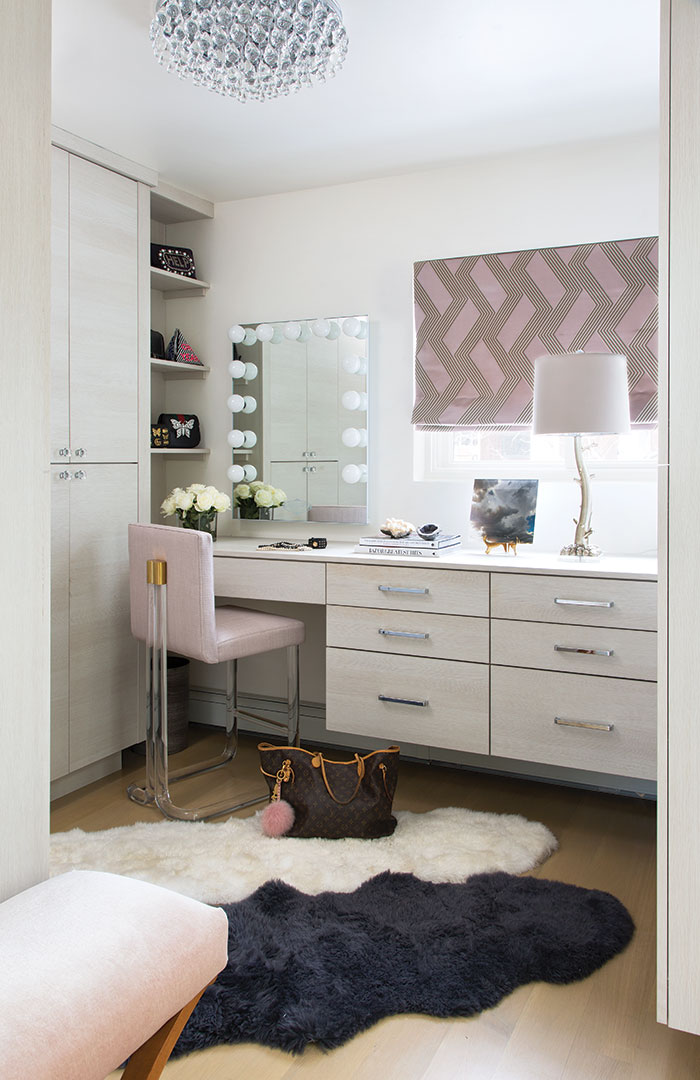 This is a fun, feminine space,” Mullen says about Weinberg’s closet and dressing room. A sheepskin rug creates a luxurious warmth that connects to the mountain surroundings, while the acrylic and brass Scout Design Studio chair—upholstered in waterproof fabric—elevates the space to opulence. The Vanity Girl Hollywood mirror is a tip of the hat to the glamorous dressing rooms of yore. “I ordered that mirror on Amazon,” Weinberg says. “The lighting adjusts. It’s a great lighted makeup mirror.” A silk zigzag Sahco fabric shade from John Brooks Inc. in Denver adds the final touch. 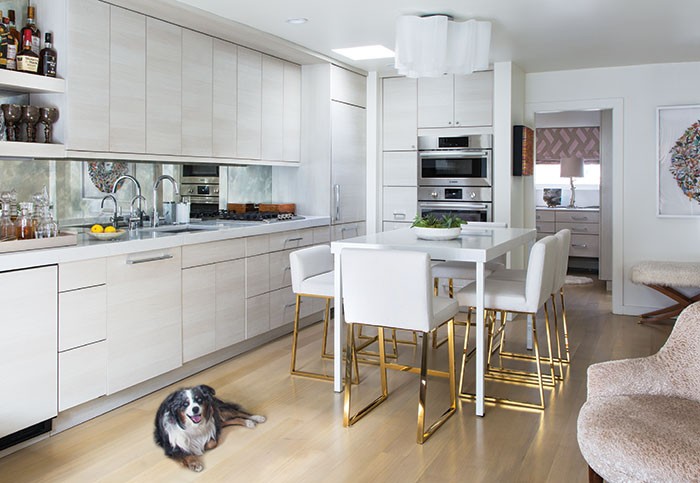 The bar, counter, sink, dishwasher and range are all on one wall, creating a wide-open space in the center for the multiuse table/island/auxiliary countertop. An antique mirror on the backsplash creates the illusion of space. The pale cabinets are textured to give them a rustic feel, while the wavy-glass Artemide chandelier offers a modern, organic touch. “The ceilings are pretty low,” says Mullen. “We were challenged with that.” The retro brass stools, from Scout Design Studio in Dallas, mix with the chrome cabinet pulls and stainless-steel appliances. “Some people think you have to match all your metals,” Mullen says, “but I think it adds character to a space.”

“It feels so much more comfortable than our big, old house.”
— Paige Weinberg, Homeowner 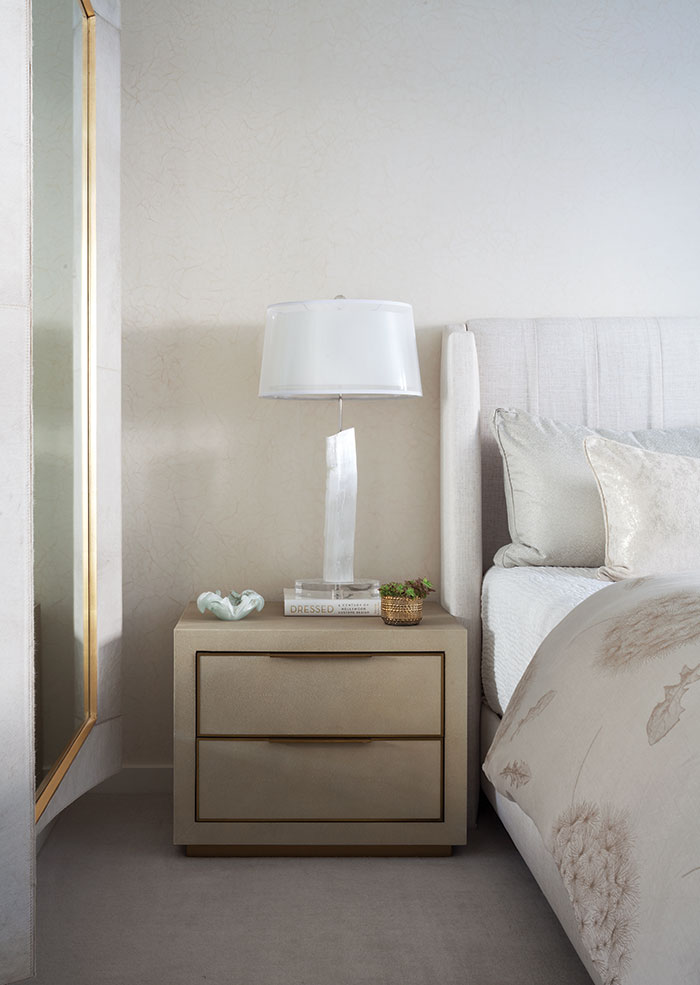 Mullen continued with the same color palette in the master bedroom, so each room flows into the next. She chose to lay carpet in the bedrooms for warmth and used the same light-oak tones in the Restoration Hardware night tables. The pop of brass on the mirror and the slightly shimmery pillows parallel the other accents throughout. “Because the bedrooms are on the bottom floor, it gives us a lot of separation, despite the small space,” Weinberg says. “I stay up later than my husband, so if he goes to bed, it doesn’t bother him.” 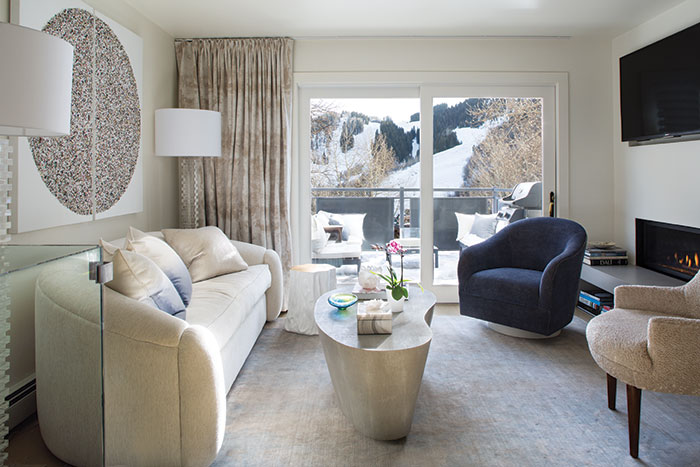 Soft, natural shapes imbue a flowing feeling, providing instant coziness. Mullen chose versatile furniture, with one lightweight chair that homeowner Paige Weinberg can move around as needed, and one that swivels, so her husband can watch either TV or the sunset. “He is a big griller and cocktailer,” Weinberg says, laughing. “We did this whole area for him, so he barely has to move between the TV, the built-in bar and the grill.” The drapes—floor-to-ceiling to make the ceilings feel higher—are made from Coraggio fabric. Small, easily movable drink tables that resemble tree trunks came from Weinberg’s previous home.