MARKET PROFILE:
In January 2008, the Arrabelle at Vail Square—a luxurious new hotel and condominium development by Rock Resorts—opened to much fanfare at the base of Lionshead in Vail. Its lavish, Old-World décor and high-end sticker price was celebrated at the time as a triumph for Vail, which had been criticized for its aging 1970s-era architecture. What’s more, the shiny-new Bavarian palace seemed to epitomize the nation’s pervasive sky’s-the-limit attitude towards real estate. Sales at the Arrabelle in 2008 (totaling nearly $300 million)—coupled with the sales of other new, high-end properties like the nearby Westin—contributed to the highest ever sale-price average per property in Vail real estate history: $2.5 million.

Of course, we now know that it was all a little too good to be true. In September 2008, when the nation’s economic bubble officially burst, home prices in Vail plunged right along with prices in the rest of the country. As of August, the average sale price for a piece of property in the town of Vail had dropped well below 2007 numbers, to $1.5 million, according to data compiled by Land Title Guarantee Company, a Vail-based title insurance firm.

That may be bad news for the market, but it’s great news for buyers, says realtor Michael Slevin, Vice President of Prudential Colorado Properties. Great news, that is, if buyers were actually taking advantage of the (relative) rock-bottom prices. Citing data from the Vail Board of Realtors, Slevin says that in terms of volume, property sales in Vail for 2009 are the lowest they’ve been since 1992, when the board first started compiling data. The indication? Buyers are still gun-shy from the recession.

“There will always be interest in our market,” says Slevin, pointing to the mountains, skiing and myriad other reasons why someone might want to buy
in Vail. “The challenge right now is finding an equilibrium—a price that is low enough so that activity will increase again. Buyers are still feeling out where the bottom is.” Which is an entirely reasonable reaction, according to realtors like Carroll Tyler of Slifer Smith & Frampton Real Estate. “Prices were too high to begin with,” she says. “We needed a price correction.”

And therein lies the silver lining. Both Slevin and Tyler say now is the time to buy in Vail. There is a surplus of motivated sellers and a surplus of inventory. Plus, with three new-construction projects slated to hit the market in 2010—The Ritz-Carlton Residences, Vail; Four Seasons; and Solaris (see more info above)—buyers can demand more for less with Vail’s older properties. “Sellers in Vail today are realistic,” says Tyler. “There are some very good values to be found right now.” But it won’t last forever.

HOT PROPERTIES:
Watch for these three new developments, slated to hit the Vail market in 2010. 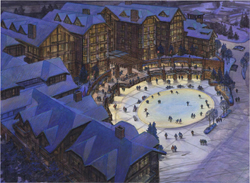 This article appears in the November-December 2009 issue of Colorado Homes and Lifestyles.
Categories: Entertaining, Exteriors, Stylemakers