To call Megan and Nick Wilder “outdoor enthusiasts” is a bit like saying Al Gore is curious about global warming. The Wilders are skiers, snowboarders, mountain climbers, kayakers and hikers. In fact, it’s hard to find an outdoor sport they don’t enjoy. So it makes perfect sense that when they moved to Boulder from San Francisco a few years ago and decided to build a home, they chose to protect as much of the environment as possible in the process.

“Environmentalism is my main issue; it’s what I care about,” Megan says. “This is the first time we were able to live in a house that reflects those values.”

The Wilders’ journey began with a search for the right team. Megan turned to the Colorado chapter of the Green Building Council for a list of green architects, and after interviewing several, the Wilders chose Boulder-based Harvey Hine, who recommended Cottonwood Custom Builders’ Jeff Hindman to head up the construction. 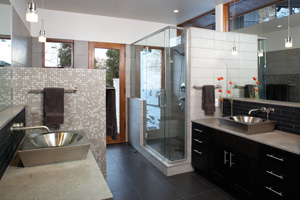 Much like the rest of the home, the master bathroom  has an earthy, contemporary design that makes good use of natural elements and colors. The bath achieves a clean look with a rich collection of different materials.

When Nick and Megan bought this piece of land, an uninspired 1970s house sat where their contemporary home now stands. Instead of demolishing the house, Hindman and his team deconstructed it, recycling everything they could. “They didn’t use anything bigger than a hammer,” Nick says. “There was a lot of high-quality raw material—timber beams and a huge mossrock fireplace, for example.” The Wilders donated most of the materials to ReSource, a non-profit salvage warehouse in Boulder. “Deconstruction costs more than demo, but when we took into consideration the tax deduction, it was a reasonable price,” says Nick, adding that the cost was less than 1 percent of the project cost.

Despite its less-than-lovely former dwelling, the property is a gorgeous spot on a hillside that adjoins open space. Hine  and his colleague Cherie Goff designed the home to draw as much of the outdoors into the rooms as possible. “We wanted a home that fit into the natural topography” Goff says. “We wanted one that would really reflect their lifestyle, which is connecting to the environment.”

The Wilders and their team made an important design decision right from the start: The 3,700-square-foot home would be passive solar, which means its placement on the site would take full advantage of the sun’s radiation to heat and light the home. To that end, all of the major rooms—the living room, kitchen, master bedroom and office—have south-facing exposures. “In the summertime, we only have to use lights 2-3 hours a day,” Nick says. And in the winter, the sun warms the air, which then heats the large limestone wall that stretches along the kitchen and living room, from the front door to the back patio. At night, the stone reheats the air, which reduces the Wilders’ dependence on natural gas.

A stroll through the Wilders’ home reveals a healthy marriage of style and eco-friendly products. For example, Nick and Megan love the way tropical hardwood looks, but they wanted a sustainable alternative, so they opted for wood floors made from recycled railroad ties in Thailand. “You can even see where the holes from the railroad spikes pierced the wood, which we love,” Megan says. All of the lights in the house use LED, CFL or halogen bulbs in lighting fixtures that suit the home’s design. And even the landscaping is green: Low-water grasses and native plants surround the home’s patio area, alongside rocks found on the property.

Much of the home’s eco-friendliness is built into its infrastructure. In the summer, a photovoltaic system on the roof generates almost twice as much energy as the home needs, so Xcel Energy buys the Wilders’ excess power. In the basement, an energy-efficient system called a Coolerado (manufactured in Arvada) works like a grown-up swamp cooler, chilling the air and then sending it through a heat exchanger to remove much of the moisture. Hindman’s team installed low-e windows filled with argon gas and then used non-toxic foam insulation called icynene to ­minimize air leakage. “It’s edible,” Megan laughs. “Not tasty, ­necessarily, but edible.”

All of the small decisions the Wilders’ team made led to a home that embodies their vision for a space that celebrates and protects the earth. “My favorite part? The environment around us. I feel like I’m always outside,” Megan says. Mission accomplished.