Of Cowboys and Color Fields

For as long as there have been cowboys driving cattle, there has been Western Art—much of it residing safely in the Realists’ camp

Denver artist Duke Beardsley approaches the genre with his own contemporary spin, dropping rugged, anonymous cowboys and their trusty steeds into fields of vermilion, amber or indigo, where they rope, ride, brand—even check their cell phones. Beardsley, a fifth-generation Coloradan who spent much of his childhood at his family’s Douglas County ranch, explains his boldly modern approach to the West’s most beloved icon.

CH&L: Your studio is fantastic.

Duke Beardsley: Thanks. I love it. We built it about six years ago. Sometimes, I need to paint late at night, and we have two girls, so it’s good to be close to home.

Are your daughters artists?

Yes, as all kids are. We have one who is a Realist and one who is an Abstract Expressionist. Go figure.

I teach [painting to] kids here, kids who show promise, whose teachers pull them aside and say, ‘You have something special.’ Those kids find their way to me. A few of my students are now teenagers, and I’m seeing them edit themselves, and I try to fight against that. I say to them, ‘No matter what the forces outside this studio say, what do you feel here and now, in this place?’ It’s good for all of us. 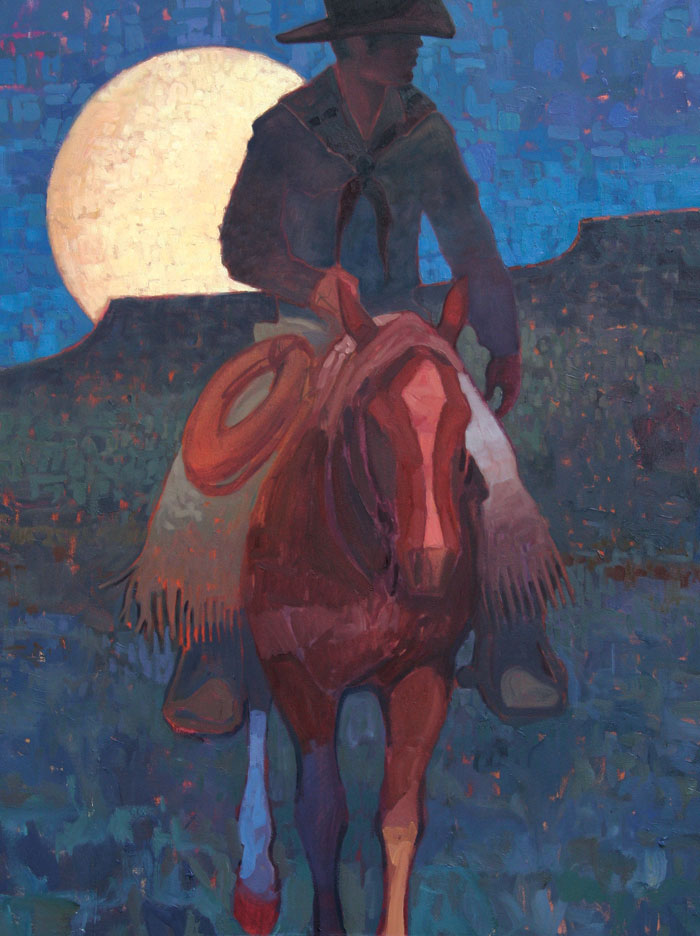 Speaking of young artists, when did you realize you could make art a career?

I had planned to stay in California and work in the entertainment industry after attending art school in Pasadena, but just as I was finishing school, a gallery got a hold of me and said, ‘Let’s have a show in Denver.’ I thought, ‘An art show, how fun! Let’s try this for a summer!’ Now it’s been 15 years.

There were other moments. When I enrolled in art school [after earning a degree in art history from Middlebury College and taking some pre-med courses at Claremont College], a dear friend of mine from Denver said, ‘Did you hear the collective sigh of relief from our friends when you went to art school?’ I guess they saw this impulse in me before I acknowledged it.
The truth is that any time an opportunity to show my work popped up and people responded well, it felt like an ‘aha’ moment. The acquisition [of Against the Bit and Burnin Rubber in 2008] by the Denver Art Museum was huge for me. I spent so much time thinking, ‘Don’t screw this up!’ that I hardly believed it. I still go into the museum and see those pieces and think, ‘This is so cool!’ I never take anything for granted. I have to get up early and keep painting. I try to honor [this work]. I’m grateful for it. 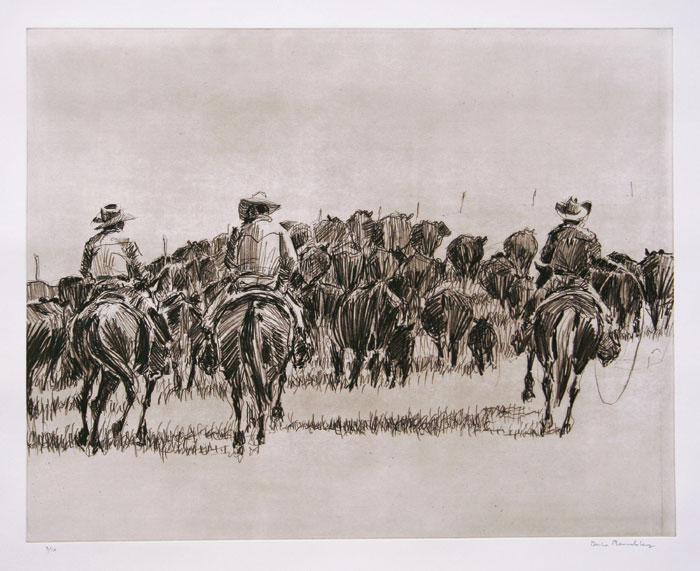 Your work puts a distinctively contemporary and colorful spin on Western motifs. Where does that modern impulse come from?

I grew up with an IV of Charlie Russell and Frederic Remington in my arm. Apparently, when I was very young, I told my mom that I wanted to meet Frederic Remington. I was devastated when she told me he’d been gone for decades. I had a book of his, and the stories connected to me—peril and adventure! I was hooked.
When I was little, our version of ranching made a big mark on me. It was very intimate. The iconography that I celebrate is still deeply embedded inside me. It was a very personal, familial experience. At the same time, I had one foot in my family’s ranch and one in suburban Denver. We spent weekends and holidays at this ranch where my dad and grandfather and uncle had a cattle business.

The modernity broke in during college. I took a lot of art history courses and spent a lot of time at the Museum of Fine Arts in Boston and going to New York when I could. I had my Abstract Expressionist side opened up.

And then in art school, my teachers—guys like Ray Turner and Scott Hess—said to me, ‘This impulse is already in you.’ I was encouraged to look at my icons, and the question was, ‘Do you want to be the next anybody, or do you want to be the first you?’ 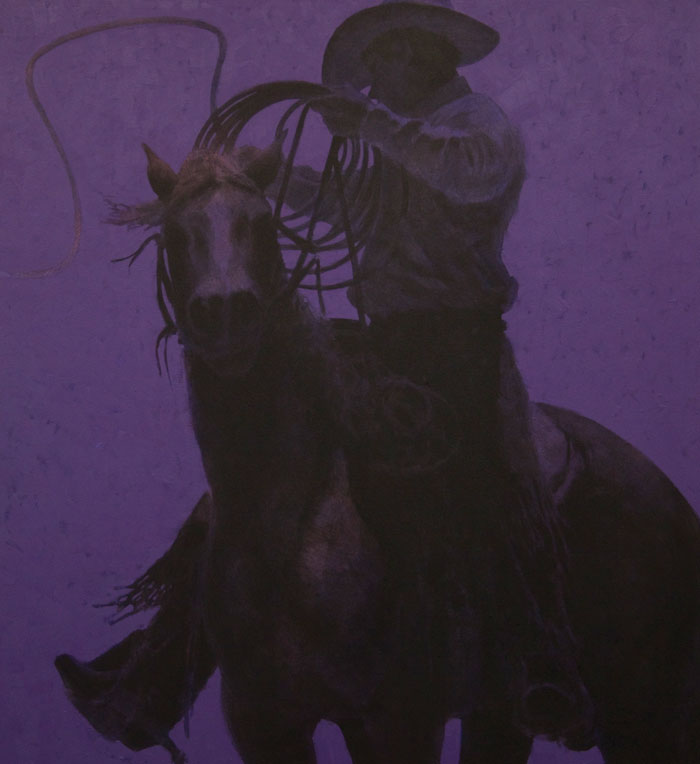 Why do you think the image of the cowboy is so compelling, even to us city-dwellers?

I don’t know. I just work here. [Laughs.] I’m teasing. Maybe [the image’s appeal] is what I’m trying to figure out. It’s a familiar romance for me. I love to ride; I always have. I’ve got horses in town, horses in the mountains. It’s pretty steeped in personal identity for me.

Does riding matter to your art?

Yes. I can’t put a metric on it in terms of what it means to the art—more time on horseback means better art? I don’t know. But it means everything to me in making the art. It’s a great distraction because you’re riding a real living thing. There’s nothing better than moving through open country on the back of a moving horse. It slows everything down.

How do you decide what to paint? Do you wake up in the morning with an image in your mind?

Sometimes. More often than not, an image is a result of a lot of things. There are a couple of rules I’ve established for myself. First, I try not to pre-sketch them. I try to work them out impulsively on the canvas. Second, I have to have seen it or done it in the last six months. And third, ideally, someone is on the phone.

These big ranchers are on the phone all the time. Just last week, I went riding at a ranch, and we gathered in a pasture six times the size of my family’s ranch. [The ranchers] are communicating via phone and text the whole time: ‘Did you check that area? Do we need water over there?’ This is my attempt at making the art current. The icons may be ageless, but they’re also of this era.

Do you worry about compromising the romanticism a bit?

Yes, and I have to tell that worry to shut up. This is our modern West. There’s an aesthetic I’m conscious of, but I have to be true to what I see, too.

There’s a lot left to see, we’re guessing. Could you do this work for the rest of your life?

I’m planning on it. I love the idea of being in my 70s or 80s and still painting. I have a friend who tells me, ‘You are wholly un-employable.’ So this had better work out. 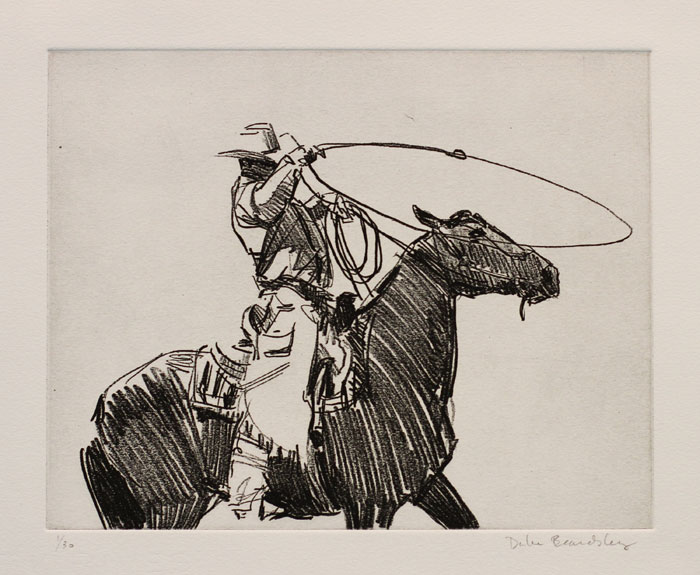 This article appears in the May 2014 issue of Colorado Homes and Lifestyles.
Categories: Art