Notes From a First-Time Fourteener Climb

September 1, 2018, marks five years since I moved halfway across the country from Indiana to Colorado. With no job lined up or any concrete knowledge of the area, I thought I’d stay for a year or two, but as the story so often goes for the westward bound, my aimless route grew roots. I may not be deserving of the sacred “NATIVE” bumper sticker, but over the years I’ve slowly morphed into a local: I have a Colorado driver’s license and plates; I’ve sighed heavily at the service fees yet still proceeded to buy tickets to several Red Rocks shows; I’ve reluctantly accepted that yes, yoga pants do count as real pants; I’ve learned the hard way to always carry a security supply of sunscreen in my purse; I’ve tried and failed miserably at snowboarding; and my camping wardrobe features many more brand names than my professional wardrobe. But there was one thing that I hadn’t crossed off the Colorado checklist; one critical thing that rolled its eyes and called me an imposter when I considered my status as a local—bagging a 14er.

Colorado’s 58 peaks that tower over 14,000 feet have been admired for centuries, and records of pioneers climbing them date back to the early 1900s. Today, there are books and websites dedicated to navigating their elusive trails and merch that helps track which ones you’ve summited. Dating apps are littered with photos of 20- and 30-somethings standing triumphant atop craggy peaks, holding cardboard signs with mountain names and elevation numbers scrawled in permanent marker. 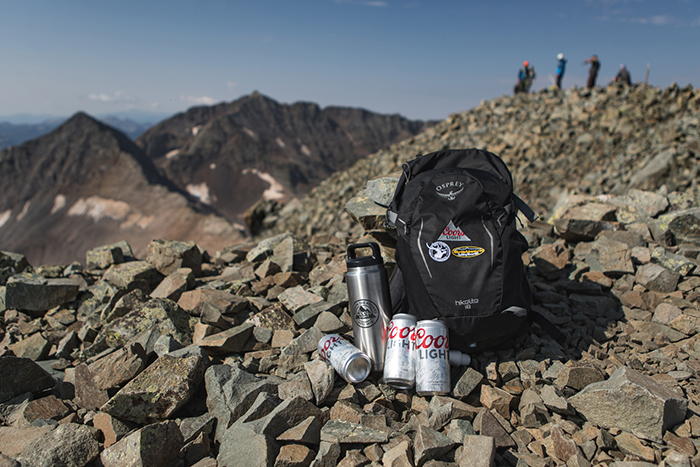 Honestly, the ritual never appealed to me much. Being in the mountains is my version of church, but summiting them always seemed like my version of hell. So when I received an invitation to climb Wilson Peak as part of The Hotel Telluride’s ‘Crack a Coors on Wilson Peak’ package, I was somewhat apprehensive at first. I immediately started Googling the climb, bluffing my understanding of what Class 3 and 4 ledges would entail, and eventually my impulsive, I’ll-try-anything-once nature quieted my anxiety and I booked my trip to Telluride. 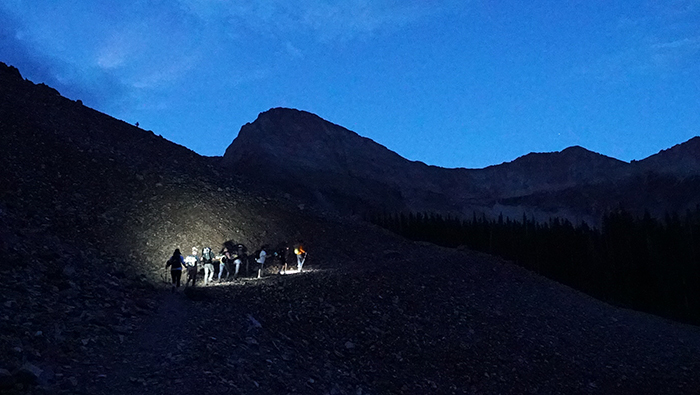 We set out for the Rock of Ages trail at 4 a.m. on a Wednesday with packed lunches and headlamps in tow and helmets and harnesses hanging off our daypacks. While driving to a fly-fishing spot on the Dolores River the day before, one of the fishing guides pointed out Wilson Peak in the distance. My jaw dropped, my anxiety flared and I laughed. Being at the tip of its perfectly acute crest seemed so impossible it was amusing. But here we were, bleary-eyed and half-caffeinated, preparing to make the ascent to the peak famous for its appearance on the Coors Light label. 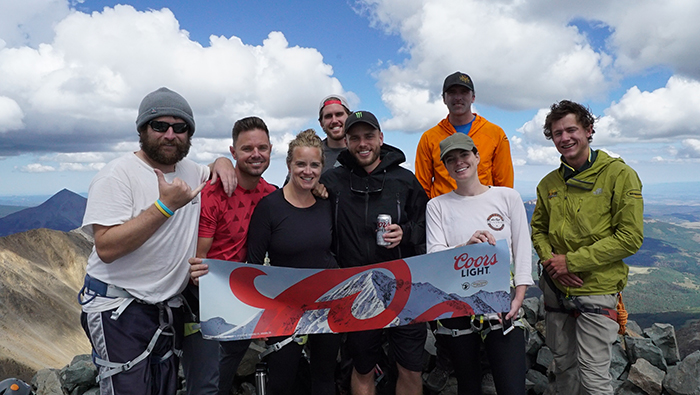 The first leg of the hike felt familiar to me; a steady incline surrounded by dense forest and anchored rock. My group—consisting of a few writers, a few guides from San Juan Outdoor Adventures, a handful of PR reps, a CrossFit junkie and an Olympic silver medalist—was in good spirits, chatting in spurts, followed by quiet moments to catch our breath from the thinning air at 10,000 feet. 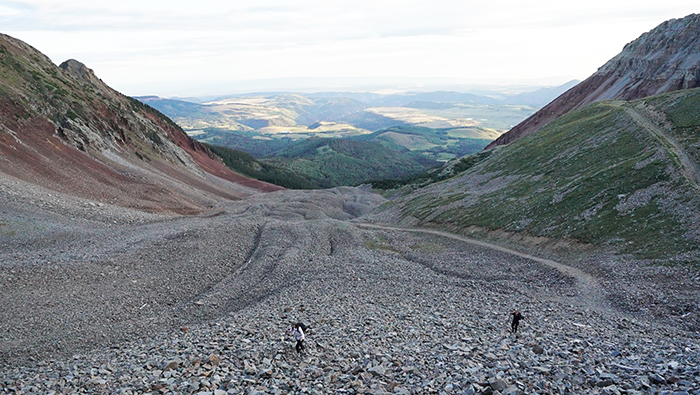 We reached tree line much faster than I expected and the rock turned to scree, crunching underneath our boots like broken glass. “People refer to this trail as the “Rock for Ages,” said one of the guides. The sun started to rise and I savored the cotton-candy skies. As the trail switch-backed, scree turned to talus and footwork became increasingly more difficult. We were coached to test each rock before putting our full weight on it. I had to remind myself to stop to take in the incredible views every once in awhile instead of focusing so intently on where my feet were or whether or not I was going to be on the news tomorrow for tumbling to my death. My quads burned and my heart pounded in my ears. When we finally reached a resting point, I thought we had to be close to the top. One of the guides cheerily shouted, “Only two more hours until the summit! You guys are doing great!” I felt tears well up. I took a big gulp from my Camelbak and started to repeat power mantras I learned in yoga classes in my head.

Every time I thought, “Okay, that had to be the hardest part,” Wilson scoffed and threw an even more difficult challenge my way. At this point, the group had dispersed into smaller clusters, with the CrossFit junkie and the Olympic medalist in the leading crew. My group’s incredibly patient and helpful guide, Tyler, prepared us for scaling to the summit. He helped secure our harnesses, hooked us onto a thick red rope, and instructed us on where to put our hands and feet to navigate the gully. My legs shook as they kicked pebbles down the cliffs. With no prior rock climbing experience, my mind floated from questioning how anyone finds this even remotely fun to feeling superhuman-strong and invincible. 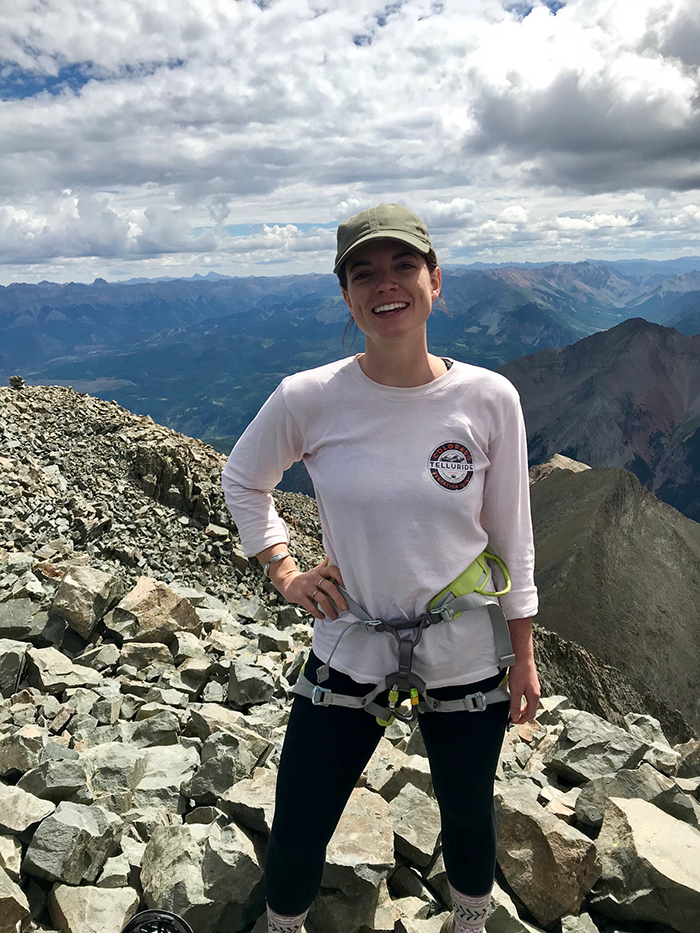 That delirious energy fueled me to the summit, which we reached six hours after we began our trek, and where a wave of elated emotion came over me. At 14,023 feet, Wilson Peak is just barely a 14er, but the views it offers at the top argue otherwise. Jagged peaks rippled into the horizon line and clouds felt close enough to touch. I took a sip of beer, ate half a sandwich, tried to forget about the fact that we had to do all of that again on the steep descent, and relished in the reason anyone does this anyway—to feel overwhelmingly small, lucky, and somehow grounded.

In the few days following the hike, I groaned every time I had to sit or stand and my gait was a slow hobble. I told my mom and boyfriend and coworkers and roommate about the hike ending with, “It was worth it, but never again.” But now, as I sit in my office and rehash the agonizing and euphoric and thrilling parts of that day, something inside me reconsiders. And that relentless adventurous spirit, I think, is what it means to be a true Colorado local.

TRY IT FOR YOURSELF:
The Hotel Telluride’s ‘Crack a Coors on Wilson Peak’ annual package is available this year until September 15. Starting at $2,299 for two, it includes a three-night stay in a Signature King or Double, breakfast for two daily, a private, guided tour by San Juan Outdoor Adventures to the summit of Wilson Peak, packed lunch for two by The Hotel Telluride with guest choice of Coors Banquet or Coors Light on Wilson Peak following the hike, and two 60-minute spa services at The Hotel Telluride to be used during the stay.