Not Just Another Pretty Canvas

When he was 16, painter Diego Rodriguez-Warner dropped out of Denver’s East High School because he felt it was pointless. His parents resisted. “It took me two years to convince them I was right,” the artist shares. “There was this book, How to Quit School and Get a Real Education. I had all these facts, and I wanted them to listen. School was not meant to create critical thinkers but rather just train workers. I wanted to be a creative worker; I was proposing an argument, but they were not really buying it. When I got a full ride to college at 18, my dad was really impressed.”

Rodriguez-Warner, who was born in 1986 in Managua, Nicaragua, completed his Bachelor of Arts in COIN (counterinsurgency) Theory and Fine Arts in 2009 at Hampshire College in Amherst, Massachusetts. History, politics and economics were his original focus, one that would have led him to become a defense analyst or write history books. But the chance to study in Cuba in 2008 turned his art hobby into a future career. “I took a semester off to make art, and that was it," he says. “I could not go back.”  When Rodriguez-Warner returned, he added art as a second major.

With a dual undergraduate degree in hand, he returned to Denver and made a living by selling small ink drawings. Two years later, he was accepted into the graduate program at the Rhode Island School of Design in Providence. In 2013, with a Master of Fine Arts in printmaking, he set off on his quest to create art that would require contemplation. 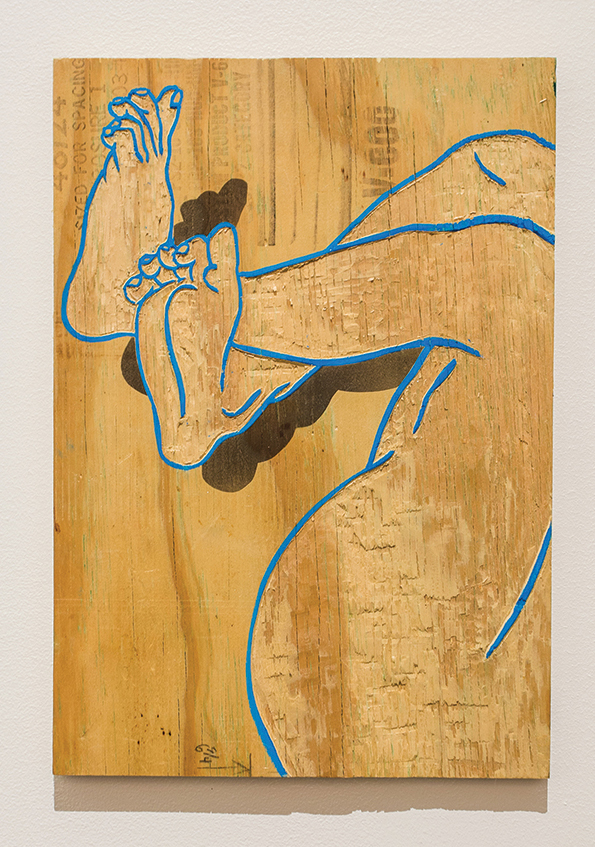 “I don’t want to hear that my work is beautiful. I want those who see it to engage with the ideas behind it and talk about that.” — Diego Rodriguez-Warner 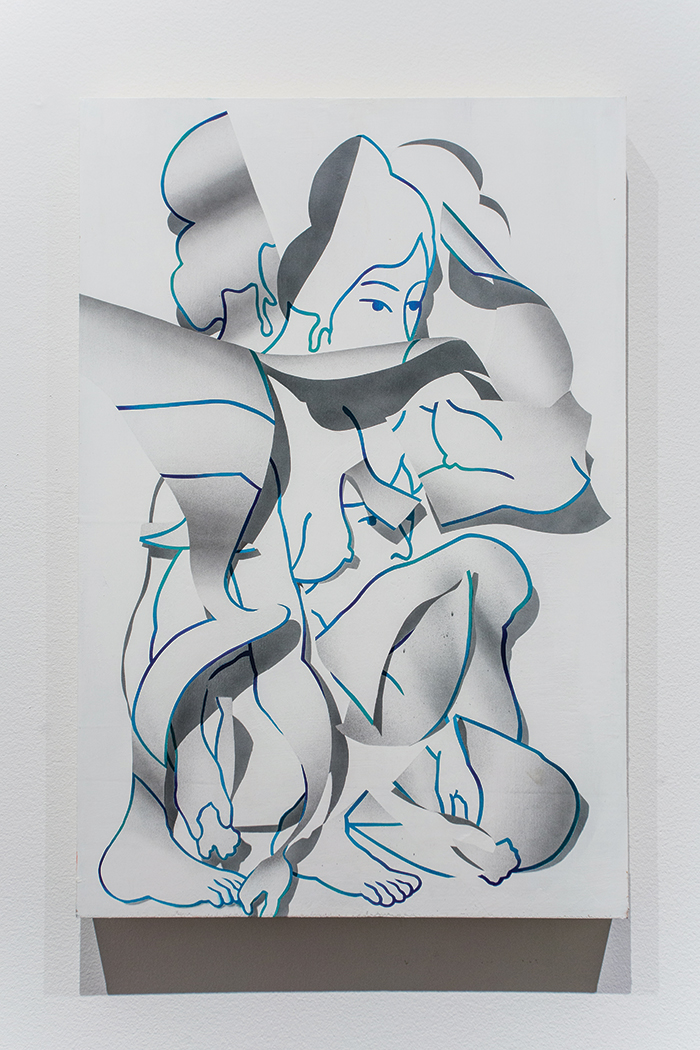 Bathing Gypsy No. 9 by Diego Rodriguez-Warner

“Historically, paintings seem to return to some repetitive patterns,” Rodriguez-Warner explains. “There’s a picnic painting, the bathing nude, a reclining nude, a battle scene with cavalry charging. These are touchstones of meaning through the history of art. I try to subvert them, to introduce complication to these simple narratives and provoke critical thinking. You cannot look at a painting of the cavalry charging and not realize that it inflicts pain. You cannot produce a bathing nude without thinking of how the female body is used and how it perpetuates a pattern.”

This, from someone who looks more like a skater boy skilled at graffiti than a serious artist just off of a solo exhibit, “Honestly Lying,” at Denver’s Museum of Contemporary Art. But that is the point of both Rodriguez-Warner and his art. One has to dig deeper and allow the contradictions to set in. 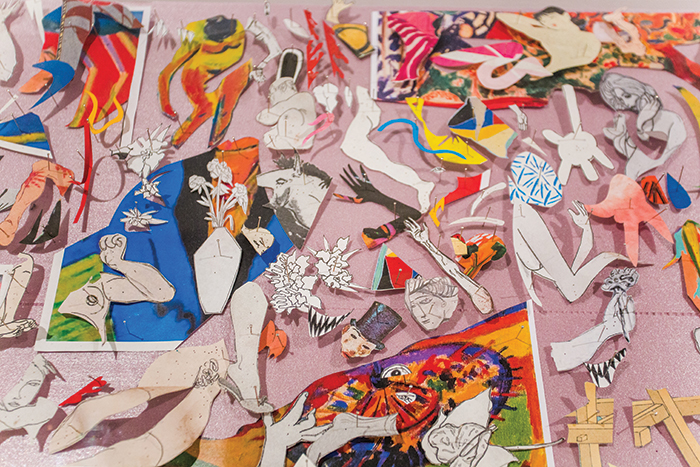 An example of how the artist organizes a maquette in the process of creating his pieces.

An art piece by Rodriguez-Warner requires a pause and closer look. Naively bright colors draw the viewer in, and only after one is captivated by the beauty does the darkness of a theme sink in. It is layered and thematically complex, so it begs for interpretation and engagement.

So how does a former counterinsurgency student go about putting together a piece of art? The process is tactical and intricate. Rodriguez-Warner collects small cutout images. Some reference works by famed artists; some have no “famous” link or connection; some are cut into even more pieces. He then creates a field of play in which the pieces combine to convey his desired narrative. These images form a maquette that is photographed, projected, and then painted or created by way of different mediums—acrylic, spray paint and some carving. He references the shadows of the maquette to make it clear that it is not quite real. 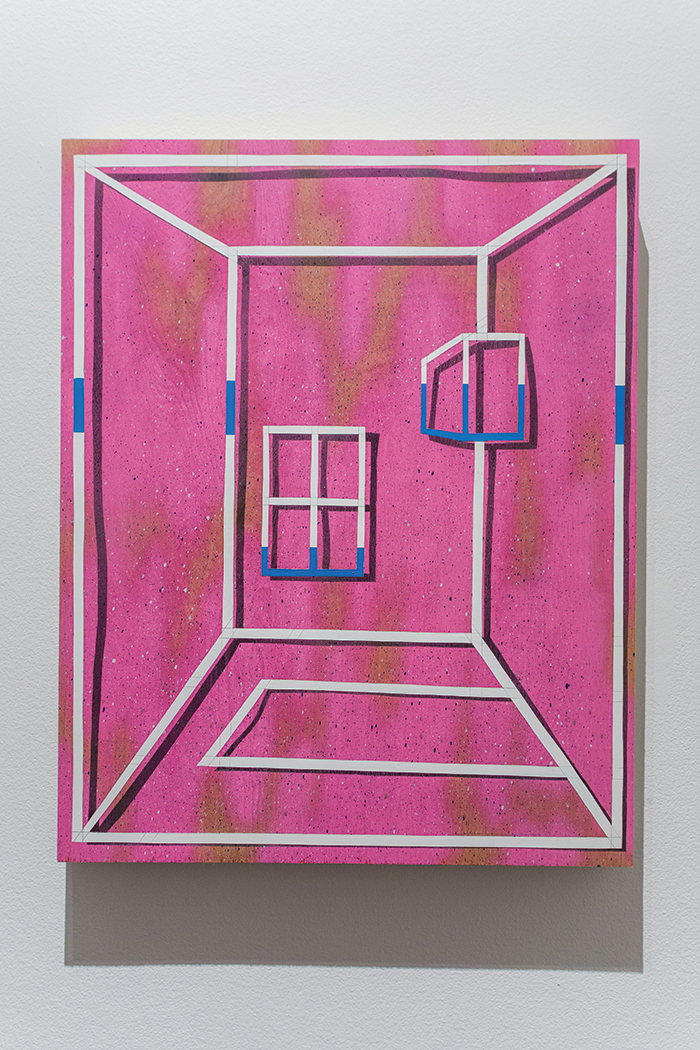 “Diego is a remarkably generous artist,” says Adam Lerner, director of the Museum of Contemporary Art (MCA) Denver. “His natural tendency is to continue to add more and more and more to a work until it is absolutely bursting with subject matter and color.”

His works take time. And lots of arranging and layering. “People have this impression that I go into my studio, do a bunch of drugs and make paintings,” says Rodriguez-Warner. “And that cannot be farther from the truth.”

Rodriguez-Warner has shown his work in exhibits from Denver to Brooklyn to Berlin. His art will soon be available through the MCA’s Octopus Initiative, a lottery-based program that allows patrons to borrow art at no cost. “Art was a problem I could never understand, and I could see that there was something that was challenging and something that will be changing for my entire life,” he says. “I cannot imagine getting bored with it.”