It takes a discerning eye and a disciplined hand to mix styles and furnishings that span the decades, and to end up with a sleek, sophisticated and creatively contemporary home. Jeffrey Elliott has proven himself to be such an adept mixologist.

The Denver-based designer, whose eponymous firm is known around town for its 20th-century aesthetic, helped a Denver couple fulfill their desire to build a California Modern home full of glass and right angles, and perked it up with finishes and furnishings that blend modern elegance with 1980s retro glam.

Elliott was recruited early in the design process and asked to weigh in on the architect’s vision for the home. As initially designed, the floor plan was oriented around a wide-open great room containing the entryway, living room, kitchen and library. “But it felt too open; it felt kind of gutted,” Elliott says.

To create some intimacy and separation between the loftlike spaces, Elliott suggested introducing three decorative columns with substantial vertical heft—two by the entry and a third near the sitting room. He clad the columns in ebonized oak and then incorporated the rich wood throughout the main living space, designing oversized kitchen cabinets and library shelves that reach to the ceiling. 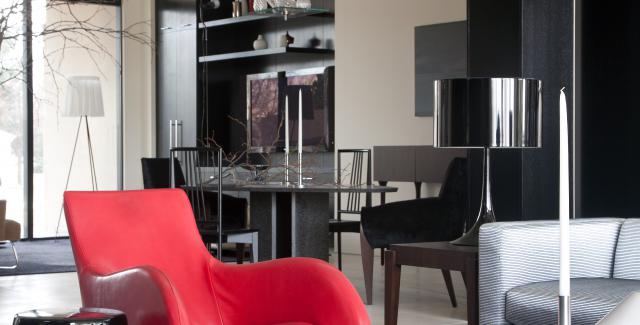 The ebonized oak and the black granite fireplace surround stand out like shots of espresso amidst a frothy latte of creamy walls and white concrete floors. “The homeowners liked the idea of coffee: black, with sugar, with cream, with no cream,” Elliott says, so he carried that high-contrast palette into the blend of vintage and contemporary, sculptural and angular furnishings.

“I focused their entire furniture collection on Philippe Starck’s tapered, strict, military-inspired work pre-1995,” he says, weaving in leggy chairs and side tables and floor lamps with a metallic sheen.

In the living room, Elliott mixed the homeowners’ glass coffee table and Le Corbusier pony-fur chaise with a Philippe Starck side chair and a vintage Edward Wormley sofa. The room is cubic, as is the fireplace, and the sofa—the biggest piece of furniture in the room—is similarly square and dimensional, grounding the furniture assembled around it. To add warmth to the collection, Elliott incorporated a cherry red chair and ottoman by Gerard van den Berg, along with Elliott’s own custom-designed wooden end tables.

The linear, low-lying furniture in the living room sets the tone for Elliott’s approach to outfitting the rest of the home. While the high ceilings and open, light-filled spaces certainly could handle taller pieces—because, as he says, “there’s all this vertical architecture and big scale happening”—he kept everything low to suit the homeowners’ 1950s-era aesthetic, working with the same horizontal plane throughout the great room to unite the various clusters of furniture.

In the library, an intimate space that is tucked behind the freestanding fireplace, Elliott installed a wall of mirrors to reflect the light flooding through the black mullion windows across the room. A pair of slipper chairs by Christian Liaigre for Holly Hunt and two Starck floor lamps flank a pony-fur ottoman that Elliott designed for the book-filled nook. He kept the library’s furniture leggy, rather than incorporating heavier or skirted furniture, because “the more legs you have, the more open a space will feel,” he says.

That legginess continues in the dining room, where Elliott paired the homeowners’ 1980s-styled dining set with Dakota Jackson captain chairs and a long and lean sideboard by Paul Mathieu for Donghia. A contemporary chandelier—a sculptural pyramid of illuminated glass, also by Starck—adds artful shine, and a moody landscape by Dutch painter Carla Klein “anchors everything,” he says.

Elliott was under strict orders not to add anything too plush or downy to the contemporary interiors. “They do not like loose cushions, they do not like back cushions and they do not like pillows,” he says of the homeowners. “Everything must be hard, square and linear.” However, because most of the home’s furniture is wood or metal, there was room to play when adding fabric textures to the space, so he and the homeowners upholstered a few pieces in velvet and pony fur to add some warmth and tactile interest.

By bringing such a spartan approach to the furniture’s shapes and surfaces, every piece, right down to the smallest side table, serves the design brilliantly. “It’s an elegant reinterpretation of that California Modern ’50s concept,” Elliott sums up. Spoken like a true mix master.

40 Soul-Stirring Works of Art, According to the Pros

Bring the Denver Chalk Art Festival to Your Home

Introducing the 2020 Home of the Year Design Teams

40 Soul-Stirring Works of Art, According to the Pros

Bring the Denver Chalk Art Festival to Your Home

Introducing the 2020 Home of the Year Design Teams

Color: It's the New Gray

A 1920s Denver Home Gets a Backyard Makeover

A Comprehensive Guide to Gardens

Which Outdoor-Living Lifestyle Fits You the Most?