A busy doctor and parent with a hectic lifestyle, the owner of this 6,000-square-foot home in Denver’s Hilltop neighborhood wanted her space to be a source of Zen-like serenity. For the San Francisco transplant, that meant a refined yet casual space with a calm, monochromatic palette.

Although the home, built in the 1990s, is relatively new, the interior architecture needed a complete facelift before interior designer Beth Armijo of Armijo Design Group could start thinking about color, furnishings and materials. The structural renovations included gutting the master bath and—to kick off the project—reinventing the kitchen.

Enter Angela Otten, a kitchen designer with William Ohs, who created a beautiful, functional space that suits the homeowner’s needs. “She wanted a clean look that was far from traditional,” Otten explains, “with two ovens, plenty of storage and ample seating for her two children and their friends.”

The remodeled kitchen is simple and symmetrical, with a range wall as its focal point. The alder wood cabinets, featuring varying door styles, are painted a custom shade of gray with a soft glaze. An oversized island with dark contrasting cabinetry provides plenty of gathering space. 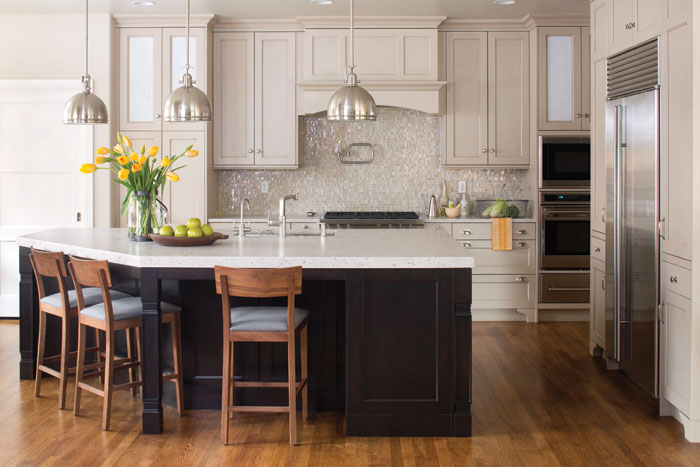 With the kitchen makeover underway, Armijo began to develop the overall design concept for the home. “We chose the kitchen cabinets and decided on the layout for the space, and then found the tile and granite; those selections were the springboard for the home’s overall color palette,” she says.

To develop a nature-inspired concept, the designer gravitated toward gray stains and soothing colors such as light blue, green and cream. She also used natural fabrics, such as linen, cotton and wool, with patterns that occur in nature (think leaves and tree vines) in areas like the master bedroom and dining room.

Because of the home’s open floor plan, in which multiple rooms are visible from any given point, Armijo was careful to unify the spaces. She worked with Iris Building Group to remove the living room’s custom built-ins and separate the room into two spaces that are now connected with the help of color. “The layout feels really cohesive and gives the family a reading and living space that’s open to the kitchen, so everyone can be together,” Armijo says. 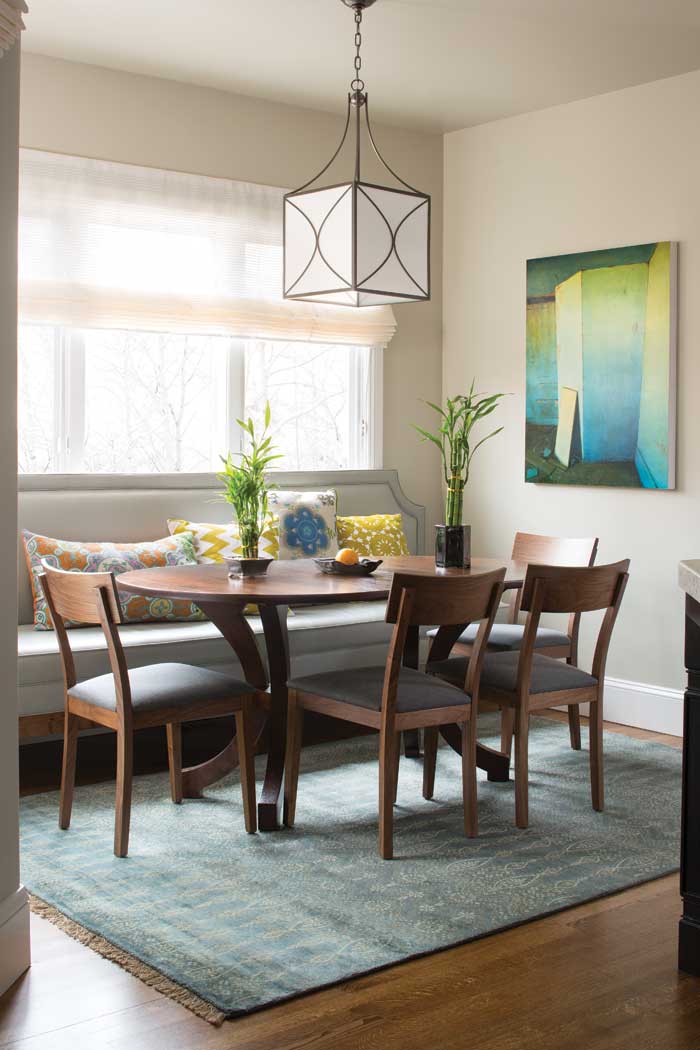 Off the kitchen, a breakfast nook features a banquette that anchors the space. Perfect for accommodating several kids during play dates, the piece is upholstered in vinyl so the homeowner doesn’t have to worry about messes. 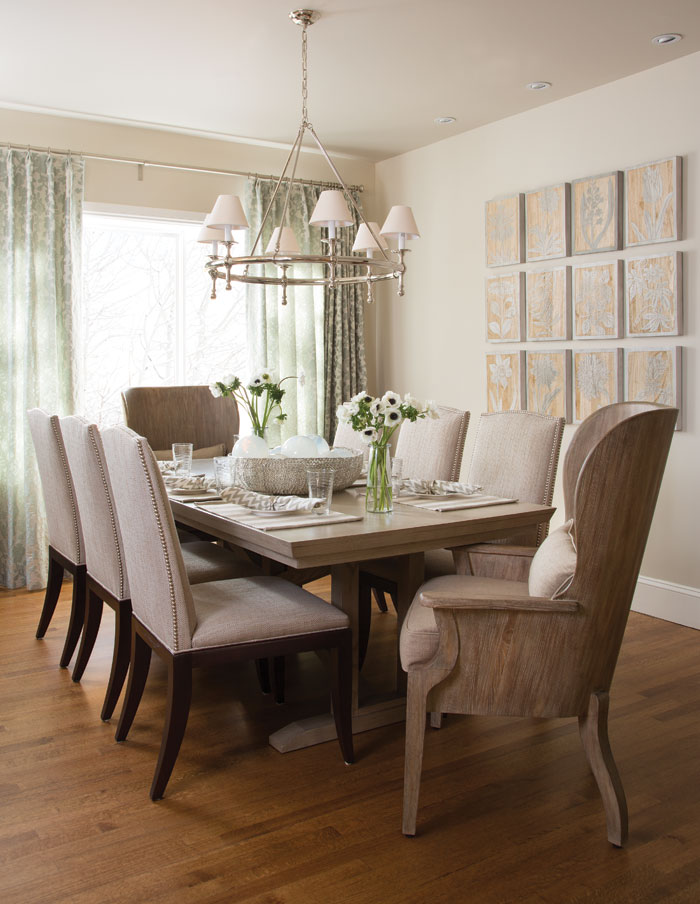 The dining room, separate from the kitchen, is a private, formal area that’s perfect for entertaining. Armijo used dramatic wood wing chairs from Ashley Campbell at either end of the table to separate the space from the adjoining hallway and to subtly contrast with the upholstered side chairs.

When it came to choosing art for the home, Armijo was careful to keep the client’s minimalist approach in mind. “Van Gogh said, ‘The great doesn’t happen through impulse alone, and is a succession of little things that are brought together,’” she says. “People want instant gratification, but when it comes to accessories and art, decisions shouldn’t be rushed. So we were very selective with what we chose.” 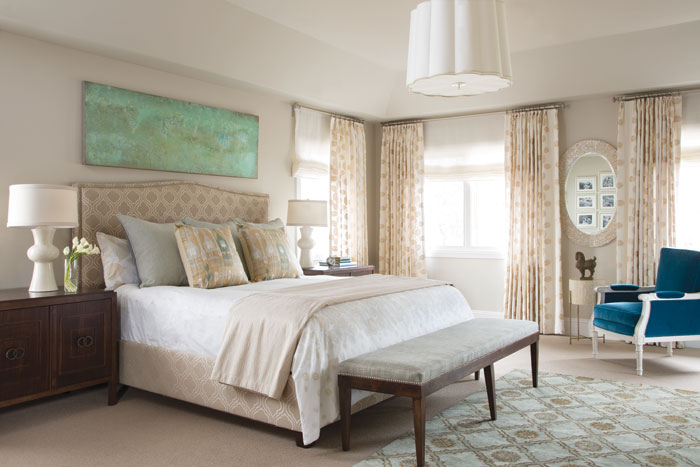 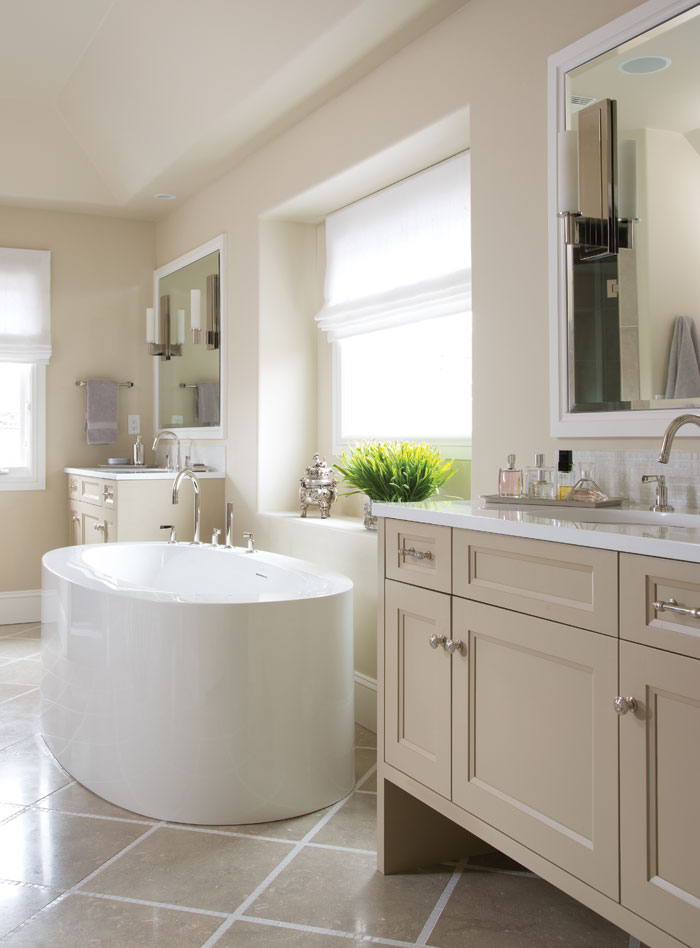 Just like its art collection, the home proves that great design comes to those who take the time to slowly and thoughtfully develop living spaces that speak to them. And for this homeowner, a sophisticated yet family-friendly home with a minimalist sensibility was worth the wait.

This article appears in the April 2013 issue of Colorado Homes and Lifestyles.
Categories: Interiors