Meet Rebecca Gart: In the Know for Colorado

When she moved to Boulder at the age of 21, Rebecca Gart had aspirations of learning the ins and outs of Colorado—and she did just that. After many years writing and editing for sports and culinary publications, Rebecca has become an expert on where to go and what to do in The Centennial State.

And after 14 years devoted to raising a family in Denver, she’s back in the magazine game as the contributing writer behind High Points, a new Colorado Homes & Lifestyles column centered on the best places, things, people, and design tips our state has to offer.

We recently sat down with Rebecca to learn more about her wealth of knowledge, her recent home build, and what to expect in columns to come.

What can we look forward to in High Points?

I want it to be the spark that gets people moving and exploring different parts of Colorado. I’m going to introduce you to a stylemaker and tell you what their top 10 things are. I’m also going to tell you how to shop a farmer’s market, for example, or tell you where to eat in the coolest up-and-coming neighborhood in Denver. It’s going to provide answers to the question, “What do I need to know right now?”

I’ll also be doing something called “Save, Spend and Splurge.” It’s a different item each month. For example, for August I did low water glasses—one for $3, $11, $45.

Tell us a bit about your background and experience.

I grew up in Philadelphia. I attended Syracuse University, majoring in writing for TV/Radio/Film. When I graduated, I moved to Boulder, Colorado, because I figured my first job out of college might be low-paying and I wanted to make sure I chose a city where the quality of life was wonderful. I got a job at the Daily Camera writing obituaries and wedding announcements, and worked my way up to becoming a newspaper reporter.

After newspaper reporting, I decided to switch to magazine so I could have more time to work on my writing and have more creativity overall. I became an editor and writer for sports and fitness content, eventually becoming the editor of Inline magazine (which was really big in the 90s!). It was so much fun to be in the sports and fitness industry in Boulder; it really became my town and I learned everything about it!

It was at this time that I really discovered a love for food. I started taking cooking classes at the Culinary School of the Rockies and found that it was one of my passions. I became food editor for Delicious Magazine (now called Delicious Living). That was a lot of fun because I was writing and editing pieces that were about healthful cooking, something that has become truly important to me.

Then I married a third-generation Denverite and moved to the Mile High city to start a family. For the past 14 years we’ve been raising three children—our daughter, who is now 14 years old, and two boys, ages 13 and 8. 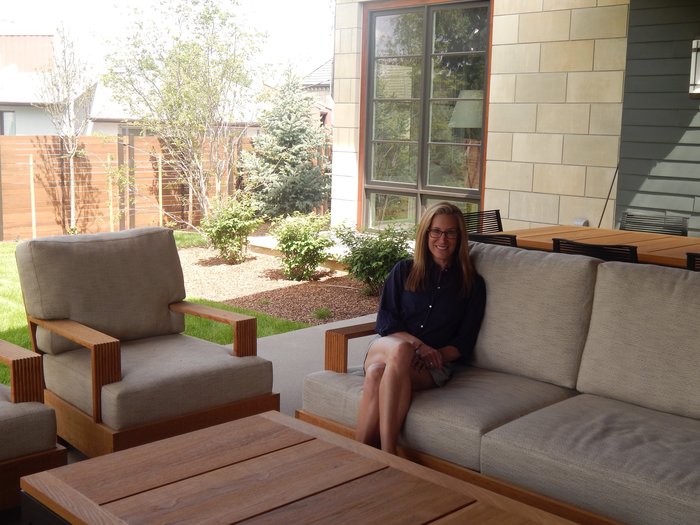 You recently built a new home in Denver. What inspired its design?

In 2000, we decided to build a house in Hilltop. We used an architect named Elizabeth Metz, but when you’re designing a house when you’re pregnant with your first child, you just have no idea what the patterns of your life will be. You don’t know what rooms you’ll use, what rooms you won’t, what’s important—it’s not like we made mistakes, but we did things that we wouldn’t do again. We had three little bedrooms upstairs with one bathroom. We didn’t have a big enough mudroom or a big enough pantry. We had a living room we never used.

We were in that house for 14 years, but about three years ago I saw a lot three houses up the street. Ken jumped on it and asked me, “Do you want to build again?” We love the building process. It can be really stressful—but we enjoy it; we have similar tastes and styles.

We bought the lot and spent a year working with Elizabeth Metz to design the perfect house for our family. We moved in this past December. The lot is 18,000 square feet, and our home is a little over 5,000 square feet—we really wanted to have a lot of outdoor living space for running around.

We didn’t want to build an enormous house. We’re a very tight-knit family and love being together. And I’ve had so many people walk through our house and say it’s the most thoughtful house. It’s a very open, useable floor plan, and every room is used almost every day.

Who were your designers?

We really loved working with Elizabeth Metz; she did an amazing job. The funny thing is that she lives right in back of us, so has a view of her masterpiece everyday!

Our home builder was Paul Newmeyer. He has the highest level of personal integrity and customer service we have ever seen—simply the best.

We chose Ashley Campbell as our interior designer. She's young, hip, and the mother of three young boys. She has this real urban chic quality to her work, and I knew she was going to work well with me—and our finished product is just that.

We used Aspen Leaf Kitchens to help with kitchen design and build cabinetry throughout. They did a beautiful job, and we couldn't be happier with just the right blend of form and function.

How would you describe your style?

I call my house “organic contemporary,” a term I picked up somewhere. It’s contemporary in that it’s very clean. It doesn’t have a lot of knickknacks. And there’s a real organic quality to it; we have a lot of materials from the outdoors and a lot of wood and stone. It’s a calming and peaceful style.

What is your favorite space in the house?

Definitely my covered patio outside. You don’t have to worry about the natural elements hurting the furniture or the space—and you really can use some beautiful furniture out there. There’s the dining area, the seating area, and there’s this huge outdoor grill, which is perfect for me because I’m always grilling. We have these 9-foot doors that open up from our great room into it, so it’s an extension of our living area. To keep it the covered patio from feeling too dark, we put a skylight into the ceiling. 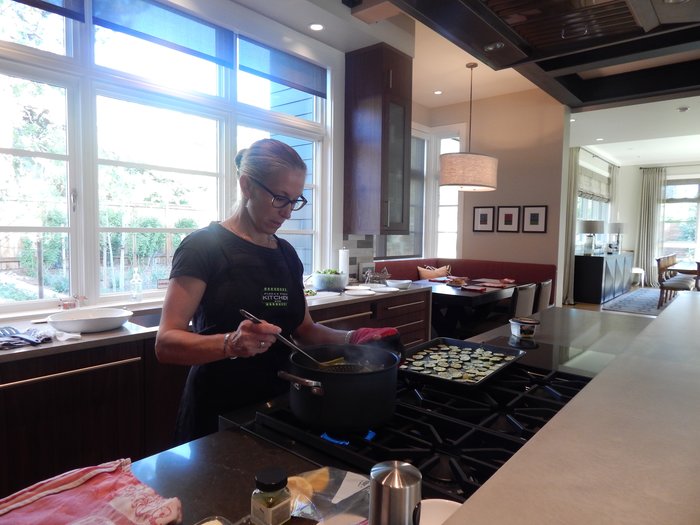 I also love my kitchen. We have two islands: one for eating and one for cooking. When I’m preparing meals, instead of looking into a wall, which is what I had in my last house, I look outward. I see my fireplace, and I see my family. It’s just a different feeling when you’re a part of things rather than facing a wall and having your back to everything. I like looking out.

Keep your eyes peeled this for the first installment of "High Points" in the August issue of Colorado Homes & Lifestyles magazine.