Blending modern forms and organic elements, this contemporary bathroom is simple and open to reflect the beauty of the landscape outside the Vail Valley home. “The space is soft, quiet and soothing,” says designer Robyn Scott of Robyn Scott Interiors. “The homeowners are drawn to European design, and they envisioned a very clean, minimalist room.” 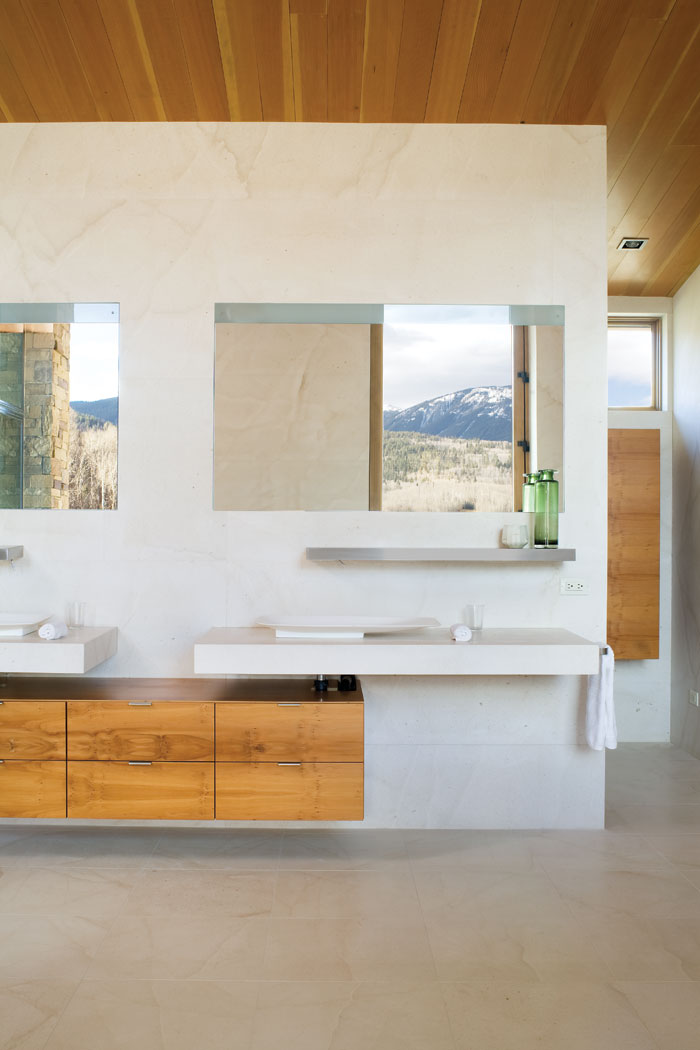 In the early planning stages, as Scott and her clients walked the aisles of a cavernous stone warehouse, a stunning slab of onyx stopped them in their tracks. “We were looking for a stone of some kind for the shower wall, and we all fell in love with its incredible pattern,” she says. “The earth tones also fit well with the natural color palette of the space.”

A satin-etched glass door with hand-blown knobs opens into the light-filled room, where a deep, cast-resin Agape soaking tub takes center stage. Two shallow, rectangular basin sinks top a pair of white cantilevered counters, and mirrors reflect the stunning views. Custom “floating” cabinets are built of Yew, an exotic wood known for its fine, distinctive grain. “The cabinetry is rustic in material, but modern in shape,” Scott says. “The simple design highlights the grain of the wood, which relates well to the Colorado outdoors.”

Floors and walls are covered in cream-hued honed limestone, creating visual continuity and reflecting the room’s natural light. Furnishings are spare and elegant, from the small arrangement of stacked river rocks to a sculptural white chair made from industrial seatbelt strapping.

“It’s a minimalist space with monochromatic tones that highlight the elemental materials,” Scott says. “I think this room is a beautiful example of how creating something really simple leads to a very strong design.”

“It started when the homeowners wanted a better shower,” says contractor Craig Pickrel of True North Builders, Inc. “They were deliberating between remodeling or moving; we had to present them with a design for the space that would make them want to stay in the home. In the end, they decided to stay—and the project evolved into a whole-house remodel.”

To reinvent this Greenwood Village home’s master bath, which was originally dark and narrow, The footprint was enlarged by borrowing space from a nearby room. Mullion-framed windows and a skylight welcome sunshine, which is further reflected by mirrors and a color scheme of soft white and gray. 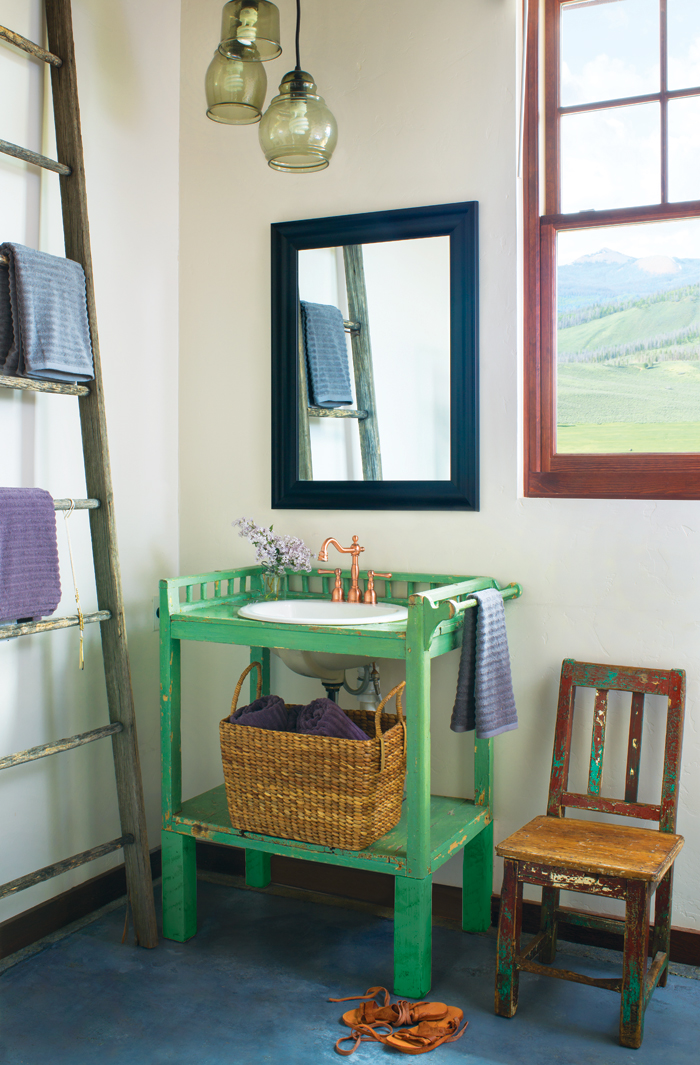 The space was designed by Kristen Ludwick Bland of Denver-based Fusion Light & Design. "The homeowner and I worked on the design of the bath together," says Bland. "She wanted an elegant yet eclectic look. We achieved that by selecting a chandelier that is very elegant, but it's a bit edgier in white. We did a more contemporary shower but a traditional claw foot tub. This allowed us to tie multiple different styles together, giving us the eclectic look."

Bland specified white custom cabinets, which were designed to look like freestanding pieces, and had them trimmed with traditional hardware; countertops of gray quartz are finished with curved edges. An oversized mirror above the vanity is trimmed in white to complement the woodwork, and the ornate white sconces were mounted directly on the mirror for additional sparkle.

Knowing the classic Carrara marble floors could be cold underfoot, Pickrel suggested radiant in-floor heating. The tile extends all the way across the floor until it meets the walls of the large, glass-enclosed steam shower. The white, cast iron slipper tub with a floor-mounted chrome faucet was placed in the center of the room so the home-owners could enjoy the view, and a tiny tufted ­chair by Arhaus invites a quiet moment. In addition to recessed lights, a crystal chandelier from Fusion Light & Design drips with more than a thousand pieces and creates drama, tying together the room’s traditional and modern design sensibilities.

Designer Katie Wolfe Agron of Denver’s Wolfe Design House was asked to bring a dated, 1970s bathroom into the 21st century. “My clients moved here from New York to be closer to their family,” she says. “The home they purchased still had the original, 40-year-old fixtures and finishes, and they wanted to give the bath a major overhaul.”

Agron chose a cool color palette of gray, navy and black, with white cabinetry and tile, to brighten up the his-and-her space. “The room is a blend of masculine and feminine elements,” she says. Walls are painted in Benjamin Moore’s Bear Creek—a gray-brown hue—and the floors are hardwood, a material Agron says homeowners shouldn’t be afraid to use in a bathroom. “If they’re finished properly, wood floors will withstand moisture and they add a lot of warmth to bathroom spaces,” she says. “And you step on a bath mat when you get out of the shower, right?” 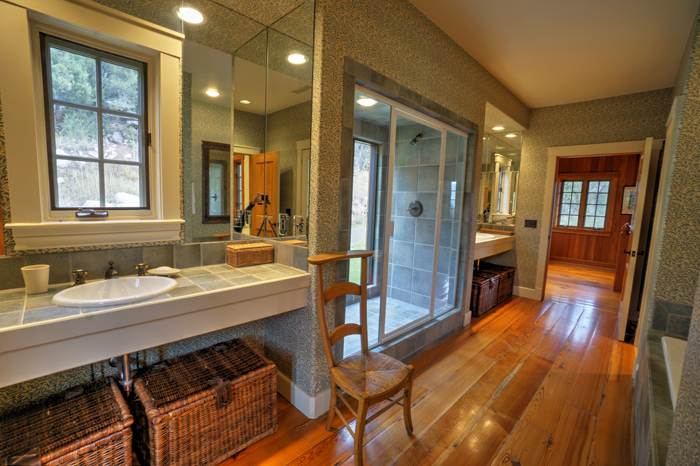 On ‘her’ side of the room, Agron specified floral wallpaper, a glamorous oval mirror, fabric lampshades to soften the light, and a slipper chair covered with toile fabric by Schumacher. “The more upholstery you can put in a bathroom, the better,” she says. “It’s cozy, comfortable and absorbs noise.”

The built-in white vanity is topped with Carrara marble, and the sconces are mounted directly on the mirror backsplash to create a tailored look. “Just have your electrician install the boxes before you hang the mirror,” Agron advises.

Two walls are covered in ceiling-height mirrors, for reasons both practical and aesthetic. “The bathroom is where you really need a full-length mirror,” the designer says. “And putting mirrors on adjacent walls gives the illusion of a much bigger space.”

The design is elegant without being fussy. “We created a master bathroom as sophisticated as the homeowners, with a nod to their New York roots,” Agron says.

This article appears in the April 2013 issue of Colorado Homes and Lifestyles.
Categories: Interiors