It's All About the Exhale

Take a deep breath, and enjoy a bit of design advice from Kathryn M. Ireland

My second week on the job as editor-in-chief of this magazine, I was seated at a dinner event across from designer Kathryn M. Ireland—a lucky break for me, because she was immediately charming and hilarious, and it introduced me to her design work and her unique line of fabrics (now operated by her middle son, Otis, who has also launched Otis Textiles, a line of European wovens). I’m happy to say we’ve become friends in the years since, and I still admire her ability to create beautiful, comfortable spaces for living—spaces that inspire the long and leisurely chat, the late-afternoon exhale, and an enjoyment of the moment.

Last July, that moment happened to be at her home in the south of France, a spot she and her family have been visiting for the past several decades. I was there along with 12 other people, and we were part of a Design Boot Camp. (Ireland’s idea of boot camp is to leave your boots behind and sit barefoot with a glass of rosé from a friend’s vineyard.) The itinerary included flea-market shopping, divine home-cooked meals and design discussions. The better part of it encompassed relishing the countryside, riding bikes and getting a feel for the pace of a French summer. All those things go into the décor.

Ireland’s ex-husband was a film director, and her start as an interior designer came about because their friend Steve Martin wanted a house like the one Ireland lived in, and so she created one for him. I feel safe to say that she is more of a director in life, setting the scene for living to take place. I do believe that much of her skill lies in her DNA, an innate ability to pluck out the beautiful and arrange it to feel like home. Her latest venture, The Perfect Room, offers up her curating services, from accessories to total design, for any room in the house. So, although some of Ireland’s tricks can’t be taught, she’s happy to share whatever she can. 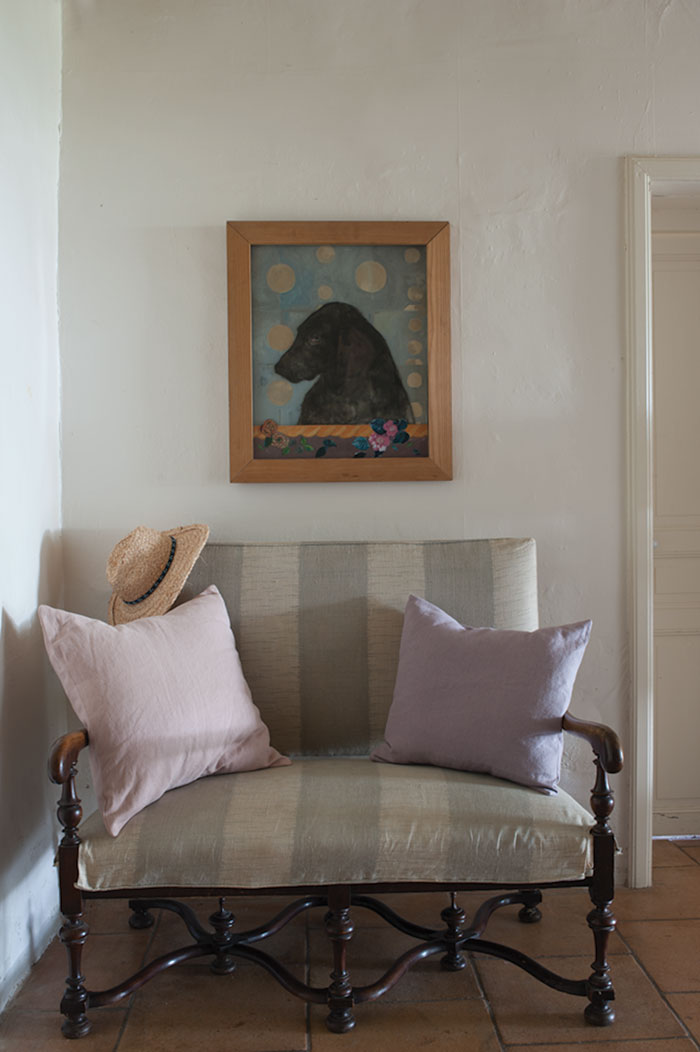 “Don't let the frame overpower the art. And hang art that’s meaningful, like this piece from my childhood friend India Jane Birley.” The pillows are in Otis Textiles’ Georgina fabric. 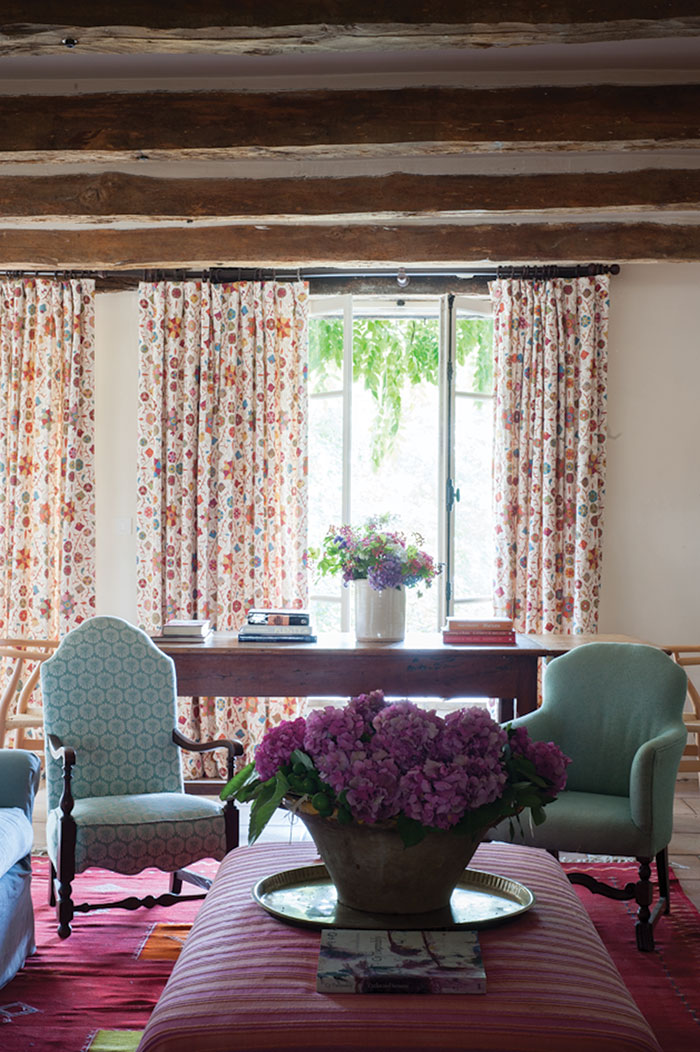 “Every room should have something red. Here, it’s in the carpet. I use it religiously; it’s a reflex. A red lamp shade, a pillow covering or even just a few red-bound books—it doesn’t take much, but I feel it brings good luck.” 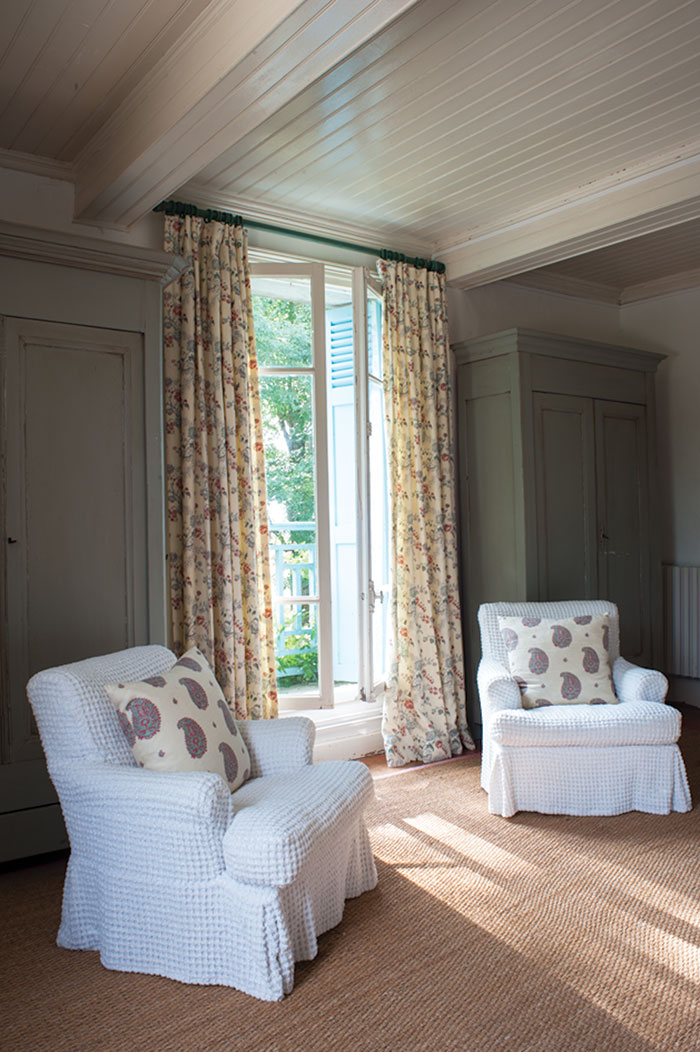 “Paint two disparate pieces in the same color. The two armoires above look like a pair because they’ve been painted in the same shade of gray-green, but the fact that they’re different makes them even more interesting.” Ireland’s Kirkbean red/turquoise fabric covers the pillows. 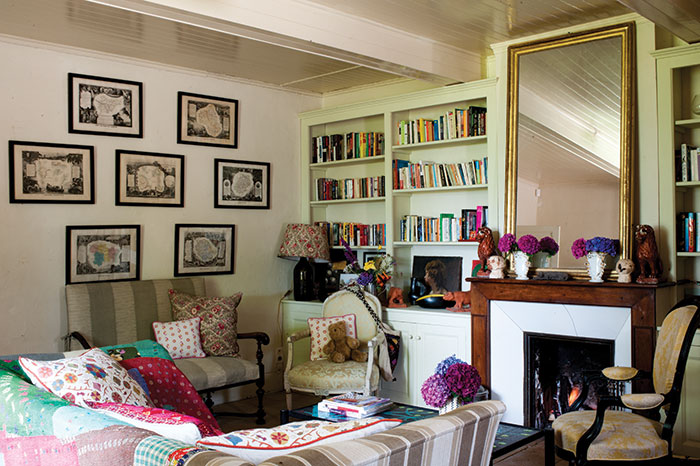 “Put one ugly thing in your design—a piece of your child’s artwork, something a friend has given you. Even if it’s not your taste, don’t get rid of it. Instead, put it in a place of honor. It becomes humorous, and who cares what other people think! Fill a room with flea-market finds, and a good assortment of textiles always brings a room to life.” 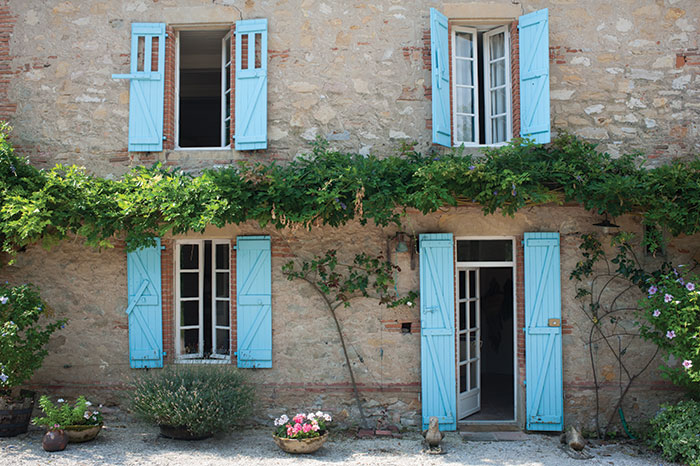 “Paint color is a huge statement,” says Kathryn M. Ireland. “It takes you somewhere else. A pop of one single color, like the blue on these outdoor shutters, brings everything to life.”

Ireland’s design boot camps run from June to September; private ones can be arranged in other months.