Into the Woods with Theresa Haberkorn

Growing up, Theresa Haberkorn’s favorite PBS character wasn’t Mister Rogers or Big Bird; it was the man-permed Joy of Painting host Bob Ross. Ross schooled viewers in oil painting for 11 years on his instructional television show. “My mom and I would watch him every Saturday morning,” she says. “He had that crazy hair and the way he talked and his soft voice…” 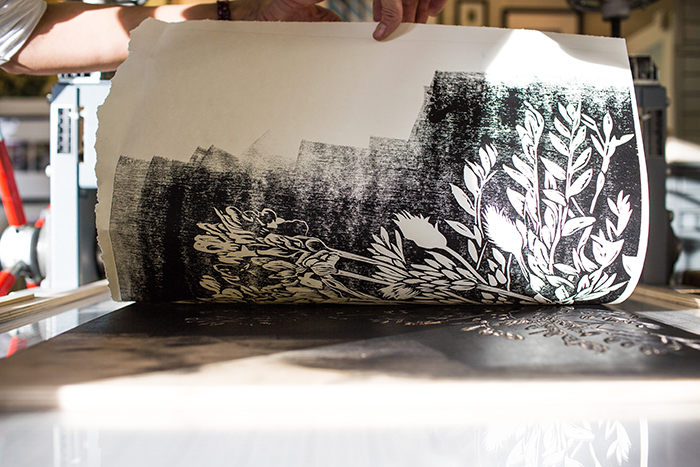 Clearly, for Haberkorn, art was an early crush. But as the 43-year-old—who looks a decade younger—sits in her sunny alleyway studio, she explains that the journey from her Bob Ross-watching days in coastal Florida to working as an artist in north Boulder was anything but intentional. “I never thought I was going to move to Colorado,” she says. “I just wanted to work a season at a ski resort and kind of never left.” 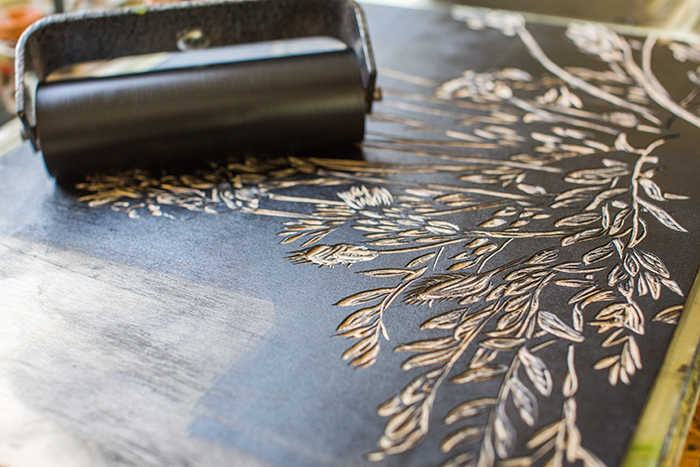 “I just wanted to work a season at a ski resort and kind of never left.” — Theresa Haberkorn 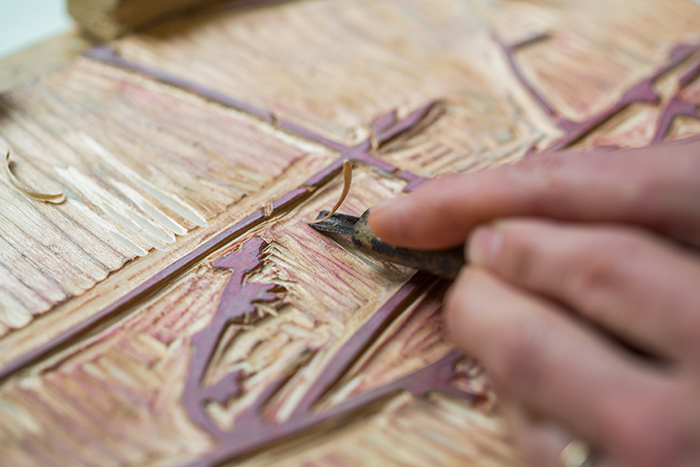 Colorado has become her muse, and many of her woodcut prints reflect her adopted state. “Woodcut is a very graphic medium,” says Haberkorn, who hikes around Boulder’s foothills taking photographs to get ideas. “I have a lot of images of winter, and the contrast of light and shadows on snow.” 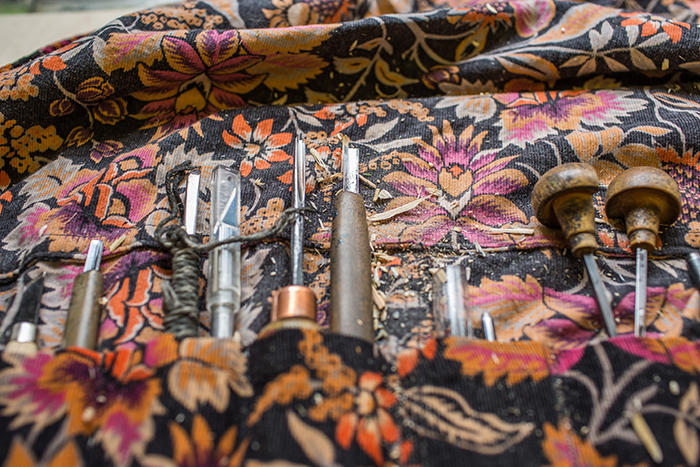 Making a woodcut print is a complex dance. The multiple steps of sketching an idea, hand-carving the wood block, applying the ink and printing the image by hand or with a press can take her days or weeks. “Think of it like a fingerprint,” she says of the relief printmaking process. “What you’ve carved away is what will not print. And then you have to think in reverse because the print will come out in reverse from the block.” Multiple colors are achieved by carving a separate piece of wood for each color, or by continually recarving and reprinting the same block.

Haberkorn was introduced to the medium at her magnet arts high school (“We all thought we were the real-life version of Fame,” she says) and continued to explore its possibilities at the University of South Florida. “My mom was a self-taught artist and always had me doing any art or craft project you could think of,” she says, “so I started selling mice Christmas ornaments when I was 9 or 10.” 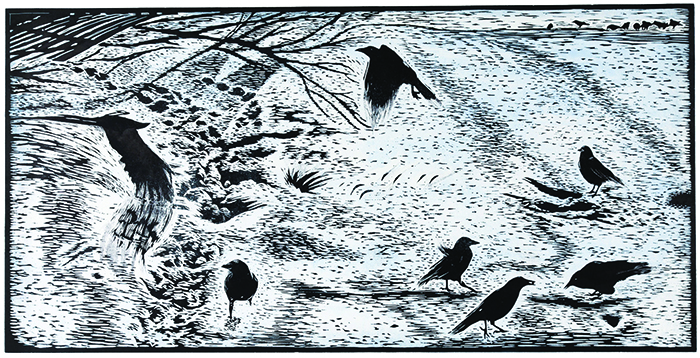 Haberkorn’s Chautauqua bungalow is 3 miles from her studio, close enough for her to bike to work during the milder months and drop by her community garden plot along the way. She lives with her environmental scientist husband, and although she spends most weekdays in her studio, she also teaches, exhibits internationally, and serves as an artist in residence (Breckenridge Arts District most recently). 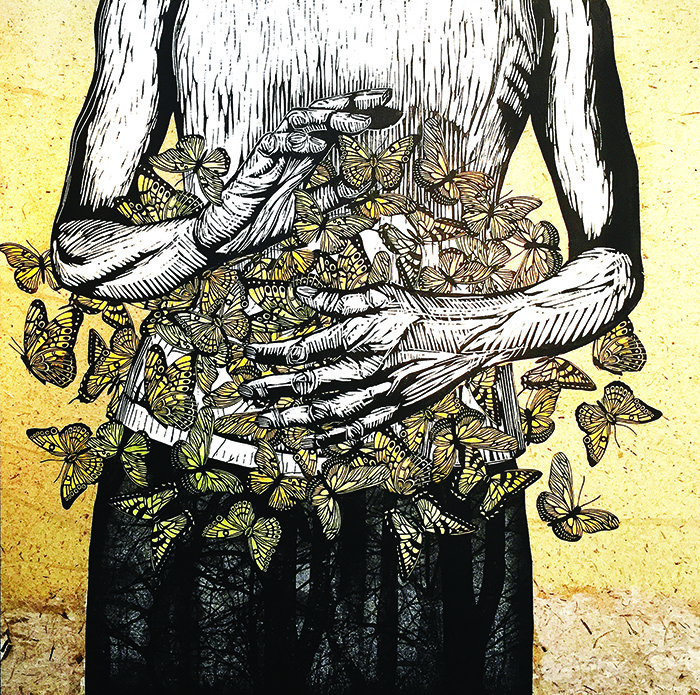 Her prints are displayed in the St. Regis Aspen’s hotel rooms and at Children’s Hospital Colorado’s Highlands Ranch campus. The arts-impassioned masses can also weigh in on woodcut when she showcases her work annually at July’s Cherry Creek Arts Festival and during Boulder’s fall Open Studios weekends. 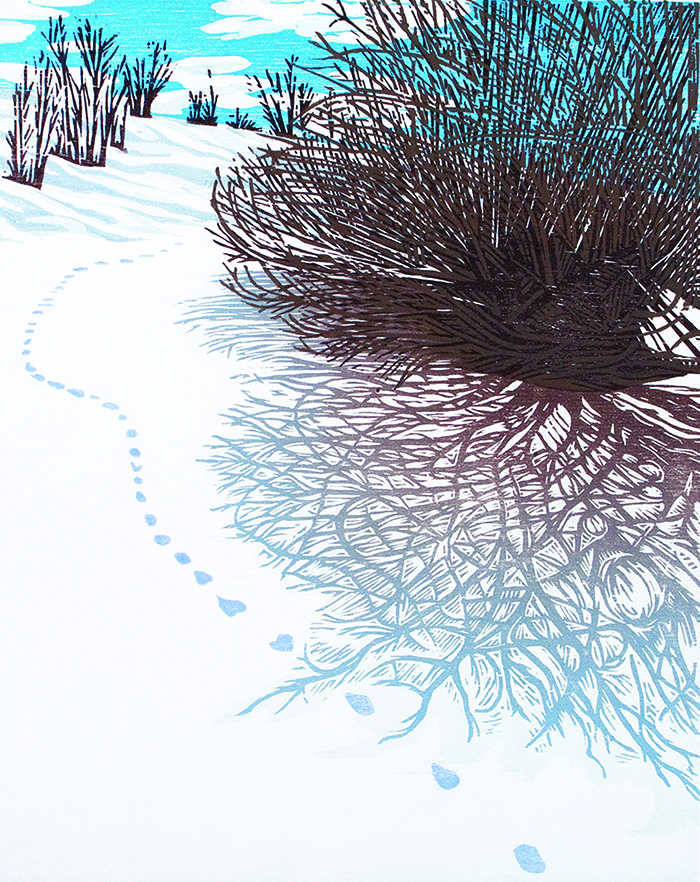 Tracks in the Snow

After pouring hot tea in a nook of her studio, which feels decidedly artsy with its timeworn bookshelves, hulking presses, and Japanese-made carving tools, Haberkorn happily introduces her newest passion: collage. The amalgamation of woodcut printmaking, watercolor, and other elements has her fired up for the next phase. “When it starts becoming too easy,” she says, “it’s time to do something else.”