When the homeowners set out to build a new house in Denver’s Observatory Park neighborhood, they had a clear vision for architect Scott Lieb of Sparc Design and builders Scott Kirkegaard and Chad McMullen of AJ Kirkegaard Contractors (formerly of Appalachian Construction). “They were determined to develop what I’d call a timeless contemporary home—one that achieves elegance through simplicity,” Lieb says. But most importantly, he says, they wanted a space in which they could enjoy the outdoors and Colorado’s abundant sunlight. With the help of landscape architects Scott and Annie Huston of Columbine Design and Larry Kagiyama, a designer with Aspen Leaf Kitchens, the vision was brought to life.

A Seamless Transition
To address the homeowners’ wish for an indoor/outdoor living space, Lieb designed what he describes as a “contemporary take” on a traditional pergola over the back patio (pictured above). “By using floor-to-ceiling windows, NanaWall doors, and the same [tongue-and-groove cedar] wood on the ceiling as the great room, we made that space feel like one continuous room—there is hardly a visible break between indoor and outdoor,” he says.

The homeowners also needed space to entertain outdoors, says Scott Huston of Columbine Design. So in addition to strategically placing foliage and annual pots, the designers at Columbine created multiple seating areas, including wooden built-ins for the dining area under the pergola, and tables and chairs by Thos. Baker. 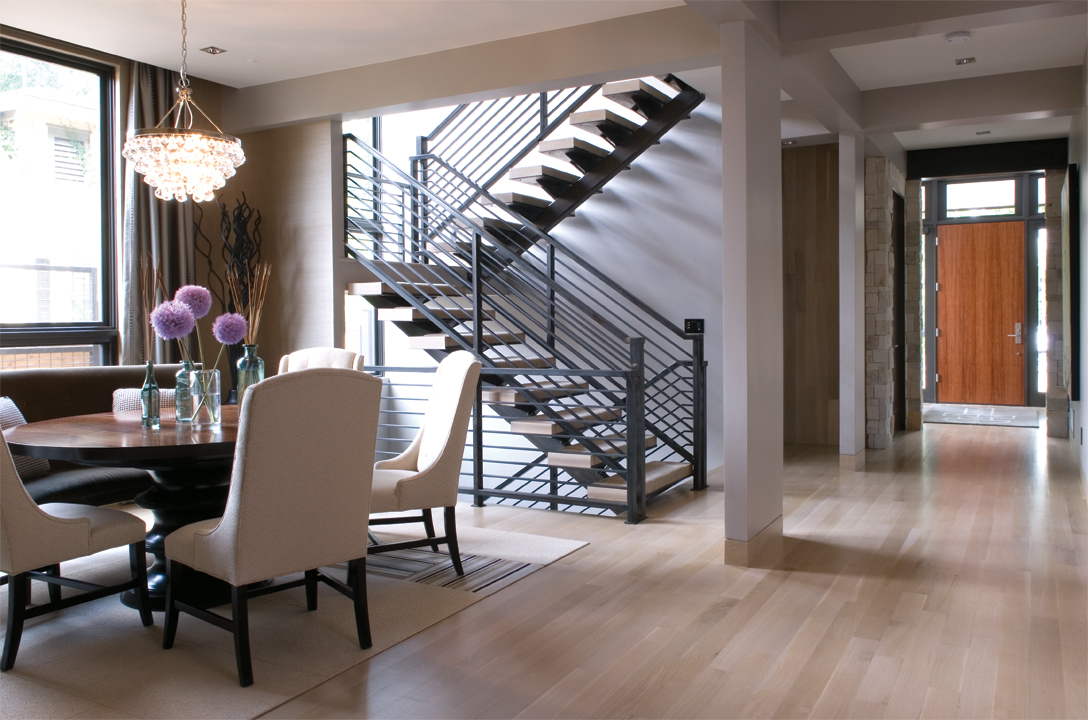 Bathed in Light
In the entry hallway, it’s the natural light—made possible by a two-story window and transparent staircase—that has the biggest impact in the space. “The entry ends up being an interesting and intriguing space merely because of natural light, stone and a simple wooden door,” Lieb says. In the dining area, the whimsical Robert Abbey light fixture, grasscloth wallpaper and Arlington side chairs provide soft contrast to the structural staircase. 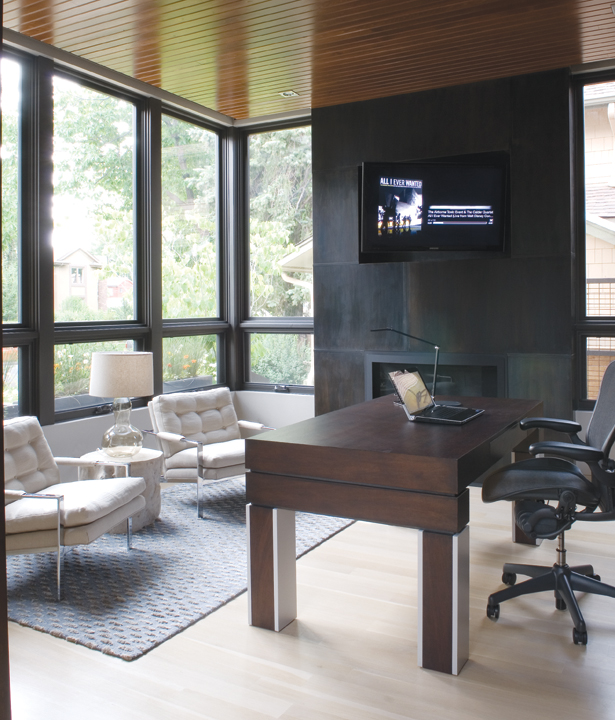 For the sunlit office, Kagiyama created a custom mahogany desk (built by Aspen Leaf Kitchens) that has one hollow leg for concealing power chords and cables. Vintage chairs and a wooden side table soften the blackened-steel fireplace surround. 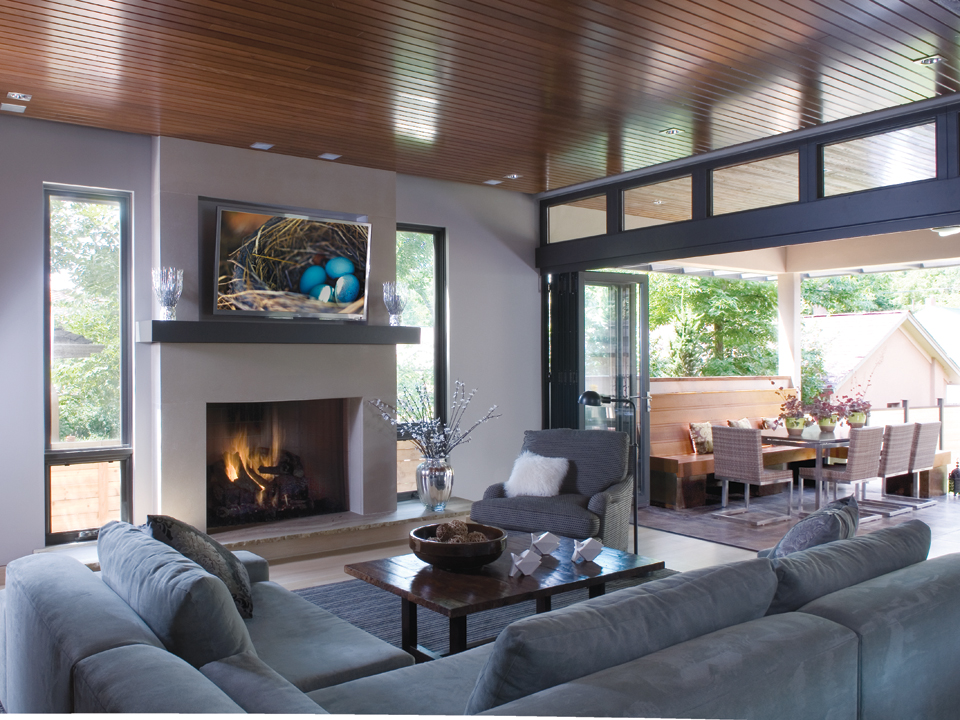 In the great room, the grey Lazar Kubix sectional maintains the overall contemporary-yet-warm feel. The fireplace mantle is by Distinctive Mantles; the “floating” sandalwood hearthstone is from The Stone Collection.

Light and Dark
“The homeowners had no hesitation about using lots of glass to bring light into their interiors,” Lieb says. And this approach carried into the kitchen: “They loved the idea of having transom windows above the kitchen cabinets to bring even more light into the space.” 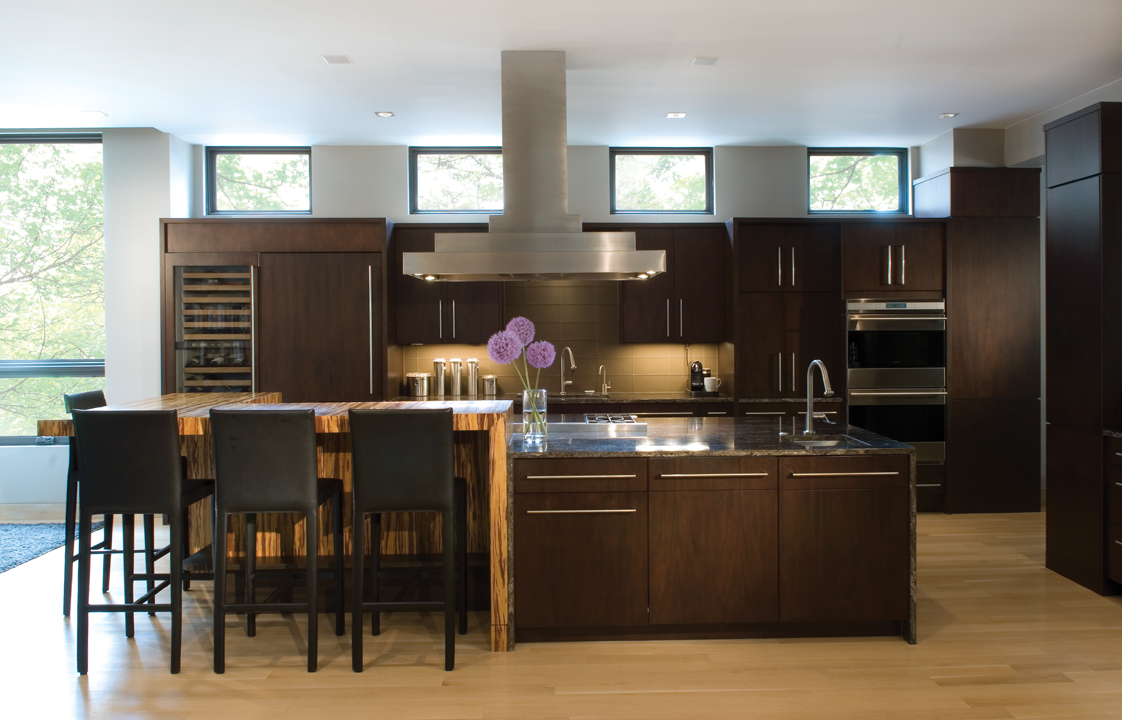 The kitchen is also a study in opposites, the architect says, displaying how “carefully considered contrasts can really bring a space to life.” In this case, the zebrawood of the bar and the blonde-stained pine floor transform what might otherwise feel like a dark kitchen into a welcoming space. That was the idea, says Kagiyama, who was hired to design the kitchen finishes, but after hitting it off with the homeowners, stayed on to design the entire interior. “Inside, the homeowners wanted something very modern but they didn’t want it to be cold,” he says. “So although the house is extremely elegant, we made it very livable for their three little boys by incorporating everything from washable fabrics to the contemporary white stain on the oak, which doesn’t show dust or footprints.”

The finished space features mahogany cabinets with a custom “blackstone” stain (the same wood used for the millwork throughout the house), Orion granite and a glass backsplash by Vogue Bay. Appliances include a hood from Vent-A-Hood’s Contemporary series and an integrated Sub-Zero 700 series refrigerator.

The design of the master bathroom responds to the homeowners’ desire to create comfort and elegance by doing away with distracting details, Lieb says. “Notice the simple, symmetrical vanities that frame a nice view into the bedroom.” Here and throughout the home, the architect’s favorite element is the sleek detail that’s created by keeping the baseboards flush with the wall. Other minimalist design moves include Soss invisible hinges on every door and a recessed blind system. 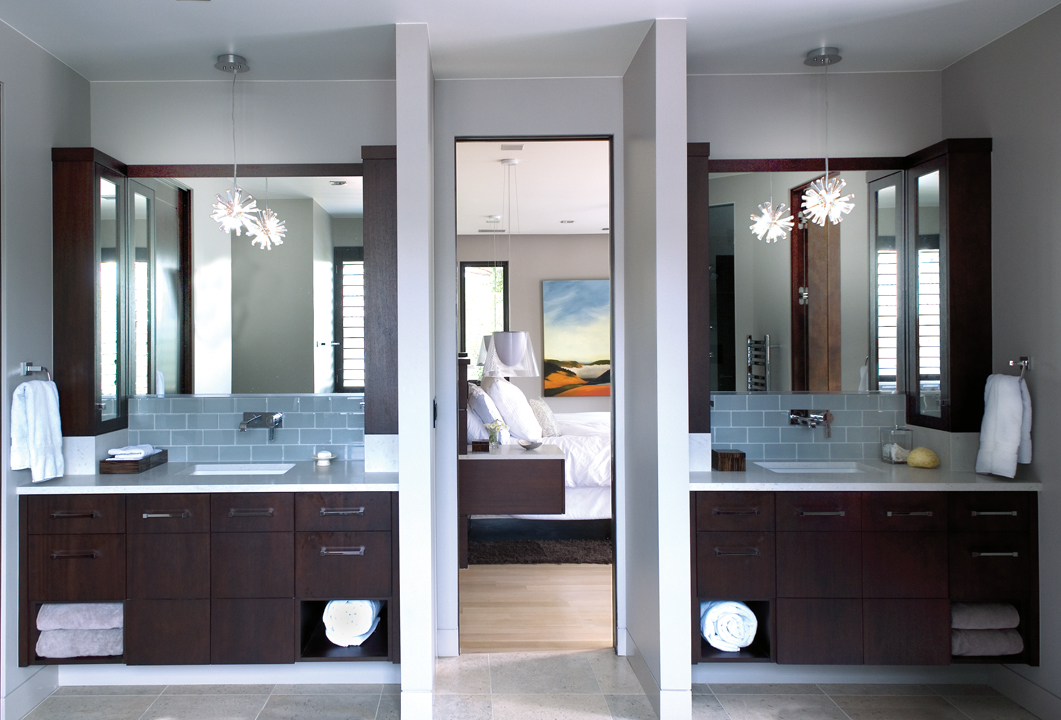 First Impressions
With every house he designs, Lieb tries to minimize the exterior street presence: “I prefer to create an inviting, more pedestrian-scaled streetscape.” With this house, he accomplished that by creating multiple roofline heights. Drawing on the “simple is elegant” mantra, the homeowners chose to limit the exterior color palette to dry-stacked limestone and stucco, and metal accents on the flat roof fascia and soffits—plus a single horizontal band of wood. 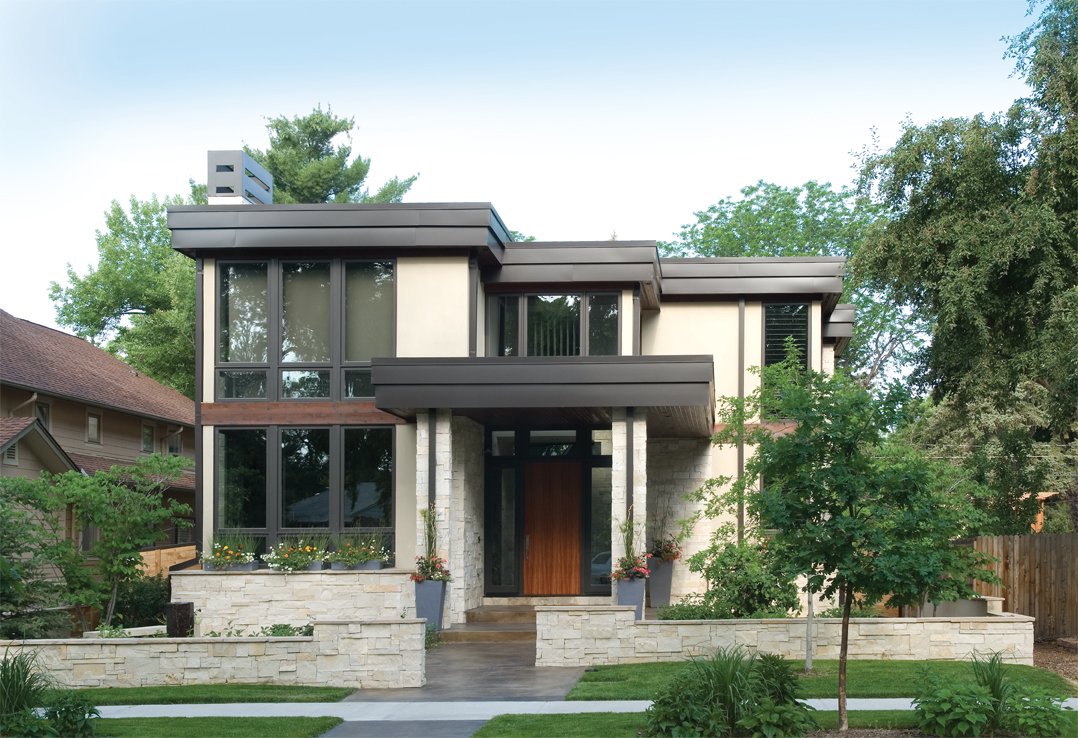 The landscape designers created walls in the front yard to mimic the façade of the house. One of these walls helps to enclose a front courtyard that, says Scott Huston, acts as a “visual transition to the front door and foyer, and also serves as an outdoor room to sit and enjoy the bubbling fountain, the flowers and the street activity.” 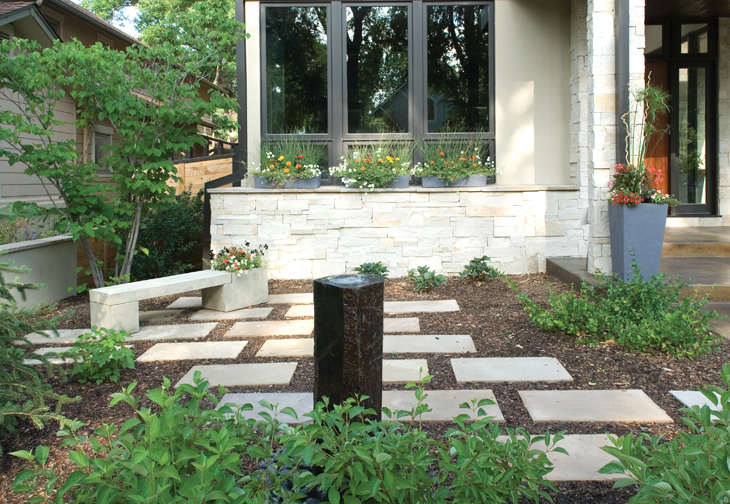 Finishing Touches
Small-scale ornamental trees such as Winter King hawthorn and Eastern redbud were chosen for the front yard so the house isn’t overwhelmed as the foliage matures. The container gardens, composed of dwarf papyrus, fuchsia, begonia, red sweet potato vine and lotus vine, were designed to “accentuate the strong vertical lines of the house,” Scott Huston says. Overall, the containers lend a contemporary look and feel to the space—the “‘icing on the cake’ for the finished product.” 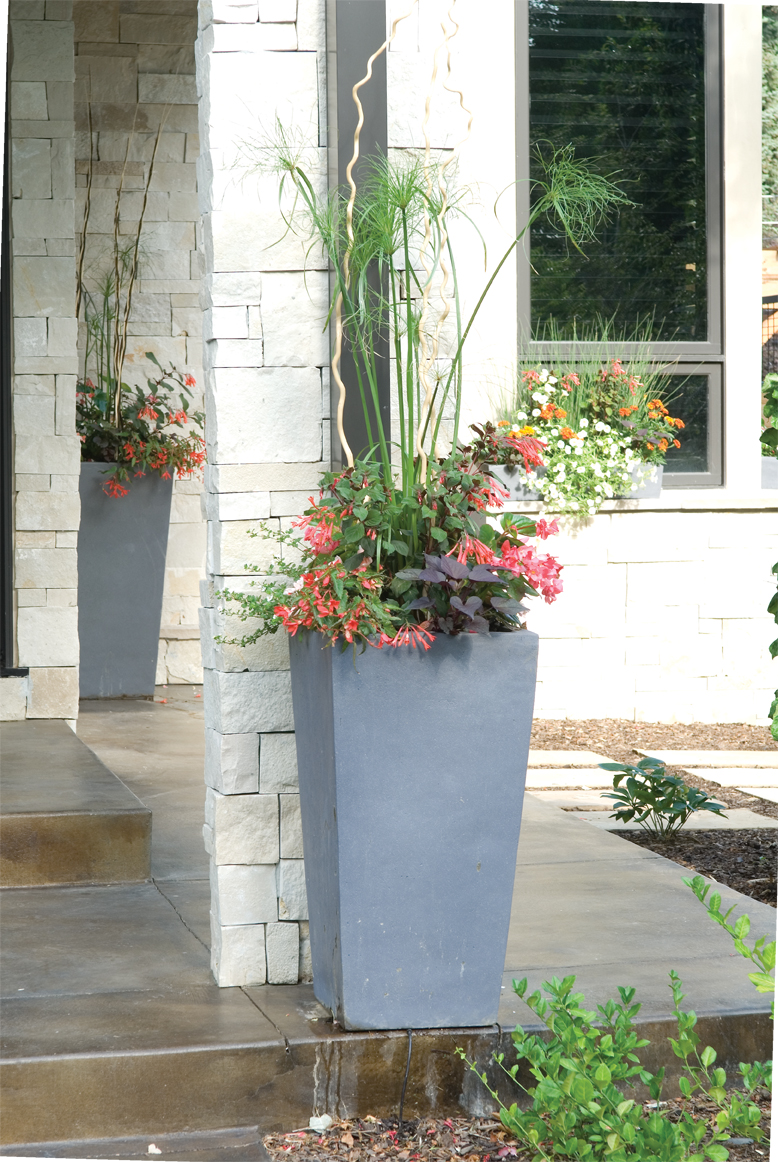 This article appears in the April 2012 issue of Colorado Homes and Lifestyles.
Categories: Interiors, Landscaping & Gardening