From The Ground Up

Amy Owens wanted the curved entryway walls of the Estes Park home she shares with her husband, Stephen, to feel like a “warm hug.” Indeed, their house, artfully built into a ridge atop 60 acres bordering Rocky Mountain National Park, is everything they are: amiable, unpretentious, joyful and full of wonder—a testimony to the idea that a space is the material reflection of its inhabitants.

Their home’s design was dictated by two mandates: to be a comfortable gathering place and to honor the land that surrounds it. Family and friends are most likely greeted by the homeowners themselves from the front balcony—or “waving deck,” as they like to call it—where Amy and Stephen love to relax with a glass of wine and watch the forest after hiking, road biking, mountain biking or skiing.

The couple, who have three grown children, met in their hometown of Cumberland, Maryland, and connected quickly, once they discovered they had worked very close to one another in Allenspark and Boulder. “We always knew we were going to go back and have a place there, and we took a decade to find a property that suited our needs,” Stephen says.

Then, in 2013, they came across this property, bordered by Rocky Mountain National Park on two sides. “The view … you can’t unsee that. It got into our hearts,” Amy says. From that moment on, that view of Longs Peak—its unforgiving, snow-coated flanks presiding over the green, forested valley—acted as the driving force of the design.

Initially they planned to work with the existing home on the site, but it became clear that it would be more cost-effective to start over. (They donated the materials from the old home to the local community.) They brought in Doug DeChant and Adam Harrison from Shepherd Resources Inc. out of Edwards to design the new structure. “We were amazed,” Amy says. “The whole design team came up to the home and spent several days there, walking the land and getting to know us and how we live.”

“The view … you can’t unsee that. It got into our hearts.” — Amy Owens, homeowner

With the Owens’ laid-back lifestyle and taste in mind, the architects crafted the home from humble materials—weathered, reclaimed wood; stone; and iron—and designed an open layout—inspired by old barns—that nurtures togetherness, even when Amy is cooking and Stephen, ever the science professor, is checking the data from the weather station he installed on a hill nearby. “That form facilitated a design where people would gather,” Amy says, leaning in, her blue eyes magnified in smart glasses that match her chic, black sweater. Stephen chimes in: “The house has been done for only a year, and we can’t tell you how many people have been able to enjoy it.”

The team built the home unassumingly into the ridgeline, with minimal disturbance to the land. “We wanted it to look like the house came out of the ground,” Stephen says. To that end, the exterior landscaping was extremely important to the couple, and they hired Park Landscaping to ensure the surroundings would remain as natural as possible. “They photographed the outcrops and replaced them in the exact alignment of how they found them,” Stephen says. The garage has a living roof, too, landscaped to look exactly like the land. “We had guests one time who came downstairs and said there were seven mule deer eating all the plants on the roof,” Stephen says, laughing.

“They photographed the outcrops and replaced them in the exact alignment of how they found them.” — Stephen Owens, homeowner

There are windows and balconies everywhere, which, coupled with warm furnishings chosen by lead interior designer Yvonne Jacobs, formerly with Slifer Designs in Edwards, invite you to cozy up and watch the weather roll in. “The true artwork of the home is the views,” Amy says. Stephen nods in agreement with his wife and then adds, “You should really come up and visit sometime.” 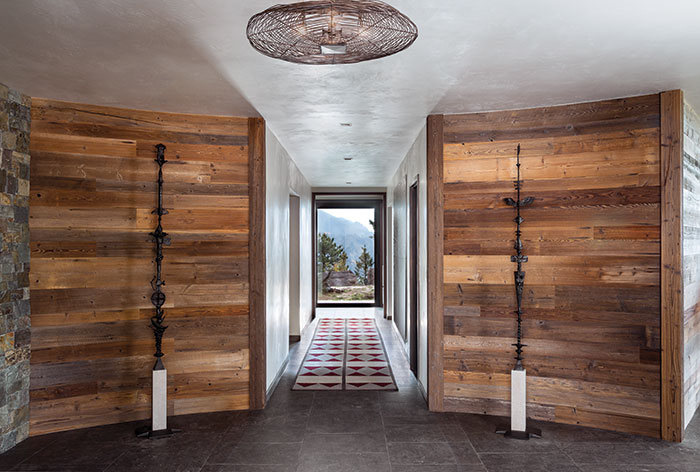 Curved, reclaimed-wood walls warmly welcome guests as they step into the home. The bronze sculptures are by artist Tom Corbin. “I got the one on the left for Steve,” Amy says, explaining that it’s a symbol of the evolution of man. When the home was near completion, Stephen surprised Amy with the counterpart on the right, called Woman’s Rites. 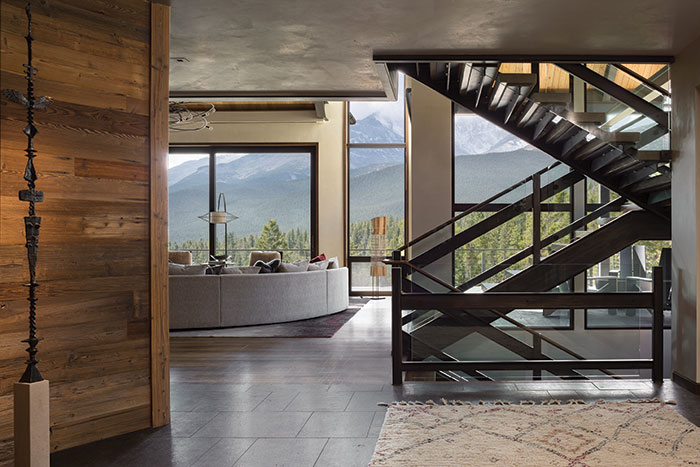 The glass and steel “floating stairs,” cantilevered off a center steel stringer, keep the space open, so as not to obstruct the view of Longs Peak. The curved couch from Bright Chair fosters conversation, and the center standing lamp by Hawaiian artist Paul Foeckler of Split Grain draws the eye toward the majestic peak beyond. 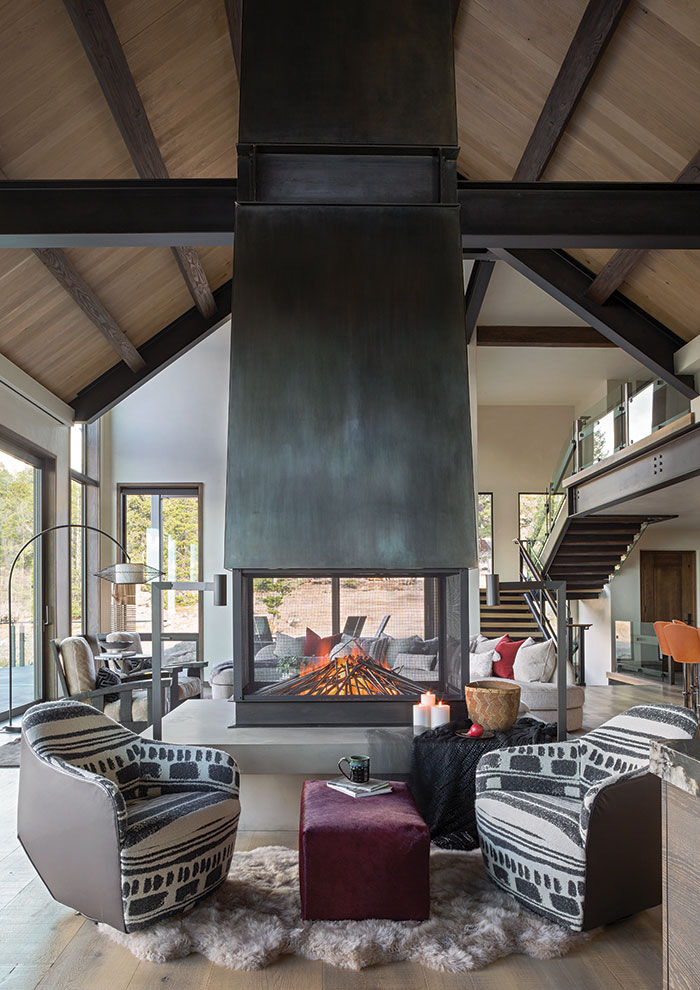 A four-sided propane fireplace by Brooklyn artist Elena Colombo of Fire Features serves as the heart of the home. “This was one of the more complicated pieces,” Stephen says. It’s actually suspended from the structural roof trusses, a feat that adds levity to the heavy structure. “Until they figured out the fans, it sounded like a Boeing 747 landing in our living room,” he adds, laughing. The modern swivel chairs in the foreground are from Walter Knoll. 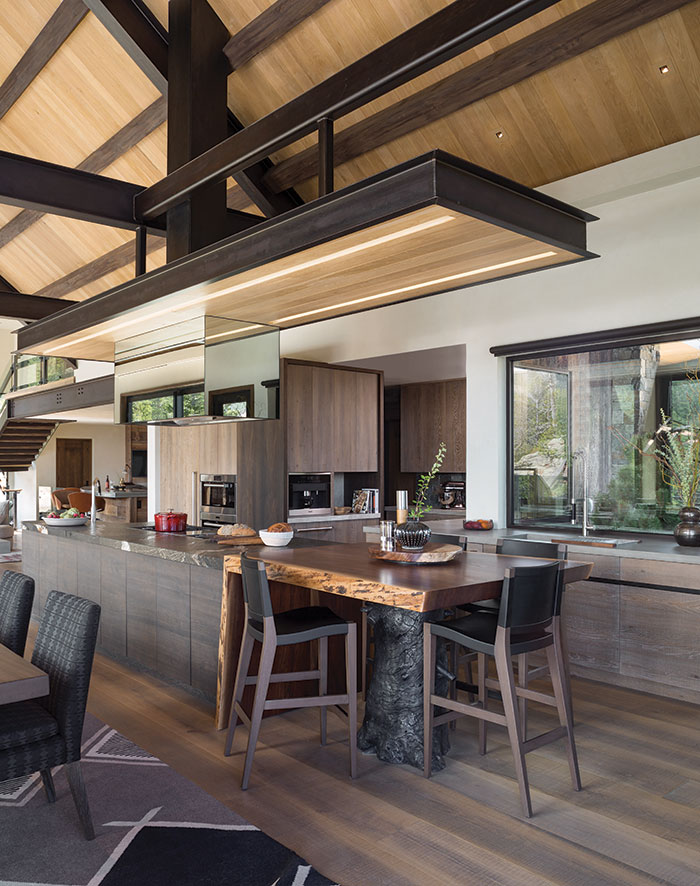 The island consists of a honed slab of walnut from a tree near the Owens’ East Coast home; it sits atop a trunk from the nearby woods, which Liquid Metal Coatings covered in bronze. The countertops are leathered granite. The mirrored hood is a neat trick—it reflects the nature behind it and avoids too many straight lines. “It just kind of falls away,” Amy says. The chef’s kitchen is Amy’s domain; she has her own baking pantry in the back. Heartwood Custom Woodworks in Eagle did the woodwork, including the cabinets. 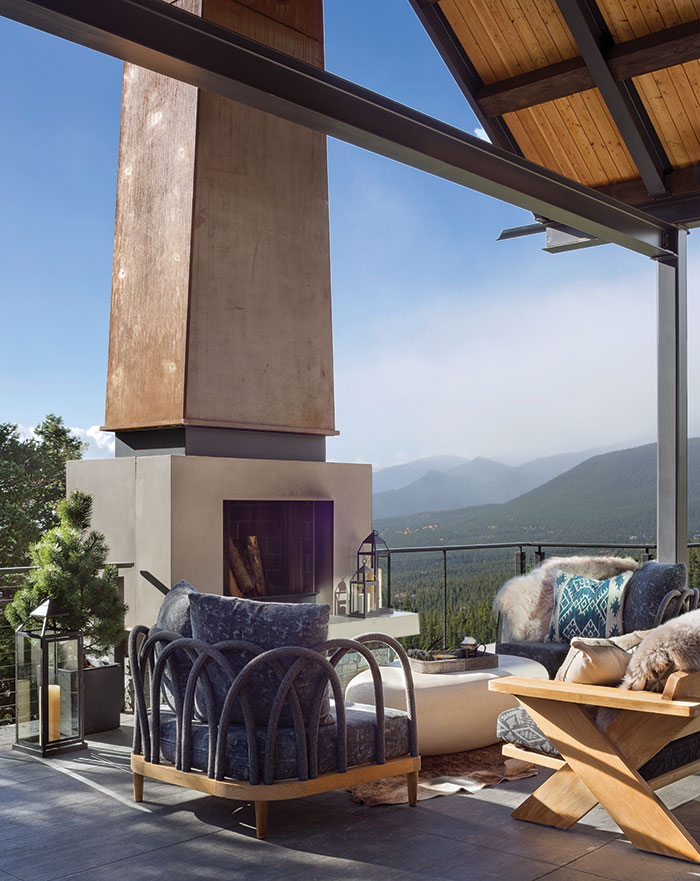 The back deck overlooks Twin Sisters Peak and the forested valley below. “We’ve lost a few chairs out there to the wind,” Stephen says. The real-wood fireplace by Fire Features has a corten chimney, also by Fire Features, that mirrors the chimney inside. 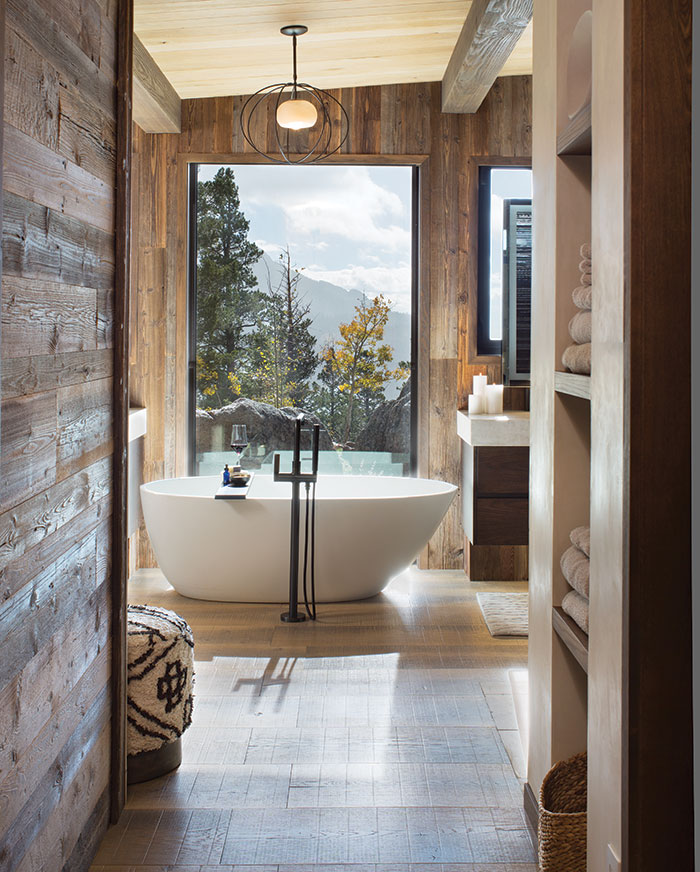 A soak in the Wetstyle egg-shaped tub in front of the floor-to-ceiling window is utter luxury—the views make it feel almost as if you’re bathing outside. Vanities with free-standing mirrors rest on either side. 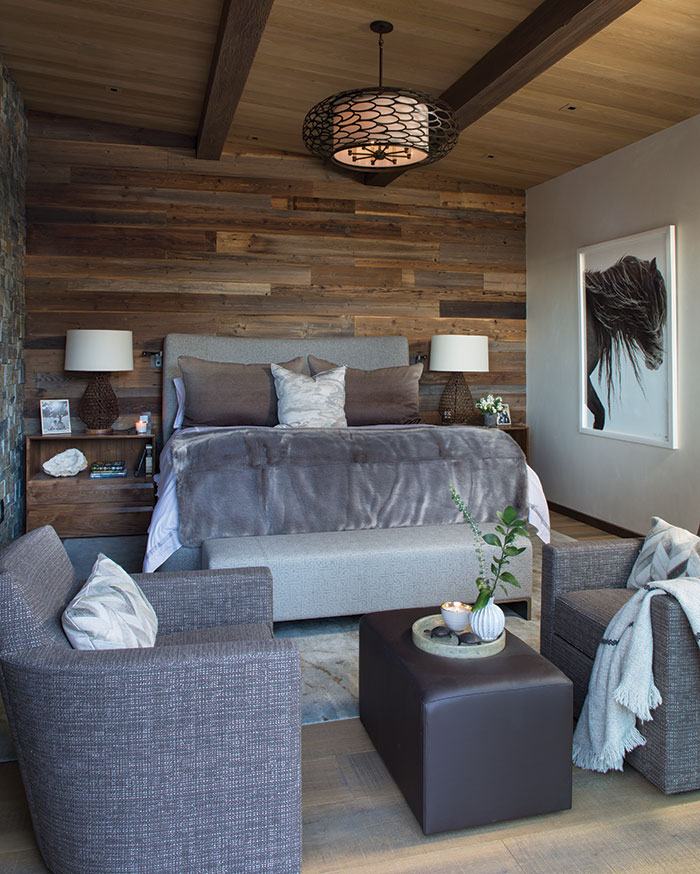 A captivating photo of a horse, taken by artist Drew Doggett, presides over the master bedroom. “There’s something about that photo that’s just magnetic,” Amy says. Elsewhere, gray neutrals, reclaimed wood and stacked stone lend a calm, understated elegance. The bed is from A. Rudin. 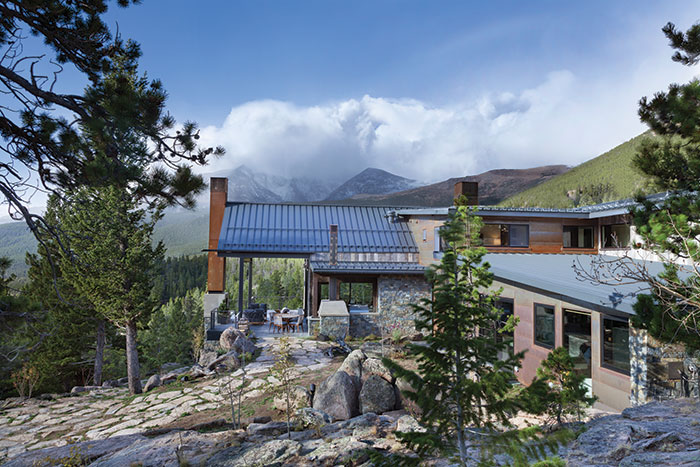 The deck’s outdoor kitchen features a wood-fired pizza oven and propane stove. Homeowner Stephen Owens uses the rock pathway on the left to haul firewood in his ATV. The Owens aimed to make their home as green as possible, so they installed solar panels on the southwest-facing roofs. 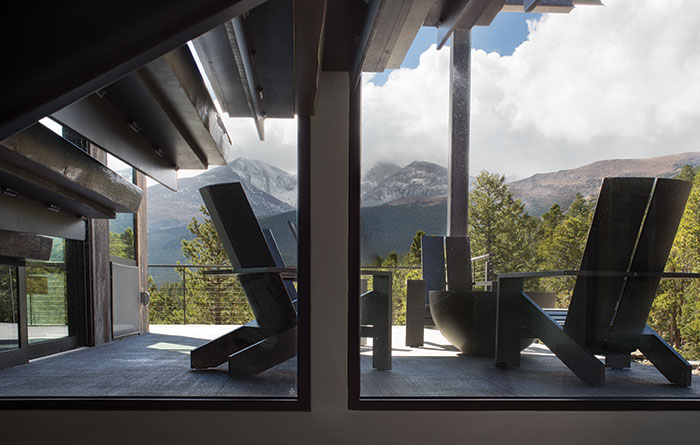 The architect nicknamed the deck on the front of the home the “waving deck,” because “it’s where we stand with wine and wave at people as they arrive,” Amy says. The exterior of the home is wrapped in fireproof corten steel, which will rust over time. The gas fire bowl is from Eldorado Stone.