Floating Beneath the Flatirons

To ground the structure and bring a sense of warmth to the rooms, designer Mickey Ackerman chose a rich Honduran mahogany for the floors and ceilings throughout the home. 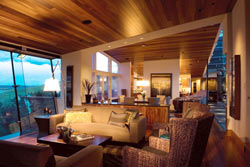 To ground the structure and bring a sense of warmth to the rooms, designer Mickey Ackerman chose a rich Honduran mahogany for the floors and ceilings throughout the home. 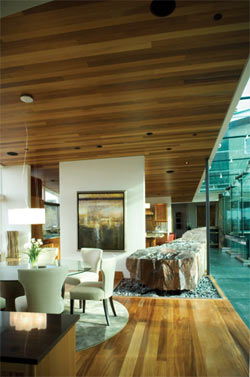 A rock fountain enhances the feeling of continuity with the landscape, and also provides humidity and the sound of running water. Ackerman and McMullen searched numerous stone yards to find a boulder that came from the same geological formation as nearby rocks.

When architect Matt McMullen went looking for inspiration for an extensive remodel in the hills above Boulder, he found it in a thunderstorm. One late spring day eight years ago, he was visiting the site when clouds began to form over the mountains and a cold wind came up, slamming open doors in the home. Minutes later, a violent storm moved over the hillside, sliding in from the west and stretching out onto the plains. By the time the storm had passed, McMullen knew what belonged there: a home that would capture the eternal movement of the weather and landscape at this breathtaking spot where the mountains emerge from the plains.

Located on the edge of Boulder Open Space directly below the Flatirons rock formations, the home hovers over the city from its hillside perch as if in intimate conversation with Boulder's unique geography. To give the house a feeling of transparency and continuity with the landscape, McMullen designed innovative Pilkington triple-laminated structural glass walls to frame the views of the Flatirons to the west, the plains extending infinitely east and the foothills arcing towards Wyoming in the north. “This is where the Great Plains meets the foothills of the Rockies,” McMullen, of Architectural Manoeuvres, p.c., explains. “This house is an exploration of the transition between the two.”

Faced with the daunting challenge of creating the interiors for such an innovative space, the owners brought in designer Mickey Ackerman of Amirob Interiors to collaborate on the project. Over the course of two years, Ackerman carefully selected the home's distinctive finishes—every piece of tile, wood and furniture—from stores, studios and stone yards across the country. He designed each room to be comfortable and livable, but also consistent with the clients' and architects' contemporary vision, selecting finishes and furnishings that are “quiet” and minimal, in order to accentuate the architecture and the views. “I wanted the furniture to be understated because the architecture is so powerful,” Ackerman says.

The home's showpiece is its cantilevered-glass living room, which is suspended over a hillside that falls steeply away to reveal the sweeping panorama of Boulder below. A foot of mitered glass flooring where the windows meet the floors lends the sensation of floating over the plains, as if in a tree house. To ground the structure and bring a sense of warmth, Ackerman chose a rich Honduran mahogany for the floors and ceilings throughout the home. Careful attention to lighting under and around the perimeter of the glass creates the sensation of a “ring of light” surrounding the upper floors when dusk falls. “At night, it makes the floor feel like it glows,” Ackerman says.

While the eastern face of the house juts over the plains, the home's western side merges with the mountain, wrapping around a large boulder that serves as the structure's focal point and makes the mountains appear even closer than they are. A floating glass stairway flows past the boulder, over a pool lined with Mexican river rock and up to the master suite, providing a spiritual space where the owners can literally “walk on water” as they move between the public and private spaces in the home. The staircase leads to a glassed-in master sitting room with staggering views of Boulder's mountain backdrop.

Below the main level lies the “fun floor,” which features a wine room, spa, home theater, library and office, all linked by a Jerusalem-travertine-walled hallway and illuminated by a glass ceiling that allows natural light to enter from the upper levels. From there, a striated Macassar ebony-walled stairway descends as through layers of sedimentary rock to two mirror-image sleeping suites—one trimmed in maple, the other in cherry—designed for extended visits by the owners' two grown sons and their families.

Ackerman's thorough attention to detail—from ebony that captures the foothills geology to a canoe-shaped stone in the kitchen that echoes nearby formations and brings the outdoors in—creates interiors that masterfully complete the task that McMullen's architecture set for this ambitious structure: to evoke the natural world and merge with its contours. “The best way to describe the home,” Ackerman says, “is like a very big tent. You're living on the outside but you happen to have a few glass walls.”