Everything Old is New Again

This new French Country house in east Denver may have taken only seven months to build, but it was centuries in the making. Antique French wood-and-iron doors grace the front entry; 200-year-old clay pots top the chimneys of the limestone structure; and a Portuguese cupboard from 1633 serves as an entertainment center. Even the new materials and finishes give the impression of an old house, and the antique furniture that fits this house so well has long fit the family: homeowners Rick and Barbara Wells inherited some pieces and collected others during more than three decades of marriage.

The Wells had renovated and lived in several older homes in Kentucky and Washington, D.C., before they moved to Denver three years ago. It was then that Rick decided building a new home would be his first project after retiring from a 30-year construction career. “I worked with condos, apartments and hotels, but I had never built a house,” he says. “We wanted all the characteristics of an old house, but all the modern conveniences of new construction.”

The 3,600-square-foot, two-story home was built from a plan by Jack Arnold, a Tulsa architect who specializes in luxury Old-World European styles. Ten-foot ceilings give the home a lofty feeling, and floor-to-ceiling French doors and transom windows bring in abundant natural light. Rick Wells served as general contractor, tweaking the design to fit the couple’s empty-nest lifestyle, culling resources from salvage yards and hiring local artisans to give the home its distinctive charm. 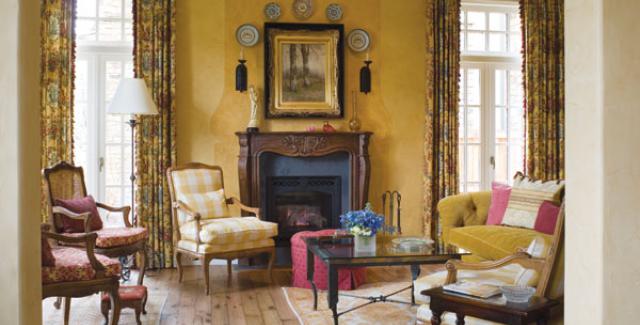 Many of the elements of the house are old, such as re-fitted antique light fixtures, reclaimed oak plank flooring and ceiling beams salvaged from a school in Denver’s Washington Park neighborhood. Other materials, like the walls, simply look aged. “I worked with the drywaller to get the appearance of old plaster walls, then had them faux finished,” says Barbara Wells, who tackled the interior design work herself.

Barbara spent hours poring over websites and collecting hundreds of fabric, tile and paint samples. “For me, everything starts with the fabric,” she says, pointing to the lively linen print in the living room (Saison de Printemps fabric from Waverly’s La Belle Provence Collection), and a more subdued blue-and-beige faux-silk plaid in the dining room (Banu 085 by Claridge Textiles, Inc.). “I find the fabrics first and pull colors from them for everything else.”

When it came to designing the kitchen, the couple collaborated to create an authentic Old-World ambiance peppered with modern amenities. Barbara worked closely with a custom shop, requesting cabinets that look like stand-alone pieces of old furniture of different woods, sizes and heights. “I tried several shades of blue paint and brown stain and combined them on sample boards until I found just the look I wanted,” says Barbara, who also requested a distressed look that mimics natural wear and tear. Meanwhile, Rick designed the copper range hood and found a local craftsman to fabricate it.

New Spanish floor tiles, in a mix of different colors and shapes, have the look of antique floors without the high cost. “We wanted the house to look old but also be functional,” Rick says. “We didn’t try to hide the new faucet, sink and dishwasher, but we did use honed granite and wood countertops to blend with the cabinets.”

Although new, the house is already filled with the family’s own stories—told by a stunning walnut china cabinet Rick’s grandparents commissioned in the 1930s, a painting by Barbara’s sister, and familiar antiques that graced the couple’s many homes during their marriage, freshly reupholstered for this new chapter.

After living in old houses and building new, the homeowners have found a happy place that combines the best of the two. “Old houses may have good bones and features, but they can be cold and drafty. This house has the same charm, but it is extremely energy efficient, has all the modern conveniences—and the floor plan is the best I’ve ever seen,” Rick says. “Barbara and I still walk from room to room and can’t believe we pulled this off.”

Click here to find out more about this project's products and pros.