Dining Spaces Made for Lingering

“He was Diana Ross, and I was The Supremes,” quips architect Eric Mandil about the roles he and interior designer Sean Hughes played on a recent project that spawned two commodious and comfortable dining areas in a Denver home. Mandil, a Colorado Homes & Lifestyles 2016 Circle of Excellence winner, founded his firm 40 years ago, and Hughes has been part of the team for 18 of those. With Hughes taking the lead, the duo fashioned two distinct spaces that speak to their abilities to design rooms where people want to be.

INSPIRED BY COLOR CHOICES “We want people to use the formal dining room for more than just holidays,” says Mandil. “It should be a flavorful, approachable and inspired space.” The duo selected furnishings from the homeowners’ previous San Francisco digs—a table with carved-glass legs, shaped chairs and a boldly patterned red rug—as favorable starting points. “You don’t see blown-glass legs very often, and it was great to begin with something so unique,” says Hughes, noting that the dining chairs, with their curved backs and upholstered seats, were made with dinner-party lingering in mind. “They strike the perfect balance between form and function.” »

In response to the blaze of red, the designers spiked the space with near-turquoise walls to match the rug and introduced a trio of Indonesian effigy sticks. “The owners liked the views out the windows, so we saw these as an alternative to drapes,” says Hughes. “They add texture and provide contrast with the slick and more-stylized things in the room.” 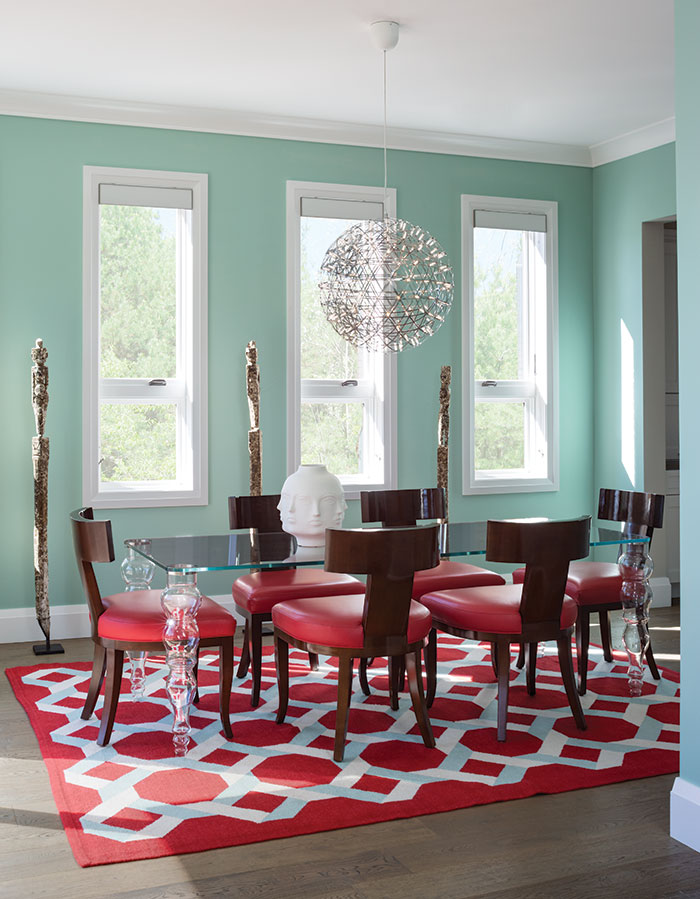 Shades of blue make a statement in the more-casual breakfast area. “They tie the space to the twin navy tête-à-têtes in the adjacent living room,” Hughes says. Here, the designers chose furnishings in keeping with the owners’ penchant for sculptural pieces. To wit: the oval Saarinen table and swooping Norman Cherner chairs. “The chairs have a modernist vibe, and the backs are like big, sweeping wings in constant motion,” Hughes says. “The curved shapes are also softer elements that are a nice contrast to the linear nature of the room and the rest of the house.”

Accessories from the homeowners’ collection provide an Asian accent. “The wall plaques and gold statues recall the 1950s, when similar design-mixing prevailed,” says Mandil about the midcentury-modern-meets-Asian motif. “It’s retro—refreshed.”

ATMOSPHERIC LIGHTING “If you and the food don’t look good, you’re never going to go in that room,” Mandil says. In the formal dining space, the tiny LED cylinders in the chandelier are like high-tech twinkly lights that provide a warm and festive aesthetic. “Pattern-wise, you get these geometric, trellis-type shapes that pick up on the rug but on a different scale,” adds Hughes. The tone shifts in the nook, where the dragon motif on the shade ties to the room’s other Asian elements. “In the formal dining room, the rug is the statement piece, but in the nook, the custom fabric on the lampshade elevates the space,” he explains.

FURNITURE & LIGHTING Studio Como, because they have amazing lines from around the world, plus great taste and sense of style.

CUSTOM LAMPSHADES Lili Marlene. “She can work with any fabric,” says Hughes, “and the difference even a little trim makes is amazing.”

ASIAN GOODIES DecorAsian, for their vases and other accessories, and new pieces of lacquered cabinetry.