Denver’s Magnolia Hotel Cashes in on a Fresh Look

​A stroll through Denver’s downtown district is replete with converted historic buildings. Once farming equipment factories, butcheries, marketplaces and even churches, these buildings have been given a second life as luxury condos, hip restaurants and yoga studios.

Such is the case for Magnolia Hotel, a 13-story landmark at the corner of 17th and Stout that was originally built in 1910 to house a First National Bank. In 1995, the Holtze family bought the building and opened the first of six Magnolia Hotels across the U.S. Now as a go-to resting place for business travelers and tourists, the boutique hotel recently underwent renovations by OZ Architecture that have modernized its design, while celebrating the building’s century-old history. Take a tour of its fresh look below.

The lobby (above) greets guests with a wall of safety deposit boxes—a nod to the hotel building’s banker beginnings. An oversized plush sofa, brass-topped cocktail tables, and sleek pendant lights give the entry seating area an elegant yet comfortable vibe. At right, a wall between the lobby area and the on-site restaurant, Harry’s Bar & Grill, was knocked down during the renovation, to open up the floor plan and invite more natural light in. 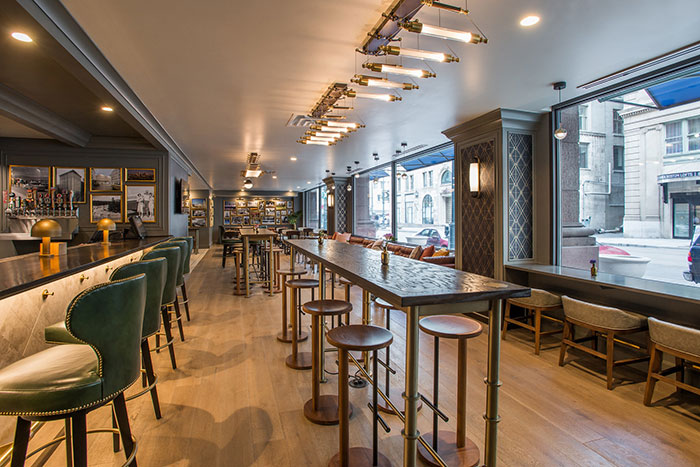 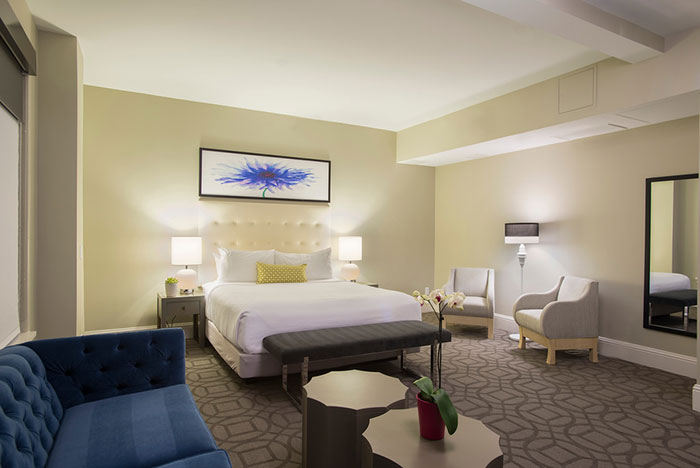 In the first phase of renovations, 51 guest rooms were added by splitting some of the extended-stay suites in two. The hotel now offers 297 guest rooms, 51 of which include kitchens and living rooms. Each room received a cosmetic makeover, featuring velvet sofas, tufted headboards and other chic styles reminiscent of the 1920s.