Collecting the Spirit of Christmas 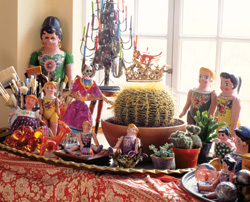 Vintage and newly made Mexican cabaret dolls strike Williams’ fancy. “I study the creativity in the details—the earrings, clothing, hairdos and the fun names written on the dolls,” she says. A vintage cut-tin Mexican candelabra tree is almost as prickly as the golden barrel cactus topped with a French reliquary crown. Paintbrushes and others treasures complete the tableau. 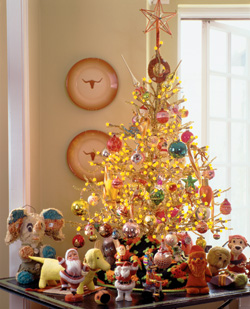 Williams found this reproduction of a 1950s golden light tree at a local florist shop. She decorated it with a selection of childhood memorabilia, including Goofy dressed as Santa, an autograph dachshund complete with signatures, and an elephant piñata. The ornaments from the 1950s, 60s and 70s were collected over time. 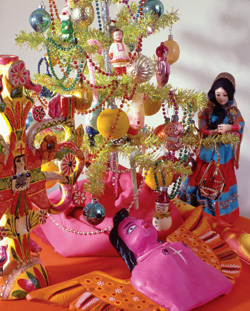 Mardi Gras beads and Russian eskimo and spaceman ornaments festoon a small tree in the Mexican-themed bedroom. A brightly painted wooden angel and a vintage Mexican tree of life candelabra add color to the lively display.For artist and CH&L Editor at Large Niña Williams, Christmas is a time to pull out all the stops and display her beloved collections of international ornaments and folk-art decorations. Peasant dolls and Father Frost figures from Russia, carved angels and cabaret dolls from Mexico, and American childhood icons from the 1950s help her celebrate the season in her Denver art studio/guest apartment.

Located in a historic 1920s apartment building, the entire studio is an expression of Williams’ whimsical approach to design. Here she paints portraits and landscapes, and experiments with fine arts photography. “The studio, which also serves as a guesthouse, is my ‘imagination tank’ to play out ideas, as well as the receptor for many special collections,” she says.

Against a backdrop of mid-century-modern-inspired furnishings and vivid colors, she seamlessly introduces an array of holiday ornaments and decorations. “I tend to be very fantasy-oriented and look at everything as a story,” says Williams, who sets up intricate and fascinating displays in every room. “The size of my Christmas trees shrank as my daughters grew up. Now I adore table-top trees–they are easy to transport and store, and I can spread my collections among more trees.”

One such collection nestles under a sparkly silver tree. The vintage figures include roly-poly peasant stockinette dolls and Santa-like Father Frost figures made of pressed cardboard and cotton. Russian glass ornaments come in an  incredible array of fruits, nuts, shells and animals. “You will find 1950s and 60s ornaments of dirigibles, rockets, and spacemen, along with enchanting characters from Russian fairy tales,” says Williams. A pickle-shaped ornament represents an old tradition—whoever spots it gets to open the first present.

While she has collected vintage Christmas ornaments for years, picking them up at flea markets and antique shops, she finds that E-Bay allows her to reach dealers all over the world. “It is so much easier when you have Internet access to dealers as far away as St. Petersburg,” she says. “This has had a huge impact on my collections.”

Inspired by her grandmother, who had a great interest in Mexican folk art and culture, she decorated the bedroom in a mostly-Mexican theme. A bright, striped sarape dresses the bed; the shelves and table tops are filled with gatherings of international dolls and colorful carved figures. “I appreciate the individuality and handmade quality of folk art,” says Williams, who chooses “everything from the kitschy to the sophisticated.”

In the living room, a tiny tree with hundreds of golden yellow lights represents her American childhood, complete with Disney’s Goofy character dressed as Santa and a 1960s autograph hound. Another vignette includes a golden barrel cactus affectionately named after the Mexican artist Frida Kahlo, Mexican papier-mâché cabaret dolls and—with a nod to the art studio—paintbrushes. Although Williams loves her theme trees, she takes delight in mixing things up. She centers her vintage Russian collection under an American aluminum pom-pom tree from the 1950s and incorporates East Indian dolls near a Mexican clay tree of life. American Shiny Brite Christmas balls, Czech beaded glass ornaments and German Steiff toys pop up in unexpected places. Never a purist when it comes to decorating, Williams says, “I try cross-cultural combinations—a Mexican matador doll next to a red coral Chinese Buddha. I try to be visually inventive; after all much of the spirit of Christmas is child’s play.”