The “14ers” might sound like some sort of sports team adjacent to the San Francisco 49ers, but to initiated climbers, nature enthusiasts or pursuers of Colorado’s natural wonder, “14er” is no strange term.

Colorado has 58 mountain peaks exceeding 14,000 feet — called 14ers, or fourteeners. That’s more than any other state, and outdoor enthusiasts of all skill levels have long explored the ample hiking trails, wildlife, stargazing hotspots and more. 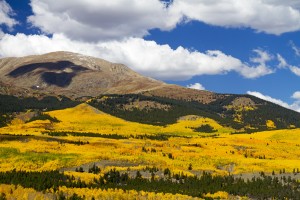 The tallest 14er — the tallest mountain in Colorado — is Mt. Elbert, with an elevation of 14,440. There are five routes leading to the summit of the mountain, which is named after Samuel Elbert, who served as a territorial governor of Colorado in 1873-1874 and as Colorado State Supreme Court Justice for 12 years.

The standard route, via the Northeast Ridge, begins from the North Mt. Elbert Trailhead just outside of Leadville. The large parking area on the left side of the road also has restrooms on the premises.

There are a few things beginner hikers need to take into consideration, including a trail’s elevation gain. This refers to the total amount you will climb in a day. It, along with round-trip distance, are some of the most important ways to predict how strenuous a trip will be. After all, hiking 5 miles on a flat, even surface is much easier than scaling 5 miles up a slick mountain trail.

Even though Mt. Elbert is the second-highest mountain in the lower 48, the hike is relatively easy and safe, experts say. Coloradoan.com names it among the easier of the 14er hikes, and it’s generally considered a Class 1 on the Yosemite Decimal System, which most guides use to rate the difficulty and danger level of a climb. Class 1 means that there are well-marked and worn trails and that no route-finding or scrambling (using your hands) is necessary. Beginners can also turn their attention to some of Mt. Elbert’s fellow 14ers, which boast lesser mileage and elevation gain than the more difficult climbs. 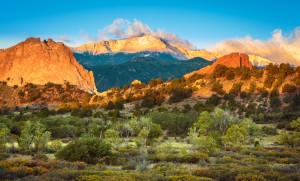 Pikes Peak behind Garden of the Gods

Pikes Peak, with an elevation of 14,115, inspired the Katharine Lee Bates poem “America the Beautiful.” Bates stood atop the peak for about a half-hour in the summer of 1893 and was inspired to write poetry by the views visible from the summit. This climb is also friendly to those looking to ascend their first 14er, with well-trodden trails and ample spots for picnicking, observation and rest breaks along the way. It’s also a friendly option for those looking for a leisurely hike rather than summiting. Some seasoned climbers name Pikes Peak the easiest of the 14ers, with an elevation gain of 1,200 feet and a round-trip distance of 5.5 miles.  The standard route starts at the Devil’s Playground Trailhead, where parking is available. 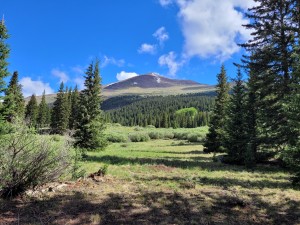 Mt. Bierstadt is also considered by many hikers to be among Colorado’s easiest 14ers. It offers hikers a mostly gentle climb, although several sections are steep. Its elevation is 14,060 feet, with an elevation gain of 2,850 feet and a roundtrip distance of 7 miles. It’s generally considered to be a good option for younger hikers. Those who want an added challenge often continue to hike to the nearby Mt. Evans, along a ridge known as The Sawtooth. This is an intermediate-level hike, and both Mt. Bierstadt and Mt. Evans are considered to be Class 2 climbs. This means that hikers can expect trails that range from semi-worn to absent entirely, and that route-finding may be necessary. Trails might be steep or slick, and scrambling might be required in some areas. 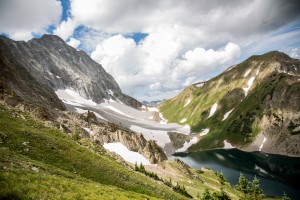 Seasoned climbers might turn their attention to Capitol Peak, which is among the most difficult 14er climbs with an elevation of 14,130 feet and an elevation gain of 5,300 feet. It’s made up of rugged terrain and boasts a strenuous upward climb. There are many exposed and loose rocks, and there are few places to take a break or rest.  Capitol Peak reaches 14,137 feet in the Maroon Bells-Snowmass Wilderness of the White River Forest and even the “easier” trail requires you to pass through Knife Edge, where at least two deaths have been reported. 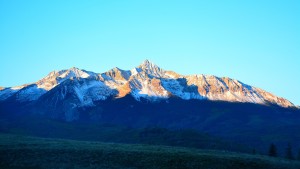 Mt. Wilson is also often ranked among the most difficult 14ers to climb. The route usually involves a fair amount of snow travel with ice axes, scrambling and rappelling. There are also four small glaciers at the summit of Mt.Wilson, which add to the weather conditions and elements that climbers will need to be aware of. Special precaution is needed along the upper third of the ascent, where loose rocks and challenging terrain have contributed to several deaths over the years.

Both Capitol Peak and Mt. Wilson are Class 4 climbs, meaning that you’ll be climbing rather than hiking, usually without a rope, although it doesn’t hurt to have one. A fall from a Class 4 climb could be lethal.

If you’re just starting your 14ers journey, it’s probably best to avoid these more difficult peaks and stick to mountains with a Class 1 or Class 2 rating at first. And as with all mountain climbing no matter the difficulty or class, be aware of a few dangers you may face — and know how to mitigate those dangers when you can. Starting very early in the morning is almost always a smart move, as afternoon thunderstorms are common at elevation. These storms carry the danger of lightning strikes, especially when above the timberline. If you find yourself in an exposed area while a storm rolls in, descend quickly and keep any metal gear away from your body.

Altitude sickness is another common danger climbers should be aware of when scaling these post-14,000-feet giants. This happens when you make your way to a higher elevation too quickly, and your body doesn’t adjust to changes in barometric or atmospheric pressure. At higher altitudes, pressure drops and less oxygen is available. The risk of altitude sickness generally begins at 8,000 feet. Mild symptoms of altitude sickness can feel like a hangover — dizziness, headache, muscles aches and nausea. But more severe forms of the illness can be life-threatening, causing fluid to build up in the lungs or brain.

Always make sure you have the proper gear and equipment, and don’t get too ambitious; to climb any 14er is a feat. You don’t have to start off with the most difficult mountain. Take it slow and enjoy the view.