Wayne and Linda Lee had searched for a home for more than a year, but when they discovered a 1950s home for sale near Chautauqua Park in Boulder the connection was instant.

“It felt like a happy house,” Linda says. “The home’s modernist design brought back all the things we loved from the fifties and sixties.”

Wayne, a retired architect, and Linda, an artist, had already renovated four homes together during their 46 years of marriage. This time around, they were inspired by the home’s good bones and classic design. Built in 1950, the residence was a generous wedding present given to the original homeowners, who lived there until the Lees purchased it in 2008. Aside from an addition in 1962 that included a rec room and master bedroom, the mid-20th-century modern home’s interiors had been virtually untouched.

“We don’t believe bigger means better, so the home was the perfect scale for the two of us,” says Linda. “We’re also both in our seventies, and we thought the home’s single-level design would work well for us in the future.” The 3,100-square-foot floor plan was choppy, however, and the rooms were small—especially the kitchen. With three grandchildren who visit often, the Lees envisioned creating an open living space that would be better suited to entertaining.

Working with architect DiAnn Sherk of Boulder Associates, the couple shared their ideas and discussed possibilities. “Preserving the authenticity of the fifties is what we were going for,” Wayne says. “We wanted to respect the house as it was, while at the same time renovate it and bring it up to date.”

Sherk and builder Cam Moore worked in tandem to bring the Lees’ dreams to fruition. Several walls were removed to open up the space, and many modifications made to bring the home up to code—including a new electrical system. “We knew we needed to rewire the whole house, but the vaulted ceilings made access impossible,” Wayne says. “However, Linda and I always try to see problems as opportunities.” And since the home also needed a new roof, the couple decided to remove the top of the house, rewire everything, and add new insulation in the ceiling and walls. While everything was opened up, they added two skylights to bring in natural light. 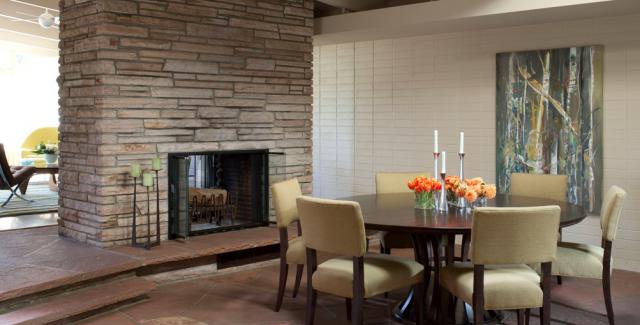 The layout now includes an ample living area, three bedrooms, three bathrooms, studio space for Linda and an office for Wayne. New dark-stained walnut flooring throughout the kitchen, living room and family room brings a sense of cohesiveness to the once-divided space. Drafty windows were replaced with new double-paned models, and energy-efficient ceiling fans were installed overhead. “The home’s design naturally promotes good air flow, so we only had to run the air conditioning a few times this summer,” Wayne says.

For the home’s interiors, the couple chose a palette of browns, blues and greens, and scouted period-appropriate materials and furnishings. “We think there’s beauty in consistency and simplicity,” Wayne says. “It’s been gratifying to live with furnishings by iconic designers like Ludwig Mies van der Rohe, Charles Eames and Eero Saarinen. This home gave us an opportunity to reach back to happy times and the classic design and furnishings we’ve both always respected and enjoyed.”­­

TIME-TESTED REMODELING SECRETS
After completing five successful home renovations over nearly a half-century of marriage, Wayne and Linda Lee share their hard-won wisdom for getting the most out of the process:

Wait. “Be patient until you find the place that feels like home,” Linda says. “Trust your
intuition and pay attention to your first impression. Look carefully at the overall structure and space. If the home has good energy, you can probably make it work.”

Envision. “Go into the space and first think of it as it currently exists, and then consider how it might look when you would occupy it,” says Wayne. “Project yourself into the home and see if your lifestyle could work within the space.”

Dream. “Renovating a home is a time to express your dreams,” says Wayne. “You don’t want to ask, ‘What if I’d…?’ later. Find a creative contractor who’s a ‘yes’ person, not a ‘no’ person—someone who will think with you and help you realize your dreams.”

Visualize. “Cut pictures from magazines or take photos of other spaces you like so you can communicate concisely what you want with your architect or contractor,” says Linda.

Budget. “Set a realistic budget, and then set aside some contingency money,” Wayne says. “You’ll never remodel an older property for less than your budget.”

Bend. “You never know what you’re going to find when you tear into an old property,”
says Wayne. “We try to see problems as unexpected opportunities. That attitude makes renovation a much easier process.”