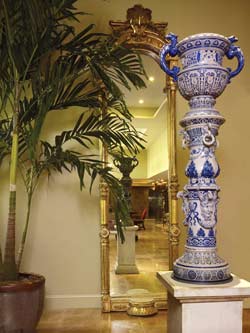 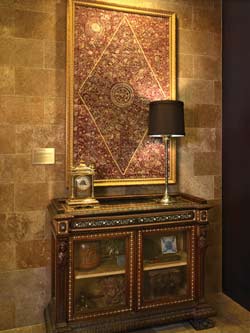 Crafted in the 19th century, this Italian ivory-inlaid cabinet, carved of walnut, was directly imported from Rome. The extraordinary detail makes this piece one of the Landmark’s most celebrated antiques.

The Landmark in Greenwood Village, a mixed-use development of residences and retail spaces, has no shortage of luxury amenities: a main-level pool with private cabanas and food and beverage service; a roof-top spa and garden with views of the mountains; a concierge who tracks down hard-to-find tickets and makes last-minute dinner reservations—the list rivals the amenities you’d find at most boutique hotels. But developer Zack Davidson has invested in one amenity that he hopes will distinguish his project from its peers: a $1 million art and antiques collection in the development’s public spaces.

The collection reflects Davidson’s love for all things classical, an affinity that informs the Landmark’s Old World aesthetic. “If you understand great design that’s grounded in classical European tradition, you can create places with a sense of permanence and meaning,” he explains. One of the risks of recreating an Old World aura in Colorado is ending up with another “Denver-does-Euro-Disney” development—a feat all too often achieved, says Eric Mandil, designer/architect on the project and founder of Mandil, Inc. To avoid such an outcome, Davidson’s creative team took a European field trip to soak up the architecture, public and private spaces, and elusive details of authentic old Europe.

Armed with ideas and inspiration, the team—design architect Don Ruggles, Mandil and others—created a development that honors classic European style. Formal cobblestone courtyards are reminiscent of the inviting public gardens in Spain and Italy. Grand English Georgian details define the interiors of a series of single-level condos planned for the development. And art and antiques enhance all of the Landmark’s spaces.

Tower One, the only completed residence, is a study in the juxtaposition of earthy architectural antiques and fine, formal pieces, many of them Rococo, Baroque and Neoclassical. The coolly spare interior details of the public spaces feel modern, while smartly chosen and thoughtfully placed antiques add a sense of opulence to the environment. The result is serene and elegant. “If you see something pretty every day it enriches your life,” says Mandil.

Exit the elevator on any of Tower One’s 13 floors and take in a large museum-like niche displaying grouped antique objects, each floor with its own theme. In such a setting, common items such as antique locks and tile mosaics rise to the level of fine art. These displays are as much about style and visual interest as intrinsic value—something that jives with Mandil’s general philosophy: “Art should speak to everyone. It is universal,” he says, adding that he enjoys injecting sly elements of whimsy into the elegant interiors. “We were going for a little funkiness, too.”

The items adorning Tower One’s lobby include 12-foot Beaux-Artes mahogany doors from France, hand-carved Neoclassical pillars, a massive Gothic Revival stone fireplace from the Côte d’Or and monumental chandeliers—ample evidence that Davidson had no interest in creating yet another generic, corporate-art-filled environment. “What I don’t want to do,” he says, “is reinvent time-tested classics. I don’t do trendy.”

It seems he doesn’t need to. Tower One’s 130 residences were mostly sold when the construction was completed this summer. A second tower of condominium residences (called Meridian), slated for completion in spring of 2009, is 80-percent sold. The project has attracted a diverse group of high-end retailers, including numerous restaurants and home furnishing shops, a spa and a state-of-the-art movie theater. Davidson’s future plans call for seven Manor Homes, which will house single-level condos, and 60 Brownstone residences.

Realtor Rike Palese, who markets the project with partner Katie Everett—both of Re/Max Classic New Home Sales—chalks up the Landmark’s early success to the development and design teams’ core philosophy: offer luxurious living to active, wealthy baby-boomers. The antique-bejeweled spaces have an elegant and timeless style, key to distinguishing the residences. “Zach has raised the bar here.” says Palese. “It’s an easy sell.”

Denver, says Davidson, is “an amazingly cosmopolitan city of artfully, stylistically sophisticated people looking for authenticity.” But why invest so much in the Landmark’s art collection when, as he admits, the market is “generally accepting of developers not offering something significantly special”? Sure, having an uncommon sales hook is an undeniable marketing tactic. But Davidson says the art serves a great purpose: “Living with art gives depth to your soul.”  Visitthelandmark.com.