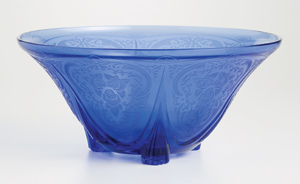 Lovely cerulean Bleu Céleste; bright, coppery Lapis; pale, purplish Clair de Lune: whatever its guise of the moment, the color blue has frequently starred at history’s table. In ceramics the iconic combination of blue and white has ancient roots–originating during China’s Yuan and Míng dynasties (13th-17th centuries). Traditional Oriental themes were introduced to 17th- and 18th-century Europe by the Dutch East India Company and Portuguese traders, which caused nothing short of a craze for these objects. Europe’s fascination with the Orient reached a fevered pitch in the middle-to-late-18th century, sparking the desire for chinoiserie–a Western interpretation of Oriental motifs–in fashion, textile and furniture design. Eventually the Chinese began exporting porcelain decorated specifically for the Western market in a hybrid of Eastern and Western tastes.

When England’s Staffordshire potters invented and perfected a new process of transfer printing (printed decoration applied directly to ceramic in blue underglaze), the world of “affordable” tableware exploded. The look of hand-painted Chinese porcelains became available without the extravagant cost. Called transferware today, the earliest examples were executed in a blue monochromatic scheme.

By far the most popular pattern ever produced, is the “Willow”or “Blue Willow” pattern. Spode declares that its founder, Josiah Spode, first created the pattern in 1790. Others suggest that Thomas Minton designed it for the Coalport Pottery Company in 1770. Regardless of its origin, nearly every English pottery company offered a variation. Today, this pattern has been copied more than any other.

Beyond the Dish
Your sapphire-themed table need not be confined to china. The translucent beauty of blue glass hails from every imaginable place and time in the historical continuum. Whether pouring water from a pitcher hand blown by England’s famous Bristol Blue Glass Company (which has made glass tableware continuously since the Napoleonic era) or drinking from fanciful wine stems of the world-class glassmakers of the Venetian island of Murano, the possibilities are endless. While 17th-century Americans primarily used functional, uncolored glass tableware (most of it imported from England) American glass manufacture exploded in the 19th Century as the Victorians demanded a more colorful, decorative table. Companies like the Boston & Sandwich Glass Company, American and Flint Glassworks and the New England Glass Company developed ways to mass produce mold-blown and pressed-glass pitchers, plates, tumblers and serving dishes in a range of colors. Blue was always in high demand. In the early 20th century, Louis Comfort Tiffany brought his version of colored Venetian wine stems to the American table. Prior to Tiffany, wine in America was commonly drunk from uncolored glass. By the 1940s the brightly colored “Depression Glass,” which many of us have inherited from a parent or grandparent, was mainstream.

Everything Old is New Again
Collecting antique or reproduction blue tableware can be an incredibly diverse endeavor as your energy and pocketbook allow. Historically important blue ceramics coveted by collectors, such as the opulent 18th- and 19th-century French Sèvres Bleu Céleste and Bleu Lapis porcelains have inspired countless copies. At the opposite end of the spectrum are 19th-century-American salt-glazed stoneware crocks that feature hand-painted, stylized floral decoration in cobalt blue.

For investment-quality pieces look to Denver’s Starr Antiques, (303) 399-4537, starrantiques.com, which is a wonderful resource for these as well as a variety of other blue-themed American and English wares, including Bristol glassware, North Carolina blue spatter-glaze pottery and Chinese export porcelains. Look to Denver’s Glass Roots Antiques, (303) 778-8693, and La Cache, (303) 871-9605, (an upscale consignment shop that benefits Children’s Hospital), for a good selection of the late-19th- and early-20th-century’s heavy hitters of American glass, including Victorian-era glass, Depression glass, Fostoria and others.

The final word on collecting antique glass and china of specific patterns or types is replacements.com–an enormous warehouse of individually sold pieces from nearly every time and place on earth. Variables such as period, material and maker aside, old and rare porcelain and glass can be costly to collect.

If you love the look, but lack the resources to acquire an antique piece, look to reproductions. Today, blue-and-white dinner services are as popular as ever, as evidenced by Spode’s recent reintroduction of their historic “Willow,” “Blue Italian” and “Tower Blue,” patterns. Several reproduction porcelains are manufactured today by the companies that originated them, including Russian tea sets by the Imperial Porcelain Factory (formerly Lomonosov) and Meissen’s famous “Blue Onion” pattern china.

Whether you enjoy antiques or reproductions, you will find it is easy to take your party or tablescape “over the top” with a mélange of smartly-chosen pieces in the blue theme.

This article appears in the November-December 2007 issue of Colorado Homes and Lifestyles.
Categories: Art, Entertaining