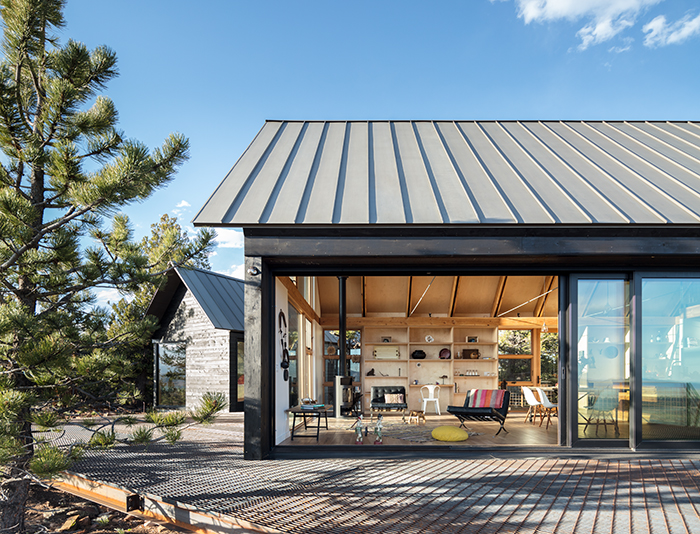 Architect Renée del Gaudio grew up in what she refers to as the “homogeneity” of suburban Detroit. “I didn’t know what was missing until I experienced the opposite,” she says of her undergraduate experience at the University of Michigan. “In Ann Arbor I felt a sense of place for the first time in my life and realized it was the architecture that played a strong role in creating that feeling,” she says. During the ensuing school years, opportunities to work on design/build projects in countries like Cuba and Kenya further sharpened del Gaudio’s focus. “I got to see simple architecture that could not have been anywhere else and that affected my thoughts about the importance of fully integrating buildings with their surroundings,” she explains. “A house has to feel like it belongs.”

Years later, with del Gaudio as head of her own firm in Boulder, it is not surprising that issues related to the local vernacular, a connection to the landscape and environmental impact dominate the conversation about a vacation getaway she designed, situated at 10,000 feet on a rocky perch outside of Fairplay. Here, two buildings—dubbed Big Cabin, Little Cabin—are built atop isolated pier foundations to minimize impact on the land, and the simple metal, glass and cedar siding (the latter stained black to blend the dwellings with the forest) slip effortlessly into the stunning but austere landscape. Matching gable roofs further cement the architecture to its surroundings. “If you drive south on Highway 9, you’ll see a similar slope of roof on many of the old buildings,” del Gaudio says. “I used that straightforward agricultural idea but in a modern way.”

The idea for two buildings came from the homeowner, Colombian artist Maricel Blum, who wanted her two grown children to have a sense of independence when they gathered for family getaways. By her own account, Blum started coming to Colorado to ski more than 30 years ago and, all those decades later, yearned for a place of her own.

A search for the perfect lot led to Redhill Forest, and amidst the ponderosa and bristlecone pines, she knew she was home. “Bristlecone pine trees are some of the oldest entities in the world; these trees emit a magical aura, which creates a feeling of awe you can’t describe,” Blum says. “I love that we are far away but also in the middle of everything. It’s just a short drive to Breckenridge in winter and Buena Vista for rafting in summer.”

With panoramic vistas of the Sangre de Cristo Mountains and the Collegiate Peaks on the horizon, large expanses of glass were the natural choice to provide the connection to nature. “I wanted everything open and nothing obstructing the views,” says Blum, who insisted on glass walls down to the floor in the shower so she could feel like she was part of the natural surroundings. “If I could shower outside I would, but this is the next best thing.”

Inside, plywood walls and ceilings imbue the 1,200-square-foot and 400-square-foot domiciles with a minimalist ambience. The tight, open floor plan mandates efficiency: A built-in desk and bookcase serve as a home office in the living room, while the bathtub shares space with the shower in the master bathroom. “There was no need for a separate office, and wherever I could, I eliminated redundancy,” says del Gaudio, whose modern interpretation of a classic American cabin is all about bringing people together. “There is a simplicity in form and function that encourages the family to enjoy nature and each other. And there’s no lack of identity. It belongs here.” 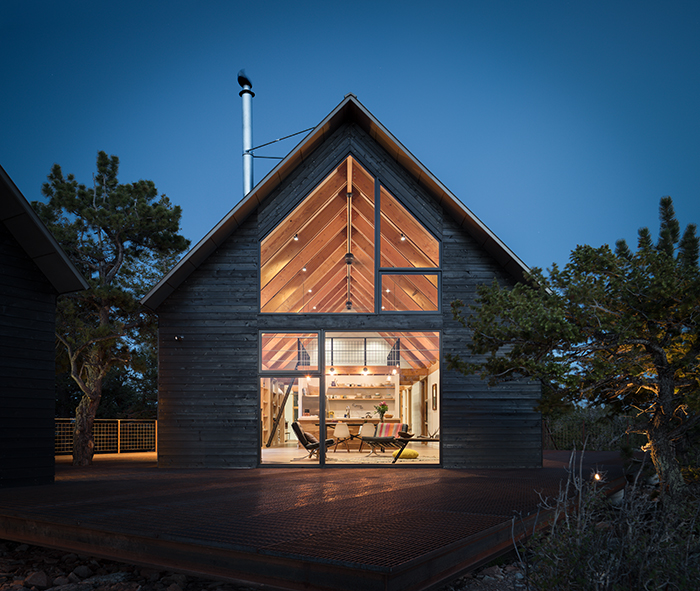 An illuminated view from the outside in.

“There is a simplicity in form and function that encourages the family to enjoy nature and each other.” —Renée del Gaudio 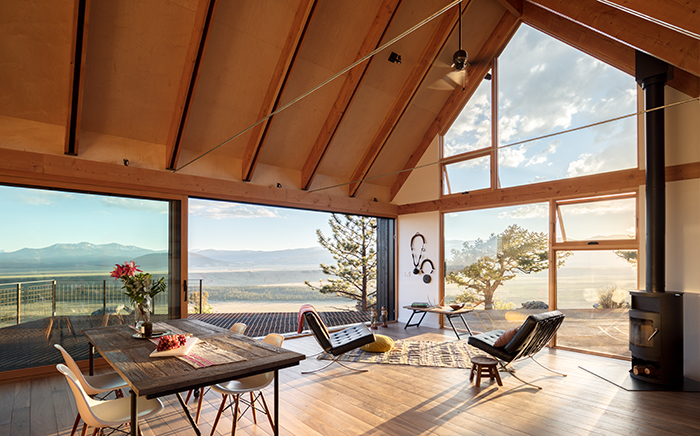 A world traveler, the homeowner included items from around the globe, like the handcrafted water carriers on the floor, wall hangings once used for rice harvesting and a wood bench—all from Burma. The hand-carved stool is from India. Closed- and open-cell foam insulation and triple-pane windows with low-e glass keep indoor temperatures cooler in th summer.

“I wanted everything open and nothing obstructing the views.” — Maricel Blum 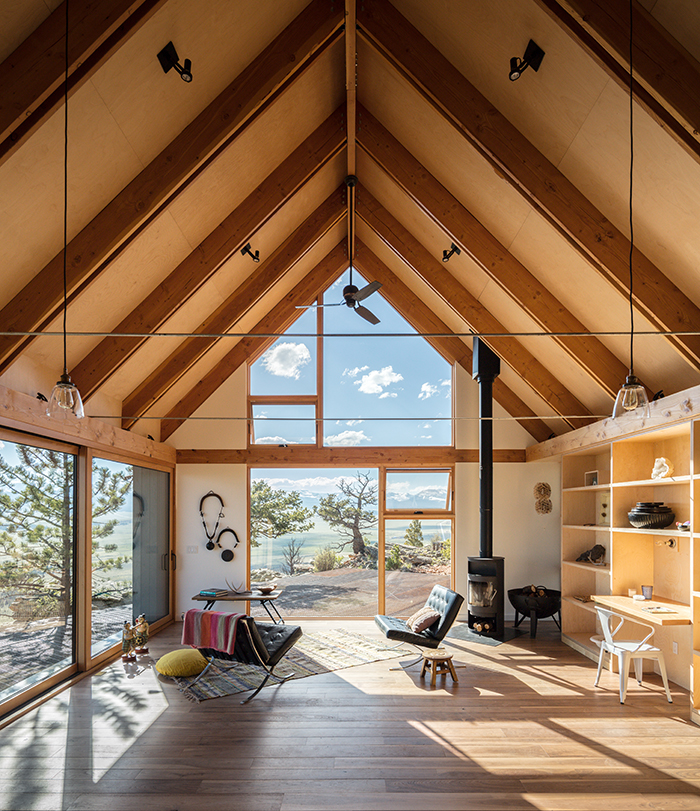 Classic Barcelona chairs and a rug from India complement the simple interior architecture. The desk chair is from Tolix, and the homeowner converted an old Mexican iron cooking pot into a holder for firewood. 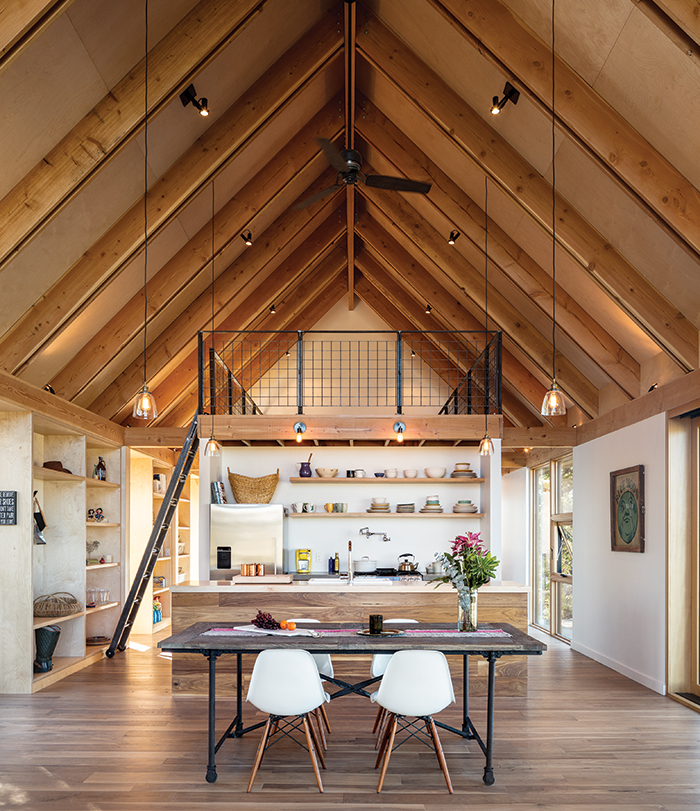 WAC Lighting in the ceiling warms the dining room, where molded plastic Eames chairs with dowel legs surround an RH table. The loft area above the kitchen houses a painting studio. 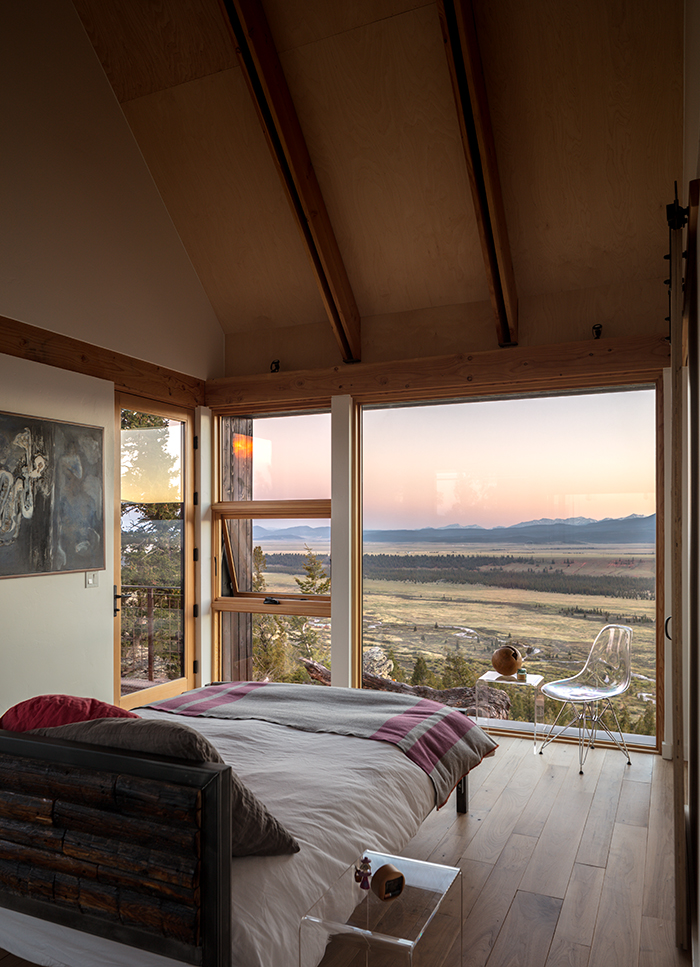 The same simple materials seen elsewhere extend to the master bedroom. A plywood ceiling and walnut floors provide warmth and continuity, and windows by Loewen keep the focus on nature. 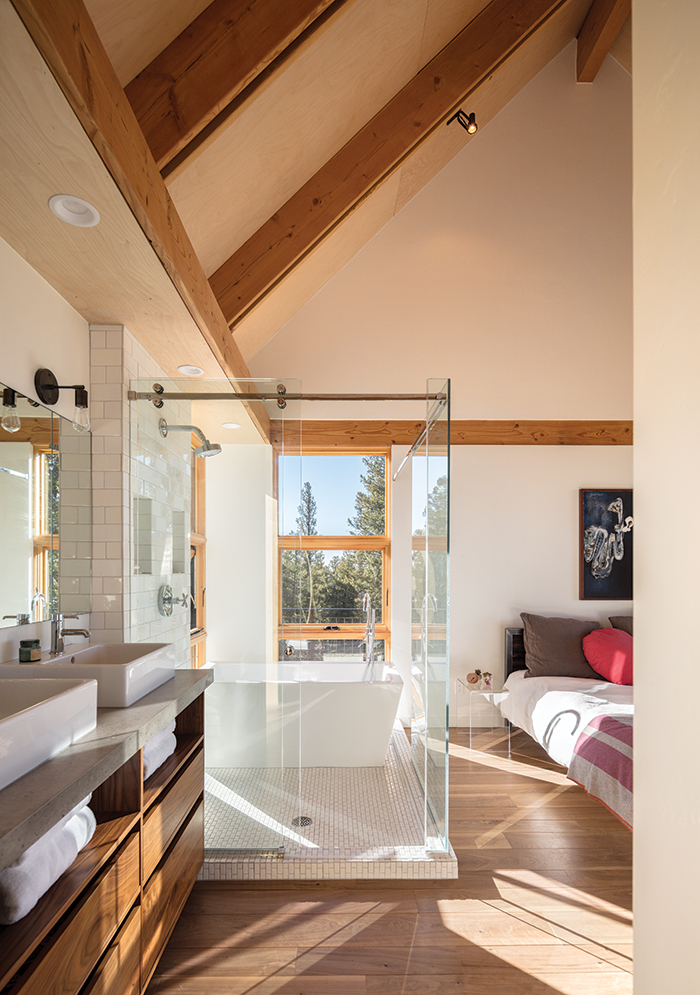 “The floor next to the tub always gets wet, so why not just put it in the shower,” reasons del Gaudio, who did just that with a Signature Hardware tub and tub filler. IKEA sinks top the custom walnut vanities by Chris Nicholson of Natural Interiors, and the subway shower tile is from Daltile.