Beyond the Beaten Path

We’ve all seen the log castles, sprawling ski chalets and soaring modern structures that dot the landscape of Colorado’s resort towns. Here’s a different take on what defines luxury in Colorado. Look to these four gems for smart design, a sensitivity to the earth and an appealing aesthetic that reflects their residents’ interests and values. Who knows? You might just find yourself a new—and unusual—place to call home.

We’ve all seen the log castles, sprawling ski chalets and soaring modern structures that dot the landscape of Colorado’s resort towns. Here’s a different take on what defines luxury in Colorado. Look to these four gems for smart design, a sensitivity to the earth and an appealing aesthetic that reflects their residents’ interests and values. Who knows? You might just find yourself a new—and unusual—place to call home. 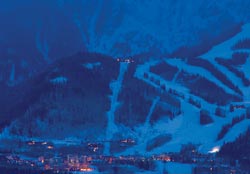 The glowing patch of lights up on the mountain (overlooking Telluride Mountain Village below) come from The Ridge—a ski-in, ski-out community in which you won’t find any cars. Residents check their bags with the bellman at the base and cruise home on the gondola. 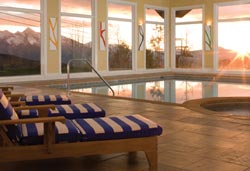 A few poolside lounge chairs sit in view of striking mountain panoramas. This one is home to The Ridge Club, the Telluride development’s luxurious headquarters that prove mountain life doesn’t have to be rustic.

How, then, do owners get themselves and their luggage up the side of the mountain? The gondola, of course. But they don’t have to carry any luggage if they don’t want to. When residents reach the station in the heart of Mountain Village, friendly bellmen greet families and offer to lighten their loads. Shortly thereafter, those belongings await owners in their dwellings.

The community was designed according to the historic and oft-forgotten model of community development: build where transportation already exists. In this case, there were no roads, only a gondola—so the area surrounding the San Sophia Station at the top of the gondola line above Mountain Village became the perfect place for a community without wheels. And though you won’t find any cars on the mountain, some owners have access to a different way to get around. Once off the “big elevator,” residents who have purchased single-family home sites can cruise home in neighborhood electric vehicles (NEVs), which look like a cross between a Smart Car and a golf cart.

The Ridge offers three varieties of ski-in, ski-out living: single-family homes, cabins and attached condominiums. Of the 20 single-family home sites in the plans, 11 have been sold, with one home built and the foundation for a second in place. Sites range in price from $1.8 to 2.4 million and will accommodate homes ranging from 5,000 to 9,000 square feet.

If prospective buyers aren’t up to the task of building a custom home, then the development’s 15 cabins, each ranging in size from 3,200 to 4,400 square feet and priced around $3.6 million, are good alternatives. So are the 3,100-square-foot attached condominiums that are in the works (not yet priced).

All owners also have access to the sophisticated-but-comfortable Ridge Club, already completed and poised to offer guests perks such as an outdoor heated Jacuzzi, media room and sunset deck with a fire pit.

Before the economic downturn, Horn projected the development would be fully sold within five years. Today, although he thinks it might take a bit longer, he has no less faith in the property’s appeal. “You get the convenience of living in the town of Telluride or the Mountain Village core, but you get the expansiveness, the lack of clutter and the phenomenal vistas that you can only find at The Ridge. Where else are you guaranteed fresh tracks on a powder morning?”

Why it stands out: There’s something peaceful about a community that exists free of cars—especially when that community also gives you access to the vast and inspiring scenery of untainted ski country. John Horn, (970) 728-6661, theridgeattelluride.com.

This spring, 13 townhomes sprang up off of 25th and Champa Street in Denver’s Curtis Park neighborhood, all in record time. These aren’t any old townhomes, though. They are “Systems-Built”: prefabricated structures that are built off-site in a climate-controlled environment and then finished on-site in about six months, all by a Colorado-based company called All American Homes.

Why build these homes off-site? The benefits are many. Weather-related delays are eliminated and materials are protected from the elements; the fit is tighter, making for better insulation and heating efficiency; and all scraps are recycled. “The process naturally involves the reduction of material use, so there’s very little waste and much better quality control,” says Kentwood City Properties’ Andrew Gonzales, a listing agent on the project along with Bill Verdon.

Each of the 13 dwellings offers 1,250 square feet of living space with two bedrooms and two-and-a-half baths—all dressed in a palette of sleek finishes. Buyers can opt for an upgrade package that includes a kitchen tile backsplash and an eco-friendly vent-less fireplace, with some units primed for a build-out of the main floor into an additional bedroom, den or office space. Each unit has a two or three-car attached garage and a balcony, and some have rooftop decks.

The first seven units facing Champa became available in March, while the other six units came on the market just weeks ago. All are priced between $347,000 and $367,000. At press time, one unit had been reserved, with 12 available for the taking. “There is nothing in the city for townhome living in this price point, especially in Curtis Park,” Gonzales says.

Why it stands out: Modular homes are the next wave in modern living, and in a day and age when efficiency and minimalism are becoming design mainstays, we admire this tight operation—from the precision of the construction process to each home’s small footprint. Andrew Gonzales, (303) 489-1197, and Bill Verdon (303) 489-5217, http://www1.kentwoodrealestate.com/ag/traverse/home.html. 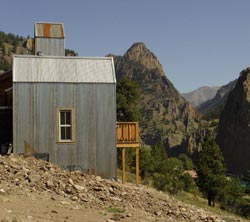 The architecture of Creede America blends old with new. Composed of a palette of materials that you might find in the Old West, these structures bear the charm of years passed while putting forth a fresh, and slightly modern, look.Creede America, Creede

“It’s not on the way to anywhere,” Keith Loftin says about the community of Creede—a quirky old mining town about four-and-a-half hours south of Denver. Then why plan a 70-home community there?

For Loftin, University of Colorado-Denver professor of architecture, and one of his former students, Avery Augur, the project was about preserving the character of a town unlike any other. Augur grew up visiting Creede with his family, so when a critical 46-acre parcel of land on the western mesa overlooking the town came on the market, he stepped in as a buyer. He was only 29 at the time.

Loftin, architect during the project’s genesis and present-day investor, describes his and Augur’s shared vision. “We didn’t want the character of Creede to be destroyed,” he says. “It is a really funky place. It’s got its own character, its own sort of western idiosyncrasies, and we just absolutely didn’t want that to be destroyed.”

Today, Creede America is taking shape—as a community of single-family homes that are big on personality and small on square footage. Six homes have already been constructed, each one-of-a-kind and built from a palette of materials that look true to the Old West. Some mimic weathered western homes with the look of multiple additions; others take on a more modern slant. All stand together beautifully as an extension of the town. (In fact, they are. Creede America was annexed into the town of Creede in 2006—the only annexation in the town’s history.) “When you look at the houses, you know that they’re new, but they’re not so completely detached from history,” Augur says.

Take the homes’ use of new technology. Each is heated using a geothermal system, which takes 15 to 20 years to recoup its cost. “We felt it was important to do something like that,” Loftin says. “We didn’t think that people who were buying here would be coming for the short term.” Design choices like this are well suited for a place like Creede. It’s not, nor has it ever been, a tourism-driven destination. Instead, it’s a community rich in history and grounded with deeply embedded roots.

As demand grows, the residents will see neighboring dwellings crop up and fill out the community. Homes will not exceed 3,500 square feet and will range in price from $350,000 to $800,000. Augur and his present-day team of architects—Mark Dubois of Olhausen Dubois in New York and Jaimi Baer in California—will work with the new owners to accommodate their wishes while making sure the architecture is in keeping with the style of Creede. A park in the middle of the development already exists along with trails that lead to town, and the plans accommodate a hotel in the future.

In the end, the project stats speak for themselves. Of the six homes that have been built, five are sold and the sixth is under contract. “The strength of our project lies in the fact that we’re not building big houses,” Augur says. “Our homes are measured by the quality of the square footage, not the quantity.”

Why it stands out: You can own a slice of “one of the last places of the true West,” as Loftin puts it, and you won’t spend nearly as much as you would in some of Colorado’s mainstream resort destinations. Plus, few places that nobody has ever heard of have architecture as great as this. Avery Augur, (719) 658-0223, creedeamerica.com.

Developer Paul Stashick of Equilibrium Resorts knew a good opportunity when he saw it. On one of the last available pristine tracts of land in the heart of Summit County, he set aside eight homesteads, each 35 stunning acres, and created Daley Ranch.

“It’s a very special piece of property, and it’s adjacent to the main resort corridor in Summit County,” says C.J. Julin, vice president of marketing for Equilibrium Resorts. “We knew the right thing to do was to keep it in its pristine state and allow eight families to have that opportunity and access to the resorts.”

Julin calls it a luxury working ranch, which means that owners can participate in as much of the horse and hay-ranching operation (which takes place on 70-plus acres of high-quality hay fields) as they desire, while opting out of the dirty work. There’s also an extensive network of trails for snowshoeing, biking and hiking, along with a ranch-owned snowcat, a private stream for fly fishing, and the Homestead Horse Barn—which doubles as ranch headquarters and a gathering place for homeowners to throw a ranch-style hoe-down or simply kick back.

“When you’re on the ranch, it feels like you’re miles away, but when you want to pick up some milk, you’re five minutes away ,” Julin says.

Though all eight lots, which start at $2.2 million, are still on the market, Julin says that the company has had a lot of interest. “People can’t believe that this place still exists in the middle of Summit County, but they are in a ‘wait and see’ mode. People are being patient buyers,” he says. If Daley Ranch sounds like your idea of paradise, take Julin’s words to heart: “There won’t be another thing like this in Summit County.”

Why it stands out: Only eight families get to buy in, which makes for an exclusive ranch experience. Plus, it’s practically a stone’s throw from the treasure trove of outdoor recreation in the main corridor of Summit County. C.J. Julin, (970) 471-3092, eqresorts.com.