Before & After: A Midcentury Boulder Ranch

Built in 1978, this single-story house in a desirable North Boulder neighborhood felt like a cliché of its time—dark-brown diagonal cedar siding, lots of moss rock inside and out. Its warren of small rooms obscured beautiful views of semirural surroundings just a mile north of the city’s thriving center, and the front door opened perplexingly to a stairway that descended to the basement, offering no hint of the main living spaces beyond.

Architect Harvey Hine, AIA, stripped down and simplified the home, by moving the basement stairs toward the back of the house and repositioning the entrance to transform an awkwardly placed laundry room into a spacious foyer. He then opened up the floor plan by removing the walls of several once-boxy rooms. While keeping existing windows, he added several more to create bright, spacious interiors made lighter with neutral-toned surfaces and natural-finished, wide-plank birch floors throughout. From a new kitchen with a spacious hidden pantry to a master wing complete with a private library, office, walk-in closet, and luxurious yet spare bath, the home now perfectly complements its owners’ contemporary artworks and midcentury modern furnishings.

“I’d been dreaming of quieter, simpler, more peaceful surroundings,” says the homeowner of this North Boulder house. She and her husband shared a vision of an empty-nest sanctuary in Boulder—including a single-story floor plan that would function efficiently into their well-in-the-future retirement—that felt like a world away from their family home in the busy Denver commuter suburb of Arvada.

The couple had often joked about having a home in Arvada but living in Boulder. So Boulder are these two that they met in the checkout line at Whole Foods. “She was standing in front of me in scrubs with a chopstick in her hair,” says the husband. Lunch followed, then a life together that included several Boulder visits a week to shop, dine out, or hike. The couple loved spending their down time exploring Boulder’s coffee shops and prolific trail system.

So, in March 2011, when they found a 3,300-square-foot single-story residence (plus finished basement) on a woodsy half-acre that was an easy bike ride from downtown and just half a block south of the popular Goat Trail leading into the foothills, they felt they were onto something.

The only drawback was that the house, built about 40 years ago, seemed a less-than-sunny cliché of its era, from its diagonal dark-brown cedar siding and Rocky Mountain–rustic moss rock to its warren of tiny, dark rooms.

“It probably had the worst floor plan I’d ever seen,” says Harvey Hine, AIA, principal of HMH Architecture + Interiors in Boulder, whom the couple chose to help transform their home. They met with several architects but Hine’s take struck a chord: “Harvey walked in and immediately came up with some brilliant ideas to make it the house we wanted.”

Chief among Hine’s restructuring was a repositioning of the basement stairway that had once depressingly greeted visitors the moment they entered. Hine also moved the front door so that it would open into a spacious new skylit foyer where an inconvenient laundry room had formerly been.

The remainder of Hine’s changes consisted primarily of eliminating some interior walls for a more spacious plan as well as a logical traffic flow. Doing so helped make the new kitchen and existing dining and living rooms feel connected to each other while remaining discrete. The more logical, simple configuration also allowed for the creation of a private-feeling master wing complete with a home office and a library.

Another key accomplishment involved updating and simplifying the finishes and fittings, a process spearheaded by HMH interior designer Kate Dixon, ASID, IIDA. “She helped us find a palette that was pleasing, clean, and modern,” offers the wife, noting how well new surfaces such as light birch floors, medium-hued birch and maple cabinetry, soft white walls, and subtle tile work complement the sleek midcentury modern furniture pieces the couple have collected. Outside, a gray standing-seam steel roof “unites the house in a clean, modern way,” observes Hine.

The homeowners relish their Boulder transition and now enjoy a more active yet serene life. They hike and bike regularly, and their children often visit for family meals, monthly game nights, and occasional sleepovers.

The couple have also transformed a spare bedroom with beautiful early morning light into a meditation room/shrine for their Buddhist practice. “We live a healthier lifestyle here,” says the wife. “And the house supports my desire for quiet, simple, peaceful surroundings.” Adds the husband, “With Harvey’s help, we definitely realized what we knew was the potential when we first saw this house.” 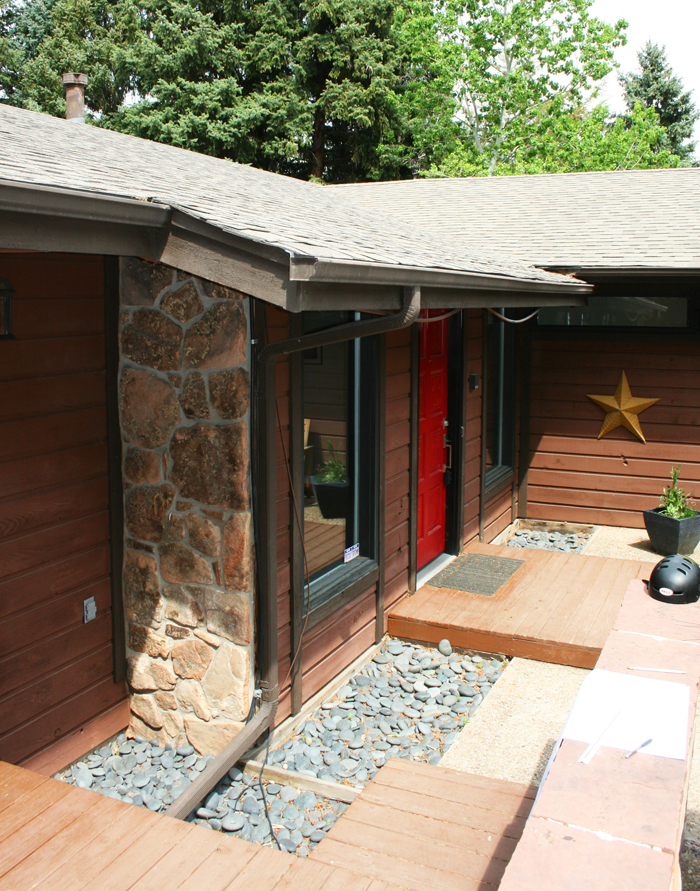 Terracotta pavers once led to the former entrance, which was moved to the far end of the terrace and now features a custom alder door. 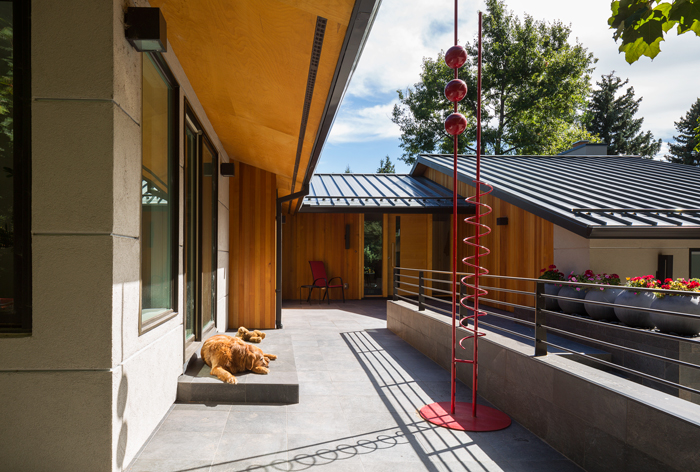 On a front terrace repaved in Walks 1.0 porcelain tile from Floor Gres of Italy, one of the owners’ two golden retrievers takes in the sun. 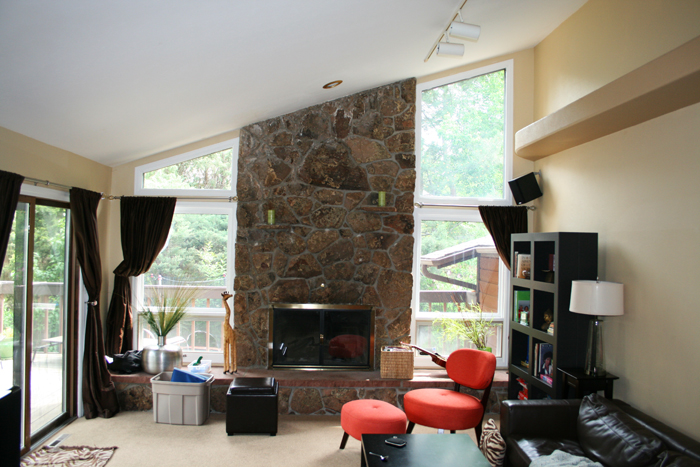 The living room previously felt unfocused and cluttered with a hodgepodge of furniture and dark draperies. 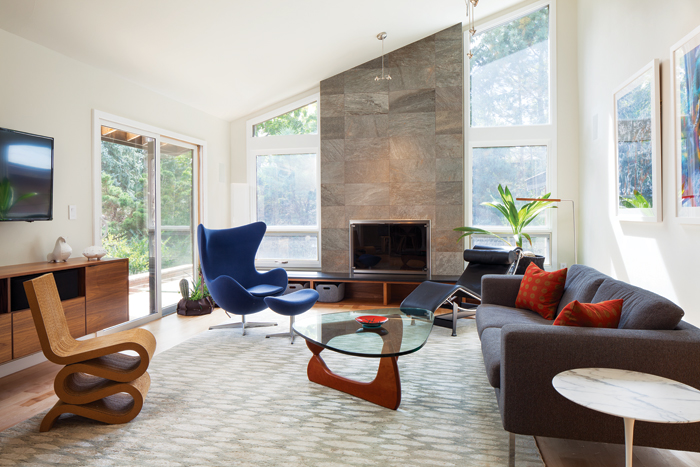 Sleeker stone surfacing for the fireplace and a lighter wall color provide a perfect backdrop for midcentury modern furnishings including, from left, a Frank Gehry Wiggle chair from Vitra, a Blue Egg Chair and ottoman by Arne Jacobsen, an LC4 lounge by Le Corbusier, a Neo couch, and Saarinen side tables. 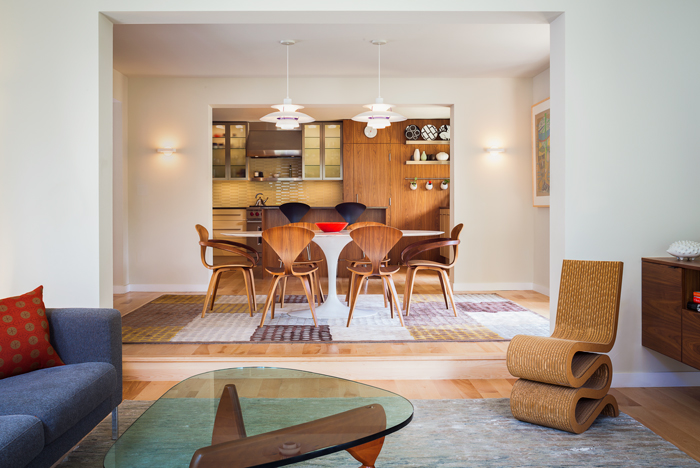 Between the kitchen and living room, the dining room highlights an Eero Saarinen Oval Dining Table from Knoll and Cherner molded walnut chairs. 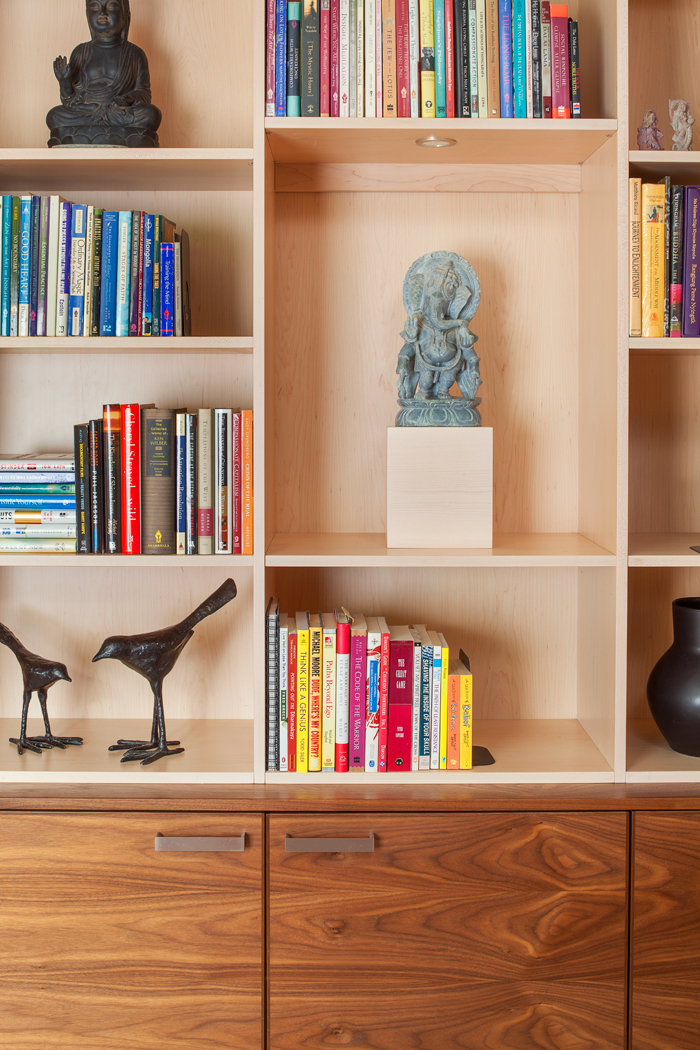 Library built-ins include Buddha and Ganesh statues from the couple’s Eastern travels. 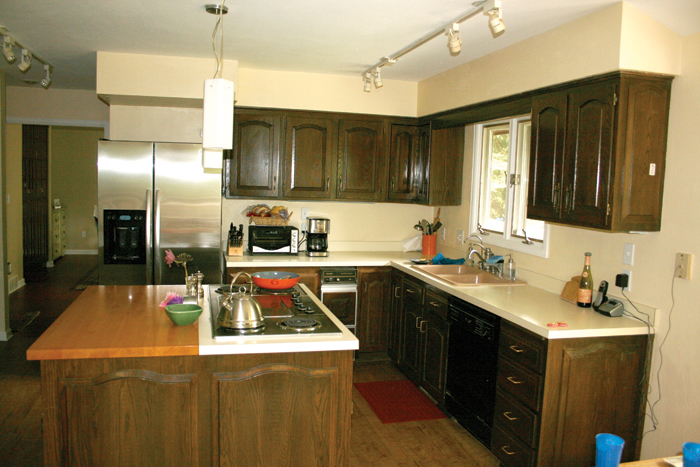 The old kitchen was not only outmoded but also lacked storage and workspace. 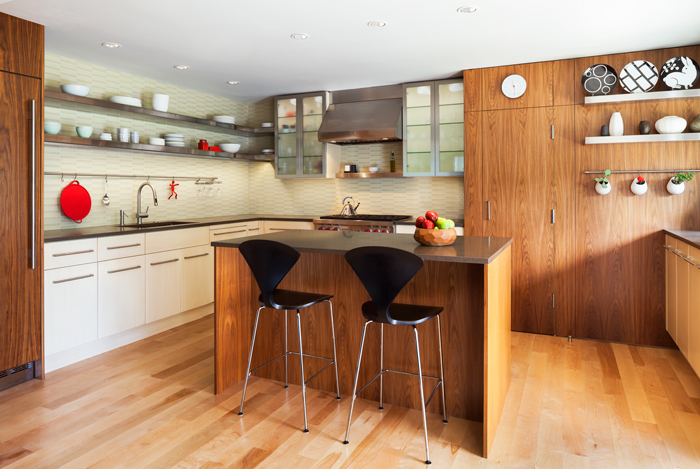 Now expanded, the cooking space includes an island uncluttered by sink or cooktop, and a walk-in pantry with freezer, all hidden behind a door to the right of the stove. 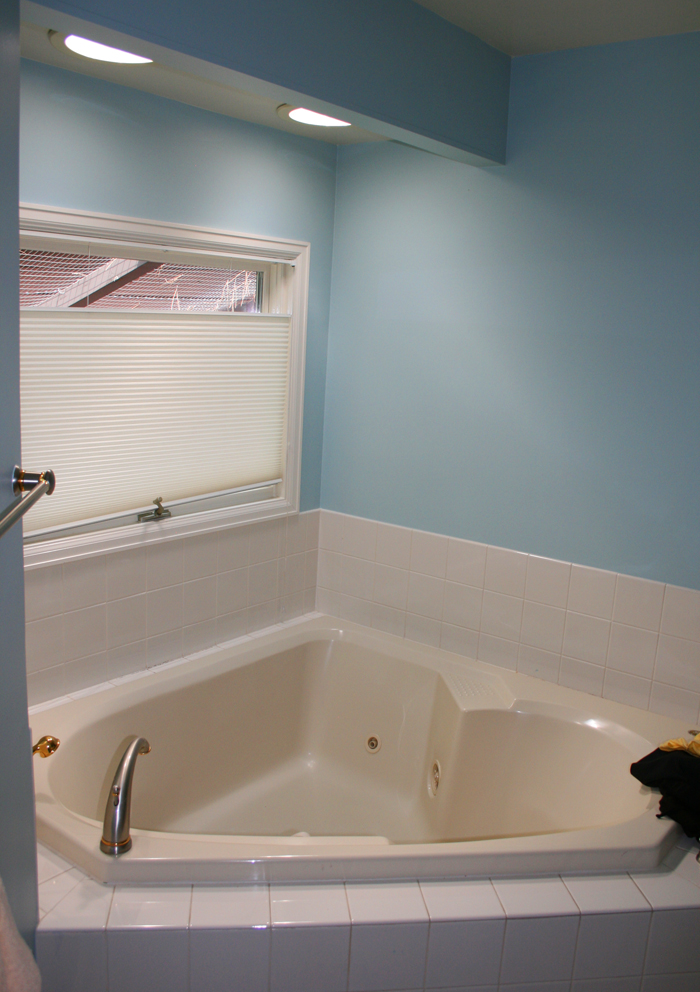 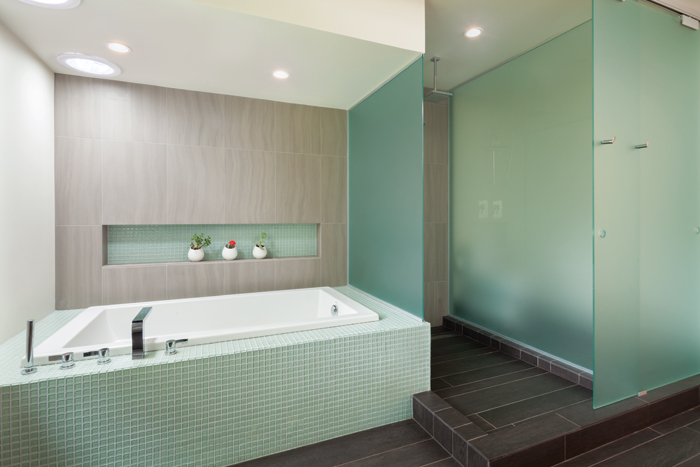