At Home with John Fielder

Facing the Gore Range on the edge of the Ptarmigan Peak Wilderness, a thousand feet above the Blue River Valley, there stands a forest of spruce, fir and aspen sprinkled with wildflowers. It sounds like the perfect place for nature photographer John Fielder to perch his camera—but it’s actually where he’s decided to perch his Summit County home. 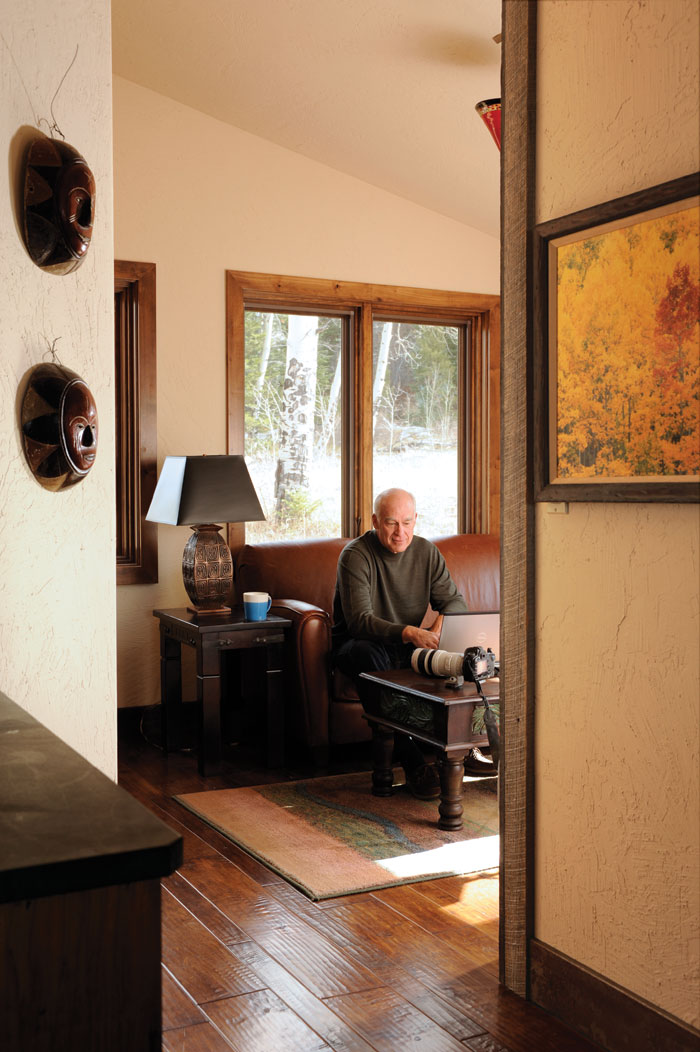 Taken with the “nature-consumed” mining buildings—abandoned structures on which the elements have left their mark—that dot Colorado’s landscape, Fielder wanted to design a modest, eco-friendly home that looked like it had been there for ages. After seeing a 19th-century ore-stamp mill while cross-country skiing near Breckenridge, he built a model of his dream house using cardboard and tape.

Architect Suzanne Allen-Guerra of Allen-Guerra Design Build was unfazed when the photographer offered her the cardboard mockup, which actually resembles the finished structure a great deal. From the flow of the floorplan to the placement of light switches, they planned everything so fastidiously that Fielder hasn’t changed a thing since the home was finished. 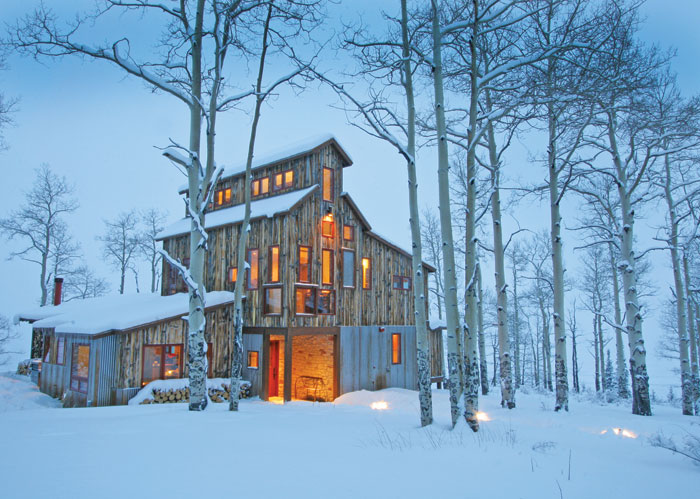 This parcel of land isn’t the only corner of Colorado with which Fielder is well acquainted. He is arguably best known for his best-selling book, Colorado: 1870-2000, for which he drove 25,000 miles and backpacked another 500 to retrace the steps of early Colorado photographer William Henry Jackson. The book’s juxtaposition of Jackson’s historic photographs and Fielder’s modern retakes reveal how much—and, in some places, how little—our state’s landscape has changed since its settlement.

He first fell in love with the Rocky Mountains as a teenager from North Carolina on a school field trip, but it wasn’t until he was 32 and launched his own publishing company, Westcliffe Publishers, that Fielder’s hobby of nature photography became the mainstay of his career.

Not only did he publish books and calendars featuring his own Colorado photography; his small publishing house garnered a reputation for producing high-quality outdoor guidebooks and picture books by nationally known authors and photographers. As his business blossomed, so did his family: he and his wife Gigi had daughters Ashley and Katy, and son J.T.

In the early 2000s, amid the notoriety that accompanied the popularity of Colorado: 1870-2000, tragedy struck the Fielder family not once, but twice. Following the loss of Fielder’s wife, Gigi, to early-onset Alzheimer’s, his son took his own life on a wintry mountaintop. By 2007, Fielder’s grown daughters had moved out of the family’s Greenwood Village home, he’d sold Westcliffe Publishers, and he’d opened a fine-art photography gallery called John Fielder’s Colorado (now in Denver’s Art District on Santa Fe). Fielder knew it was time to move on, and Summit County, which offered instant access to the mountains but was still an easy drive to his Denver gallery, was a natural fit.

Today, Fielder has another reason to travel to Denver: a granddaughter named Gigi, born to Ashley nearly two years ago. “She’s the reincarnation of her grandmother,” Fielder smiles.

We were just wondering… 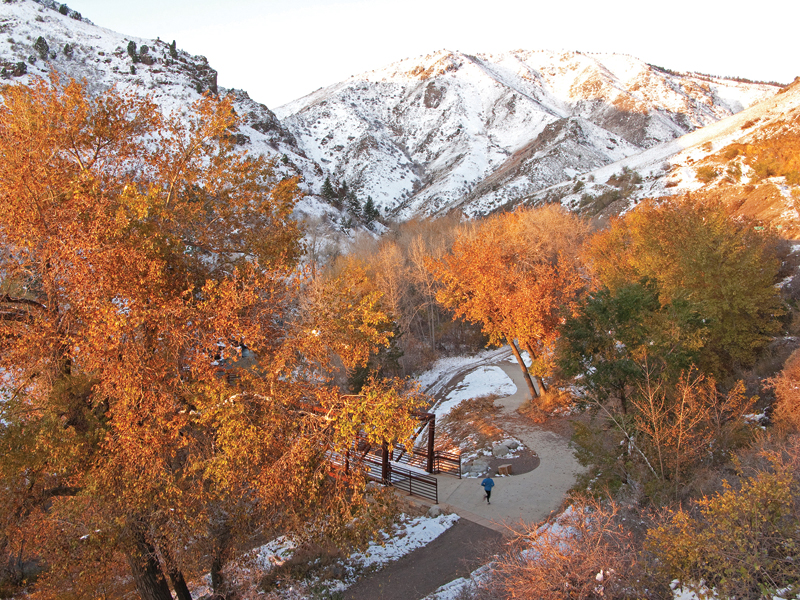 What’s a typical day at home look like? I wake up to the red light on the Gore Range, just as if I were camping out in a tent. I have coffee on the couch and read The Denver Post on my iPad. By 9 a.m. I’m on the computer, editing photos and communicating with people. At some point, I ride my mountain bike down to Highway 9 and back. At 4 or 5 o’clock, I sit on the patio with a cocktail, watch the sun go down, fire up the grill, and have dinner with some Chardonnay before watching sports and, by nine, getting in bed, where I read until I’m fast asleep.

Of all the photographs you’ve taken, do you have favorites? All nature is beautiful, but these two images (right) represent my idea of Colorado at its best. 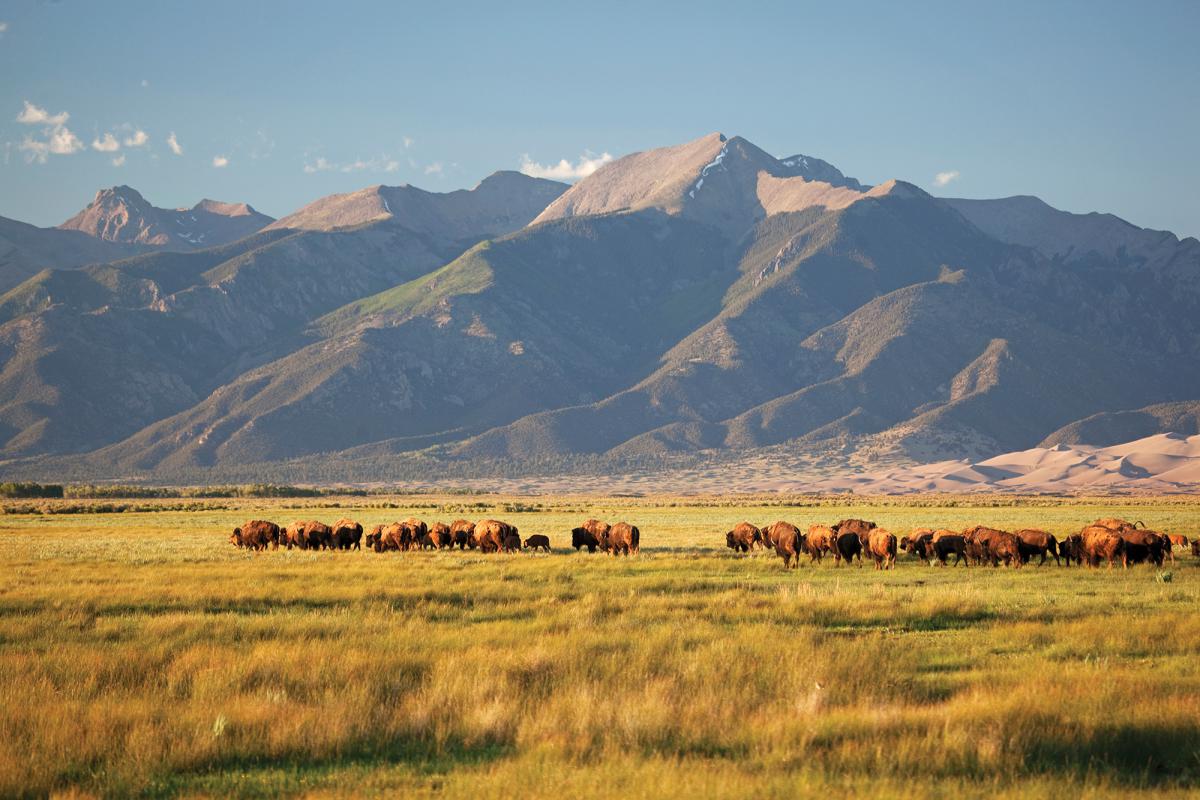 What keeps you passionate about the Colorado landscape? After 40 years of photographing and seeing the things I’ve seen—the moments of light, the landscape, the creatures—you can’t help but be influenced by the glory of it all. I just love being outdoors—smelling it, touching it, hearing it, seeing it. And sharing it. That’s as important as anything else, and that’s why I try to do my part to help protect it.

This article appears in the January-February 2013 issue of Colorado Homes and Lifestyles.
Categories: Stylemakers