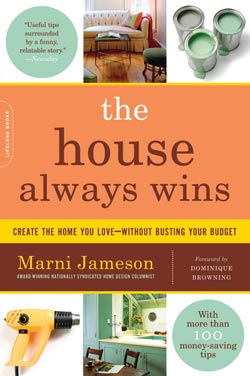 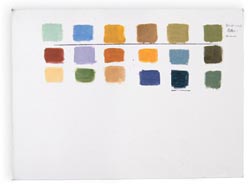 “I saw work when I went to an art festival in Laguna Beach when we lived in Orange County, and I commissioned him to do a piece for over the fireplace. He went behind my house to see which vistas I liked, and he painted a large custom painting. I just love it. It’s California to me. Then he made me a palette board. Everything in my house is a color on that canvas.”

“In French, you call them porte-couteau. They’re French knife rests. You put them just above the knife, a little to the left, and with the stemware, they really twinkle. During my first four years of life, I lived in France, which influenced my life more than I could really know. My mother got these at a very nice department store in Paris.”

Marni Jameson doesn’t take herself—or her house—too seriously. When it comes to home renovation, Jameson has fought the good fight. And she’s not afraid to talk about it to any homeowner who’s floundering. “I’m the girl next door who’s two steps ahead, not because I’ve done it right, but because I’ve gotten it wrong before,” she says.

For Jameson, remodeling homes and writing about them go hand-in-hand. “The fact that I get to do both is just a dream,” she says. She got her start writing home features for the L.A. Times’ lifestyle section. “They wanted the counterpoint to the stuffy interior design content,” she says. “I had built two homes from the ground up—and since, a third. I went, ‘Oh my, I have a whole arsenal of stories!’” That arsenal includes tales of penny-pinching husbands, messy kids and tricky spaces like the mudroom (in fact, she loves her mudroom). You get it all.

Now Jameson’s home design column is syndicated, appearing weekly in 35 newspapers throughout the U.S. and Canada. (In the Denver Post, it’s called “Room for Improvement.”) “It is a funny—I hope—column. A lot of people say, ‘You must be living at my house!’” she says. “It’s very relationship-driven. I do not see where home life and home design are separate, and most magazines just focus on the home design part.” Her most recent feat is her book, The House Always Wins (DaCapo Lifelong Books), which chronicles her own design mishaps and shares her hard-won wisdom. In typical Jameson fashion, it will make you chuckle.

When it comes to her own dwelling, Jameson remains endearingly honest about her own mistakes—and how others can learn from them. She and her husband fell in love with their home because of the views—it felt like “what Colorado is supposed to be,” she says—and then they started trying to make the space their own. “I was initially off-track,” she admits. “I was envisioning mountain lodge décor. I hired a woman who saved me from myself. She said, ‘You are French all the way to the bone! You’ve got western flair, but you’re old French country. What are you thinking?’ She so clearly saw my blind spot.”

Initial missteps aside, what matters most to Jameson is that her house reflects who she is and makes others feel welcome. Stop by for a visit, and you’ll admire the home’s pretty interiors, but you won’t have to take your shoes off at the door.

This article appears in the March 2009 issue of Colorado Homes and Lifestyles.
Categories: Stylemakers