Simplicity. Craftsmanship. Natural beauty. These are hallmarks of design that Scandinavia and East Asia share. Though you couldn’t touch both places if you spread your hand on a globe, they have somehow forged the same aesthetic values.

“We call it Scandi-Asian,” says the sparkly homeowner with a laugh, describing the flavors that informed the renovation of her 1889 Victorian home in the heart of downtown Boulder. “Maybe we’re starting a new trend.”

The fusion is striking and yet peaceful—Japanese-style, white-oak slats that separate rooms without obstructing light; low-slung minimalist midcentury-modern Danish furniture that sets the eye at ease; and bright pops of colorful 1950s enamelware that seem to hum on their ingenious floating shelves. The husband, who’s in the garment industry, gravitates toward Asian design, and the wife, a creative entrepreneur, toward Scandinavian. “The result is surprisingly harmonious,” says builder, family friend and neighbor Joel Smiley of Smiley Construction, who renovated the house, alongside architect Laura Schaeffer.

Smiley and Schaeffer scraped the entire home save the front three walls. They added a second story in the back and a basement below. “It was basically a new build,” the homeowner says, but one that honors the original home’s craftsmanship and traditional design. “The home is a historic artifact that’s interesting in its own right,” Smiley says. “If you just wash over it, you might as well be building an entirely new structure.”

The team designed a new roofline on the addition that mimics the original, stripped down the interiors of the original walls to brick and put a premium on incorporating natural materials. “There’s a misconception that modernism is a free art form and you can do anything,” Smiley says. “Just as in art, good modernism comes from mastering the traditional. To tip your hat to these beautiful, old buildings while bringing in fresh experience, you take patterns that are totally relevant and bring them to a modern finish.”

The result is modern, all right, but incredibly warm, with an open layout that still protects the integrity of each room, cleverly divided by open shelves and wooden screens. One entire wall of the kitchen opens to the back patio, creating an indoor/outdoor space the homeowners use eight months out of the year. A skylight spans the entire home and fills it with light, and warm white oak throughout grounds the space. “None of the wood is varnished. It’s just oiled,” the homeowner says.

The couple didn’t work with an interior designer. “We came up with everything,” the wife says. Smiley allowed them to make decisions as they went along instead of planning it all out in the beginning. “That way you can see things progressing and change your mind. It’s a really nice way of working,” she explains.

Because the homeowners’ children are now 17 and 19, they built it with their impending empty nest in mind. They had owned the home for years as a rental property, and once the kids got close to college-age, they decided to sell their existing home and renovate it for the next phase of their lives. “The kids didn’t get their mack-daddy bedrooms with en suite bathrooms,” the homeowner says, laughing. “Just having the change of environment was a new beginning for us.” 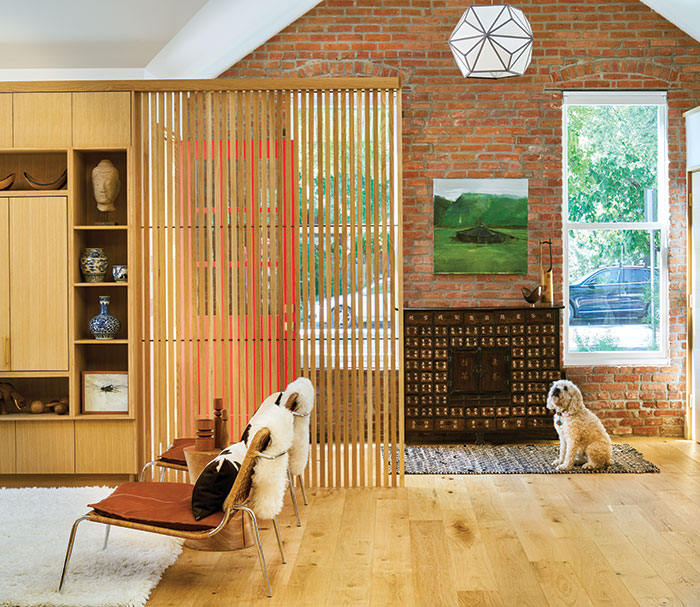 More wooden slats separate the entryway from the living room and invite the light in, while tall windows let the family dog, Ginger, keep neighborhood watch. The console is an Asian antique, and the painting above it is by Boulder-native artist Sara Sanderson. “I have five or six of them. I can’t get enough of her,” the homeowner says. The art-deco-style linen-and-balsa-wood chandelier is from Seattle artist Erich Ginder. 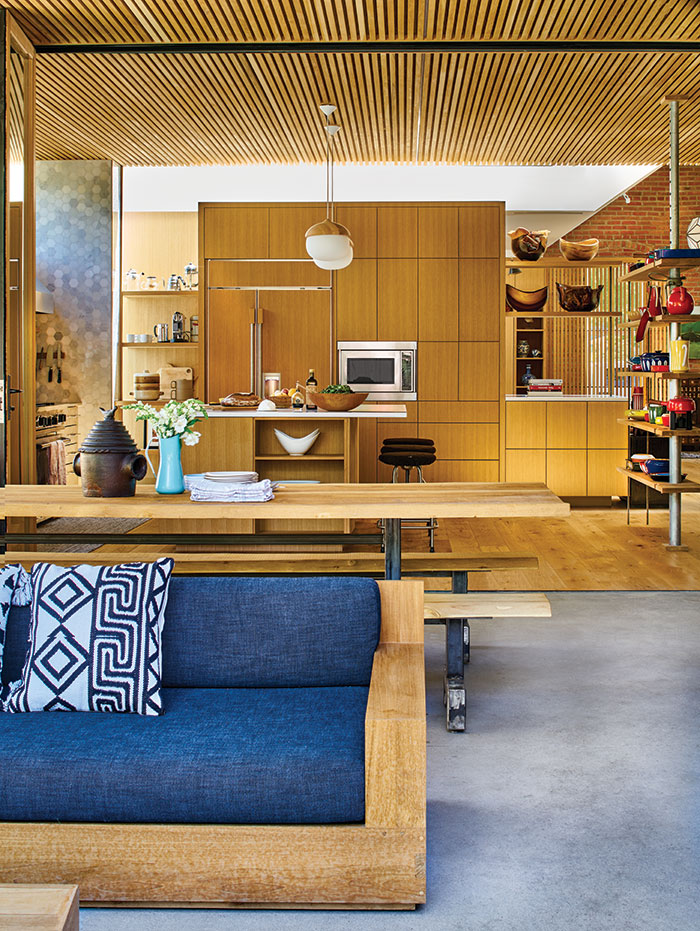 The patio, with the folding glass doors wide open, serves as an extension of the kitchen and dining area. The connection between inside and outside is so seamless it’s difficult to discern, but the concrete marks the beginning of the home’s outdoor living space. The sofa is from Restoration Hardware, and Smiley hand-made the picnic table as a gift. “The picnic table and benches are made from the tree that we had to cut down in our front yard,” the homeowner says. “He surprised us with it. It’s part of the house’s story.” The kitchen chandelier is from Terho, which means “acorn” in Finnish. “More wood—we’ve always loved wood,” she says. 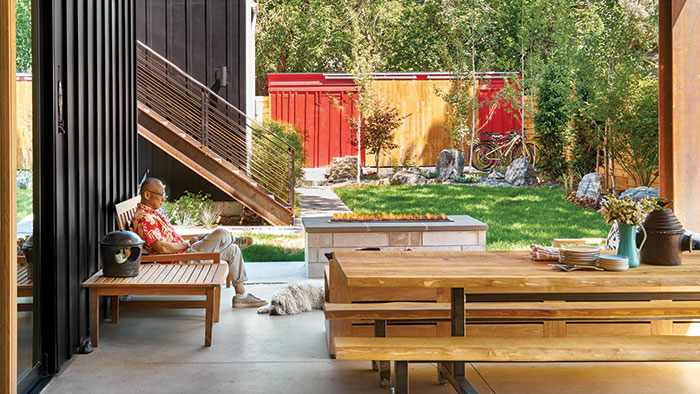 A modern, rectangular fire pit keeps the patio livable eight months of the year. The two-story garage (at left) boasts a studio apartment upstairs, and a shed provides more storage space. The landscaping, done by 1st Green Colorado, incorporates aspen trees, rocks and native plants. Schaeffer and Smiley employed industrial I-beams on the stairway to the guest studio, for a modern look that pays homage to the past. 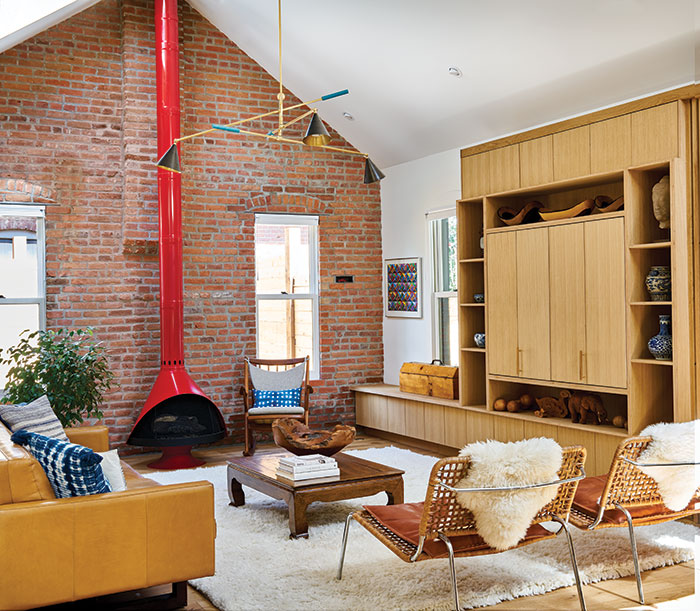 The modern gas fireplace, framed by two antique, teak rocking chairs (one not pictured), is from Malm, and the family uses it every day in the winter. The original brick wall houses the antique toy car to the right of the far window. O’Lampia custom-made the mobile chandelier, and the leather sofa is from Room & Board. “We bought those woven chairs from a shop in Costa Rica,” the homeowner says. 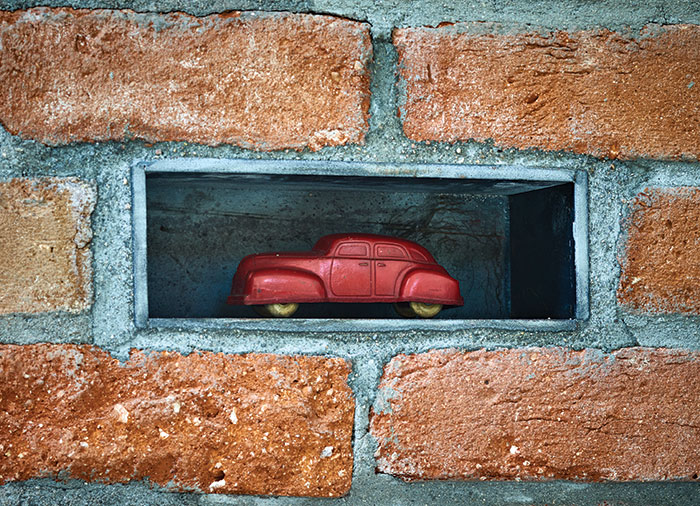 Builder Joel Smiley found an antique toy car during the excavation and then carved a brick out of the living-room wall to display it. “That toy was made in the 1930s, when people had fewer possessions,” Smiley says. “It was probably very precious to somebody, and it tells part of the home’s story.” The homeowner adds: “Joel is all about these little details—he wants to keep as much of the original house as possible, even when he’s starting from scratch.” 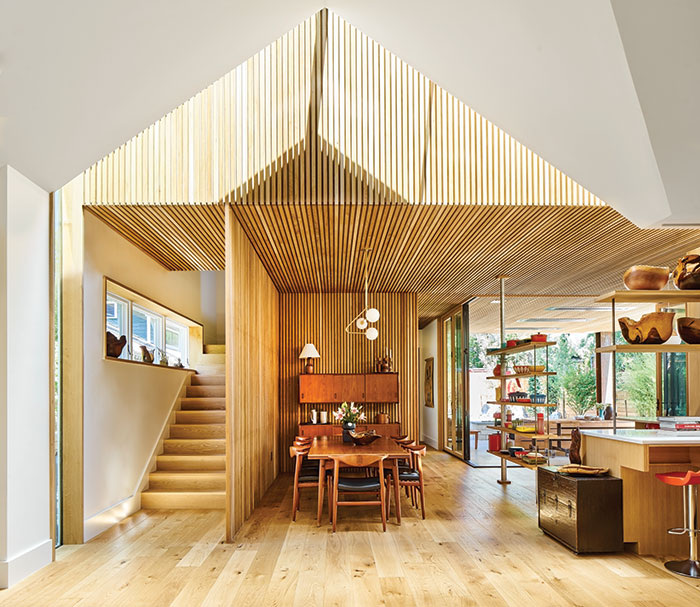 A huge panel of glass brackets the home from floor to ceiling, illuminating the dining room and kitchen with natural rays. “It brings in a lot of light indirectly throughout the day,” the homeowner says, and the peaked shadows that travel across the ceiling honor the original roofline. The back kitchen wall of windows opens completely to the outdoor patio. The floating shelf that separates the kitchen and dining room holds the brightly colored 1950s Cathrineholm and Dansk enamelware that the family uses every day. “There was an industrial-steel pole in the kitchen that was holding the house up during construction,” the homeowner says. “We still needed the support, so we just cleaned the pole and made shelves out of it.” 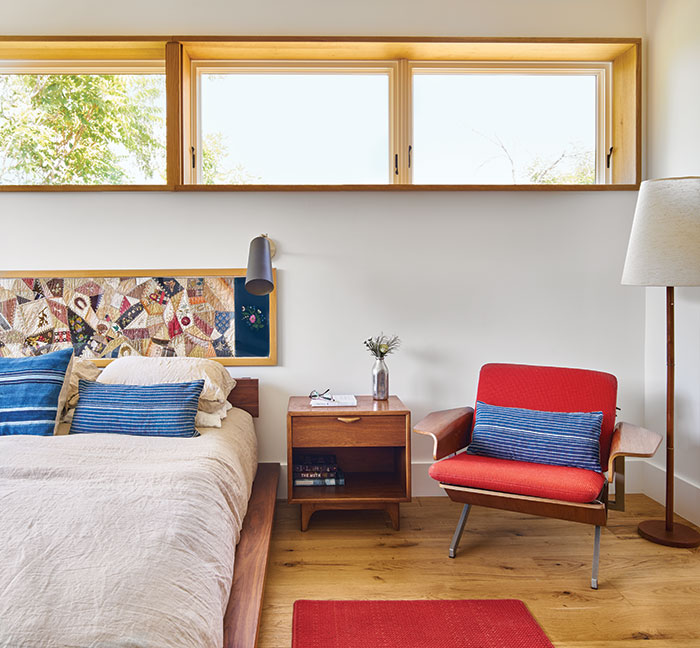 The art above the bed is a quilt done by the homeowner’s great-great-grandmother. “I’m fabric-crazy,” the homeowner says. “I’d frame every fabric if I could.” The couple bought the red midcentury-modern chair at an antique show in New York. 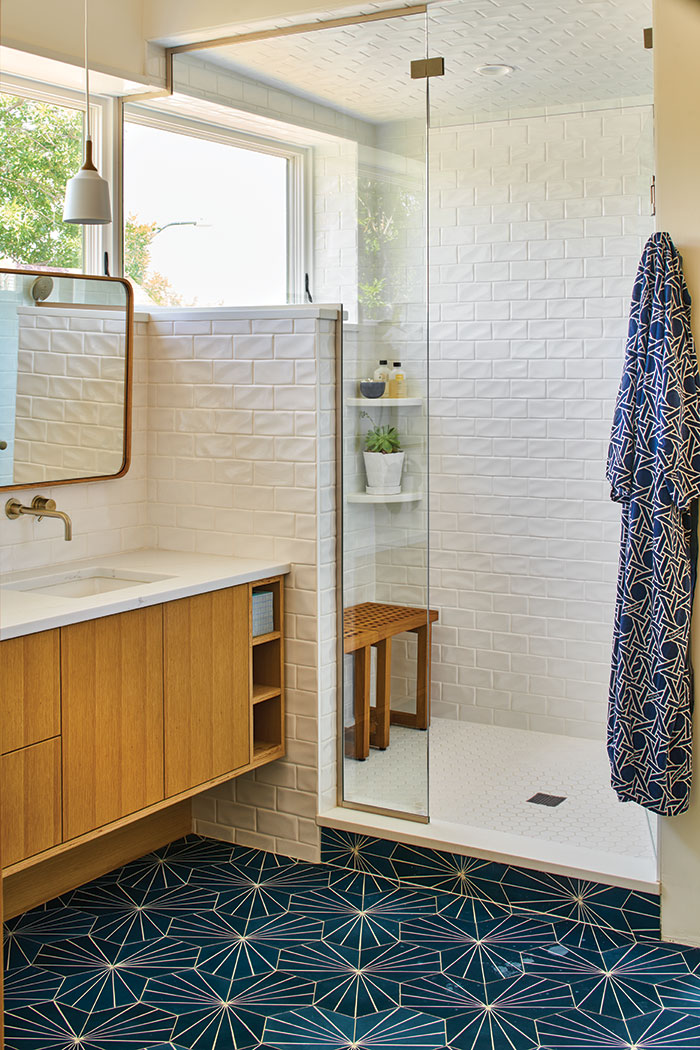 The design incorporates textured subway tile, Emtek fixtures, concrete floor tiles and high windows that keep the space sunny yet private. Smiley and his team hung the mirrors—from Rejuvenation—horizontally above the sinks, because they were too long to hang vertically. “I walked in and said, ‘The mirrors are on the wrong way,’” the homeowner says. “It was a creative solution that totally worked.” 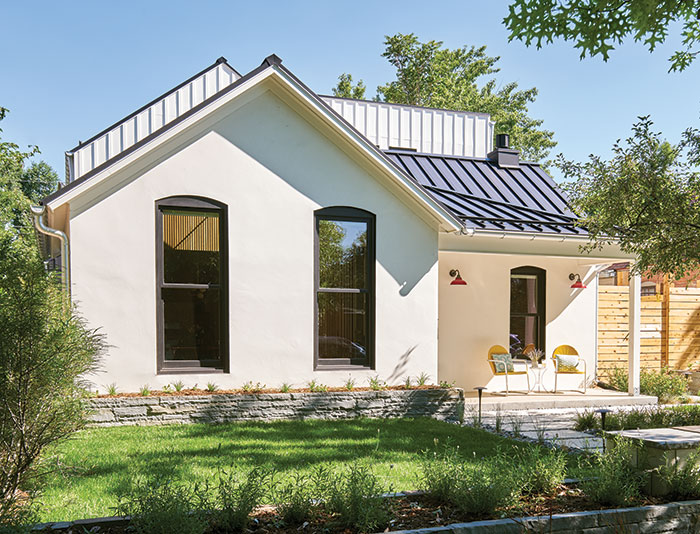 The front of the home is all that remains of the original 1889 Victorian. It’s understated enough to verge on modest—in keeping with the homeowners’ minimalist aesthetic. “The whole house was scraped from the back,” the homeowner says. “You could see right through it during construction.” Right angles and stone planters—designed by 1st Green Colorado—characterize the tidy front and back yards.