Art on the Open Plains

From the blink-and-you-miss-it town of Byers (45 miles east of Denver), the non-profit M12 Studio creates and supports some of the most captivating contemporary art in the country 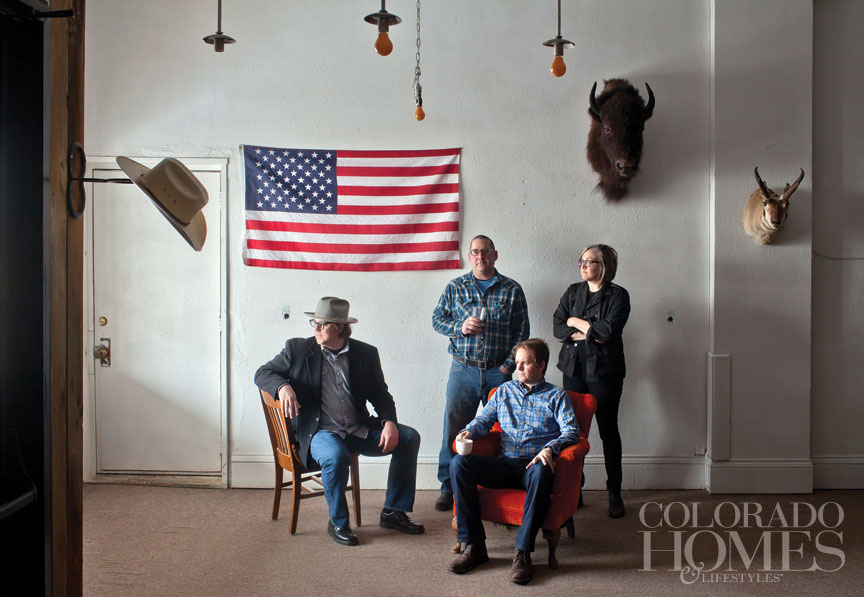 The group’s headquarters is a former feed store on Main Street, transformed into a hip, stripped-down working space. Among its leaders are Richard Saxton, an art professor at the University of Colorado, and Kirsten Stoltz, a former curator. And the group’s mission is nothing less than to help solve the biggest problems of the 21st century.

CH&L: You have some lofty ideas floating around here. Tell me what M12 does.
Richard Saxton: At a basic level, we work with small communities and do interesting arts and culture projects. We saw a gap in the representation of arts and culture that existed in rural communities, and we seek to fill it. Sometimes, our projects are self-initiated, where we see something really intriguing to us and we think there could be a creative response to it, and sometimes we’re invited or commissioned to do a project in the community.

Very early on, when we formalized the group, we wanted to be as informal as possible. We see ourselves as an organization that’s a fusion of practitioners—artists, architects, designers and other creative professionals who make things—with a focus on education and social engagement.

CH&L: And tell me why you’re so drawn to rural communities.
Kirsten Stoltz: I was born in Yuma, Colorado, the fifth generation of my family to live there. Richard’s family homestead is in western Nebraska. So some of it is tied to identity. Many of the artists we work with are in the Midwest or Great Plains regions. They either live in rural communities or they’re from rural communities. We all see rural America as a dynamic, changing space that gets overlooked in the larger world of contemporary art and cultural production. Contemporary art is pushed to the coasts, but we truly believe this place is just as inspirational as urban places. We prefer it here because it allows us the space and freedom to think. And there’s no a lack of culture in rural places.

CH&L: How?
RS: Our Black Hornet car production is a great example. . We look at the art that already exists in the rural landscape. What’s ripe for creative visual expression? The dirt track exists on its own terms. The artistic genius doesn’t have to be implanted.

KS: I love that we don’t set up something and tell people, ‘This is art.’ We go out there and interact with the community in a natural way. It’s different from saying, ‘Okay, we’ll design a sculpture in a public park or in the city square.’ The racetrack is the city square on Saturday nights.

CH&L: So are you focused on preserving rural communities?
KS: It’s more about evolution. We’re interested in how contemporary art can trigger dialogue about important issues. Some projects never become anything tangible, but we think the conversation is truly valuable.

CH&L: Can you give us an example?
RS: The Campito Project. We looked at the sheepherding industry and the architecture of the sheep wagon. The reality of sheepherding is not the romantic notion of cowboys running their sheep. We’re importing rural knowledge about sheepherding from Peru, Mexico, Bolivia. The herders are often immigrants who live here for three years, and they’re living in these chuck wagons. The design hasn’t changed much since the 1800s.

If we value sheepherding culturally—and I would argue we do—then some things need to change, and one of those things is the design of the wagons. So we redesigned it. We actually created a series of designs, all of which had solar energy platforms, composting toilets, heated showers, a portable garden, a global communication system—elements that could really transform the lives of sheepherders. But we’re not going to be a sheep-wagon production company. We want to highlight the fact that it’s of value to treat sheepherders well.

KS: We want to get people thinking and talking.

CH&L: Like you do with Gran’s University. We love this idea. Tell us more.
RS: Gran’s University is a two-part project. We wanted to archive intergenerational knowledge that might specifically deal with rural experience. We built this trailer, and we take it out and collect stories and knowledge from our elders. Our professors are grandmothers and grandfathers. So, for example, we took the mobile unit to the Washington County Fair and asked people what they wanted to preserve. Then we captured this knowledge through drawings, recorded interviews, photography and some video.

We also work with our Swedish collaborator, Kultivator. We looked at things like the root cellar and the sod house, and we found some fusion in architectural styles in rural Sweden and in the rural Great Plains. [In Dyestad, Sweden], we built an underground food preservation structure with a classroom on top. It’s called Elders’ Hill. Now they organize workshops with elders in the community who have knowledge about food preservation that’s deeper than what you get when you Google it. The experiential practice is, in its way, the art.

CH&L: Why Sweden?
RS: The group Kultivator does a lot of the same things we do. That’s another really wonderful thing about working in this field of rural contemporary art: It’s a budding field. The people involved are very open to exchange. We all know it’s not just about art. We’re saying together that the time has come to represent rural space in contemporary art on its own terms. It’s not plein air painting, where the culturally elite go out and paint the fields.

CH&L: And tell us why that matters.
RS: M12’s work can be the conduit between rural and urban spaces, and in that chasm are some of the most important issues of the 21st-century reality. We’re talking about food production, natural resource management, immigration, land use, intergenerational knowledge—major issues of our time.

Almost nothing we do has commercial value. How are you going to sell a race car? How do you sell this idea of Gran’s University? At a lot of cultural institutions, the businesspeople ask, ‘What’s the return?’ There is no return here. We’re interested in the conversation. We believe that’s invaluable. If we can leave a body of work that is creating a culture of dialogue, then we’re doing our job for this time and place.

Want to learn more about M12 Studios?
The group’s newest book, A Decade
of Country Hits: Art on the Rural Frontier, is available for pre-order at
japsambooks.nl, or visit m12studio.org.

This article appears in the January-February 2014 issue of Colorado Homes and Lifestyles.
Categories: Art