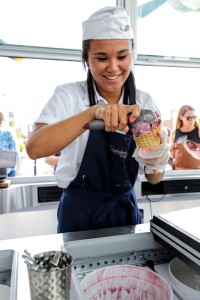 The experience of going out for a scoop of ice cream can be a magical one. Colorful flavors line a wall of glass, the smell of waffle cones wafts the air and upbeat music plays. Arguably, there are few places happier than an ice cream parlor on a hot summer’s day. Paul Tamburello, ice cream enthusiast and owner of Little Man Ice Cream Group, knows a thing or two about recreating that nostalgic experience for ice cream goers of all ages. 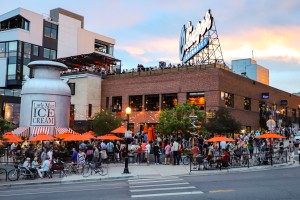 The name “Litte Man Ice Cream” began as a tribute to founder Paul Tamburello’s father Peter Tamburello who was nicknamed “Little Man” for his small stature. The company thrives on its mission to create neighborhood stores through nostalgia, though Little Man never did things in an ordinary way. Well known for its unique architecture, the company mimics retro roadside attractions at many of its locations. 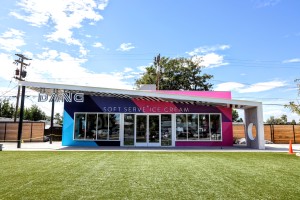 “Back in the day, these awe-striking structures would attract people off the highway,” Paul explains. “In Colorado, there wasn’t a ton of roadside unique architecture but there were places like the Humpty Dumpty where the cheeseburger was first created, World’s Wonder View Tower in Genoa and the Coney Island Boardwalk. I remember the exact moment when I saw these structures and the sense of wonder that I felt. These places brought an element of nostalgia because they can transport you to a different time and place.” 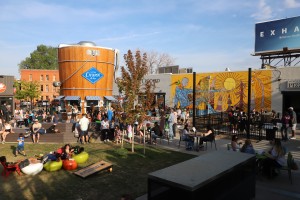 For Paul, it wasn’t all about sparking child-like wonder through nostalgia. “I always say that familiarity destroys wonder and roadside architecture, in a nutshell, is all about wonder and the unfamiliar,” says Paul. By taking something people see in everyday life and turning it on its head, Little Man Ice Cream Group draws customers in not just with delicious ice cream, but through the curiosity around the architecture of their shops. 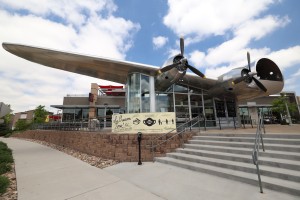 Recently completed, The Constellation in Central Park Denver stands out for its sleek design. The structure mimics a large steel airplane wing. “It was a truly unique design process unlike any I have done before,” says the architect on the project, Michael Koch of Koch | Covotsos Architects. “There are no straight lines. The replica airplane wing curves and slopes in two directions and we had to design the small interior space in a tiny footprint.” This extraordinary project was incredibly tricky. After overcoming the struggles of designing, the next step was to find a way to station the 75-foot-long aluminum wing on top of a glass kiosk. With the help of a contractor, the airplane wing sits beautifully suspended over Martin Luther King Blvd. 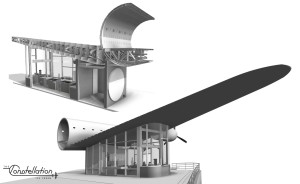 The Constellation went on to receive several design awards, including an Honor Award from the American Institute of Architects. “What I am most proud of is that in a world with so many ordinary buildings, we had the opportunity to build something different that still creates a sense of awe and wonder every time I see it,” Koch explains.