An Urban Cherry Creek Home a Lifetime in the Making 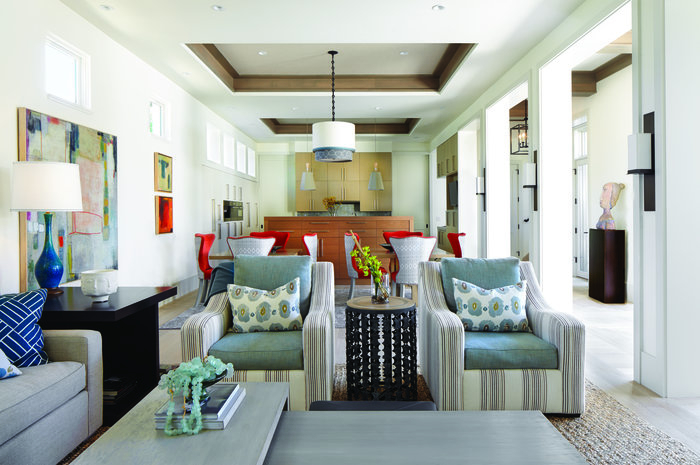 After 37 years of marriage and 10 homes together, Bob and Janis Hampton knew what they liked—especially in architecture and design. The couple’s 11th house was the first project they conceived from the ground up, giving them the chance to customize spaces and features for the next phase of their lives together.

“We met in Dallas, and Bob’s work as a media executive took us to Palm Springs and New Orleans before we settled in Denver,” says Janis Hampton, a lawyer who also enjoys ballet dancing. “Previously we lived in a traditional Cherry Hills house with a big yard requiring a lot of upkeep. Since our children were grown, we were excited to move closer to the city and explore a simpler, more contemporary home design.”

The couple found a lot in Belcara, a private gated enclave in Cherry Creek, and hired Denver architect Carlos Alvarez of Alvarez Morris to create the modern house they had in mind. “We incorporated the lessons we’d learned from all of our other homes into this project,” Hampton says. “We asked Carlos for an open living area with high ceilings, a main-floor master suite, and a large courtyard. Bob and I wanted to welcome our family and friends for visits, so we proposed home offices for each of us that could do double-duty as guestrooms. Carlos really understood us, and helped us envision our dream house.”

“The Hamptons were interested in scaling back and creating a modern home that maximizes every space,” Alvarez says. “The floorplan is the right size for them, and all of the rooms are useful. The tall ceilings add volume, and because the main living areas open to the courtyard, the house feels quite large.”

The design team conceived a 6,500-square-foot, four-bedroom home that blends minimalist styling with traditional details like tray ceilings and hardwood floors. “The lines are clean in our house, but it’s not stark,” Hampton says. “With the contrast of the heavy doors and white walls, we sometimes feel like we live in a loft.”

To style the home’s interiors, the couple called on their trusted designer Heidi Bonesteel, principal of Bonesteel Trout Hall in Pacific Palisades, Calif. “This is the fourth house we’ve worked on together, so I know the Hamptons’ tastes,” says Bonesteel. “Bob and Janis appreciate things of lasting quality, they both have a great eye for art, and they love color. Together, we developed a design palette for this home that fits their relaxed lifestyle.”

She incorporated some of the Hamptons’ existing pieces and also took them shopping for new artworks. “They already owned the Mary Long oil painting with watery blues and pops of coral, which was perfect for the dining room,” she says. “At a gallery in Los Angeles, the three of us fell in love with the yellow-green Francine Matarazzo abstract that now hangs above the sofa. The process of choosing art was a real collaboration.”

Kitchen Distributors designed a professionally outfitted kitchen well suited for entertaining, with amenities like a built-in Miele coffeemaker, a steam oven, Waterworks tile backsplashes, and unusual pendant lights that Bonesteel found in Paris. The couple discovered a stunning slab of quartzite at Arizona Tile, and sourced the natural stone for the kitchen island and counters. “My husband and I cook more than we ever have in our lives, and we owe it to this kitchen,” Hampton says. “We’re trying to eat more healthy foods, and many of our recipes have a lot of ingredients. Even though it’s just the two of us, we actually use both of the dishwashers.”

The project took two years from start to finish, and the Hamptons are thrilled with how it turned out. No longer tied down to maintaining a big house and yard, they enjoy exploring the nearby galleries, shops, and restaurants of Cherry Creek North. “We love being here. Our whole life revolves around this area,” Hampton says. “After four decades together, Bob and I are having more fun than ever.” 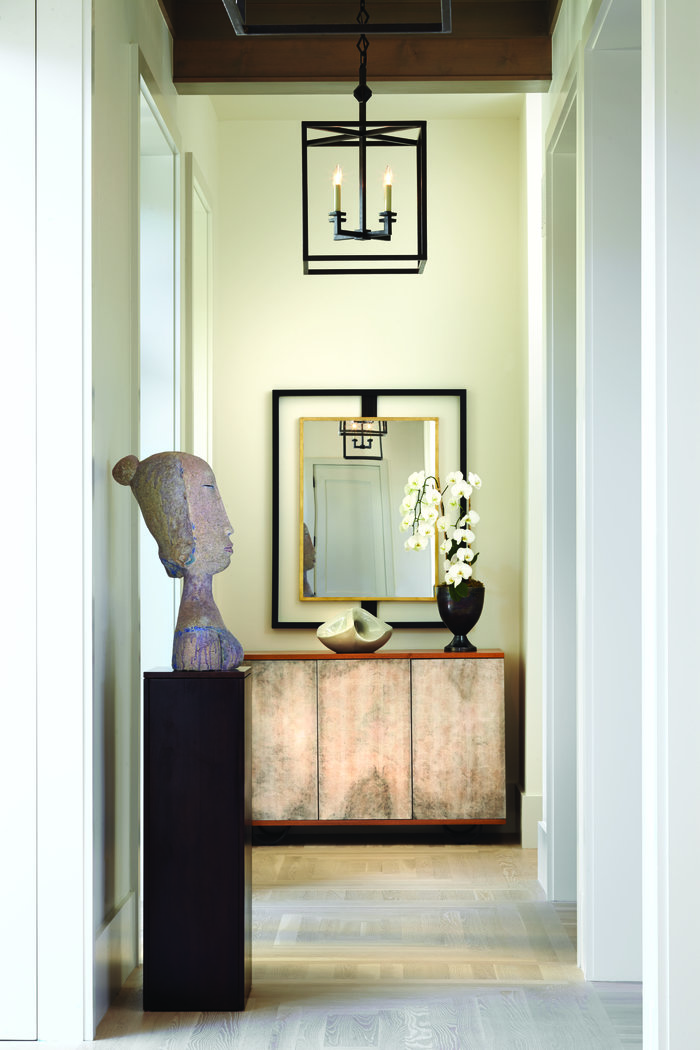 The Peter Vandenberg stone sculpture is a welcoming presence in the hallway, illuminated by a spare Circa Lighting iron chandelier. Designer Heidi Bonesteel had the custom chest covered with weathered parchment paper to reference the texture of the stone, and hung a double-framed mirror above it to reflect the light. White oak floors by Rock Solid Hardwoods unify the spaces throughout. 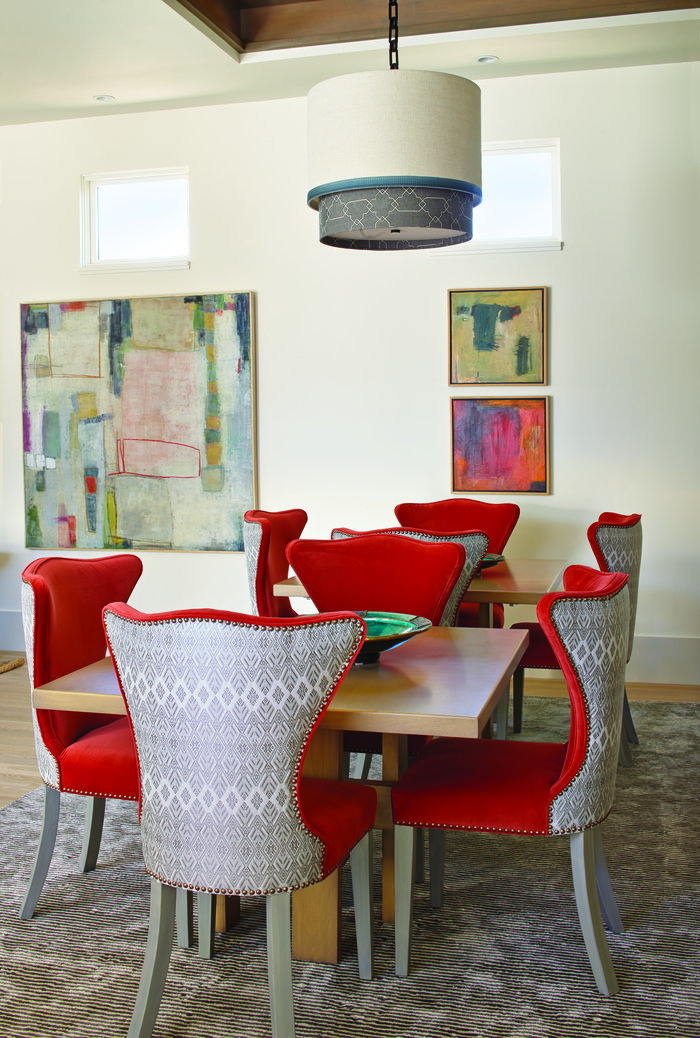 The Hamptons enjoy playing bridge, so Bonesteel had two square tables crafted for the dining area. “They’re extremely versatile, because they can be connected to function as one long table for dinner parties,” she says. The designer chose Soie de Lune silk (“a splurge”) for the back of the chairs, and covered the seats and interiors with orange Pindler velvet accented with nailhead trim. The couple found the large Mary Long oil at a Sante Fe gallery, and the two smaller paintings are by Bonnie Goldstein. 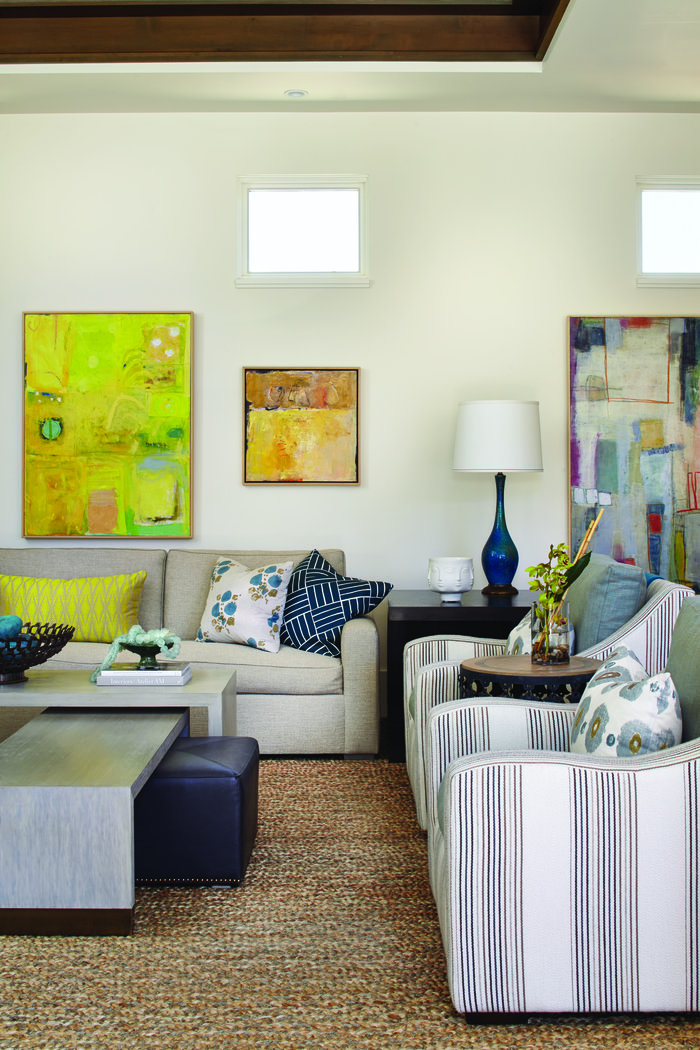 The large yellow Francine Matarazzo painting in the living room corner influenced Bonesteel’s choice of complimentary colors and fabrics for the living area. The textural Merida rug is handwoven abaca. The smaller painting is by Bonnie Goldstein. 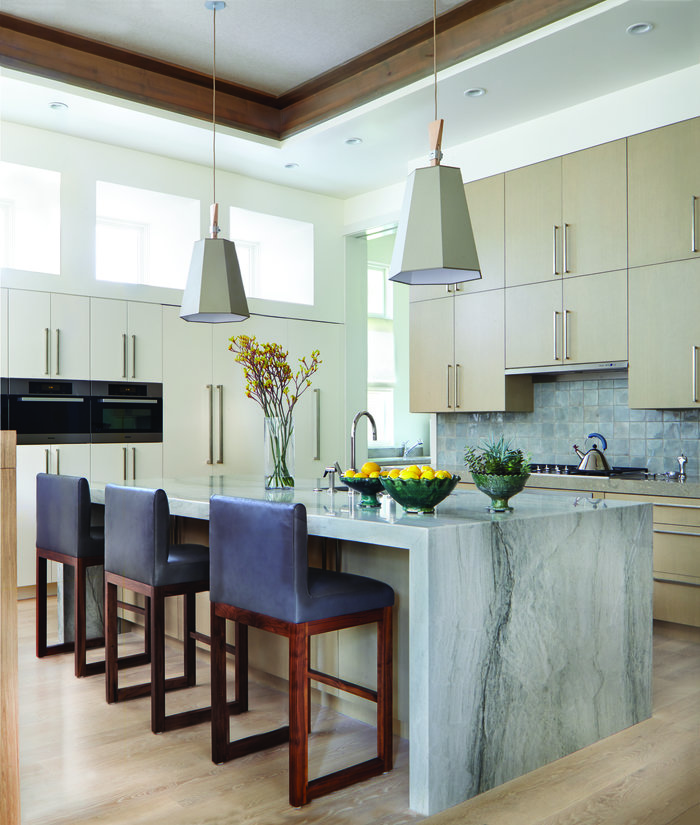 Kitchen Distributors designed the contemporary professionally styled kitchen. An oversized island covered in natural quartzite stone from Arizona Tile provides abundant workspace in the open kitchen. A pair of well-mounted Miele ovens include a traditional convection model and a steam oven Hampton calls “the best appliance I’ve ever owned;” she uses it to heat quick dinners and steam vegetables. 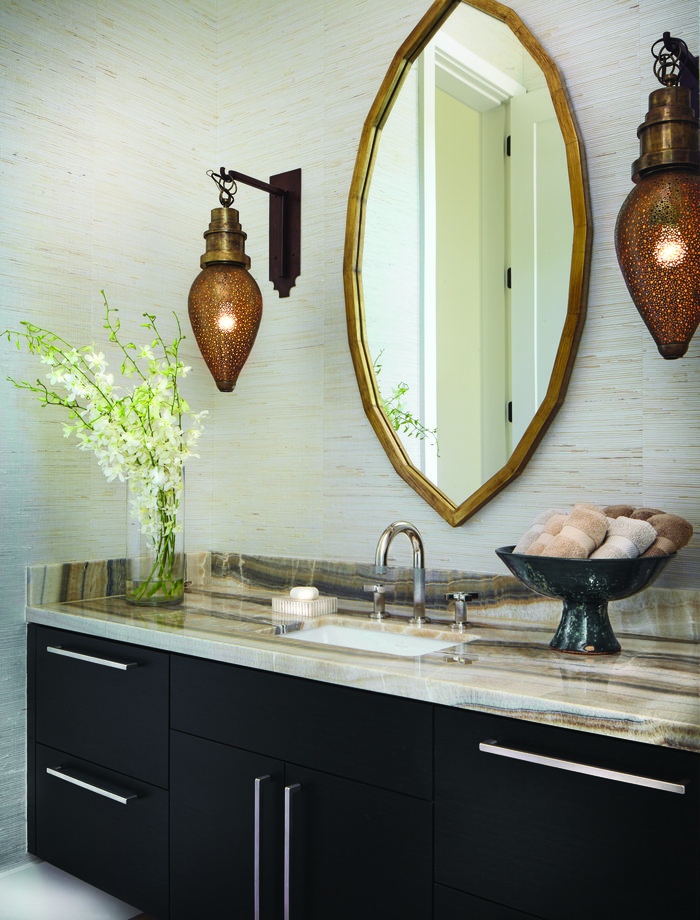 Counters of polished striated onyx make a dramatic statement in the powder room. Bonesteel found the dramatic amber glass sconces in Morocco, and paired them with a tall scalloped mirror in a weathered gold finish. The cabinets are by Kitchen Distributors. 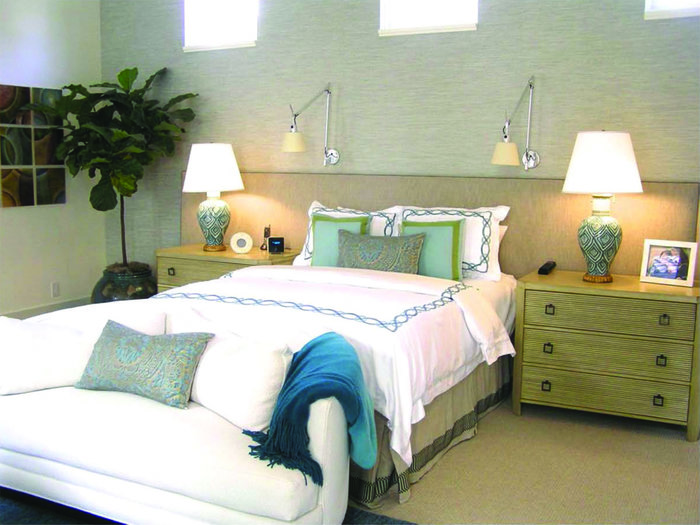 Bonesteel covers the master bed with white linens from Scandia Down accented with Holland and Sherry throw pillows and a neck pillow of Fortuny “Veronese” fabric. A pair of custom nightstand chests are topped with Nicky Rising ginger jar lamps, and the wall-mounted, extendable Artemide fixtures are perfect for nighttime reading. The custom white sofa is draped with a cozy tonal blue cashmere throw.

In the main-floor master bedroom retreat, Bonesteel hung a pair of Janet Lippincott watercolors vertically over a blue desk from Made Goods. The porcelain stool is from Mix Furniture in Los Angeles, and the alpaca rug is from Rosemary Hallgarten. In the adjoining bathroom, Bonesteel placed a Don Quade painting over the bathtub so the homeowners could see it every day.