Not many people get a mulligan in designing their dream home. But for Mark and Melissa Manassee, that’s exactly what happened. The French Norman house they had romantically envisioned and custom-built in 2006 turned out to be a mismatch. The somber interior didn’t fit their lighthearted family spirit, while the floor plan they had designed just wasn’t in sync with the lives of their young family of five. “Our house felt heavy and dark,” says Melissa. “And every time we tried to fix it, we kept making it heavier and darker.”

For years, the couple had been taking mental notes of what they wanted to change, but it was a two-year stint in Paris (thanks to Mark’s job) beginning in 2011 that cemented the idea of a resurrection. “We moved into a 2,500-square-foot Parisian apartment with only the essentials from home,” remembers Melissa. “It felt so good to live more simply. I realized how little we actually needed, so when we returned, we started designing with a meaningful purpose.” 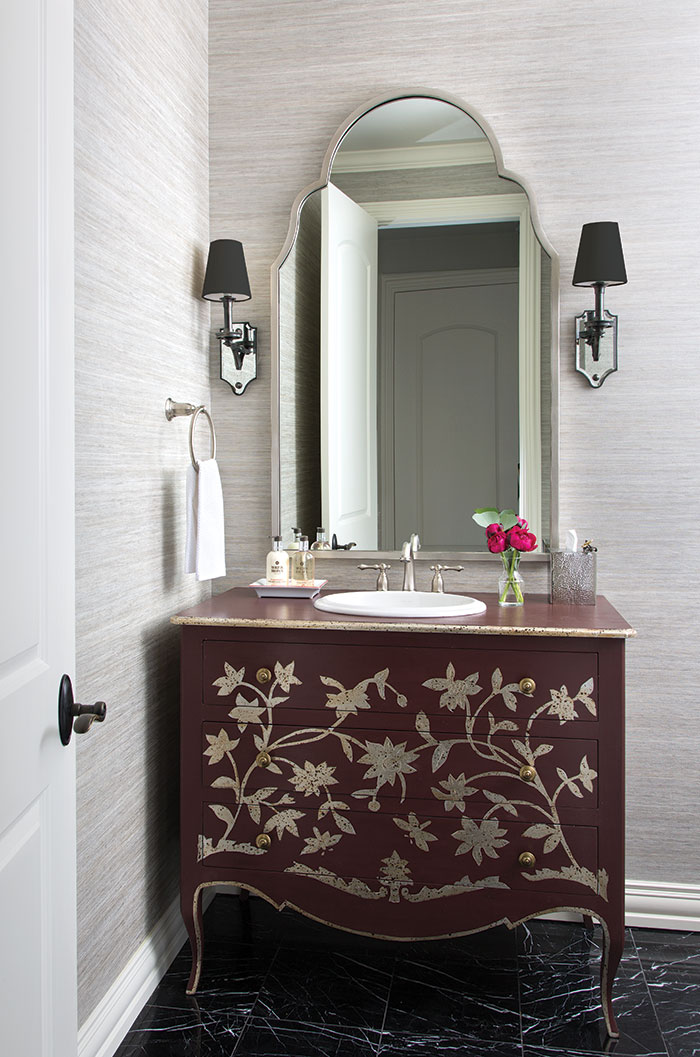 In the formal powder room, a mirror from Mirror Image Home hangs over a vanity by J. Tribble Collection with the Sophia Sink Base. The vanity is painted in Sherwin-Williams Rookwood Dark Red with Gold/Silver Leafing, and the wallpaper is Talamone Seta by Élitis. The Verona Mirrored Sconces are by Visual Comfort.

Exactly 10 years after the Manassee family first moved into their Crestmoor home, they moved out for three months to let Devon Tobin of Duet Design Group do her thing. The family had three priorities: an interesting interplay between the interior and outdoors, designated spaces for cozy reading nooks, and a small salon where people could gather and sit for conversation and cocktails. They achieved their goals by adding a second set of French doors in the breakfast-nook area, closing off a passageway between the living room and music room, and turning a front living space into a blue-toned, intimate salon with a luxe sofa, sumptuous chairs, wainscoting and gold-framed art.

“I was so inspired by the fact that they were Americans who had lived abroad,” says Tobin. “We just needed to infuse this old-world French chateau with natural light and pops of saturated color.” She installed hardwood floors in the master bedroom and closet, lightened up the black hardwood floors on the main level, brought in a neutral palette for soft furnishings, eliminated the massive cherry-wood built-ins, painted the entire house in warm tones and doubled the amount of window space in the family room. ​ 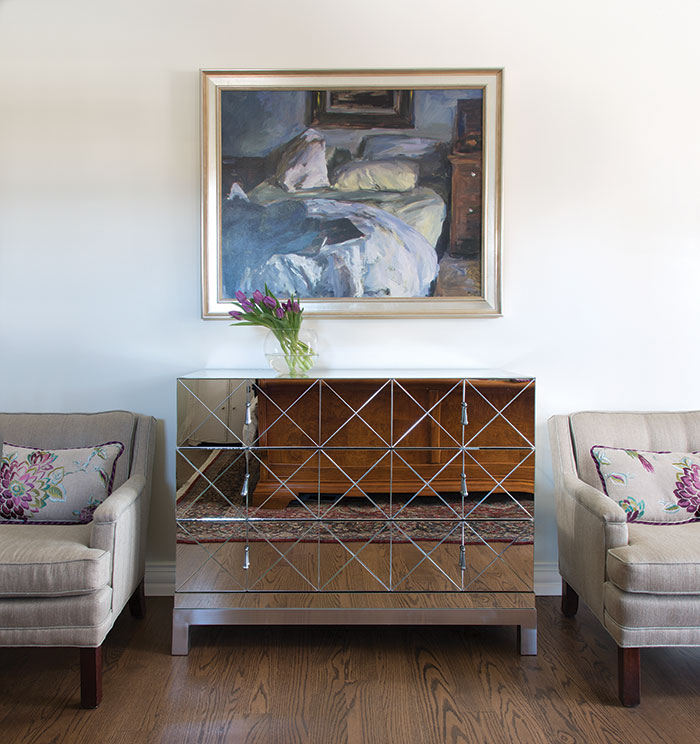 This Parisian-style Crestmoor renovation included an elegant  seating area. Existing chairs were reupholstered in Twill Litchfield in Lagoon. The Century Furniture mirrored dresser was moved from another room, and the painting is by Marc Whitney of Laguna Beach, California.

“Duet made the house feel younger. They de-aged it by making it more playful, elegant, sexy and fun,” says Melissa. “They turned it into the house it always should have been.” Her husband concurs. “We wanted the house to be a reflection of our favorite spaces from places that we visited [which also includes China, the birthplace of the Manassees’ three adopted children],” Mark says. “We asked for comfortable yet stylish, with clean lines but not contemporary. Duet gave us traditional without the fussiness.”

And now, for the first time, the house makes sense. “In Colorado, where there are such expansive spaces, it’s nice to have a cozy retreat at home,” says Melissa. “When our friends and family come over, they feel comfortable. It’s truly a calm place—albeit one with three active teenagers.”

THE LIVING ROOM BEFORE 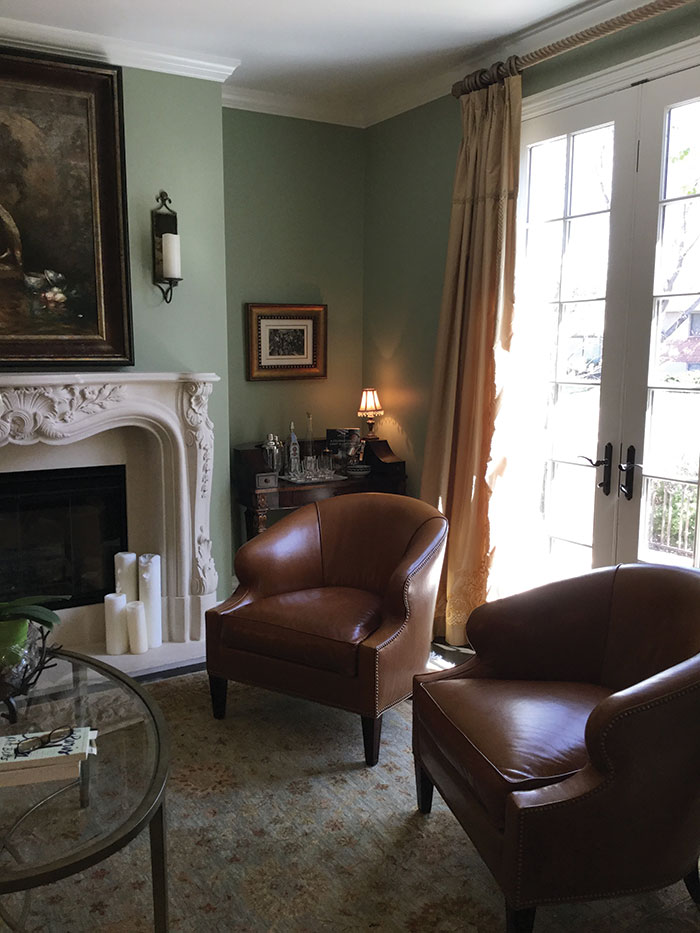 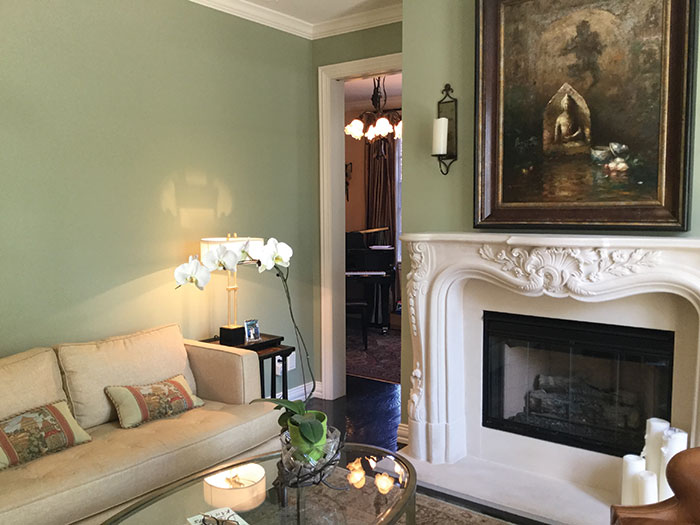 “Mainly what we did was to improve what was just a little bit off.” — Devon Tobin 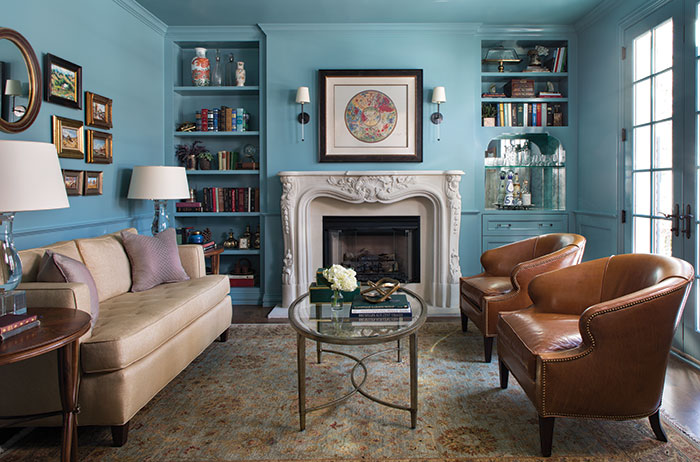 “We all love having a cocktail in the little blue room. It’s like a French salon,” says Melissa. The sconces are Camille by Visual Comfort, and the Marchand end table is by Modern History. The table lamps are E.F. Chapman Chubby Baluster Form by Visual Comfort, and the room is painted in Oval Room Blue by Farrow & Ball. The sofa is from Calico Corners, the chairs are from HW Home, and the table is from Wayfair. The painting over the fireplace is a Chagall rendering of the Paris opera house. 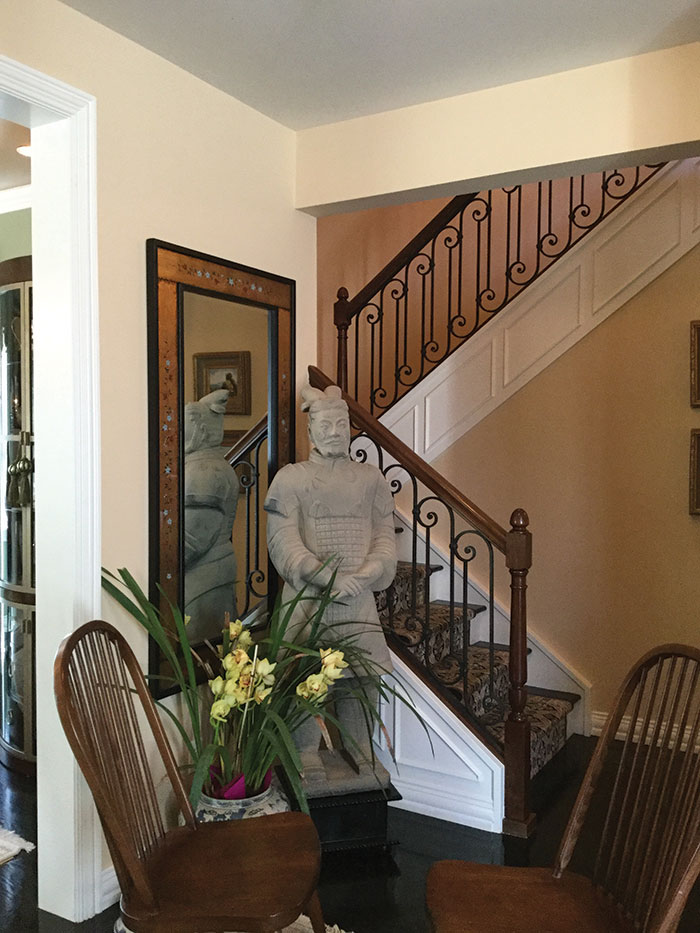 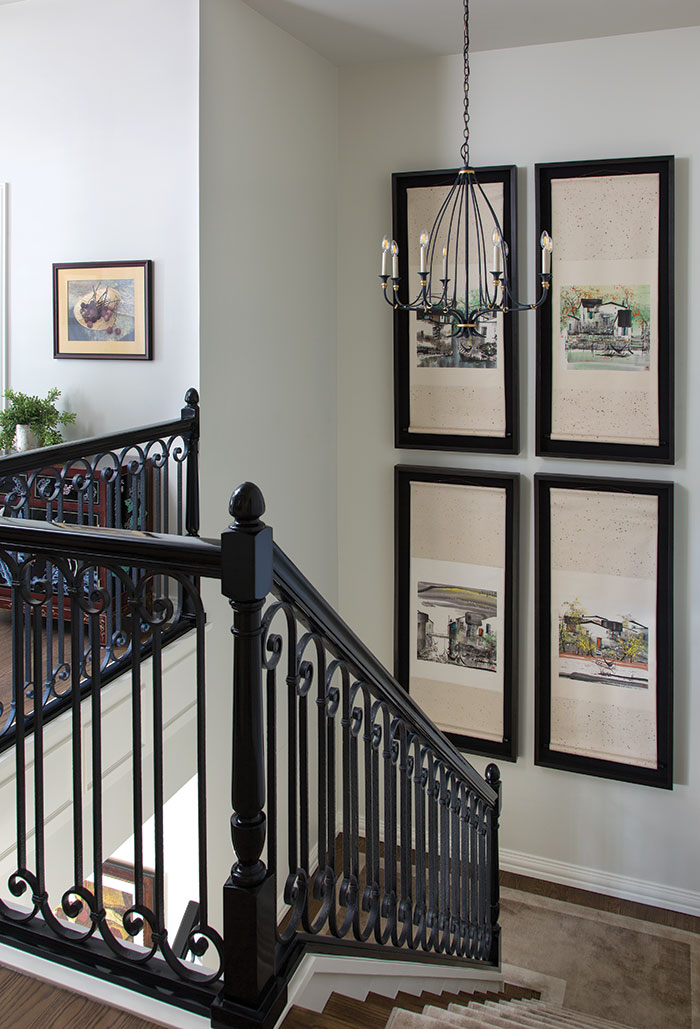 A high-gloss black lacquer finish on the railing keeps with the spirit of the high-sheen living room walls. Duet shadowboxed the Chinese scrolls for a dramatic effect.

THE MASTER BEDROOM BEFORE 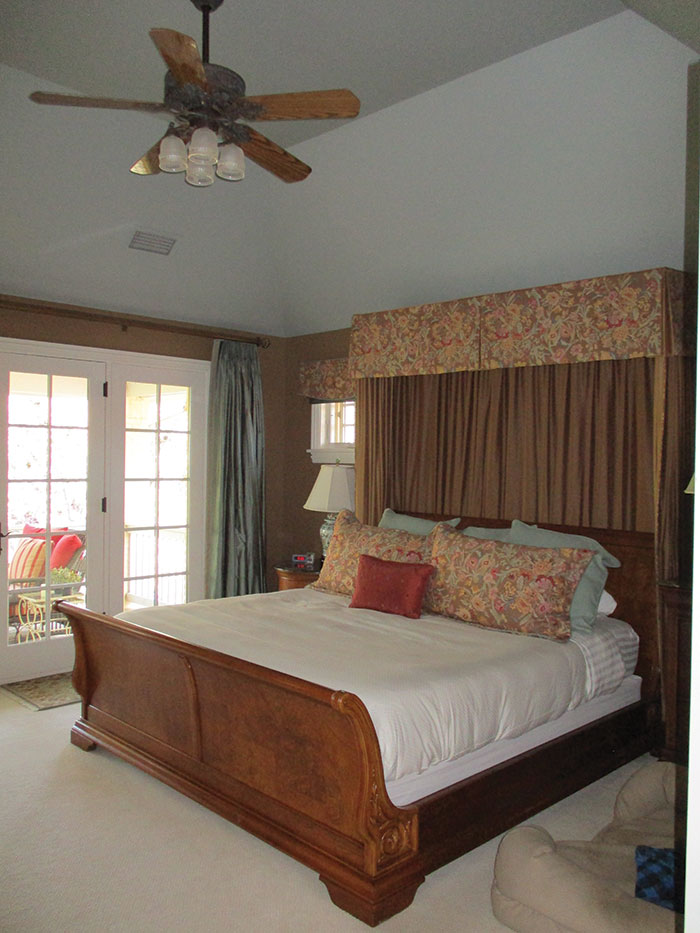 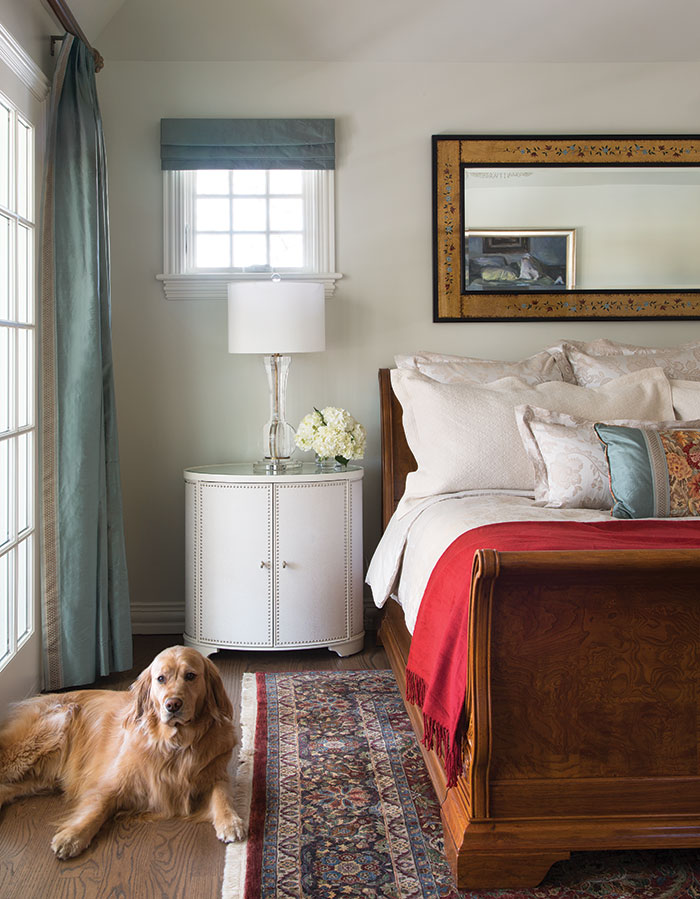 Piper the Golden Retriever rests atop new hardwood floors, which replaced carpet. Next to the cherry sleigh bed is the Oval Here, Oval There nightstand by Caracole. The table lamp is the Clarus by Currey and Company, and the bedding ensemble is by Annie Selke.

THE FAMILY ROOM BEFORE 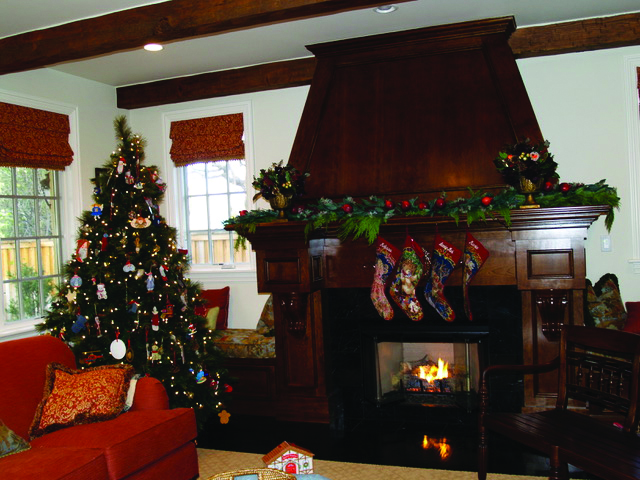 “Duet gave us traditional without the fussiness.” — Mark Manassee, Homeowner 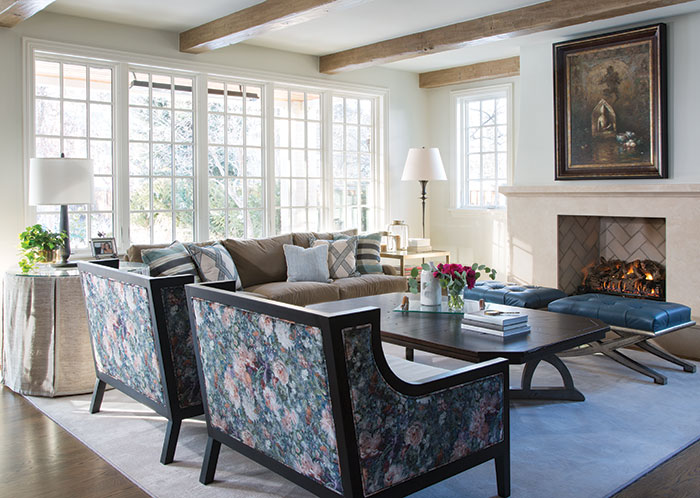 Duet Design chose an open fireplace with a marble surround to replace the previous cherry fixture. The light-filled room now features custom double-armchairs by DC Furniture Workshop; the fabric on the back and sides is Lee Jofa Royal Garden Velvet in Quartz, and the seat and inside back is Lee Industries Farrow in Pewter. A Deep River coffee table by Century Furniture sits atop a custom Antrim Burkridge silver rug by Aztec Carpet & Rug. Flanders Khaki fabric covers the Lee Industries sofa, while Garrett Leather Caressa Iris envelops the Lytton ottomans by Vanguard Furniture. 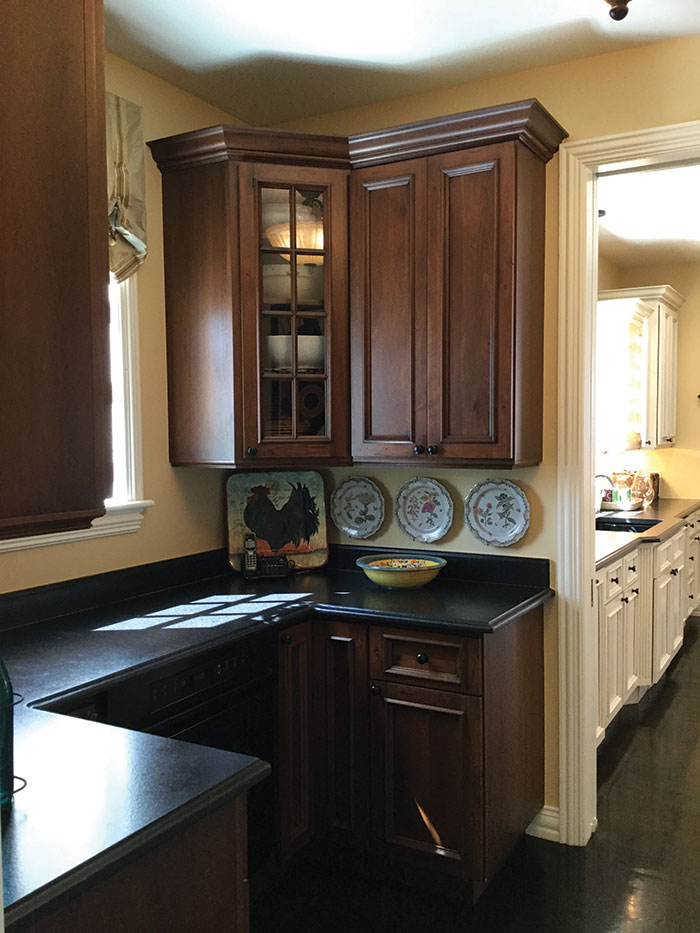 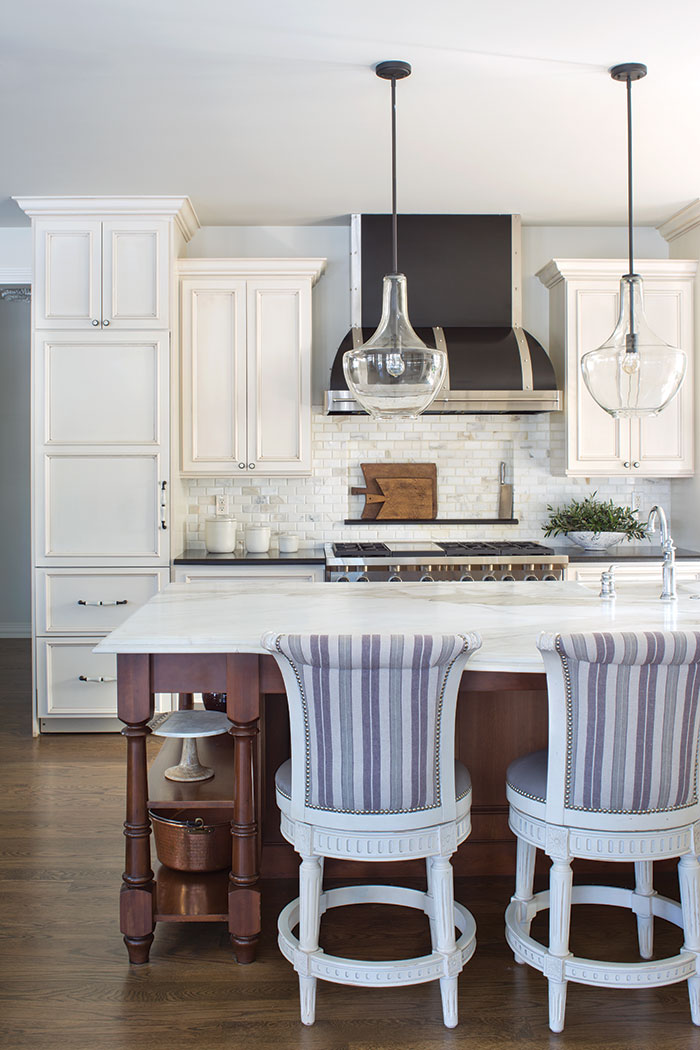 The Manassees’ existing Frontgate bar stools were reupholstered in Caramel Amethyst by Mark Alexander, and the seat of the stool is Mojave in Pewter by Designers Guild. The hanging pendants are from Wayfair, and the countertop is honed marble. A backsplash of marble subway tile lightens the feel of the room.

THE DINING ROOM BEFORE 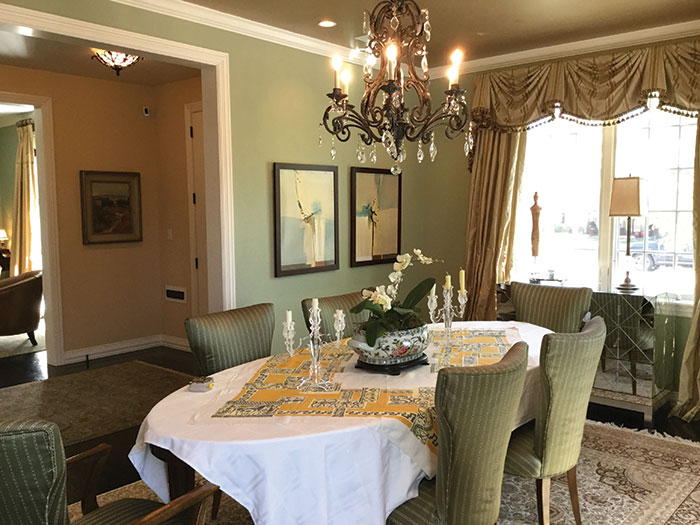 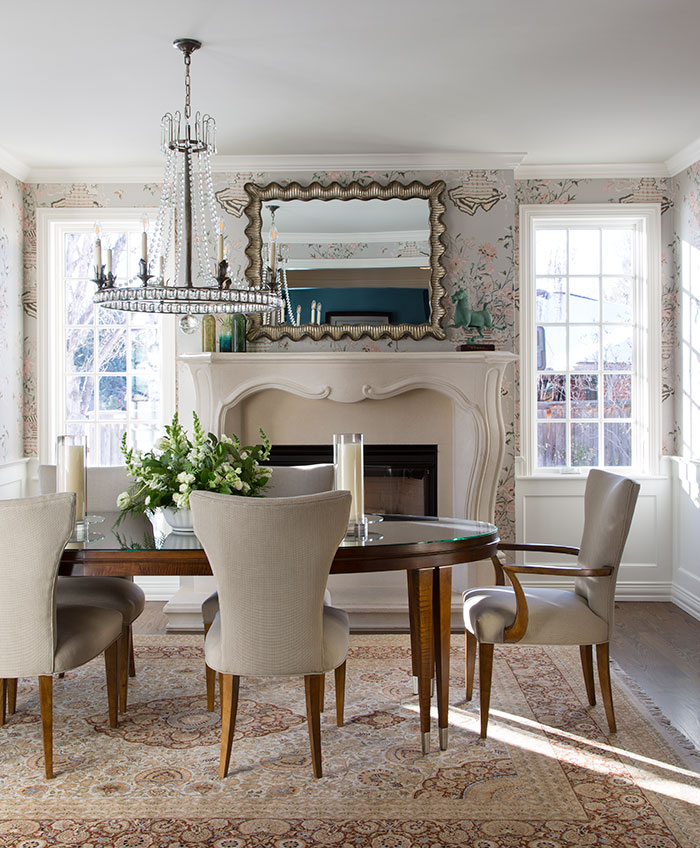 Duet Design removed the window treatments to introduce a more modern feel and highlight the original woodwork around the windows. Also new: the classy Regency Large Chandelier by Visual Comfort, which hangs over a Century Furniture table from the Denver Design District.

1. A second set of Double French Doors was added to the breakfast nook to provide a seamless interplay between the eating area and the backyard, similar to what the Manassees saw in the south of France.

2. The lobby of their favorite hotel, Le Pavillon de la Reine in Paris, inspired The Formal Living Room. Both are enveloping and sexy and bold in colors and pattern.

3. The Blue-Velvet Side Chairs in the dining room look like they belong in a Parisian salon. Duet figured out how to create a formal dining room that isn’t uptight.

4. The Floral Patterns in the Family Room reminded the couple of similar styles they saw all over Paris. The blue-leather stools allow a group to gather for conversation.

5. The Light-Wood Beams on the family-room ceiling are very French country—rustic and warm but refined. They also help delineate the space from the kitchen.

6. Duet moved a Mirrored Dresser from the old dining room and put it in the master bedroom. It adds unexpected glamour.

7. There is a certain European Elegance to the house, from the lush, shiny stair-runner to the silk floral rugs to the dramatic chandeliers in the dining room and master bedroom.

8. Duet was able to showcase the Manassees’ art—sometimes by reframing pieces to infuse new life. Highlights include the Chagall rendering, Chinese scrolls and a Venetian mask. The art is now a wonderful representation of what the Manassees value and adore.