In her real-life “silver linings playbook,” artist Danae Falliers actually thanks the 2008 recession. “My teaching job [at the University of New Mexico] was dead in the water because my grant money ran out,” says Falliers. “It forced me into what I really wanted to do, which was to develop my studio practice and devote myself full time to photography.” Fortunately, she adds with a laugh, “it kind of worked out.”

Today, Falliers is a conceptual photographer living and working in Denver and Santa Fe, New Mexico, exploring the country with her digital camera to find images that resonate in this hectic, modern life. She describes her work as “composite-based photography,” with an emphasis on exploring the boundaries between realism and abstraction.

Her digital prints are bright, colorful, large-scale visions of the perceived landscape, whether it’s a shelf of books from Georgia O’Keeffe’s library or a semi truck racing down the interstate. Falliers uses multiple shots to create her final image. The result is a coexistence of movement and stillness. “It’s something you have to see to really understand,” she says. 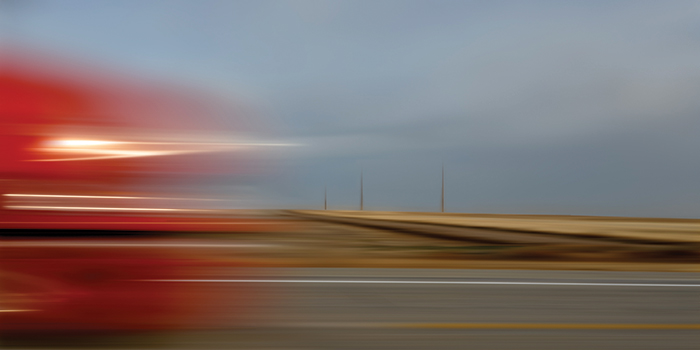 Raised in central Denver a few blocks from George Washington High School, Falliers decided to attend art school in Northern California, with a full scholarship in drawing. (Her mother and father, both of Greek heritage and heavily involved in the Denver art scene, were naturally all in.) But she switched to photography midway through college. “I found that I liked the immediacy of developing film in the darkroom,” she explains. “It was fun being out in the world instead of being in the studio. And I loved the precision of photography.”

Falliers went on to grad school at the University of Southern California, earning an MFA in photography, when her artistic path shifted once again. “It was the height of postmodernism in the early 1990s,” she says. “Things were going toward concept and installation and less about the single photograph as an art piece.” This new, modern world of photography brought Falliers to the elite Buckley School in Sherman Oaks, California, where she oversaw a digital program with a large budget—$50,000 for materials alone. There, she bought an early Mac and embraced digital photography with her students, among them Kim Kardashian, Rashida Jones and Sam Farrar.

Falliers’ career path then progressed to Santa Fe, where she navigated the shift to teaching at the university level. But then the stock market crashed, and she lost her job. “I had been teaching digital for so long, but at the time I had never seen any digital photography that I really responded to as artwork,” she says. “So I set the challenge: What could I do with my love of photography, design and color to find something intellectual, emotional and romantic that has a little bit of punch, that people have a connection to?”

To achieve her answer, Falliers developed a multistep process. “I grab fragments to put in the base frame,” she says. “Then I build on top of the base landscape with different photos and assemble them. That’s the essence.” 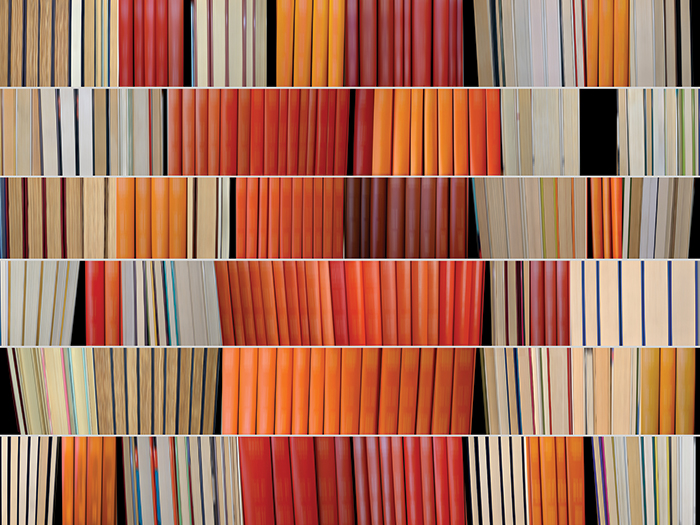 “Libraries are becoming an extinct form, but we all have a recollection of them. My pieces are almost a placeholder.”   — Danae Falliers

Her Library and Prairie series seem to resonate most. “Libraries are becoming an extinct form, but we all have a recollection of them,” she says. “My pieces are almost a placeholder.” Her Prairie interpretations were sparked by the Obama/Clinton primaries, a time that prompted Falliers to focus her lens on America’s changing landscape. “I flew to Kansas, rented a car and drove out to the plains to think about what encapsulates the romance of America,” she says. “I found that as cities are becoming more and more congested, these landscapes offer a place of rest, a place of calm. It’s all about stopping and looking.”

Today, Falliers splits her work time between a calm, peaceful studio in Santa Fe and a downtown Denver space at 28th and Blake in RiNo, where she assembles her pieces digitally on her computer before sending the images to master printers for placement on rag paper or aluminum. The photographs, sold through Goodwin Fine Art in Denver, range from $2,100 to $4,800 and vary in size.

Whether it be the plains, seascapes, overpasses or a flurry of books, Falliers has found a gratifying career creating moving still lifes that capture the essence of whatever landscape speaks to her in the moment. “It never gets old,” she says of her use of photography as a malleable medium. “I do love the single photograph, but it’s just not how I work.”