A Yard With a House to Match

A traditional four-bedroom, two-story house—typical, kind of boxy. That was this Cherry Hills Village home when the owners and their 8-month-old daughter moved in in 1997. “The house was sort of okay,” says the wife, “but we bought it because we loved the property,” a 0.62-acre lot at the end of a cul-de-sac that abuts parkland, a walking trail, and Little Dry Creek.

Over the years, the couple—he owns an energy-efficiency consulting firm, and she is now the busy mom of three—knew they wanted to upgrade. “Part of the goal was to create enough space and have enough going on here so that the kids and their friends would want to spend time here,” says the wife. Their first few meetings with architects didn’t go well. “They offered us basically the same house with a few walls knocked down and some resurfacing, but nothing that gave us everything that we wanted,” she says. They looked around at other places, but “we just really liked where we were,” she says.

Enter architect/designer/jack-of-all-trades Stephen Hentschel of Hentschel Designs. “Stephen is the opposite of ‘I’ll just move a wall.’ He is truly creative,” says the wife. Hentschel doubled the original 2,200 square feet, designing a dream home that finally matched the dream location. “It was like moving into a brand-new house,” she says. “We ended up with everything we wanted: an office for my husband, an exercise room/dance studio in the basement, an extra bathroom and bedroom for my son, a guest room, a billiard room, an expanded master bedroom, and a three-car garage. Oh, and a pool.”

“It was like moving into a brand-new house. We ended up with everything we wanted.” — Homeowner

Will this house continue to be the perfect fit as they move into their sixties? The wife laughs: “Well, I have three more years with my youngest here, and my husband really loves this house. And he doesn’t move around. This is his second house. He’s had one job. He’s had probably four or five cars in his life. The joke is that I would have to drag him out of this house if we’re ever going to leave." 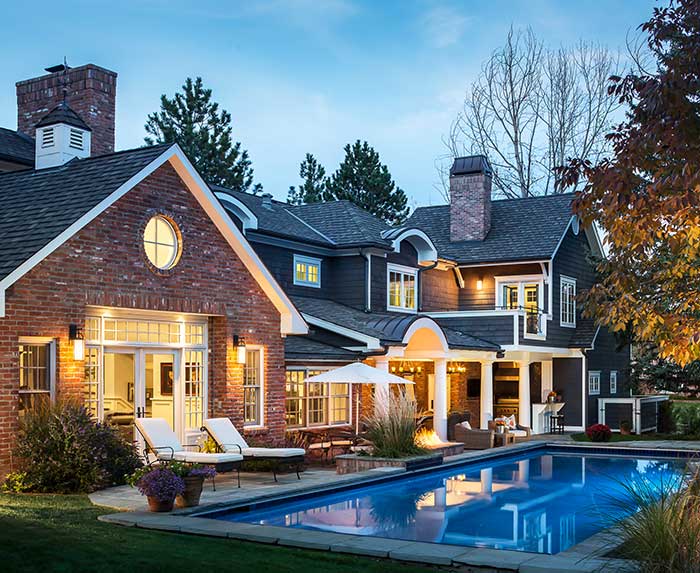 With its charcoal-stained cedar shakes and classic white trim, the house’s exterior is a bit English Country and a bit coastal. The pool? “Totally an afterthought,” laughs the wife. “The house was up and we said, ‘Maybe we should add a pool.’ The kids love it, and their friends are always here, and that was part of the goal of the remodel: to make this a place our kids would enjoy spending time as they grew up.” 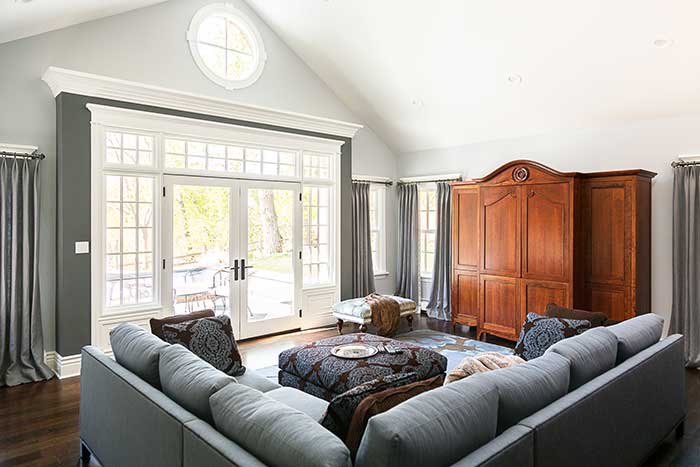 The family room, added 15 years ago, was part of the house that was preserved when “we basically whacked off half the building,” says Hentschel. Charcoal-gray accents were added to highlight the new molding, and floors were laid to match the rest of the remodel. The room was freshened up with a new area rug from Artisan Rug Gallery and drapes. The armoire was custom made by George Honeyman (Honeyman Millworks), who also built the bed and side tables for the master bedroom. 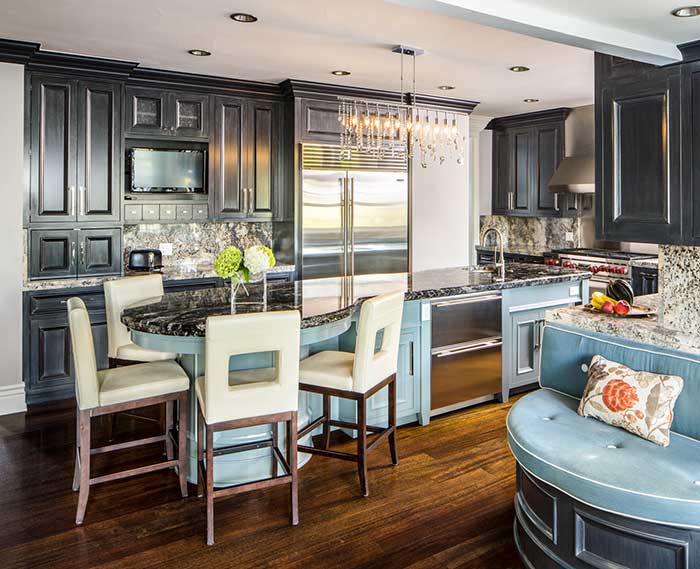 The kitchen, with its peaceful blues and elegant charcoal cabinets and its subtle silver glaze, was the most stressful part of the remodel for the wife. “We had to work within the existing footprint,” she says, “so it was challenging to tuck things in, and I looked at so many cabinets and paint colors. We ended up with something very simple and very clean. I love my kitchen—but it took a long time to get there.” 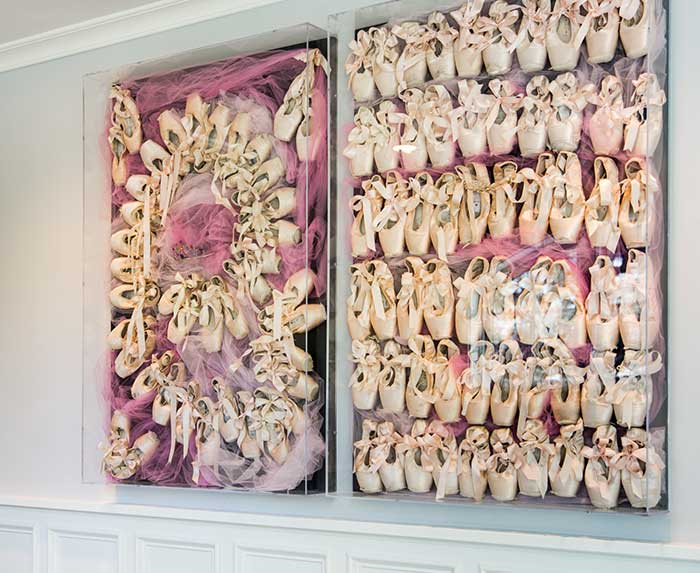 When Hentschel says he does a little bit of everything, he means it. The ballet shoe art was his idea. The wife “saved all of her daughters’ pointe shoes and had them in plastic storage bins,” he recalls. “I can’t remember how many shoes there were—I think about 200 pairs. We had special plexiglass frames built for them, and I remember sitting there during the Academy Awards, and through the entire show I was ironing the ribbons out so I could retie the bows after they were mounted.” 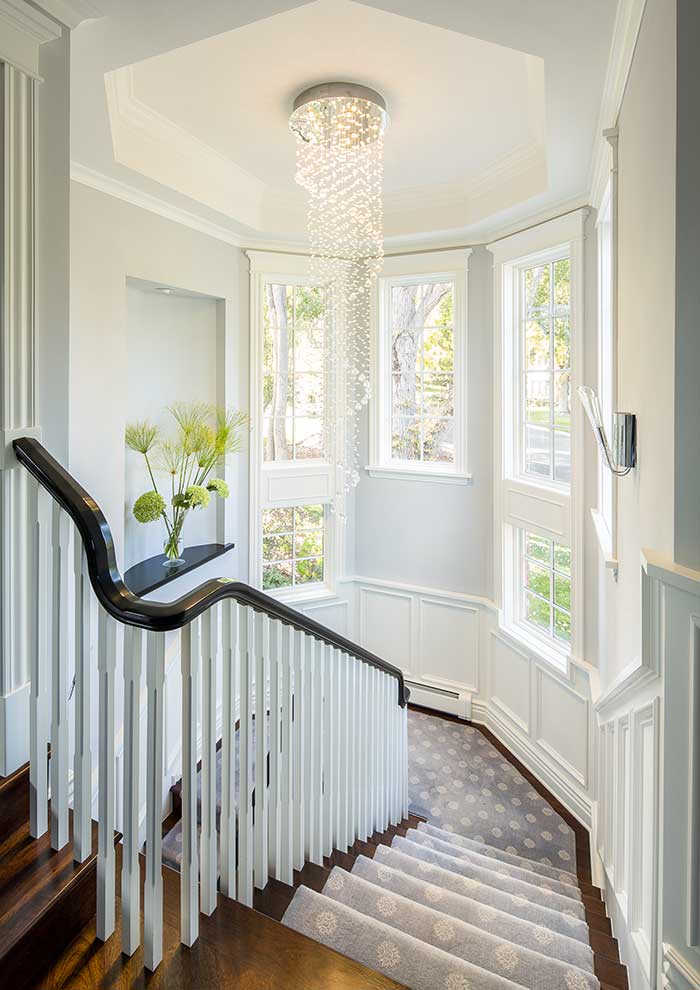 “A glamour space, no doubt,” says Hentschel. The hexagonal stairwell winds all the way from basement to second floor, beaming sunlight through the house by day. And by night, the Crystal LED chandelier from Image Complete Lighting steals the show. “Stephen and I picked it out,” says the wife. “I really liked it, but I was nervous. It was a very traditional house, and the chandelier is so modern; I thought it was really pushing the envelope. But we went with it, and I can’t imagine anything else there.”