Influenced by the movie "North by Northwest," this cozy abode turns heads 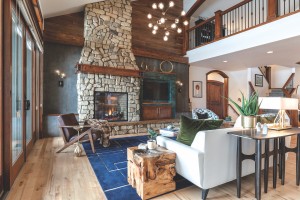 Gold rings from Uttermost adorn the mantle above the TV. An angled armchair from Target delivers sleek style with a walnut wood finish. The cozy ambience is curated through warm wood tones paired with cool accents throughout the interiors. | Photography by Kathy Peden

In the classic Alfred Hitchcock film “North by Northwest,” a New York City advertising executive is mistaken for a government agent. The 1959 American spy thriller culminates near Mount Rushmore at the villain Phillip Vandamm’s house. Although the architecturally modern home was merely an elaborate film set, Kellie Sponberg was sold on making her Windsor home a real-life design replica. “I could picture it in my head—a character strolling through my living room with a martini in hand,” she says. 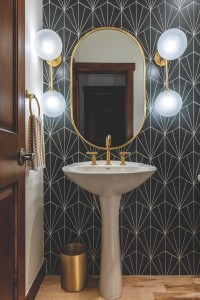 In the kitchen, a geometric patterned tile with gold accents spruces up the walls. “I was nervous at first glance of the tile selections,” says Sponberg, “but I quickly saw the vision.”

Having grown up near Fort Collins, the homeowner and her family adore their property in Windsor, but their house had seen a lot of life over the 17 years they resided there. Sponberg was more than ready for a change in her interiors. Despite her pursuit of a massive design change, she decided to keep the updates purely cosmetic. The challenge of emulating her specific vision without architecturally altering the home intrigued interior designer Meredith Parrish, owner of Meredith Parrish Design. With trust and a clear concept, the interiors underwent an extreme transformation. 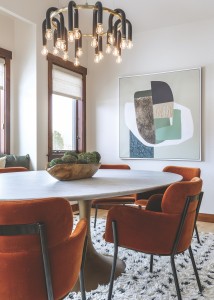 A Mitzi chandelier in aged brass and black hangs above the dining room table. “I love how the fixture feels unique in an elevated way,” says Sponberg.

Parrish explains, “I knew right away that I wanted to juxtapose some Midcentury Modern elements with the built-in stone” found throughout the home. The living room fireplace and kitchen backing walls—as well as much of the exterior—were constructed of rock from a quarry outside of Fort Collins. Parrish suggested a green tile from Bedrosians Tile & Stone to add contrast, but Sponberg wasn’t initially sold on the idea. “I was nervous it was too outlandish, but I was in for a penny, in for a pound. And that leap of faith paid off,” she says.

Parrish’s mixing of Mountain Modern with Midcentury Modern shines in the living room textures. Smooth walnut paneling was added to the fireplace as a faux finish. Adorned with a gray tile, the wall almost appears to be concrete. Two woodblock end tables from Mitchell Gold + Bob Williams introduce an organic element in support of the paneling. 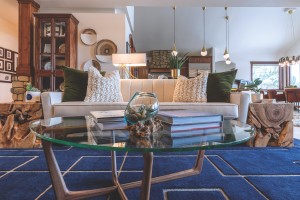 An antique brass drink table from West Elm is seemingly plucked from the Hitchcock film. Each article of furniture contrasts with the surroundings, creating a bold yet elevated feel. “This home proves that you don’t have to gut a house to see a significant difference,” says Parrish. 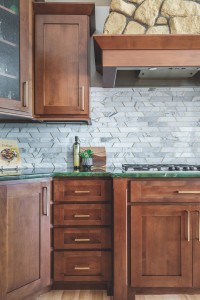 The tile along the bathroom wall offers a moody yet elegant vibe.

Sponberg couldn’t bear to part with the existing green countertops or wood cabinetry in the kitchen. To make significant modifications without altering two key elements, the designer selected an out-of-the-ordinary tile with white marble and gold accents. Alongside the tile, says Parrish, “the gold overhead lighting solidifies the design.” Above the dining room table hangs a Mitzi Whit chandelier with a distinctive shape and two-tone finish. “You wouldn’t find this lighting in a mountain home,” says Sponberg, “but that’s what I love about it.”

According to the owner, the design perfectly emulates Hitchcock while paying homage to the beloved film.