A Way With Words

With an eye to the past, Shawn Huckins creates paintings that speak to the present

Artist Shawn Huckins cites three people as his creative influences: 18th-century portrait painter John Singleton Copley, 1960s pop artist Ed Ruscha and someone he refers to as “the Big Kid.” The first two are apparent in his recent collections, which feature reproduced historical portraits with overlaid text, but he attributes the start of his artistic career to the latter. On a bus ride home in second grade, Huckins took the only seat available, next to the Big Kid, who was about three years his senior and twice his height.

“He was drawing anime and comic book characters in a sketchbook, and I started talking to him about it. He ripped out the first page of the book and gave it to me—it was some kind of skull guy with a big sword,” he recalls. Though Huckins admits he was “more into Looney Tunes at the time,” it was that particular sketch that sparked his interest in art. When he got home that day, he asked his mom for a sketchbook and art supplies and colored in the Big Kid’s gift. 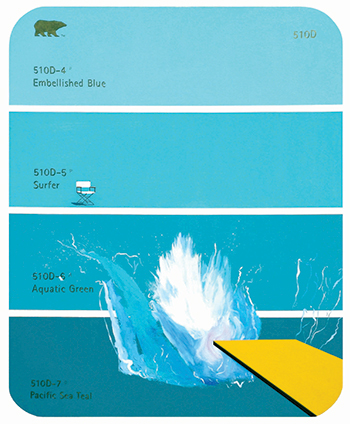 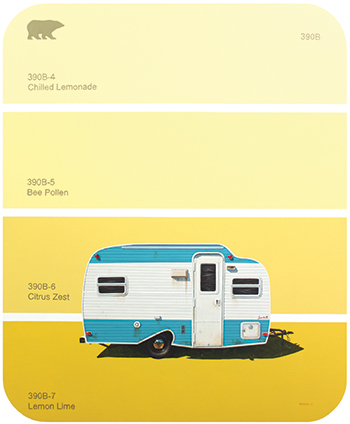 Hockney Splash and The Peeker

Over two decades, an art degree from Keene State College and countless works later, Huckins’ drawing and painting skills have improved drastically, but his basic process remains the same. The New England native begins with an existing painting or object—whether it be a paint swatch, a portrait of George Washington or an old photograph of a mountain range—and replicates or repurposes it into a piece all his own.

Much of Huckins’ work and life is rooted in history. He grew up in the Colonial state of New Hampshire, surrounded by traditional farm culture and pastoral lands, where summers consisted of blueberry picking, watching his brother tap maple trees for syrup and fixing old cars in his grandfather’s garage. Today, he translates his admiration of a bygone era to canvas in the studio, and his hobbies include playing fiddle and banjo and scouring antiques markets outside the studio.

“I consider myself an old soul,” he says. “I like the simple things in life—practicing fiddle, drinking tea on the porch—things that someone my age wouldn’t typically appreciate in my time frame.”

“I consider myself an old soul. I like the simple things in life—practicing fiddle, drinking tea on the porch—things that someone my age wouldn’t typically appreciate in my time frame.” — Shawn Huckins 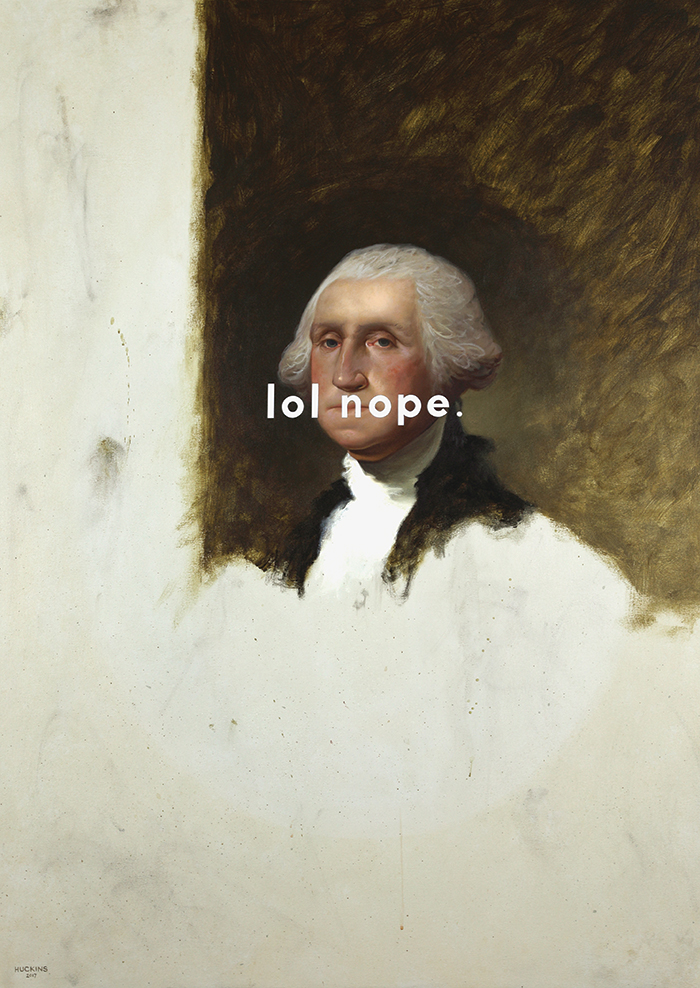 “They were terrible,” he admits. “But one of the paintings somehow got put beneath a tracing that said LOL on it in my studio. I could see the face underneath the tracing, and I thought, ‘That’s an interesting concept.’ ” 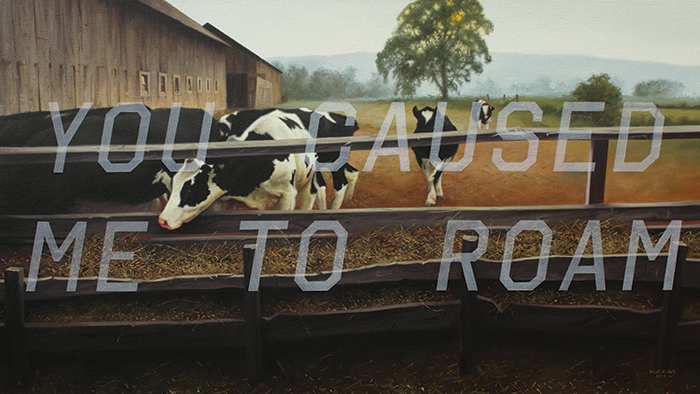 Deerfield Cows, You Caused Me to Roam

Intrigued by the juxtaposition of old-world simplicity and today’s internet antics, Huckins “trolls” Twitter and Facebook comment threads, every once in a while stumbling upon a “gold nugget of text,” he says. Huckins tapes the acronyms and snippets of text-speak onto bright-white canvas, sketches and paints the historical scene, and then strips the tape to reveal meme-like block lettering that narrates the scene behind it and “takes away the formality of the portrait,” he says.

A departure from internet slang and portraiture, the artist’s newest series, Somewhere to Nowhere, is a nostalgic glance inward. During a bout of homesickness (he relocated to Denver in 2011 with his partner, Matt), Huckins began pairing text found in antique books, on postcards and in Civil War songs with “farm scenes, pastoral scenes, Eastern landscapes—all things that remind me of home,” he says. 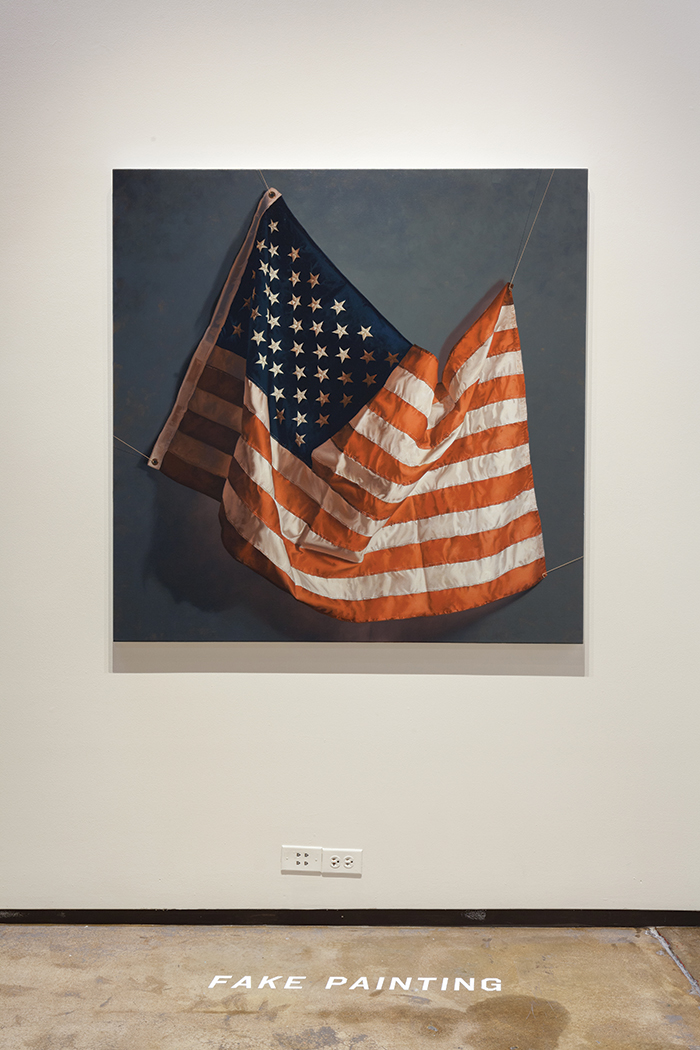 Song of the Swamp (Fake Painting)

“I want to make fun, humorous work. I’ve never been a dramatic person. I like to see people smile and laugh.” — Shawn Huckins

The collection of 18 paintings—which was on display at Goodwin Fine Art in Denver’s Golden Triangle neighborhood this summer—once again focuses on text. But instead of bold block lettering, Huckins paints faded phrases over contextual scenes to signify the dwindling of handwritten letters and intimate heart-to-hearts.

“I wanted to showcase a time before technology, before social media, when people may have had more heartwarming and personal one-on-one conversations,” he says.

Huckins’ body of work has been interpreted as a reflection on a modern, tech-obsessed society; the devolution of language; or, more recently, political satire. But his main objective is much simpler.

“I want to make fun, humorous work,” he says. “I’ve never been a dramatic person. It’s meant to be cheerful versus dark and heavy. I do it because I like to see people smile and laugh.”SaveSave