A Wash Park Victorian Restored to Its Original Glory 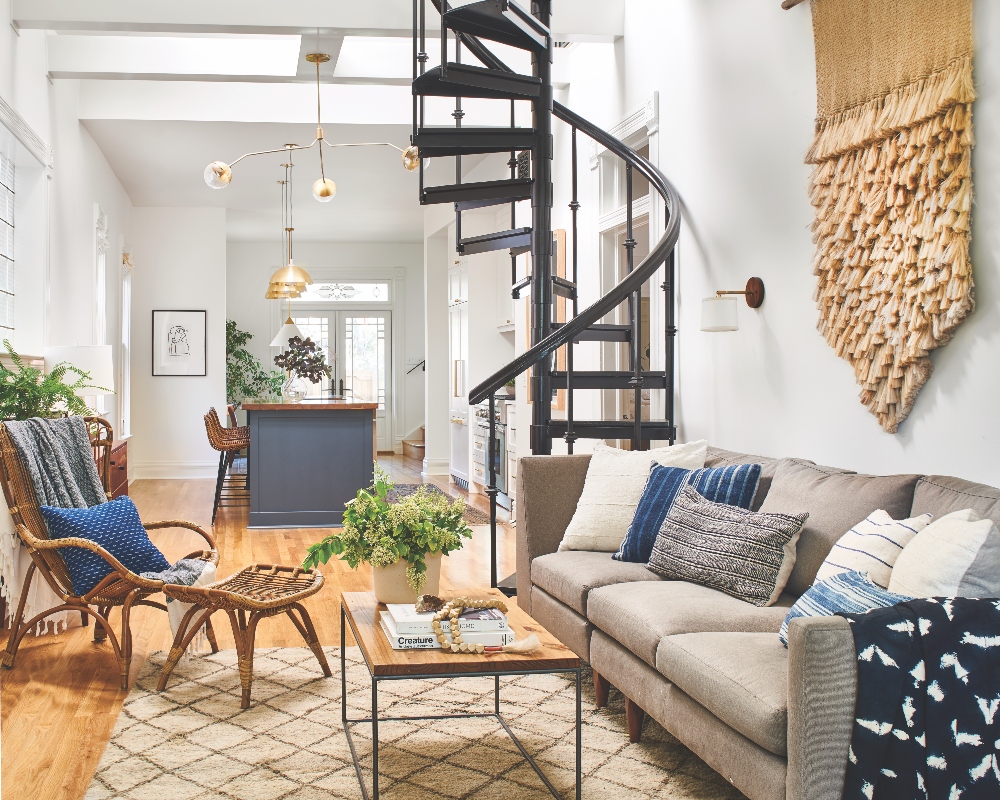 DETAIL ONE: COMMITMENT Nerves of steel. A heart of gold. Unwavering commitment. These are just a few of the qualities it takes to restore an old home to its original splendor. Fortunately, Washington Park homeowner Amy Bauer has what it takes. In spades.

DETAIL TWO: COURAGE Bauer purchased the Queen Anne after graduating from law school in 2001. She initially worked on renovations herself, installing a new spiral staircase and adding a clawfoot tub to the second-story bathroom. But those updates were followed by disappointments. “There was a little bathroom off of the bedroom, and I had painted it what I thought was a good color but it was just hideous,” Bauer says. When the shower and bath stopped working and the tiles started falling off, Bauer decided it was time for help.

DETAIL THREE: COHORTS In a stroke of fortune, she called in Anna Elyce Smith of Annabode, who had recently set up shop in Denver. Bauer and Smith shared a love for the same vintage shops—tops among them Meek in Denver—and by happy coincidence, a love for old homes. Bauer was fiercely devoted to restoring her home to its original character, and it turns out that Smith worked on historic house museums in Washington, D.C., while completing her master’s degree in History of Decorative Arts at the Smithsonian. Initially, their collaboration was limited to the bathroom and décor ideas, but Bauer later expanded the project to restoring and renovating the entire home. “I wanted to make the house more functional, but I didn’t want to sacrifice any of the character it had because of its age,” she says. After bringing on architect Kate Fields and her contractor, Craig VonderHaar, Bauer was delighted to discover the new members of the team were also just as dedicated to the restoration. 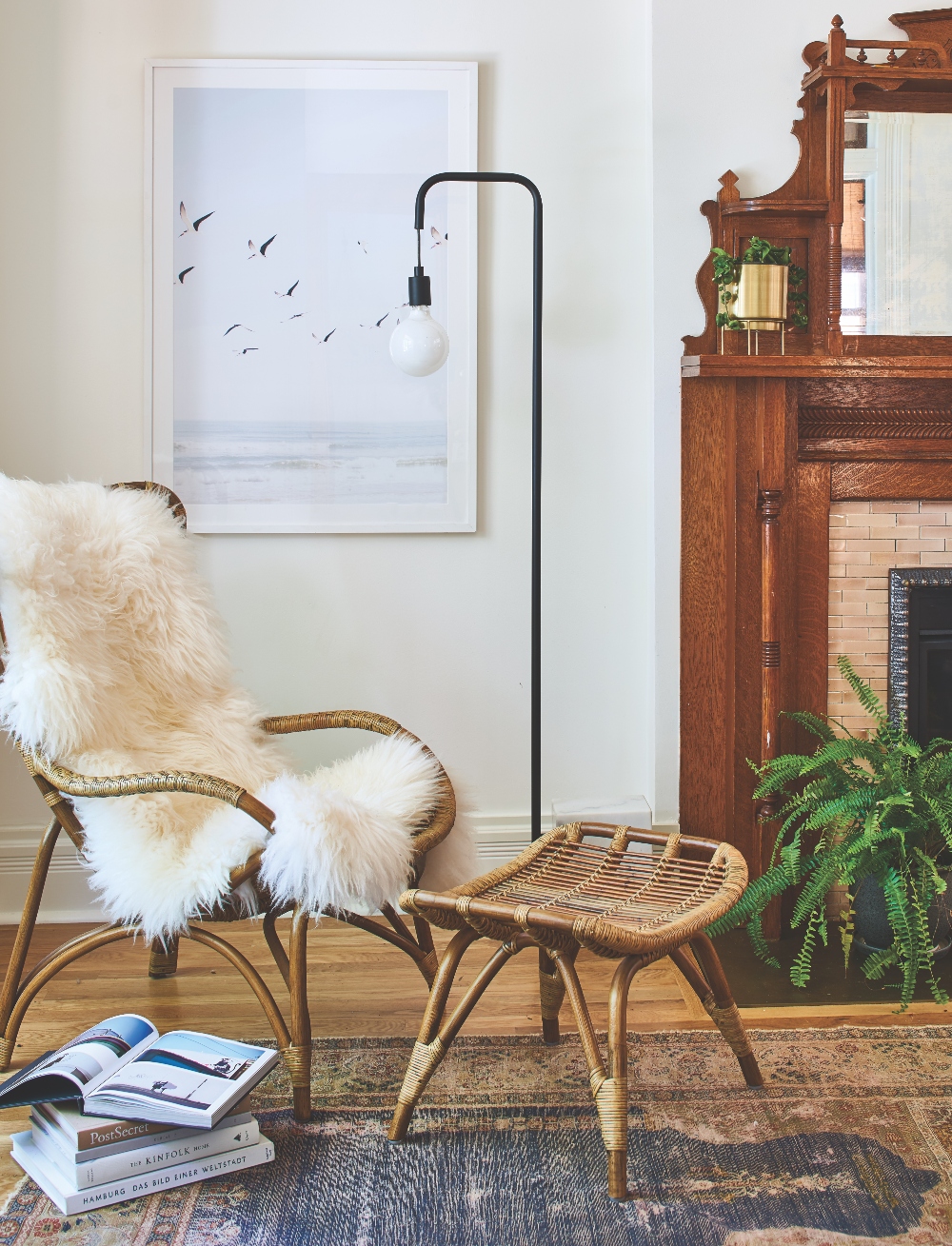 Living Room Owner Amy Bauer considered the mantle a must-keep, along with most of the other original fixtures. A Wayfair sheepskin covers a Roost rattan chair.

DETAIL FOUR: RESCUE & RECREATE The team used as much of the original structure—salvaging old doors and beams from the basement—as possible. Whenever they couldn’t, they tasked woodworkers with painstaking recreations, crafting items including support beams and fish-scale shingles for the exterior. “It broke my heart every time we had to lose something that was part of the original structure,” Bauer says. “Craig instructed crews to save every little thing. If they had to tear down a portion of the brick, he’d say ‘save these things; she’ll want them.’”

DETAIL FIVE: RESEARCH The team researched every detail. “The most fun parts of the project for me were the French doors in the dining room. I took the design of a stained-glass transom she had in the living room, and I had a stained-glass artist recreate that in clear-glass textures above the custom doors,” Smith says. “Then I designed the pattern on the windows to coordinate with the original back door that we ended up taking off the house.”

DETAIL SIX: REPLICATION The hardware to the doors existed here and there on original doors, but Smith set out to finding the rest of the doorplates, hinges and knobs on eBay. The Windsor pattern used in the home “was one of the manufacturer’s most popular patterns at the time, but it was definitely a hunt for individual pieces that survived,” Smith says, adding that Rocky Mountain Hardware provided historical replications for the rest. As for moldings that couldn’t be salvaged, VonderHaar took the casing, the rosette blocks and all that trim and had knives made at Austin Hardwoods, to ensure that the profile of all of the wood details could be duplicated, he says.

DETAIL SEVEN: LIGHT Light was important to Bauer from the start. In every instance where a window or opening would be added, the team opted for bigger sizes. For example, when they designed the dining room, they added a large dining window and French doors, and instead of a window for Bauer’s second-floor office, they added more French doors to the Juliet balcony. “We realized this room was added [to the second floor] and the obvious thing would be to put a window in, but she really wanted to maximize those views, so I suggested, ‘Why don’t we just put a door here?’” Fields says.

DETAIL EIGHT: HEART Bauer is quick to share the many stories about the love and attention the team brought when saving the historic details. But when asked what she loves most, she says the most important change of all is that it didn’t really change. “I was a little worried and wondering, ‘Will I love it as much when it’s different?’ And I do,” Bauer says. “I love how it still feels like my house.” 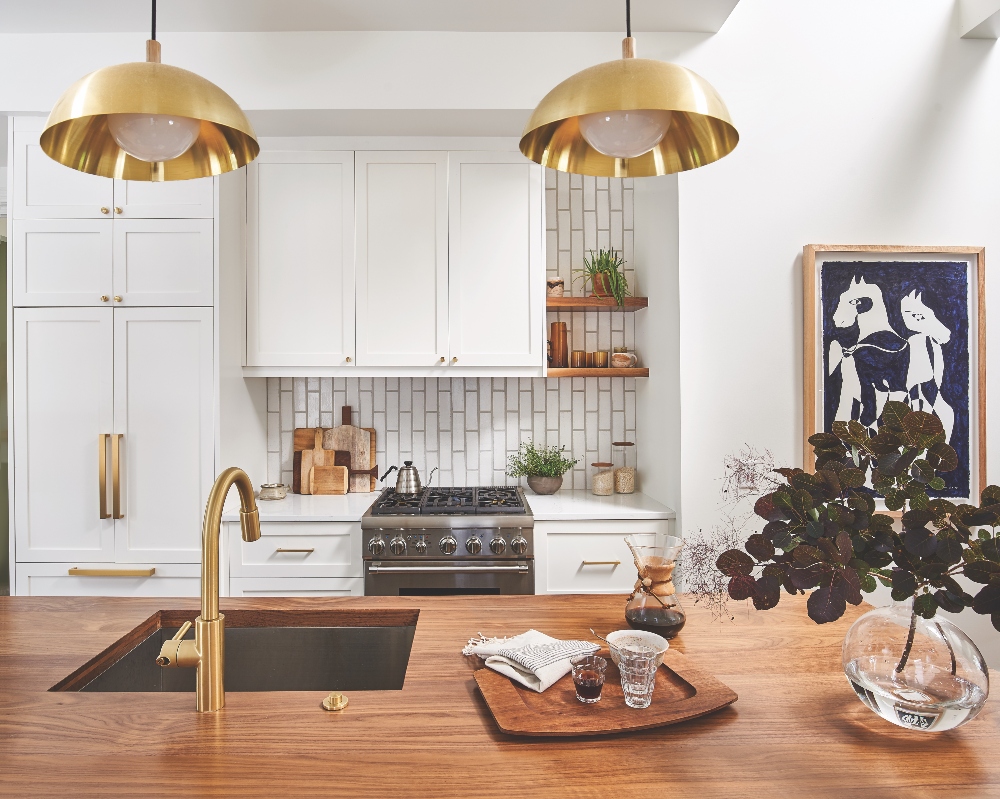 Kitchen The high-maintenance walnut countertop on the island was not without controversy. Bauer says everyone tried steering her away, yet she remains elated with her decision. The designer suggested the Fireclay Glazed Thin Brick be installed in a vertical pattern to contrast with the typical layout, already used in the downstairs bath. 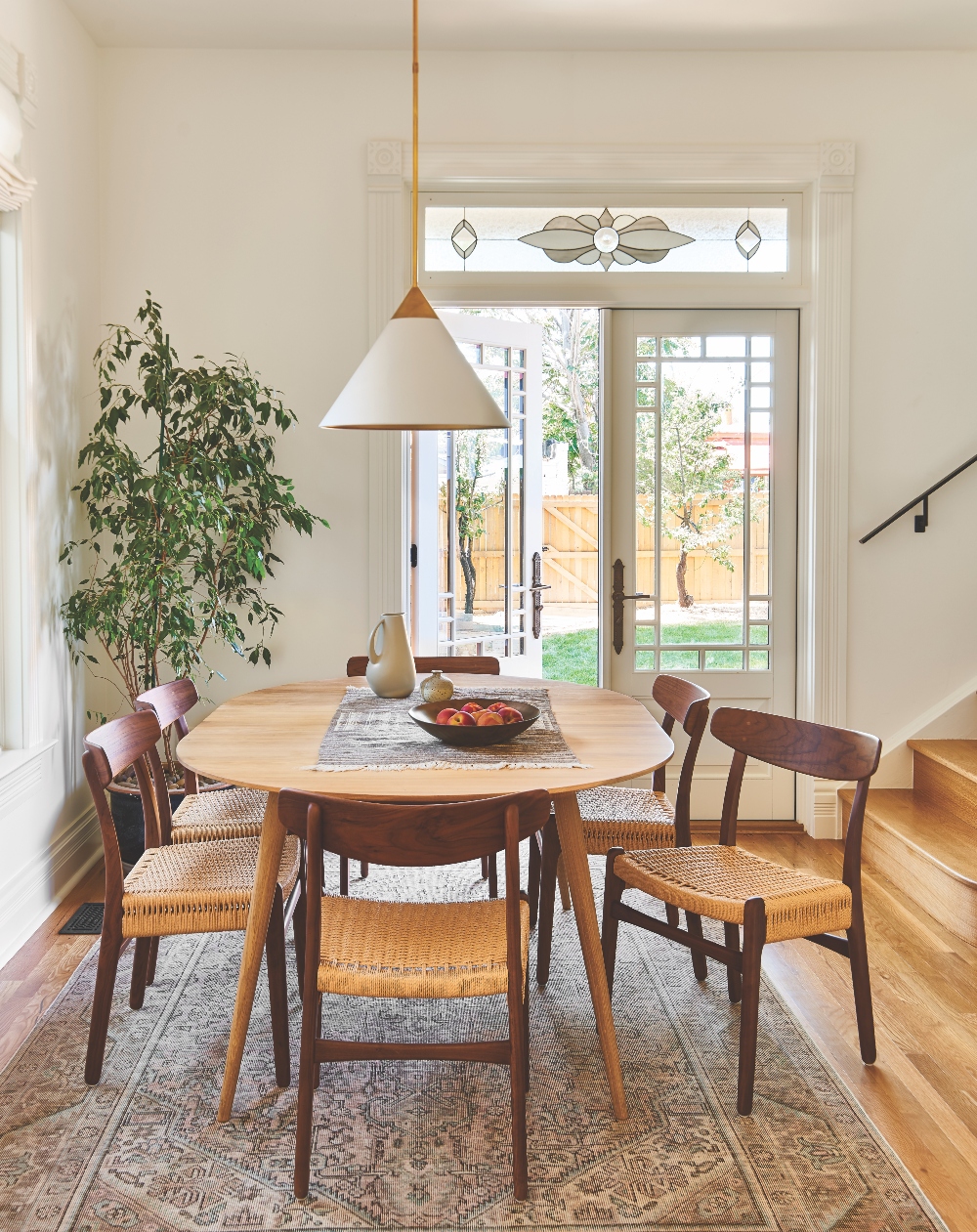 Dining Room To bring more light in, designer Anna Elyce Smith of Annabode enlarged the dining room window and designed a custom transom made by Kolbe, based on an original glass design in the home. The larger window and the French doors are both in keeping with the original Queen Anne design. She installed a Kelly Wearstler pendant above a table from Danish Design Store and found the chairs at Inmod. 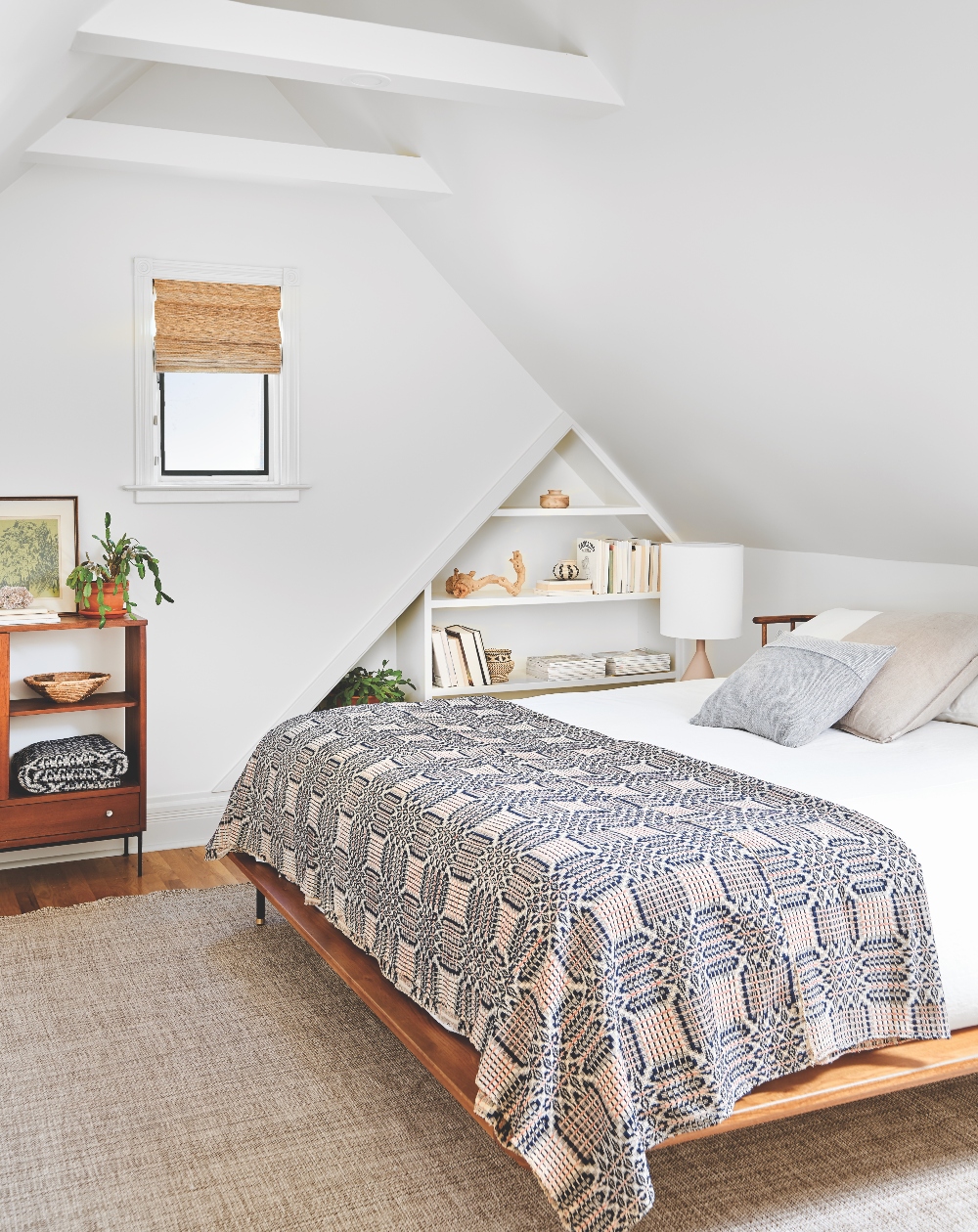 Master Bedroom A mid-1800s geometric coverlet from Meek and Anthropologie’s modern take on a spindle bed get channeled into the present with a crisp linen duvet by Rough Linen, West Elm pillows and a Dash & Albert woven rug.

Living Room “I feel like the spiral staircase is the personality of my house,” says Bauer, who installed it, along with the Triple Seven Home pendant, before hiring a design team. The contrast of bohemian with modern elements is her favorite style, so a wall-hanging from The Dharma Door and a vintage rug soften the Room & Board sofa and Grain & Knot table. 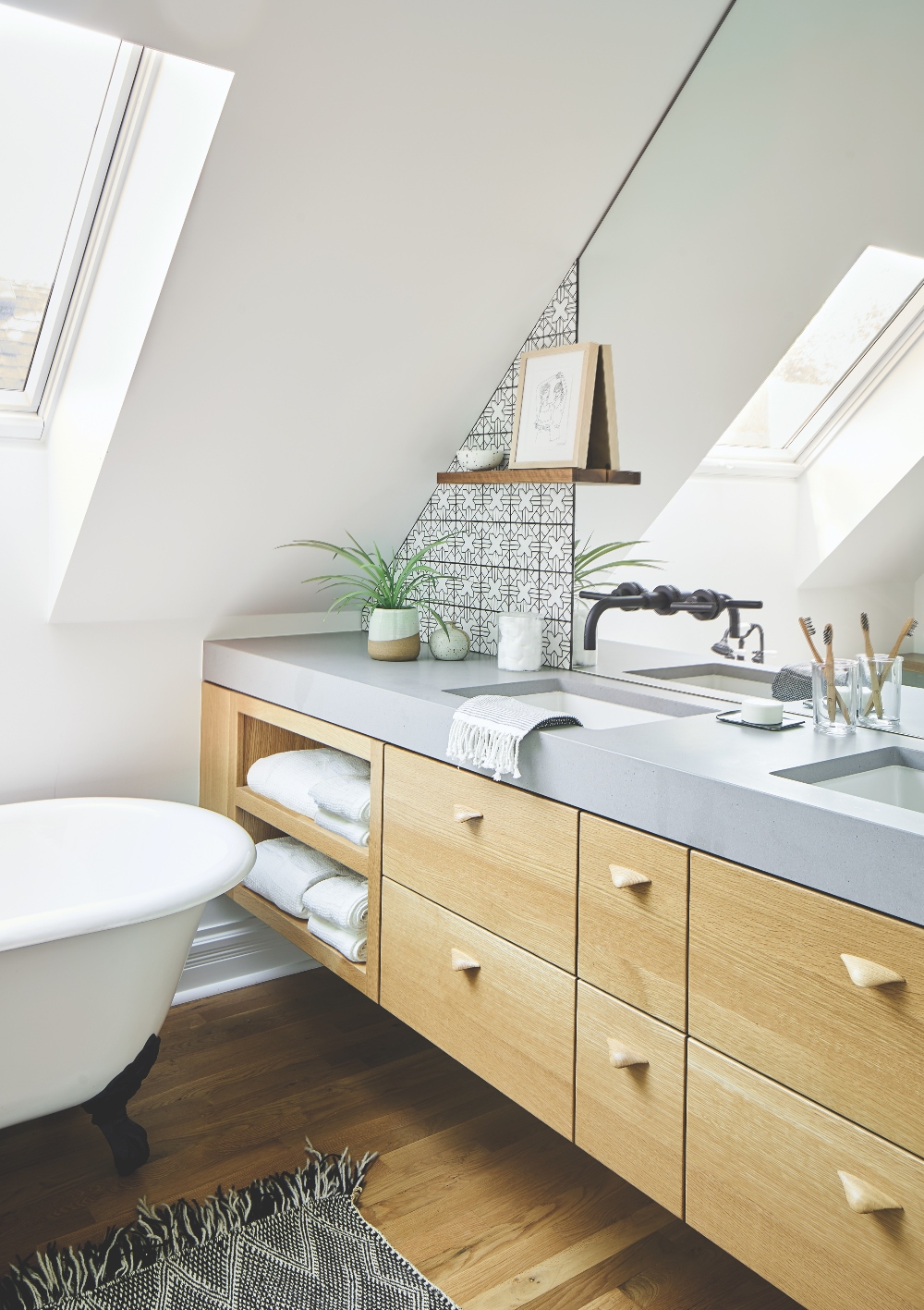 Upstairs Bath Shortly after moving into the home, Bauer had the claw-foot tub craned into the second-story bath as part of her first round of updates. Smith lightened the room by adding a glass shower and hanging a wall-to-wall mirror above a custom rift-sawn white oak vanity crafted by Dennis Simpson of Golden Rule Construction. The backsplash tile is hand-painted Kasbah Trellis tile by Fireclay. 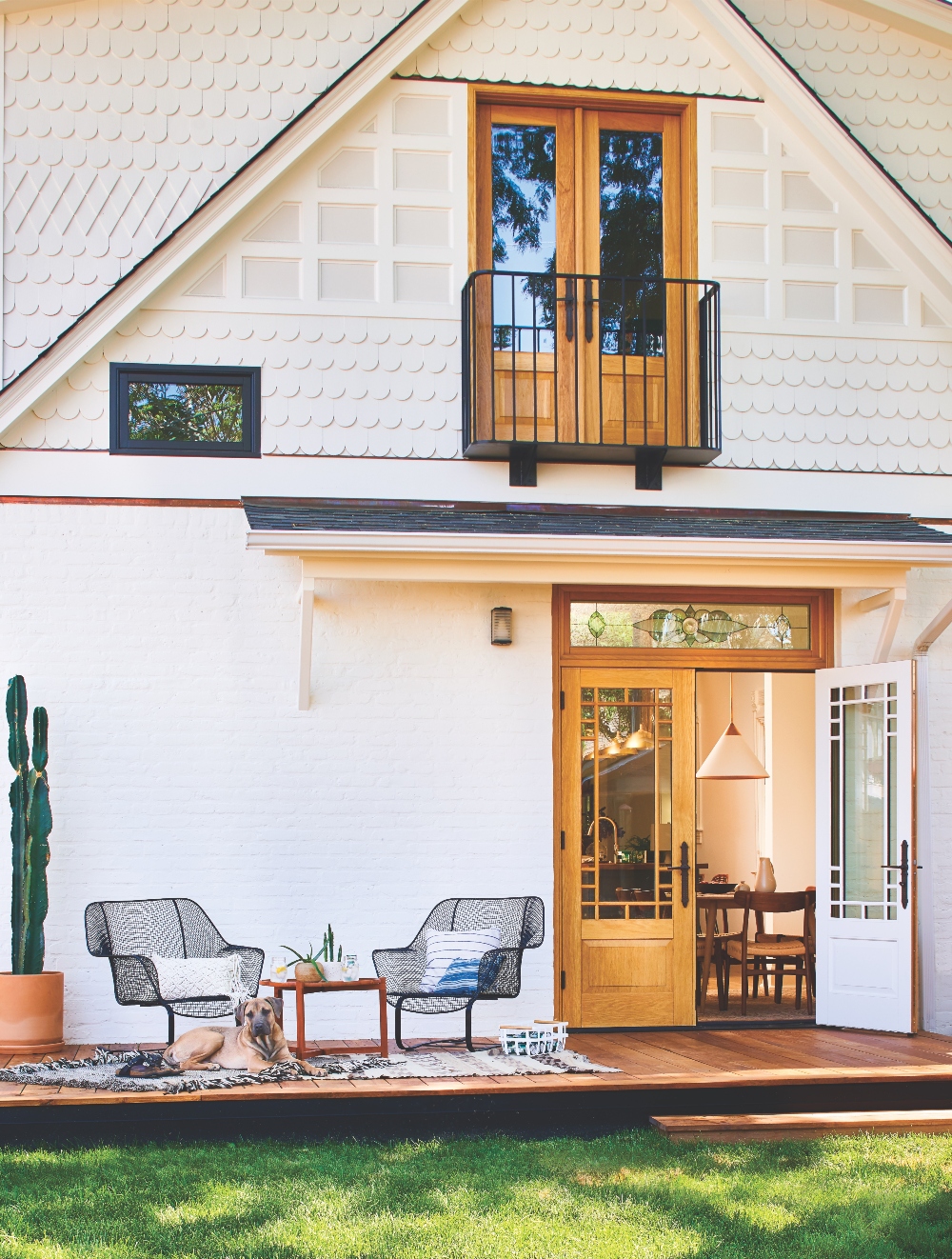 Back Exterior “It was really important to keep the exterior seamless,” Smith says. “The bricklayer even laid the bricks as they would have when they originally built the home.” The contractor ensured that the scallops and diamond detailing on the back match the front of the home. The Woodard chairs are from Meek, and the rugs are from Modern Nomad.