A Tasteful Home in Carbondale Stands Out by Blending In

This new build is heavenly 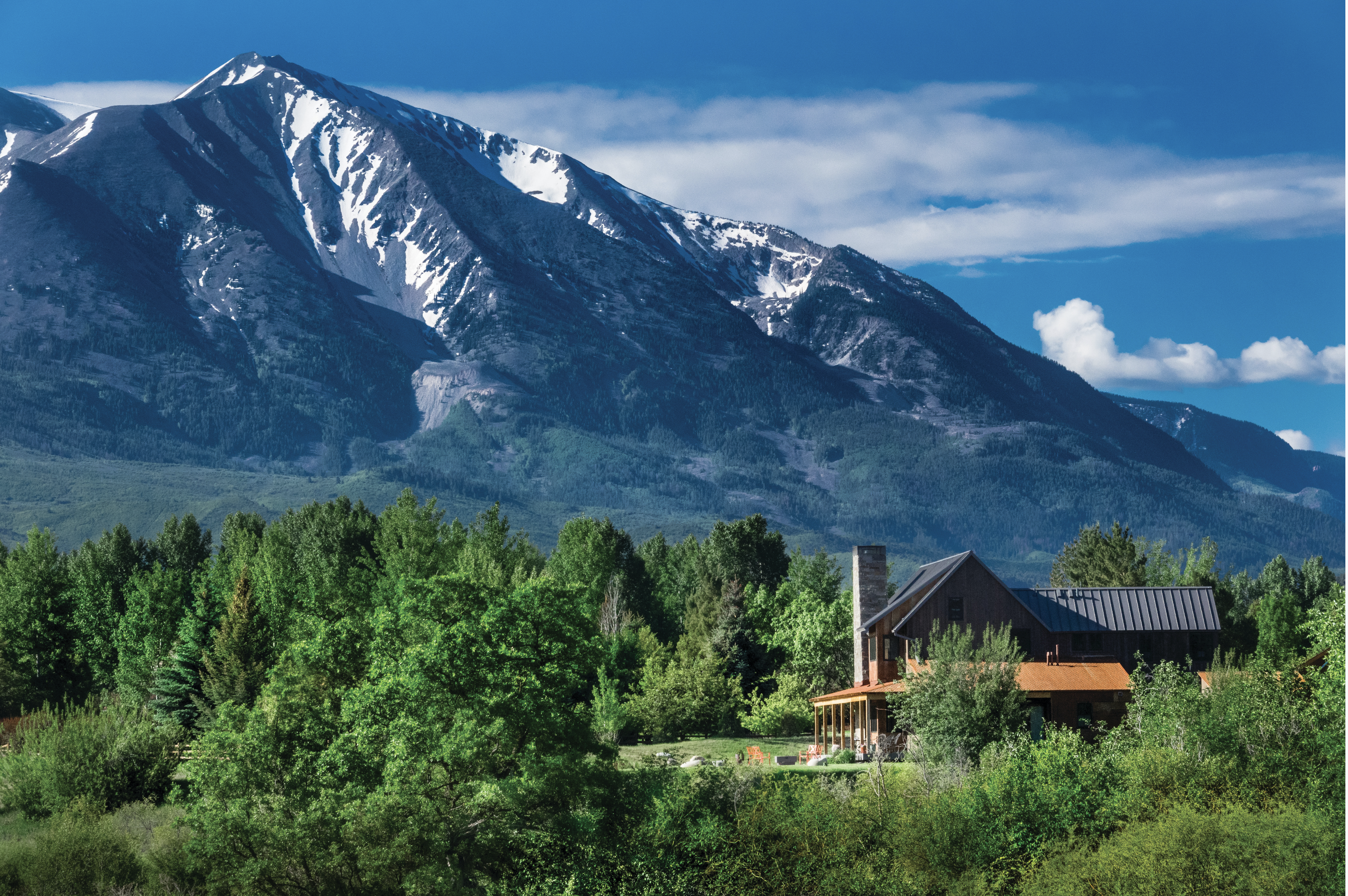 Exterior “The lot had views of the Crystal River and Mt. Sopris, and we just fell in love with it,” homeowner Bruce Warren says. Additionally, there are views to the dramatic iron-red cliffs of Red Hill to the north. Thanks to exterior insulation, a super-insulated roof, solar panels and an energy-recovery ventilation system, the house is a model of energy efficiency. Photography by Greg Watts.

To kick-start the design process for a property in Carbondale’s River Valley Ranch, architect Harry Teague began as he always does: He walked, he analyzed, and thanks to more than a few decades of experience, he ultimately placed the house precisely where it belonged.

The ensuing structure—with its strong, vertical projection framing views of Mt. Sopris and a covered porch stretched along the east side that parallels the Crystal River—is perfectly in sync with its environment. 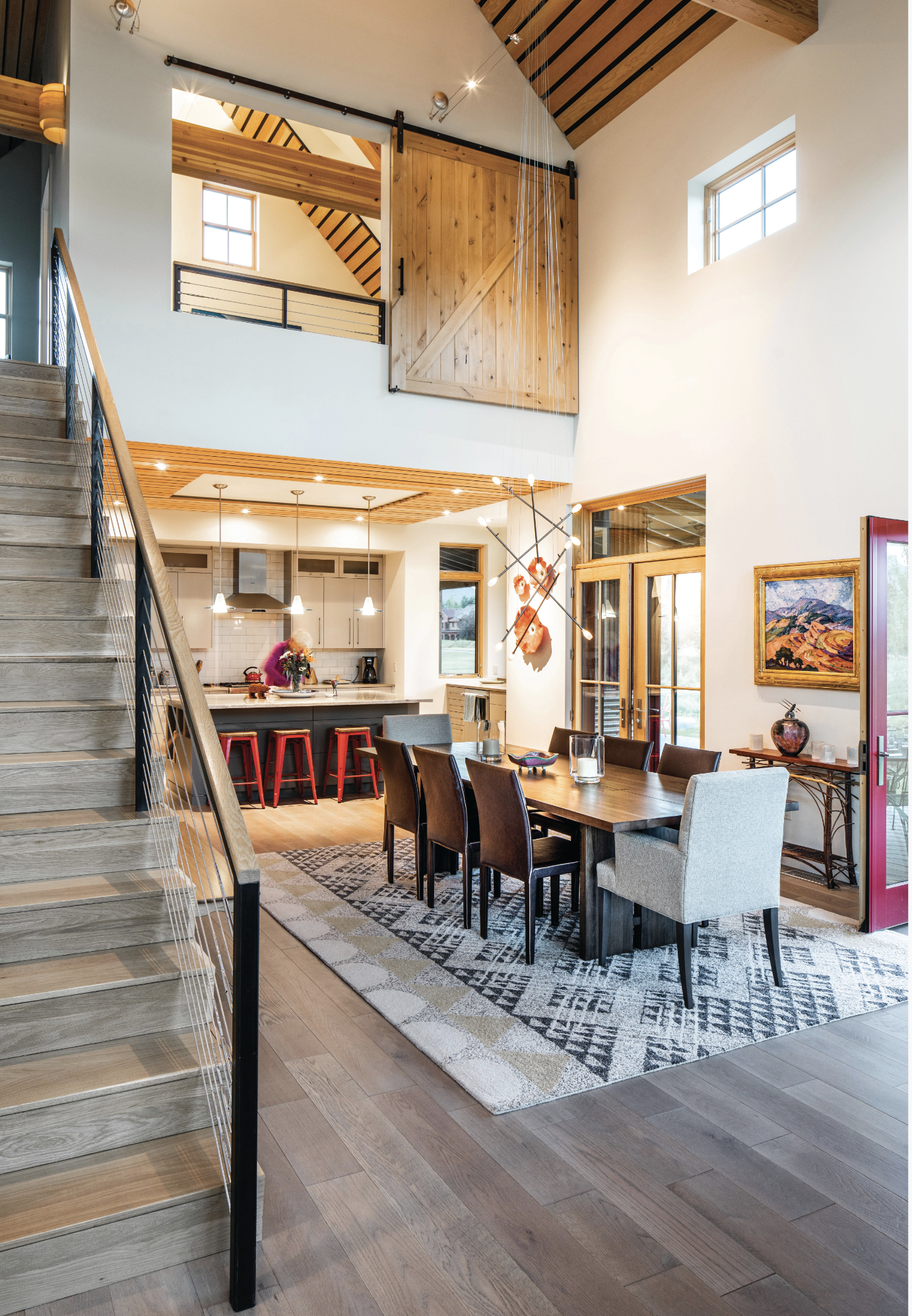 Kitchen and Dining Room Steve Sapp of Country Woodworks made all the kitchen cabinets. The pendant lights are from Lowe’s, and the bar stools were a Wayfair find. Over the dining table is a Batons chandelier from LBL Lighting. The French doors lead to a generous porch, which, thanks to Colorado’s great climate, is an inviting extension of usable living space most of the year. “To aid the flow, we made the porch at the same level as the house,” Teague says. “It’s subtle but makes a difference.”

“I always attempt to use the form of a house to respond to the overall typography and geology,” says Teague, who coordinated with project manager Matt Armentrout on the Carbondale home. “Rather than competing with the surroundings, you’re connecting the dots so the building geometry becomes part of the landscape.”

The concept of a house that enables an easy relationship with the outdoors was just what homeowners Bruce and Jane Warren, both avid cyclists, had in mind. As empty nesters with three grown children and six grandkids, their list of specifications also included “a not-so-big house, lots of windows and a main-floor master,” Jane says. But they weren’t sure what the container would look like.

Hiring Teague involved a leap of faith. “He was maybe more modernist than we wanted,” admits Bruce, noting that their apprehension quickly vanished as the house took shape. No stranger to the pervasive “modern is cold” mantra that plagues modernist architects, Teague took the necessary steps to allay their concerns.

Living Room “I’m a stickler for structure to be functional, and those trusses hold up the roof,” architect Harry Teague says. “The space feels good, flows easily to the outdoors and suits how the Warrens live.” The Warrens, who selected their own furnishings, heartily concur. “We love that it works when we are here alone and for entertaining big or small groups of people,” Bruce says. A Woodley’s sectional and Arhaus armchairs and coffee table enhance the home’s relaxed tone.

“Rather than competing with the surroundings, you’re connecting the dots so the building geometry BECOMES PART OF THE LANDSCAPE.” — Architect Harry Teague

ON APPROACH. What looks like weathered, barn-wood siding—it’s actually a prefinished product: Southern Exposure by Montana Timber—signals a warm welcome, while relating to the local building forms. And, according to Teague, the low-maintenance product is superior to the real thing. “When you stain actual wood, it becomes uniform and you lose that random texture,” explains the architect, who topped the walls with a standing-seam metal roof. “But prefinished allows each board to be unique, so it doesn’t look monochromatic.”

A SENSE OF PLACE. Inside, the lofty barn configuration of the great room continues the dialog with the property’s underlying history. “My affection for Colorado vernacular forms goes way back, and the exposed functional beams fit into the agricultural context of the surrounding ranch land,” Teague says. A barn door suspended above the kitchen—another agricultural nod—slides to close off the family room for privacy and noise reduction.

SOUND CONTROL. Noting that large expanses of glass and a massive stone fireplace can make a space feel edgy and sharp, Teague called on his considerable knowledge of acoustics—he designed Aspen’s Benedict Music Tent and Harris Concert Hall—to damp down the noise levels. “We tempered the glass and stone with sound-absorbing insulation in the ceiling, covered with wood slats,” he explains. “Psychologically, the use of wood has the effect of turning a cool space into a warm one.” 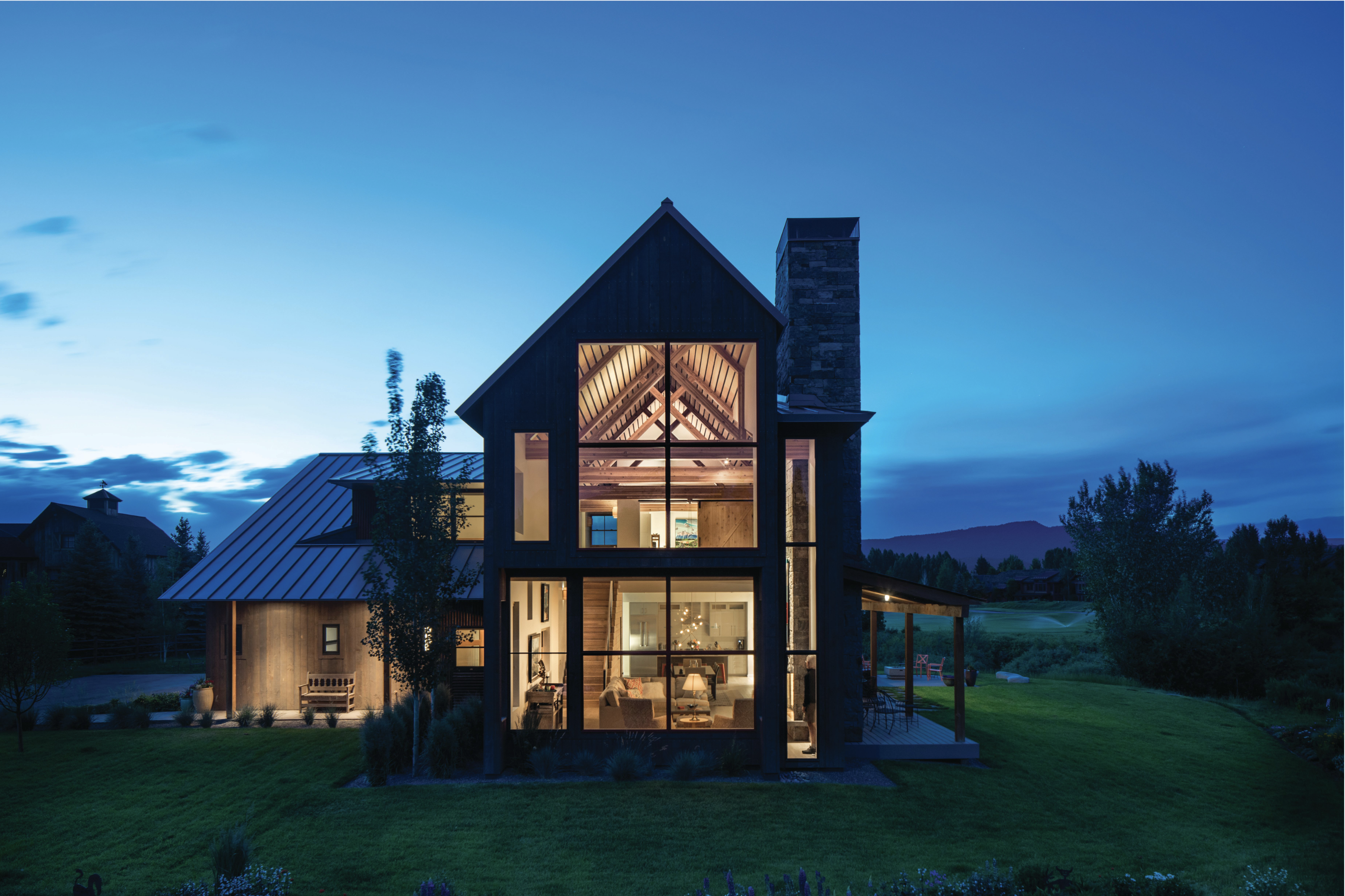 Exterior “It’s not a large house, and we were intent on making the building quite narrow, with one big and tall projection and one low and flat one,” Teague says. “It was the only way we were going to get both mountain and river views at same time.”

This Home is an Ode to Timeless Design

3 products with flash and function

This Home is an Ode to Timeless Design