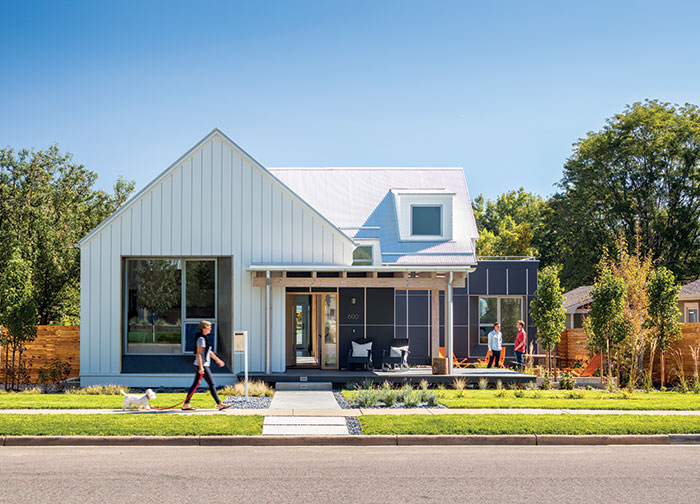 This is a story about white. When Nancy and David Raphael decided to move from the outskirts of Louisville into the town’s historic Old Town neighborhood, Nancy had a vision of exactly the kind of house she wanted to build. Contemporary. Timeless. And, most of all, white. “That’s actually what Nancy told the architect when he asked her what we wanted,” says Dave. “She said, ‘I want a white house.’ ”

Fortunately, the architect in question was Andy Johnson. “He’d done two or three homes I was just crazy over. Absolutely crazy,” says Nancy, a recently retired nurse with an artist’s eye and a passion for design.

Johnson, who works and lives in Louisville, shares the Raphaels’ affection for their Old Town neighborhood. “The character of all of these historic miners’ homes is really charming,” he says. “It has a scale that feels cozy and comfortable; it has that classic hometown feel.”

Dave describes Johnson as part architect/part psychic. “The first two houses we built, Nancy would say what she wanted, and somehow it was hard for the builder or architect to interpret her wishes. What Andy brought to the table was his ability to really listen,” says Dave.

“I’d have a meeting with Andy, and I might not be sure he’d heard what I was asking for,” says Nancy. “Then, at our next meeting, there it was, incorporated into his plans.”

“So I said, ‘Let’s design for a lifetime.’” — Nancy Raphael, Homeowner

In addition to white, Nancy asked for single-floor living, with a first-floor master bedroom and bath with wide halls and doors. “I had a friend injured in a terrific ski crash,” she says, “and it started me thinking about wheelchairs and walkers. You start thinking about things like that as you get older. So I said, “Let’s design for a lifetime.’ ”

The second floor was added on the architect’s recommendation. “It’s a wide lot,” explains Johnson, “and a one-story structure would look out of scale with the property and the neighboring houses, so I recommended moving the guest space that was going to be in the basement upstairs.” The 3,400-square-foot home rests beautifully in its space. “It was so fortunate because while we were planning the house, our daughter moved home from Amsterdam and moved in with us and had a baby,” says Nancy. “Helping to raise our grandson and planning and building a house and moving—holy cow. The craziest year! Having that upstairs space with its own private deck for them has been wonderful.”

It’s been a little more than a year since the Raphael family moved to town. To the outsider, the house looks wonderfully finished. In the architecture, the landscaping, the interior design, and even the salad plates, there’s a cohesion that few lived-in homes achieve. “I wake up every morning and I still cannot believe I live in this beautiful white space. It’s just a piece of art,” says Nancy.

But to her exacting eye, it remains a work in progress. There are planters being built to add elevation and interest to the front walkway, a fire pit planned for the back patio, and small details on her mind, like those sleek gray metal dining room chairs. “I’d change those out in a heartbeat,” she says. “White. I’m thinking white.” 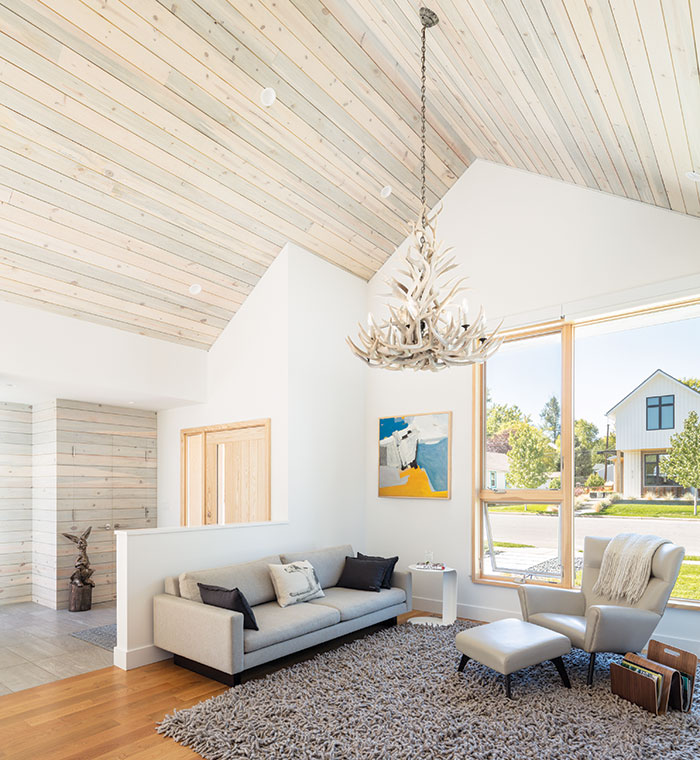 “The challenge with white space is to create warmth and depth,” says architect Andy Johnson. “We used locally sourced beetle-kill pine for the ceilings, whitewashed to mellow the natural intense blues in the wood. It blends out nicely into the house’s white palette, and it’s a way to take those lofted ceilings and bring them down a little bit.” The painting is by Lafayette artist Anthony Grant.

The chandelier, too, adds interest. “That antler chandelier has hung in every house we’ve ever built. It’s been with us for 23 years,” says homeowner Dave Raphael. Adds Dave’s wife, Nancy: “I’m not sure what phase I was in. We went up one weekend to Crystal Farm in Redstone to look at their work. They had a pet burro that went in and out of the house. It was so dang funny; we still laugh about it. That chandelier will go with us to our graves.” 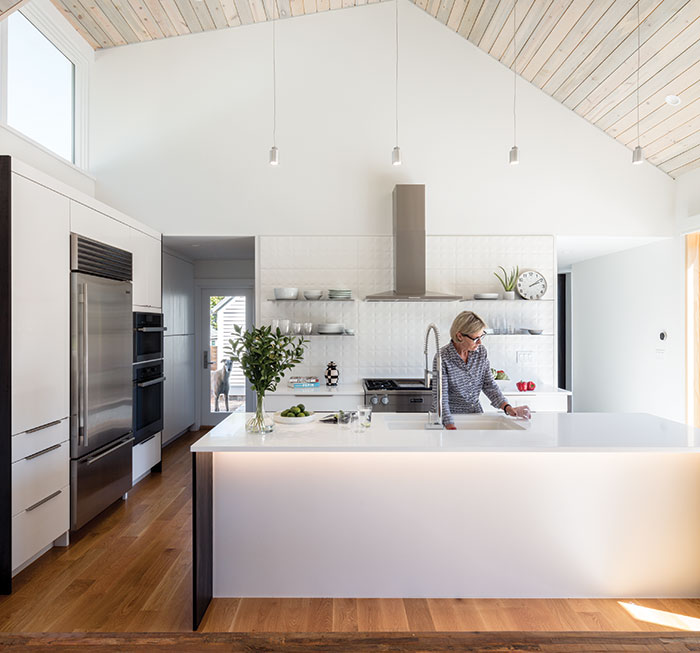 Nancy wanted the main kitchen to be completely uncluttered. “I can’t stand anything out on the counter. It makes me crazy,” she says. The key to decluttering? Lots and lots of built-ins. The cabinets on the left are intended to blend into the wall, says Johnson. “But the most important thing we added,” he says, “was a butler’s pantry around the corner with enough countertop to hold appliances. Close the pocket door, and you can’t even see it.” The under-lighting along the counter and shelves was also Johnson’s idea (“I call them Andy-isms,” says Nancy). The indirect illumination gives a warm glow to the white space. 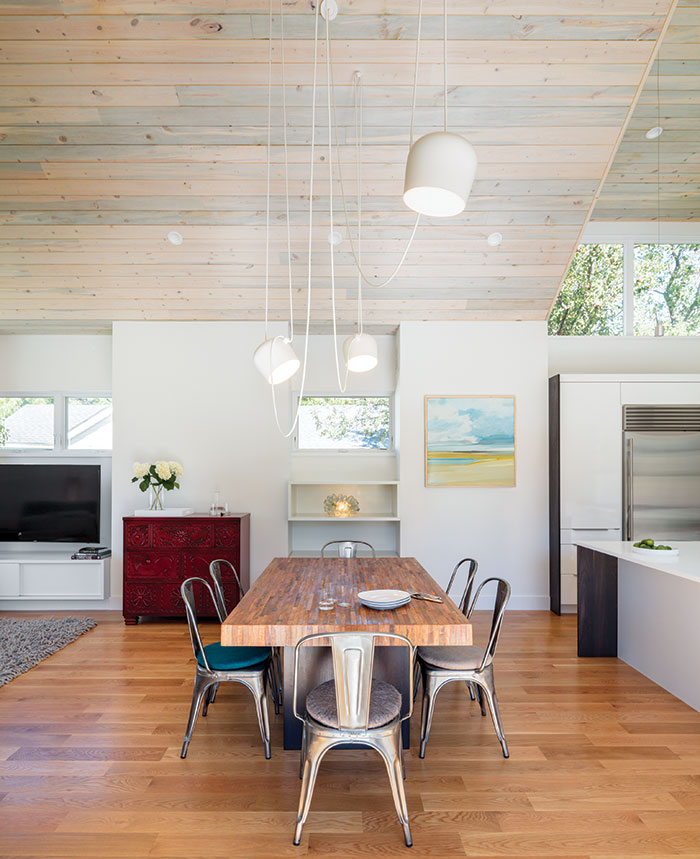 The reclaimed wood table is a find from EWF Modern, a store in Portland, Oregon. “The wood is simple and warm, but the look is very modern,” says Nancy. The striking white hanging lamps from Flos were another Nancy find. “I think Andy was hesitant, but David ended up buying them for me as a gift,” she says. The landscape painting is Anthony Grant. 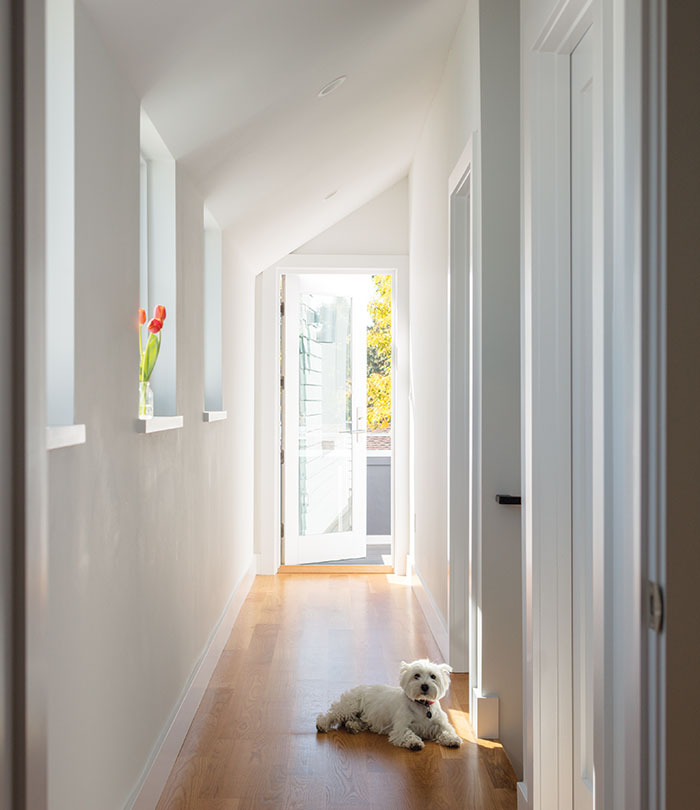 This upstairs hall leading out to a private deck is one of Nancy’s favorite places in the house. “I think Andy designed this space because he knew I really love Scandinavian architecture—the angle of the ceiling and the very square, deep-set windows,” she says. “The windows are beautifully placed and look so cool from the outside too. It’s that Scandinavian house feeling. I wish we had even a little bit more of this in the house.” 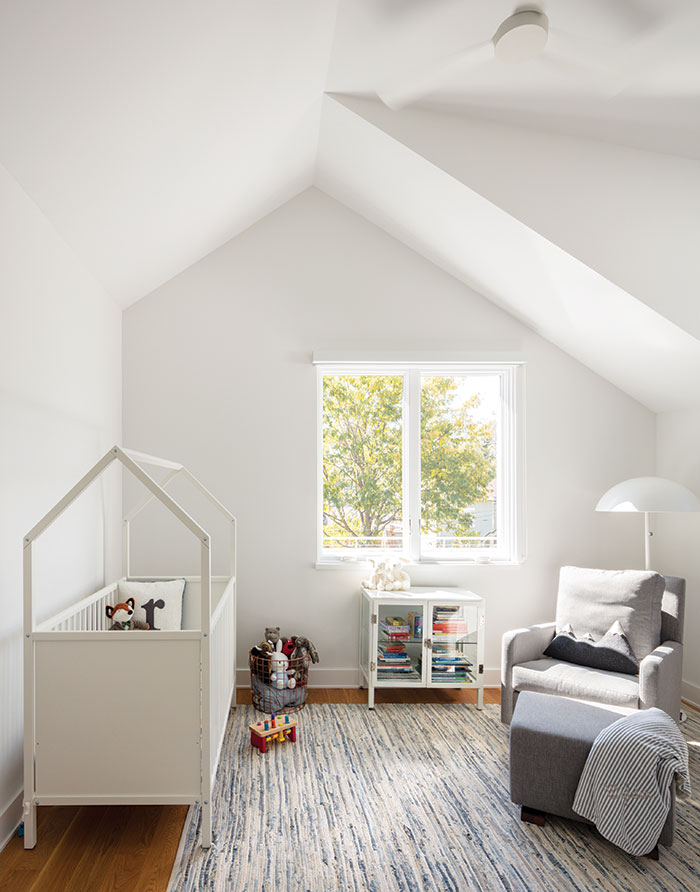 The architect and the owners are big fans of the upstairs that almost wasn’t. “The ceilings on the second floor have a lot of contour and shape; they’re almost sculpted,” says Johnson. “It feels airy and delightful.” And this little nursery has Nancy’s vote for best room in the house: “The angles in that room are remarkable. And the windows are really high, so all you see are the sun and clouds in the day, and the stars at night. To be honest, it was supposed to be David’s office, but we’ve got a lifetime to get a desk in there—right, Dave?” 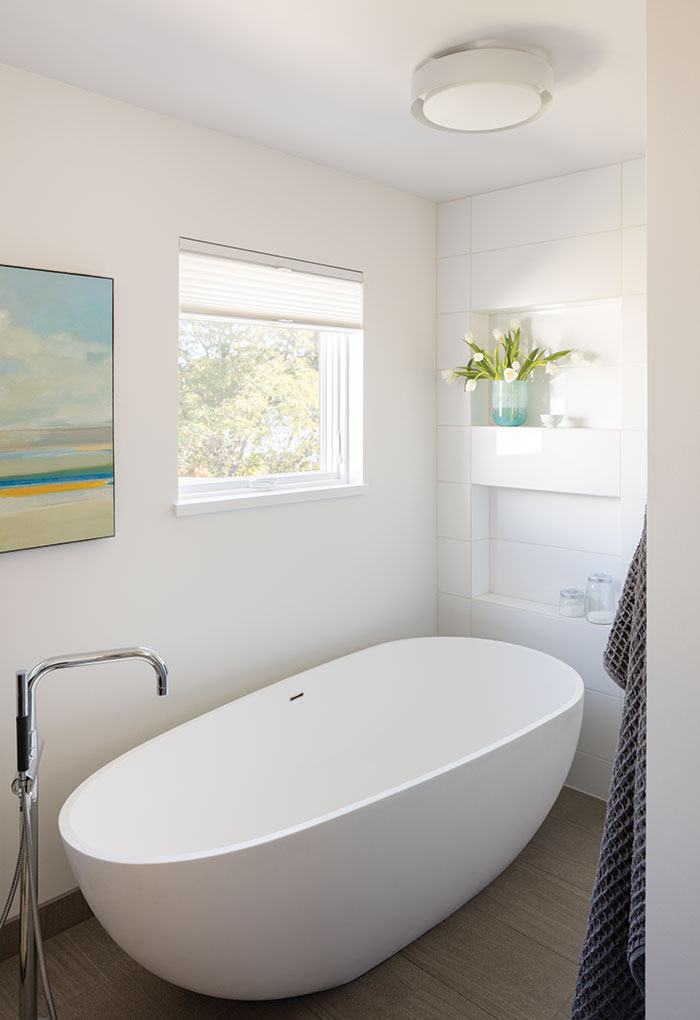 There’s a lovely geometrical interplay between the square wall niches and high, square windows in the master bath, but the real shape star of the room is the sculptural oval tub by ADM, a California company. “It’s the best sight-unseen purchase I’ve ever made,” says Nancy, who chose this tub after considering similar ones that cost twice as much. “I had a very small tub budget, and knew I wanted matte, not shiny. I did a lot of research.”