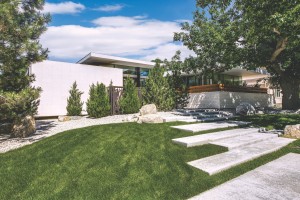 Homeowner Peter Blank worked with architect Brian Ojala and landscape architect Paul Wrona to create an entrance that ushers guests from public to private space. Staggered concrete steps lead to a gated courtyard, where a glass front door gives visitors a peek into the light-filled foyer. | Photography by Teri Fotheringham

As an interior designer and real estate broker, Peter Blank knew he wanted to build a modern dream home in Denver. He approached the design unconventionally, focusing on creating a home that evokes a classic timeless modernism. 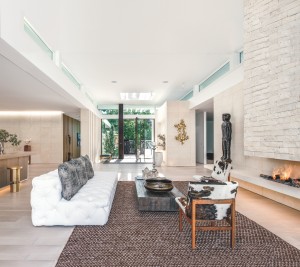 A grand fireplace and organic materials, including stacked stone and cowhide upholstery, make the seating area inviting. A custom sofa, which was built to look beautiful from all sides, allows guests to sit on its seat or back.

Everything else—practical matters such as square footage and number of stories—was secondary. Blank partnered with architect Brian Ojala of Entasis Group, who was willing to get philosophical. “We didn’t talk about the number of bedrooms or the size of the house,” Ojala says. “It was all about the feeling of what Peter wanted. It was about calibrating the intangible.” 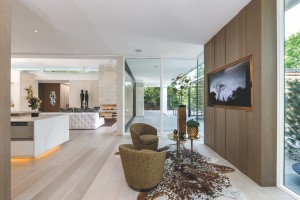 Blank says he wanted to rethink the “black box.” Instead of having a television in the living room, he created an intimate TV niche with two swivel chairs. For gatherings where more guests want to watch a movie or program, he uses the downstairs lounge area.

To achieve this, Blank had a vital request— no interior visible doors. “It was imperative that there be no visible interior doors,” Blank says. “I did not want a sea of doors.” The only doors are exterior. 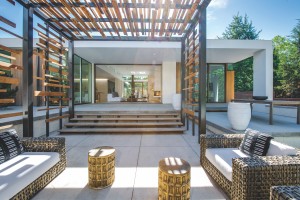 An outdoor structure made of bronzed steel and wood offers both privacy and beauty. The pavilion is the homeowner’s interpretation of a Japanese tea house. “It protects you from the sun, and the shadows it creates are beautiful,” Blank says. “It invites you to go outdoors.”

The front door—which is enormous, 8 feet by 9 feet and approximately 800 pounds—even emanates ease. “You can feel the mass, but you can move it with a finger,” says Ojala. The door opens to reveal a light-filled foyer that sets the tempo for the entire house. “You enter a voluminous space, but you don’t feel lost,” Blank says. “It feels intimate because the ceiling height drops on either side.” Ojala incorporated a perimeter of glass all the way around the house. The glass seemingly eliminates the junction where walls and ceilings intersect. “The roof appears to be floating,” Ojala says. 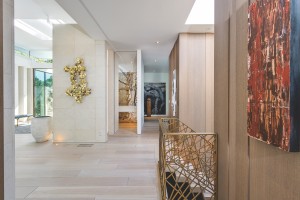 Blank designed the staircase railing himself. The pattern and brass finish entice visitors to go downstairs. “We chose solid minimalistic treads,” says architect Brian Ojala. “Peter wanted to punch up the handrail and make it an artistic piece. After it was installed, I thought he nailed it.”

The foyer is a microcosm for the entire house—it’s all about materials, light and space. “I wanted a house that had stone,” Blank says. “Not only stone—it had to be dry-stacked like in Italy or Mexico. To me, that speaks to the past, and it also speaks to the present.” Ojala and Blank spent time discussing the home’s ethos. “What would evoke a feeling of calmness? We talked about light and material. We wanted to use the least amount of material in the space,” Ojala explains. 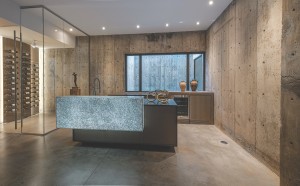 The lower floor evokes a sense of calm. “It’s about the honesty of the materials. We didn’t want to keep adding more,” architect Ojala says. Concrete walls and floors create a neutral backdrop for art and furniture. The retreat, which has a dramatic glass-walled wine room and a lighted bar, has a lounge feel.

“You’re surrounded by light everywhere and the beauty of just a few possessions.” 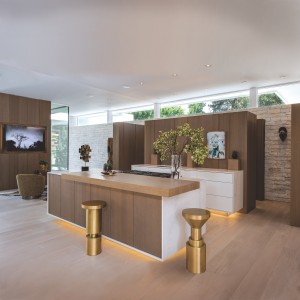 Everything that’s visible in the kitchen is meant to be visible. This artistic approach worked because the homeowner came up with an ingenious solution: the refrigerator, pantry and small appliances are hidden behind a wall of millwork. The kitchen relies on a mix of textures and materials that create a powerful backdrop for the art pieces on display.

The secret is subtraction. “I wanted to create a soulful experience,” Blank says. “How do I live with what I love versus all the stuff I accumulate? If it’s going in a closet or in storage, do I really need it? I wanted a house without visual clutter.” Everything visible is purposeful. “Because of the withdrawal of your attention from objects, your mind can feel free in the space,” Ojala says. 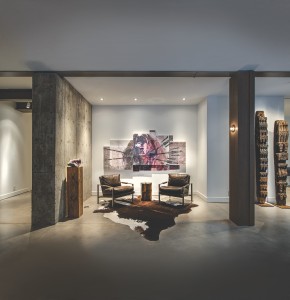 A downstairs sitting room acts as a contemplative space that encourages meaningful conversations. Simple leather lounge chairs and almost brutalist surroundings highlight the powerful artwork in the space. This artful essentialism may help to shift the focus from physical stuff to abstract thought.

This essentialism extends to the kitchen. “I didn’t want to entertain and see range hoods and refrigerators,” Blank says. He came up with a unique solution. “The back wall of the kitchen became an art wall of millwork.” Behind that, Blank secreted the large appliances and pantry. “The kitchen designers told me you can’t have the refrigerator hidden behind the kitchen, that it didn’t make any sense, that no cook is going to like that,” Blank recounts. In the end, his creative solution functioned beautifully. “Well, guess what? It works,” he says. 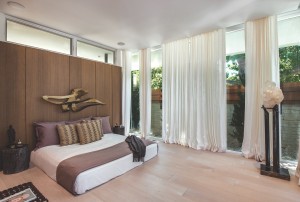 Every window in the home intentionally frames something beautiful. In the primary bedroom, a wall of windows looks out into one of the house’s many courtyards. Nothing in the bedroom adds visual clutter, so the focus can stay on the quality of the light or the splendor of the greenery.

The main floor is open and full of light. For the downstairs, Blank wanted a lounge feeling. The lower level has a more masculine aesthetic, with lots of concrete and wood. “At night, downstairs is my favorite space because it is dark and cozy,” Blank says. 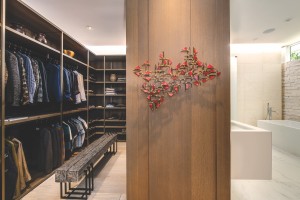 An open closet pushed the homeowner to reduce the number of clothes he keeps. “It forces you to be organized,” he says. “It’s like you’re shopping for your own clothes on a daily basis. To me, it was so cathartic.”

The home took shape around an idea. “We came from a psychological point of view,” Ojala recounts. “The goal was to be utterly present— conscious presence.” This focus enables Blank to live more intentionally. “You’re surrounded by light everywhere and the beauty of just a few possessions,” Blank says. “This architecture forced me to let go.”