One of America’s most beloved treasures, the National Park Service is about to celebrate its 100th birthday. A year of festivities, including festivals, special tours, and parties to honor the occasion, was kicked off at the 2016 Rose Parade. Colorado boasts four amazing parks (the national total is 59), and in an effort to help with early planning, we offer some park-by-park suggestions for ringing in the milestone. 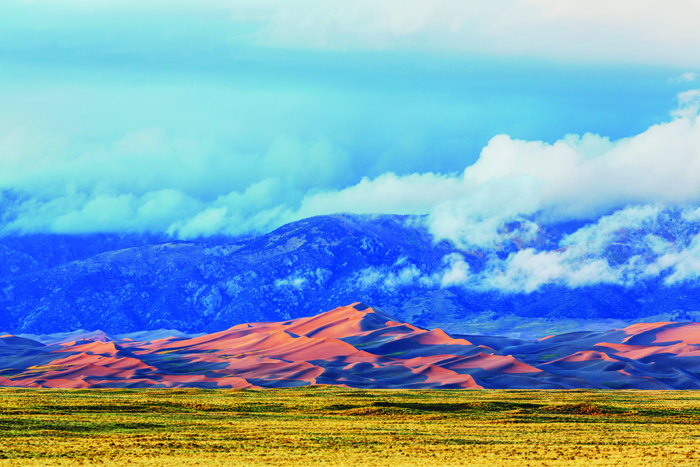 Basics: No need to go to Hollywood for a Star Wars backdrop—this park offers 30 square miles of dune fields with otherworldly views. An hourlong hike to the top of High Dune offers panoramic vistas—including Star Dune to the west, which at 750 feet is the tallest dune in North America. The park’s 150,000 acres also include lakes and trails that weave through alpine forests. Mosca Pass Trail, a 7-mile round-trip hike that ventures into the higher terrain of aspen and evergreen groves, follows the ancient paths of American Indians and early civilizations. For a similar adventure without the sweat, Medano Pass is a four-wheel-drive road that crosses through mild streams and ventures through dense forest. Certainly not for the small SUV, it has some rough bumps but is well worth the traverse. Visit nps.gov/grsa for more info.

When to go: The short-lived Medano Creek on the east side of the sand dunes is spectacular in spring. Runoff from the nearby Sangre De Cristo Range typically begins in April and is all but dried up by Memorial Day. It only flows in good runoff years, so make sure to check the Park Service for updates. Kids—big and small—strip down to bathing suits, shorts, and water attire and explore the waves of water. Some parts are shallow, some much deeper, but all are icy-cold and refreshing. Follow the meandering stream up the valley floor through the sand brigades, and watch it increase in size and passion. Spring’s mild temperatures also make hiking more enjoyable, even on windy days.

Epic activity: It’s a tie. For the more adventurous, sandboarding and sledding are permitted anywhere in the park where there is not vegetation. These activities are best in the early morning or evening, when sand temperatures are lower (they can soar as high as 150 degrees Fahrenheit). One caveat: Sandboards do not work if the sand is wet, such as after early afternoon thunderstorms. Sandboards, which differ from ski- and snowboards, aren’t available in the park, but there are some nearby rental locations.

Seven miles outside the national park is Zapata Ranch, owned by the Nature Conservancy. Their 2,000-head bison herd is one of the largest in the nation, and spring brings a populated horizon of new offspring. Located on 50,000 acres is the Medano pasture, where the bison roam and thrive in the same ecosystem that forms the Great Sand Dunes. The ranch offers tours multiple times a week in season and a stop at the Bison Barn, where working aspects of these mammals are displayed. Visit zranch.org for more info. 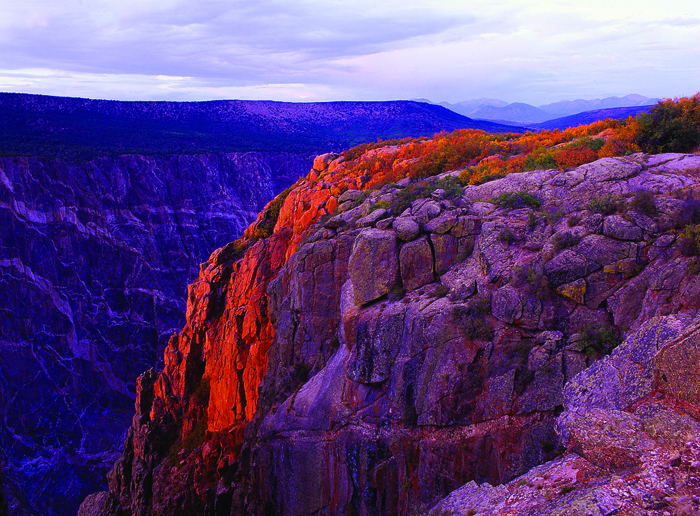 Basics: There’s nothing black about the canyon; it’s so named because the bottom of the gorge is fabled to receive only a little over 30 minutes of sun a day. The Black Canyon of the Gunnison is the nation’s highest canyon. Its greatest width is 1,100 feet across, and its narrowest span is only 40 feet across. The park encompasses 30,750 acres, including Canyon Rim Road, a two- to three-hour drive around Gunnison Gorge. Visitors can also access the gorge, 2,000 feet below, to fish, picnic, and enjoy sites 2 million years in the making. Don’t miss the popular Painted Wall, the tallest sheer cliff in Colorado, rising 2,250 feet and surrounded by spires and other landmarks in a small, enclosed area. There is a pull-off here, so it is easy to  access and photograph. Visit nps.gov/blca for more info.

When to go: This park has the lowest attendance of any national park in the state, so go whenever you can. Runoff during spring and early summer brings rushing waters and an ideal time for spotting great horned owls, peregrine falcons, and eagles. Autumn in the park abounds with color in the oak flats.

Epic activity: The Morrow Point Boat Tour (about an hour from the gorge in Curecanti National Recreation Area) is a ranger-led 90-minute tour that ventures into the gorge via Morrow Point Reservoir. Cruises run twice a day June through Labor Day and are always dependent upon weather and spring runoff conditions. It’s a popular choice but a wonderful way to truly take in the mind-blowing depth of the canyon. 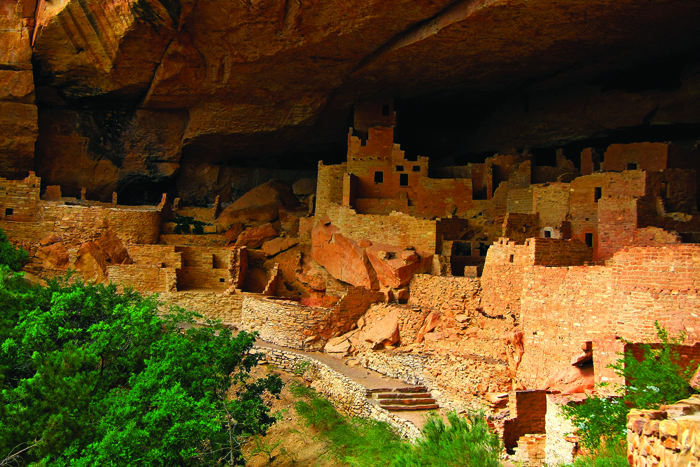 Basics: This 52,000-acre park is also a World Heritage Site as it includes the nation’s best-preserved (and explorable) examples of ancient Pueblo cliff dwellings, along with 5,000 known archaeological sites. The newly completed Mesa Verde Visitor and Research Center is a helpful first stop: You can map out your route, purchase tour tickets to multiple cliff dwellings (some with 50-person limits), or choose a bus tour to learn about the dynamics and sheer impressiveness of the relics and culture. Mesa Verde’s Spruce Tree House and Step House on Wetherill Mesa are typically self-guided; however, Spruce Tree House offers free ranger-guided tours early November through early March. It’s the third-largest cliff dwelling in the park, with 130 rooms and eight kivas, underground dwellings once used for religious purposes. A drive along the 6-mile Mesa Top Loop Road provides views, as well as evidence of recent fires that have threatened the area. Wetherill Mesa, which is less crowded, is open May 1 through October 31 (weather permitting) for easy bicycle rides and short hiking trails to archaeological sites, as well as expansive views and scenic overlooks. The 5-mile Long House Loop is open for hiking and bicycle riding. For a bite of native produce, wild game, and fish, stop for dinner at the park’s exquisite restaurant Metate Room. Visit visitmesaverde.com and nps.gov/meve for more info.

When to go: The park is in the southwest corner of the state, where summer months are hot and bustling with tourists. Go during spring for wildflowers in bloom or autumn for foliage and aromas of harvest throughout the area. Learn the secret of the “three sisters” and the Puebloans’ legendary farming and harvesting regimen.

Epic activity: Those who visit Mesa Verde in the warmer months can experience a starry surprise. Mesa Verde culture used the stars in both farming and religious patterns. The park offers two evening adventures, the Twilight Tours and Photography Tours (visit recreation.gov for 2016 pricing and times). Memorial Day through Labor Day, head to the Morefield Amphitheater at the Morefield Campground four miles inside the park. Since 1907, nighttime campfire talks have been hosted in the park, a tradition that was started by archaeologist Jesse Fewkes. They’re free and last about an hour. Bring your flashlight. 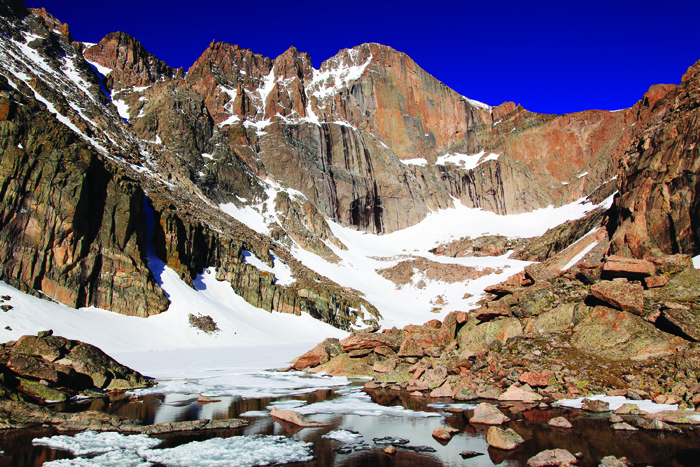 Basics: Colorado’s largest park, RMNP covers 265,716 acres with more than 350 miles of hiking trails featuring high-alpine vistas, runoff-fed lakes, and meadows loaded with flowers and wildlife. Longs Peak, the state’s northernmost fourteener, makes for a grand entrance to this massive park. And for those who like traveling the high road, the park’s Trail Ridge Road (usually open Memorial Day through mid-October) is the highest continuous paved highway in North America, reaching more than 12,000 feet at its summit and crossing the Continental Divide along the way. Moraine Park is a prime place to view elk during rutting season (including mating calls and rituals)—starting in early September. Visit nps.gov/romo for more info.

When to go: Summer is peak season, so travel at other times of the year for more solitude and faster access to the trails. We suggest visiting in late fall and early winter. Estes Park is the base camp for RMNP: Two good choices for bedding down there are The Stanley Hotel and Romantic RiverSong, which is adults-only. The Wapiti pub is ideal for resting and reveling in the scenery. Winter offers a multitude of activities: sledding, cross-country skiing, snowshoeing, ice climbing, and ranger tours.

Epic activity: Elk rut. Book a session with Yellow Wood Guiding, run by Jared Gricoskie, a naturalist and wildlife biologist. Gricoskie is a master at explaining the individual behaviors of these mammals and the almost symphonic dance of the bulls. Also popular in fall are educational elk tours. Try Ruttin’ Around with Green Jeep Tours or an Elk Expedition with the Rocky Mountain Conservancy. These 2.5-hour park tours leave in early evening during mating season from mid-September to mid-October.