A Dated Denver Home Transforms Into An English-Style Cottage

By his own admission, architect Don Ruggles’ first impression of a residence he was called upon to remodel was less than enthusiastic. “The house had no sense of geometry, and I thought it should be scraped,” says Ruggles, sharing that the homeowner, a persuasive attorney, convinced him otherwise. “The owner gave me a set of the original plans, and after studying them, I thought I could work with some of the bones and create something with composure and beauty.” 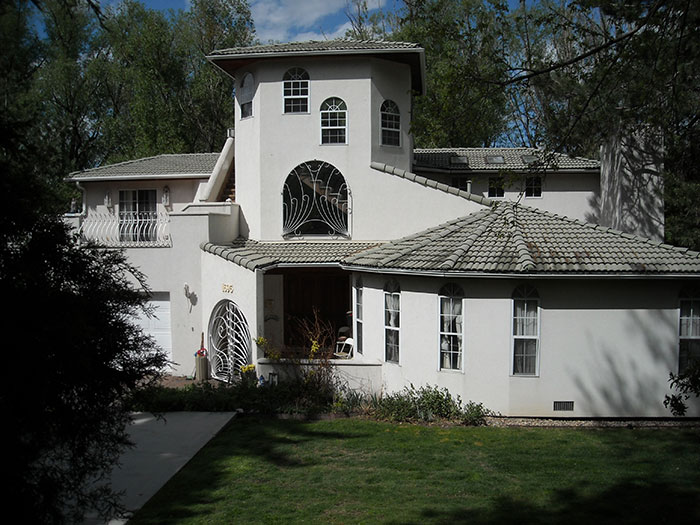 As a Denver native, the homeowner was intimately familiar with the coveted site and the house poised at the edge of Cherry Creek. “I helped my parents buy the property 30 years ago, and the house eventually came to me,” she explains. But the inheritance was devoid of sentimentality, and she was eager to restructure the dated domicile into something more in keeping with her own English Craftsman leanings. She gave Ruggles a picture of a house she had seen on Downton Abbey, and in turn, he presented her with a sketch of a cottage that was just what she imagined. 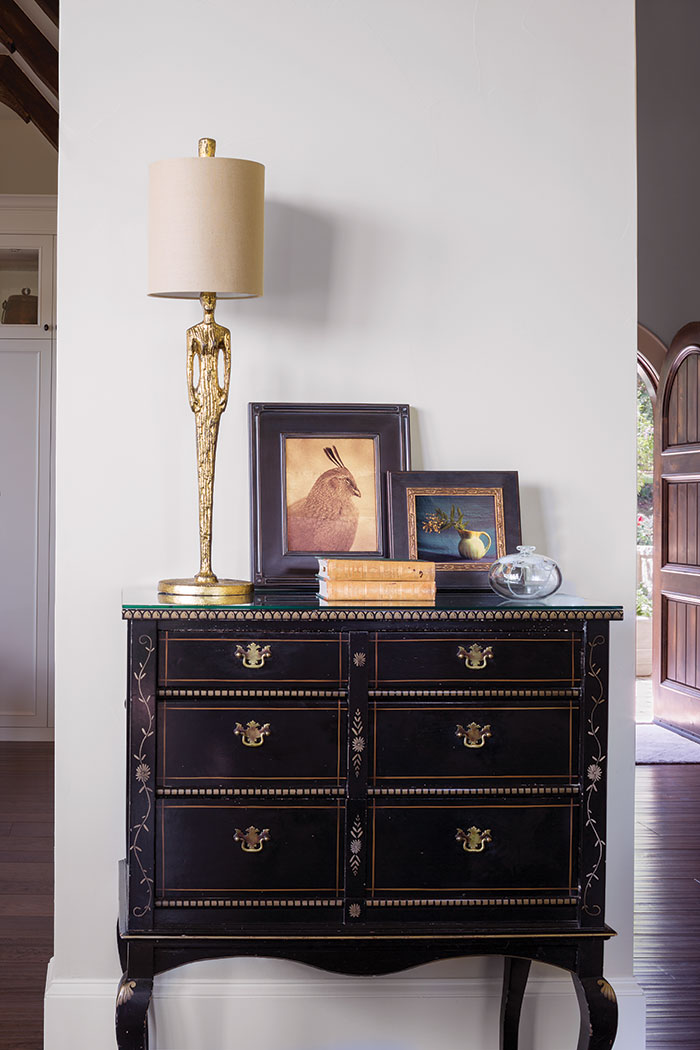 Pure repurposed and reused many things from the homeowner’s previous residence, including this antique dresser. The lamp is from Uttermost, and the photographs are by Kate Breakey, from the Goodwin Fine Art gallery.

After determining the double garage and front door were in the right location, Ruggles proceeded to change pretty much everything else. “We came off the existing foundation and rebuilt the house piece by piece,” he says. He instilled the missing geometry by designing a second-floor addition over the garage to match a similarly shaped and scaled structure on the other side of the front door; twin dormers astride a central gable punctuate the symmetry. Cloaked in cut limestone and stucco and capped with a clay-tile roof, the building morphed into something quintessentially Cotswold.

When it came to the interiors, a longtime relationship with the homeowner—including the design of her previous house—gave interior designer Julie Thornton Pure a distinct advantage. 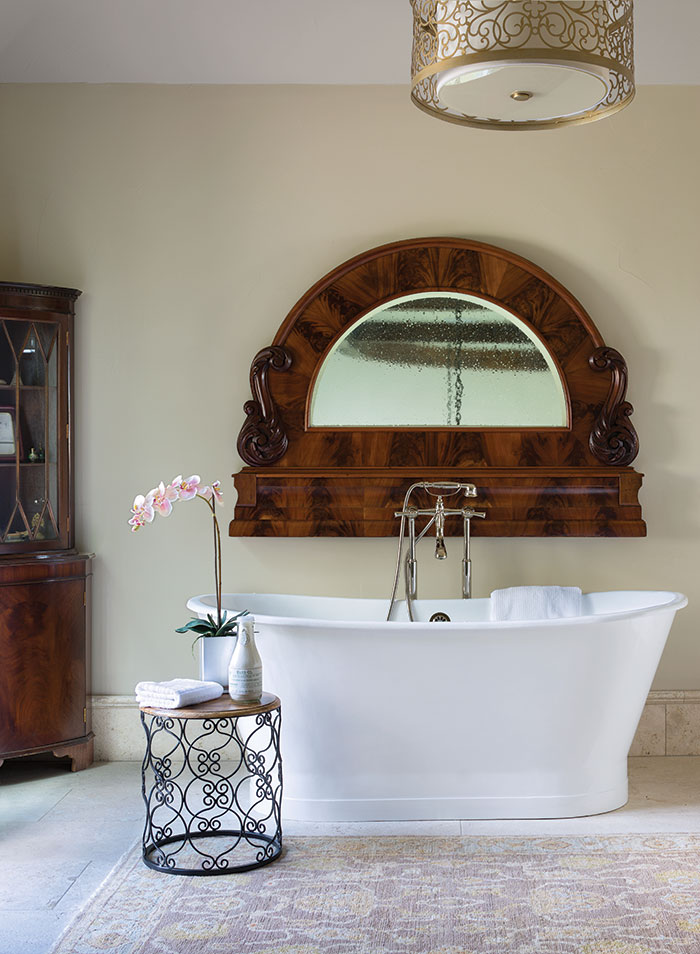 A Ferguson soaking tub is a statement-maker in the master bath, where it is paired with an antique hutch. Above the tub, the designer cut an opening in an existing antique headboard to create an interior window, with views to the grand piano below. “It was in the guest room in her previous house, and she really wanted to see it somewhere here,” Pure says.

“The owner loves neutrals, but she tends to go gold, so I convinced her to consider butter with some soft, soft grays,” says Pure, who sought rugs in those tones, followed up with similar hues on the kitchen island and upholstered the living room seating in complementary creamy-colored fabrics. “I also wanted it to reflect her personality, which is understated but with a little bit of sparkle. The goal was timeless elegance.”

Except for the ceiling beams determined by the architect, Pure drew all the moldings, including the stained cherry-wood wall in the master bedroom sitting area. “The house is traditional, but the lighting and finishes give it an edge and keep it current,” she says.

Throughout the project, Pure and Ruggles relied on builder Lance Nading to find the best craftspeople to execute their vision. “It wouldn’t have happened without Lance and the amazing creativity of the entire team,” enthuses the homeowner. “They created a beautiful home with a sense of quiet in the middle of a busy city.” 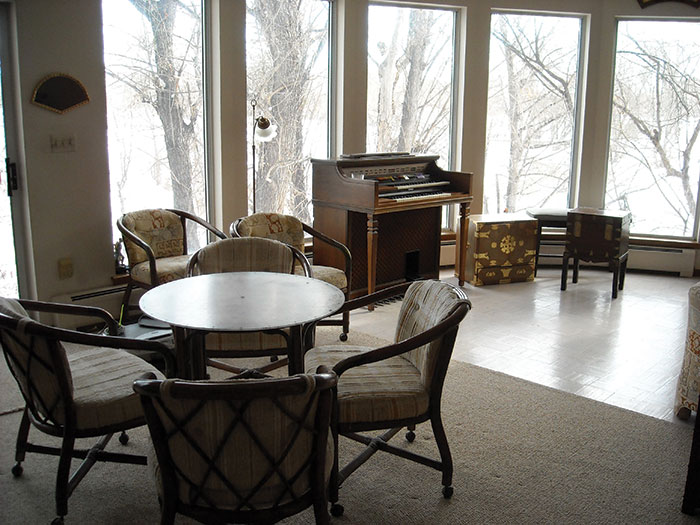 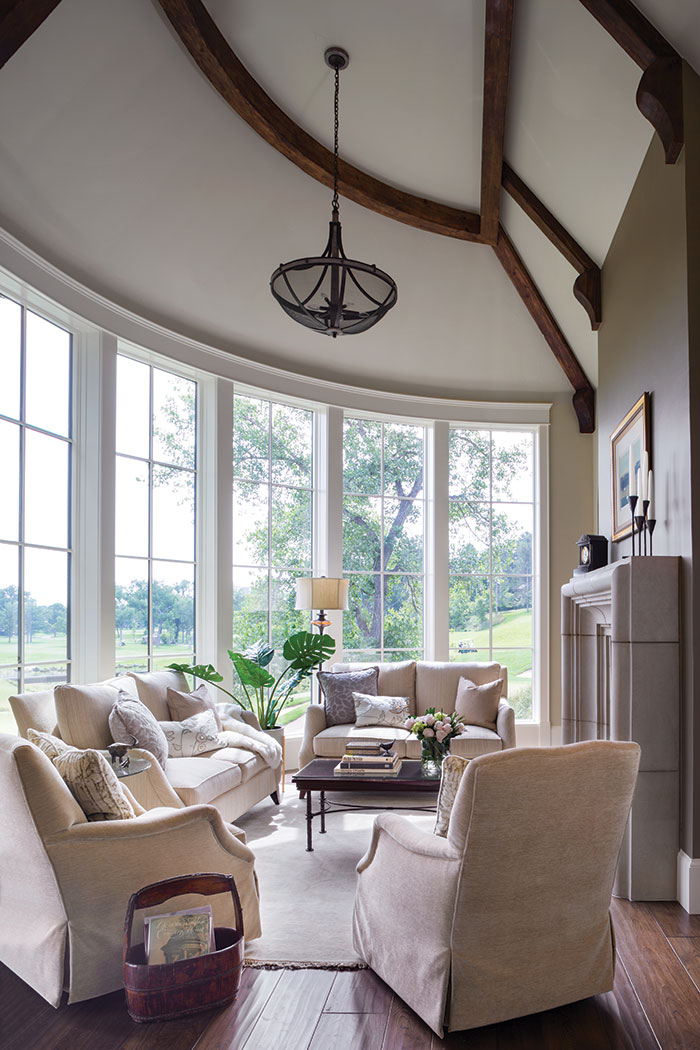 The rounded shape of the living room mandated that all the furnishings, including a pair of Pearson sofas from Chuck Wells and Associates, had to fit perfectly around the new limestone hearth that Julie Thornton Pure designed. “The chairs had to swivel to the Cherry Creek view,” Pure says, about the pair by Moda Antica. 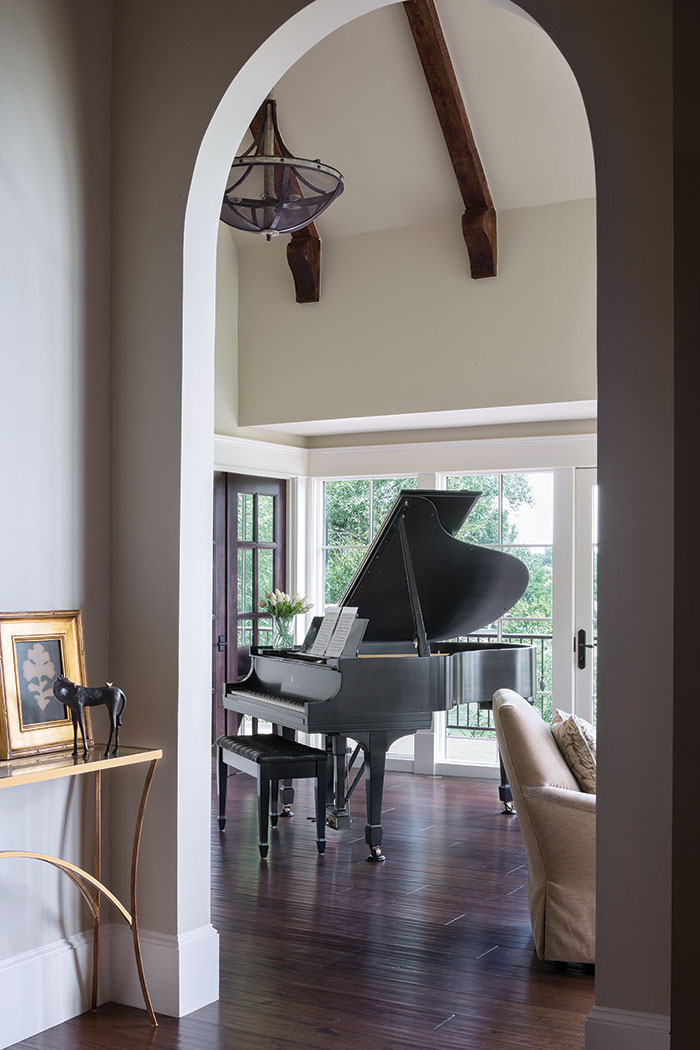 An elegant arched opening frames the grand piano in the living room. The light fixture is by Kalco, and the distressed-hickory floors were pre-engineered to allow for radiant heat. The windows are by Sierra Pacific. 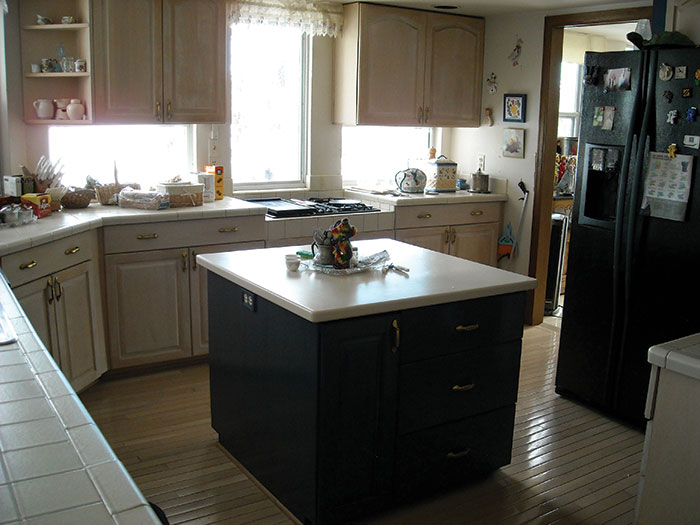 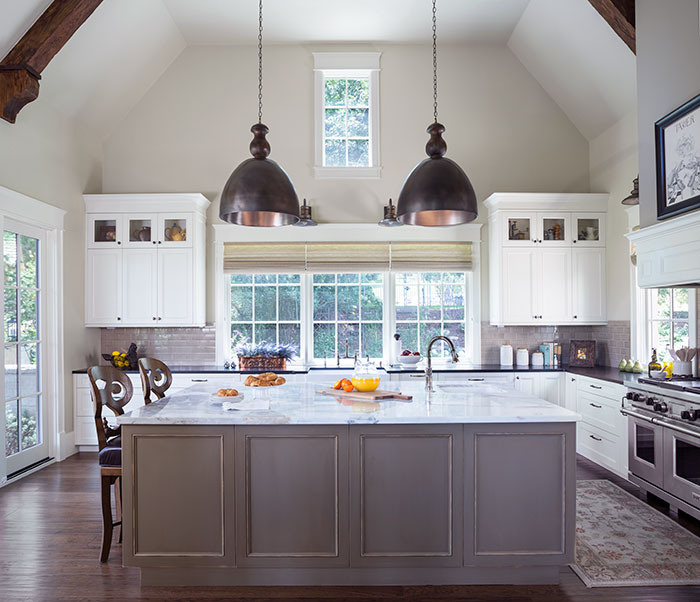 The designer extended her artistic abilities to all the light fixtures by hand-brushing the glossy metals to make them warmer and more distinctive. In the kitchen, for example, she grayed down the original shiny-silver finish of the hanging lights. In lieu of too many upper cabinets, the architect opted for windows, and the crisp-white lower ones are topped with black-coffee-leathered granite. EliSons Workshop made the cabinets. 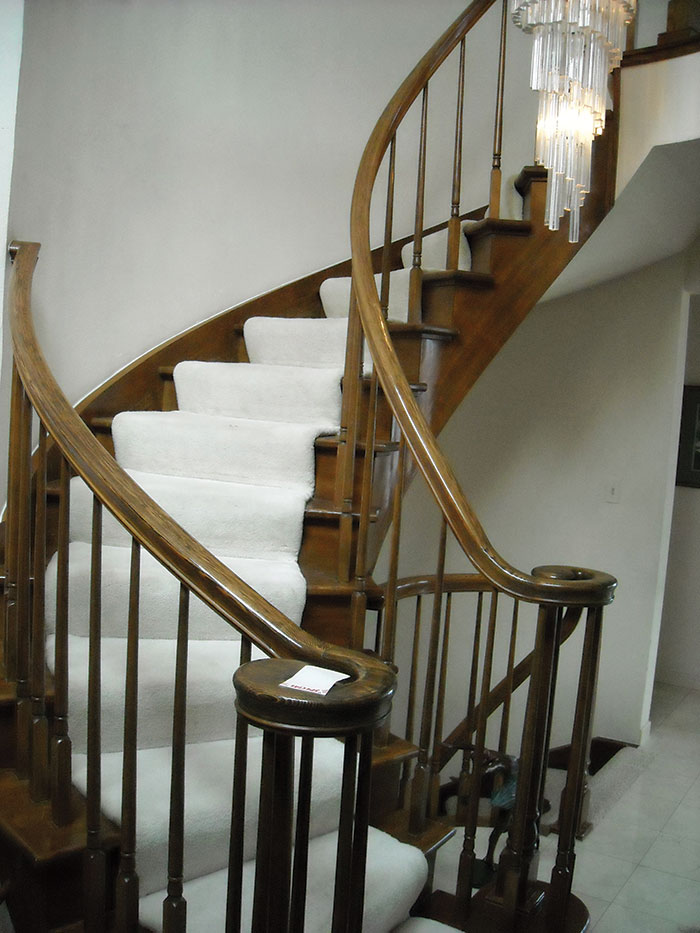 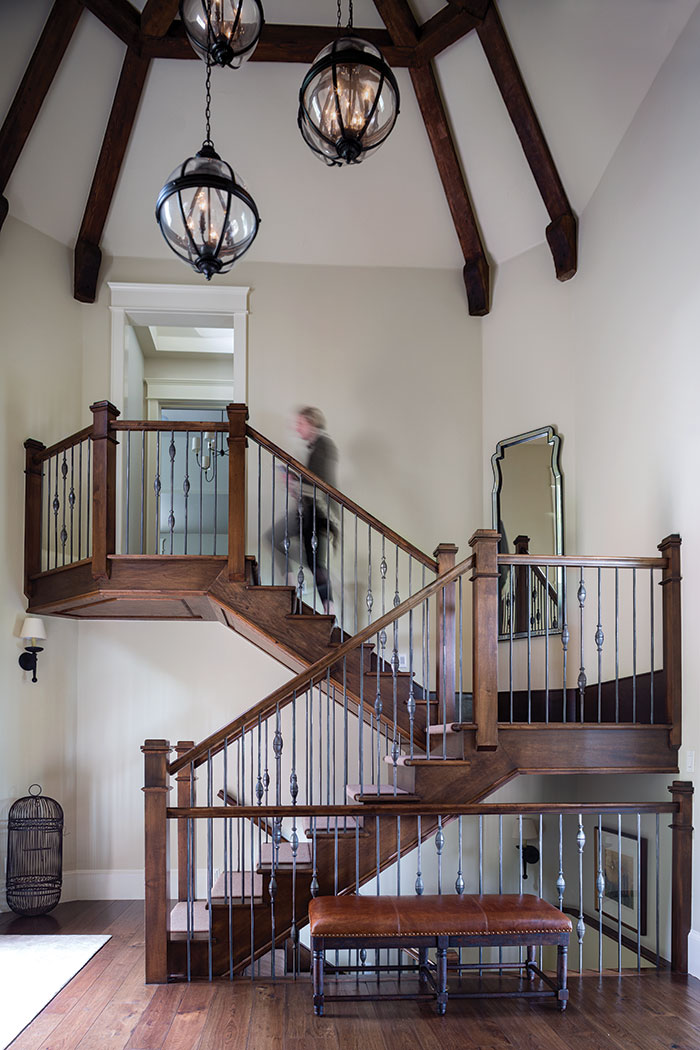 Conceptualized as a piece of furniture that extends from the wall, the stained-alder staircase replaced a dysfunctional curved rendition. Architect Don Ruggles used the octagonal shape of one of the home’s original roof forms to frame the entry ceiling, and then he carried the idea down to the basement. The bench is by Uttermost, and the pendant fixture is by Feiss. 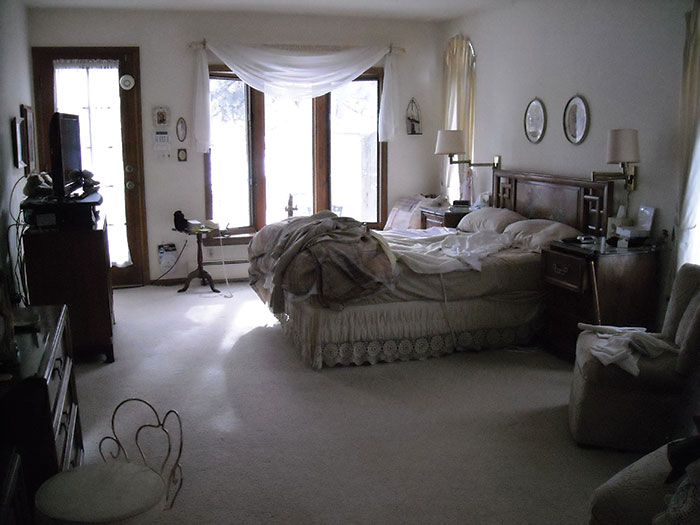 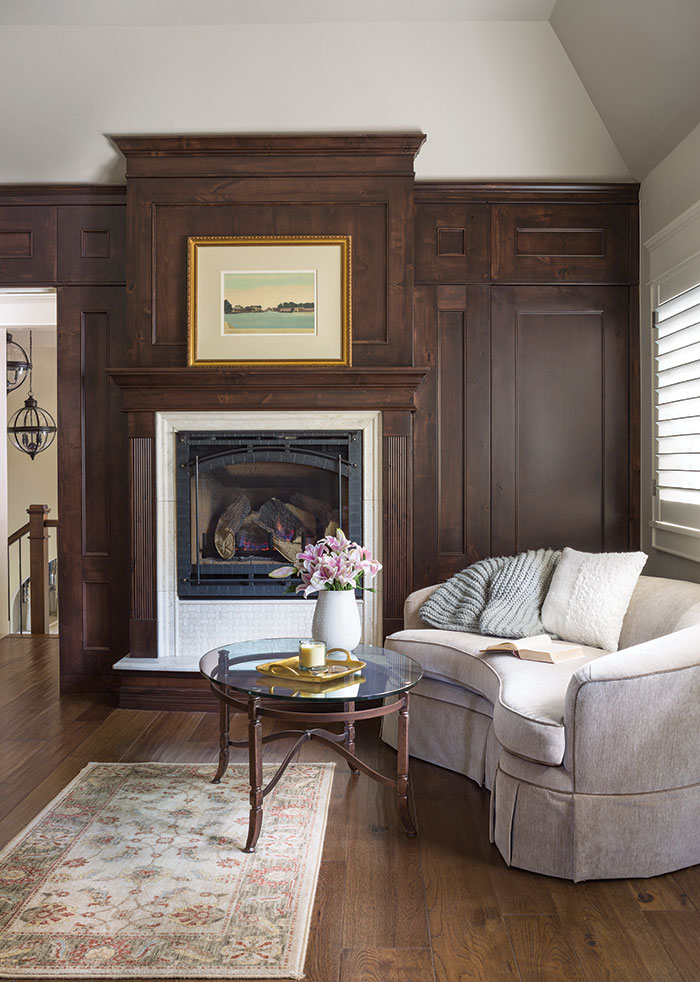 Travertine tiles surrounding the fireplace in the master bedroom sitting area contrast with the dramatic stained-cherry wall. The curved settee is by Thornton Design, the table is from Whitney Evans, and the antique rug is from the homeowner’s collection. 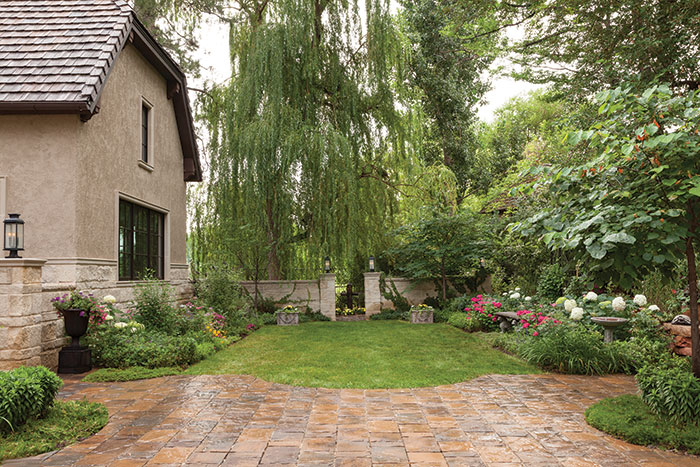 Ruggles collaborated with landscape architect Phil Steinhauer on the placement and design of the formed concrete walkway. Steinhauer selected relaxed plantings in keeping with the cottage-style gardens so prevalent in England.