"When you build a custom house, every little thing you do goes into making it unique,” says builder Chris Withers of Old Greenwich Builders. So it’s no surprise that Withers applied that same careful attention to detail to the 1950s ranch house that he and his wife, interior designer Paula Cohen, remodeled into a graceful family home.

The couple was initially drawn to the home’s spacious yard, large trees and established Denver neighborhood, rather than to the house itself. But it grew on them—and with them—as they lived there for the next two years, gradually making multiple design revisions along the way. “The renovation is an amalgamation of things we’ve both done,” says Withers. And this capable and creative pair doesn’t shy away from a challenge: The couple took the house down to the studs, moved walls, added 1,200 square feet and a similarly sized basement, and then literally raised the roof. “We lifted the walls and roof and added bigger windows to create a more balanced scale,” Withers explains. Then, they applied a mortar wash to the original brick exterior and added new landscaping to up the home’s curb appeal.

Inside, the architectural alterations allowed more natural light to flood the house and create a greater feeling of spaciousness. “The driving factor of the design is a 60-foot-long great room that encompasses a mudroom, kitchen, dining and living area,” says Withers. The open room flows outdoors to covered patios through a series of arched French doors, further expanding the family’s living space. “We grill year-round,” Cohen says, “And when the weather is nice, we eat dinner outside—spring, summer and fall.”

Inspired by the ease of country houses they admired during their travels in Europe, the homeowners embraced the same warmth of old materials and spirit of simplicity when it came time to design their own home. Cohen explains, “We wanted the house to feel like it has been here forever.” To that end, they chose 200-year-old reclaimed ceiling beams in the kitchen, antique limestone and rustic wide-plank oak flooring and color-integrated plaster walls. Each room boasts a different style of ceiling—tray, coffered or barrel vault. Cohen designed all the doors and millwork herself; from the stained wood built-in shelves of the library/dining room to the fanciful, curved cubbies of the mudroom. She carefully selected simple, elegant light fixtures with candelabra bulbs, eschewing can lights as too modern-looking. “Some call it European country farmhouse style,” says Withers. “We just call it ‘Paula.’”

The furnishings are a combination of antiques from Cohen’s grandmother, pieces acquired over the years and new items. “I tend to have an eclectic style and like to mix it up a little,” she says, referring to the living room’s juxtaposition of elegant and rustic finishes and the variety of great room dining chairs, which range from stained and painted wood to upholstered fabric.

The couple had worked together on a handful of projects in the past—in fact, they met working on a client’s home together—but both agree that renovating their own home, top to bottom, has been both an eye-opening experience and a true labor of love. “Our house is a cozy, warm and inviting space,” Withers concludes. “I’m happy every day when I come home.” 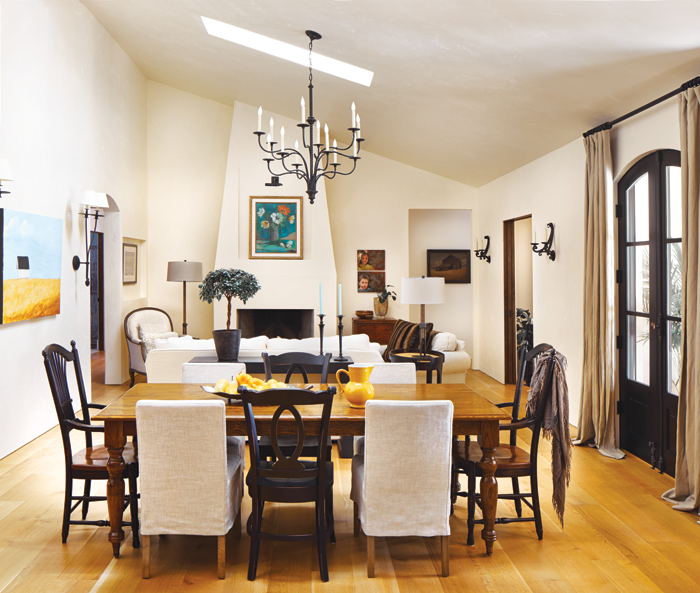 The living space in Chris Withers’ and Paula Cohen’s 4,500-square-foot house opens to the outside through double French doors. The room features clean lines, a simple vaulted ceiling, wrought iron light fixtures and a pleasing mix of furnishings. 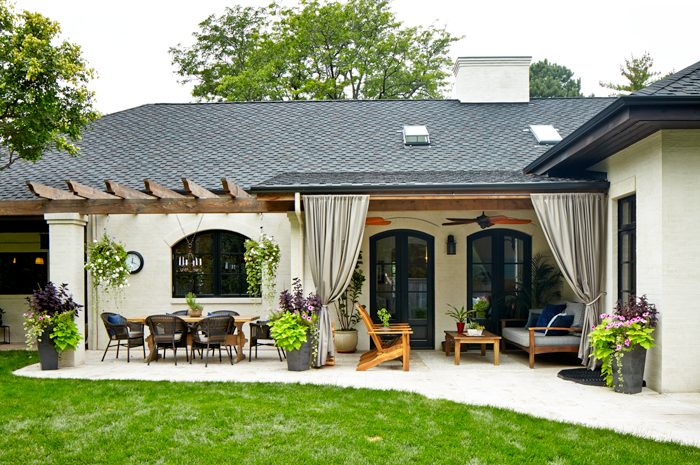 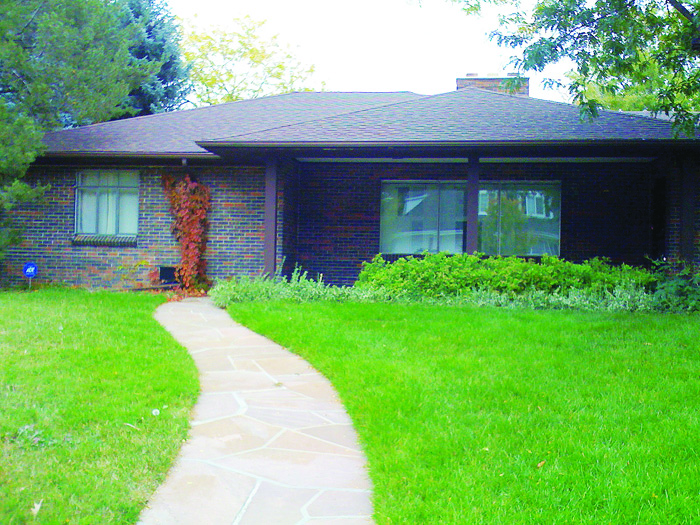 The home's exterior before the renovation. 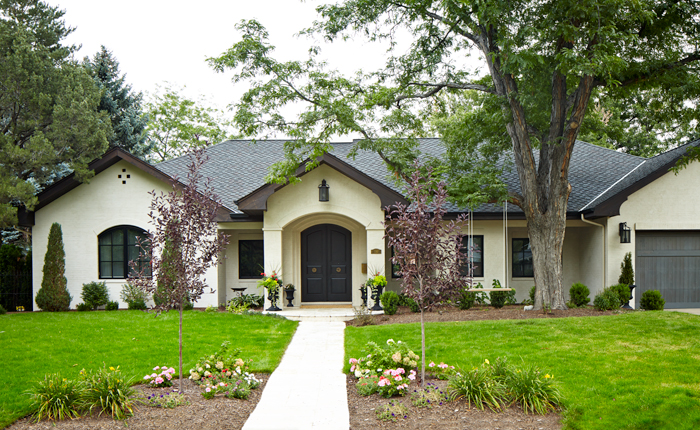 A new façade and raised roof add a sense of graciousness to the Denver house. The mortar-washed brick and the cyprus-centric landscaping are a nod to European country homes. The front door was inspired by a 14th-century Italian farmhouse. 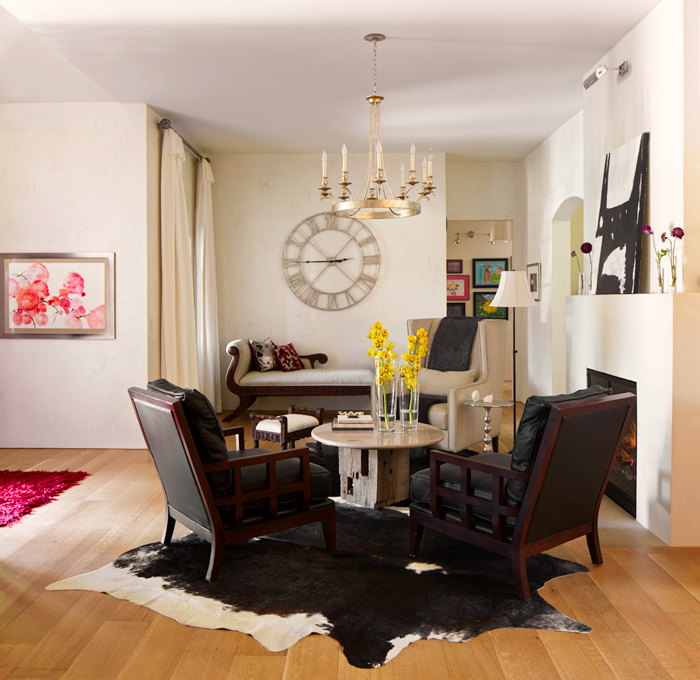 Cohen furnished the living room (or “parlor,” as she prefers) in her eclectic style, with a mix of seating styles and a table base made from the home’s leftover kitchen beams and topped with marble. The silver-leaf chandelier has moved from room to room. “When you live with a designer, things tend to be dynamic,” Withers notes. 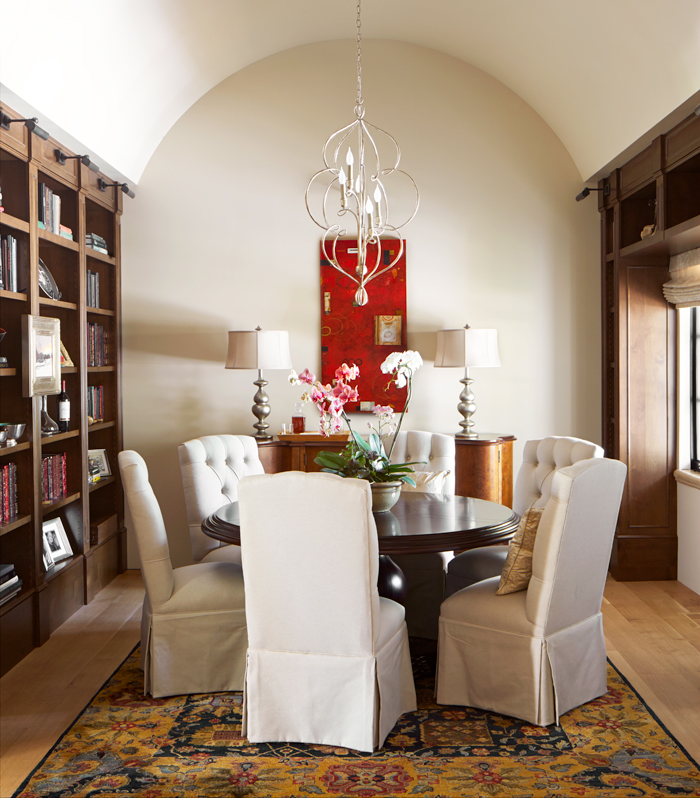 A barrel-vaulted ceiling and a silver-leaf iron chandelier are the crowning glory of the dual-purpose dining room/library. “Paula designed the alder shelving that wraps the room, Mitch (Clark) built it and brought it over in about 300 pieces and I put it together,” says Withers, who did much of the construction work on the house. 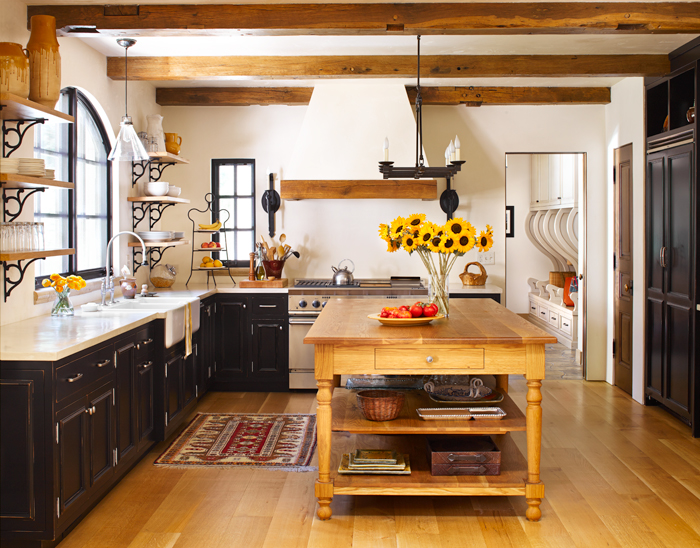 Sanded and stained 200-year-old reclaimed wood beams and open shelving give the kitchen a hearth-room coziness. Cohen designed the island to look like an 18th-century farm table. Its honey oak color contrasts with distressed black cabinetry and hand-troweled concrete countertops. Light pours into the room through a large arched window above the farm sink. 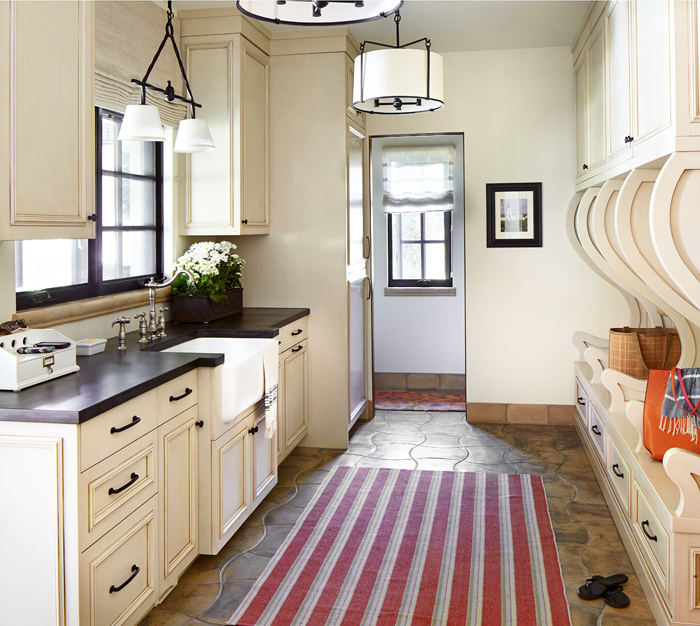 Dramatic curved cubbies  add whimsy and personality to the mudroom/laundry room, where each family member has plenty of storage space. Concrete floor tiles echo the curves. The washer/dryer are hidden behind tall cabinet doors. Cohen also custom designed the pendant light over the sink. 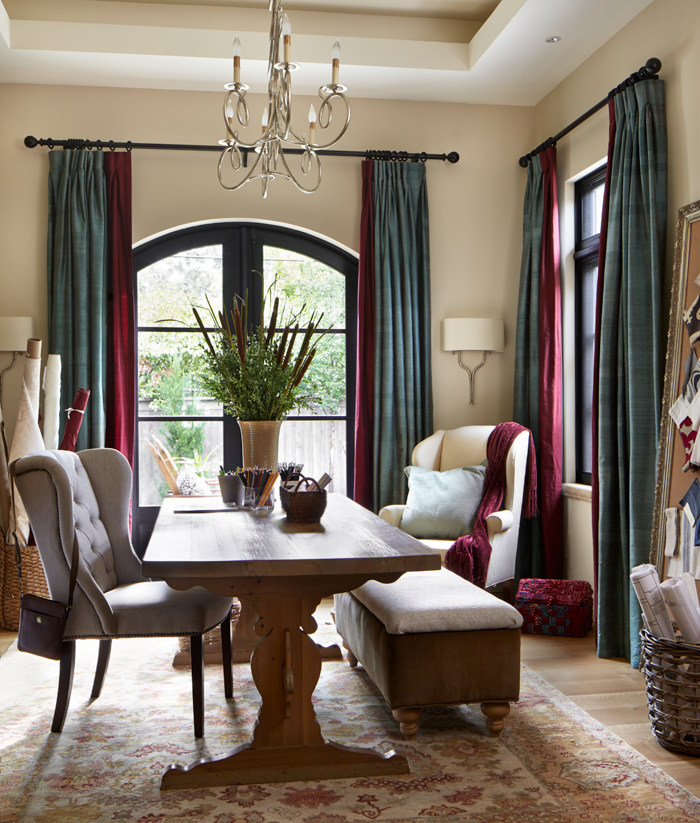 Rich colors and a restrained elegance reign in Cohen’s office, where a trestle table fills in for a desk. She found the antique silk drapery fabric at a Paris flea market. French doors lead to the large back yard. 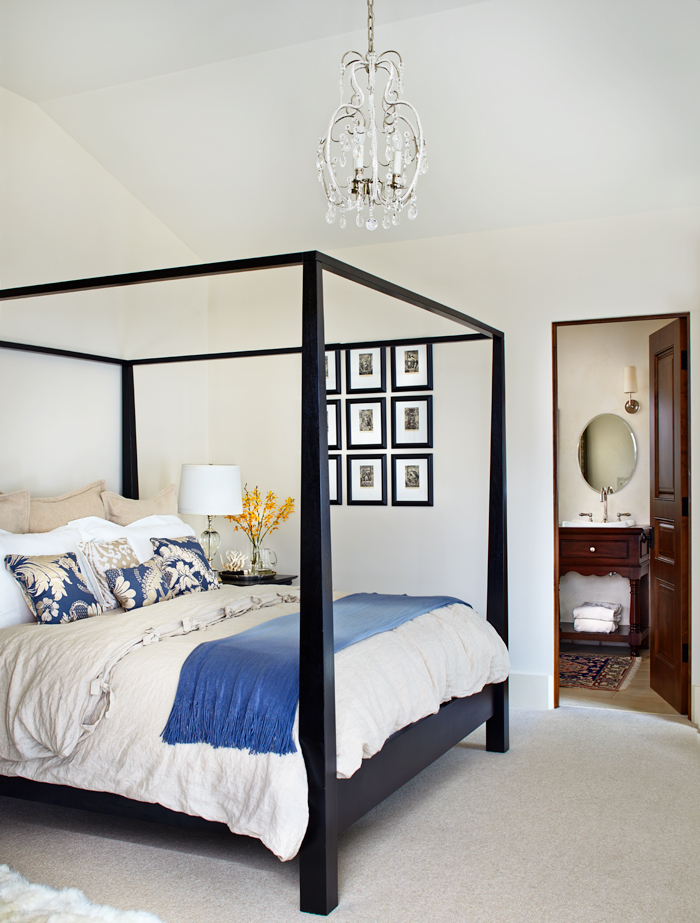 “I love the simplicity of a clean-lined four poster bed,” says Cohen, who dressed the bed in antique linens and a pop of French blue. A silver and crystal chandelier hangs from the high tray ceiling. 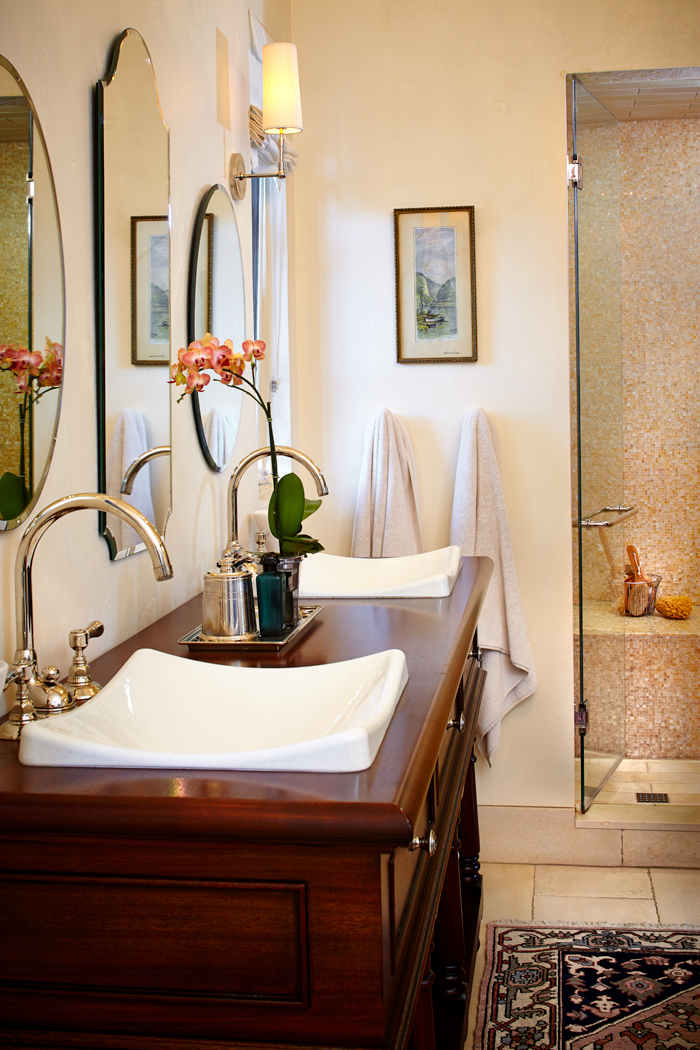 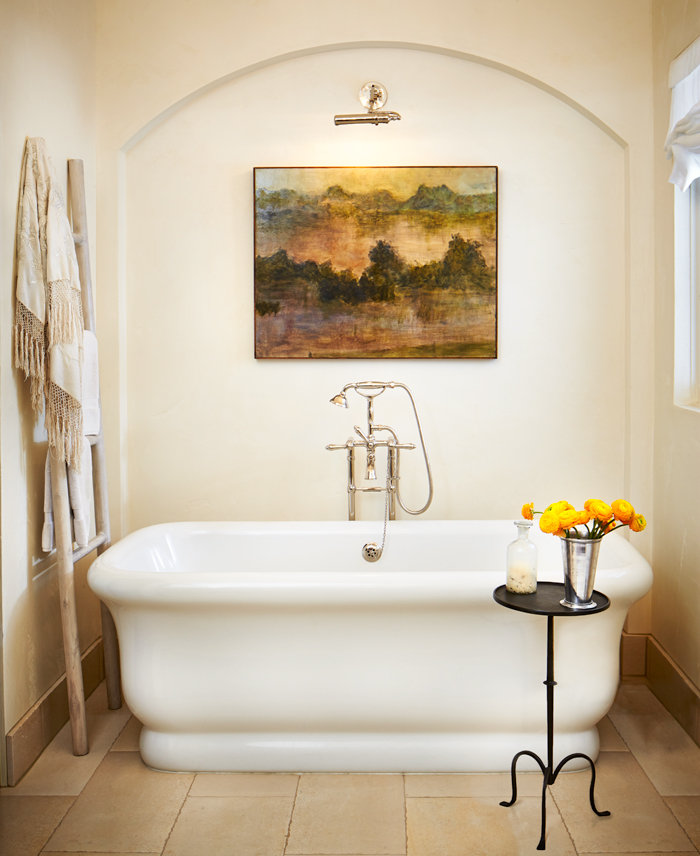 Old-World style abounds in the master bath, from the freestanding tub, floor-mounted bath filler and telephone shower, to the arched wall and dreamy, ethereal landscape painting.

See also:
The Renovation of a Century-Old Denver Bungalow
A Renovated Retreat